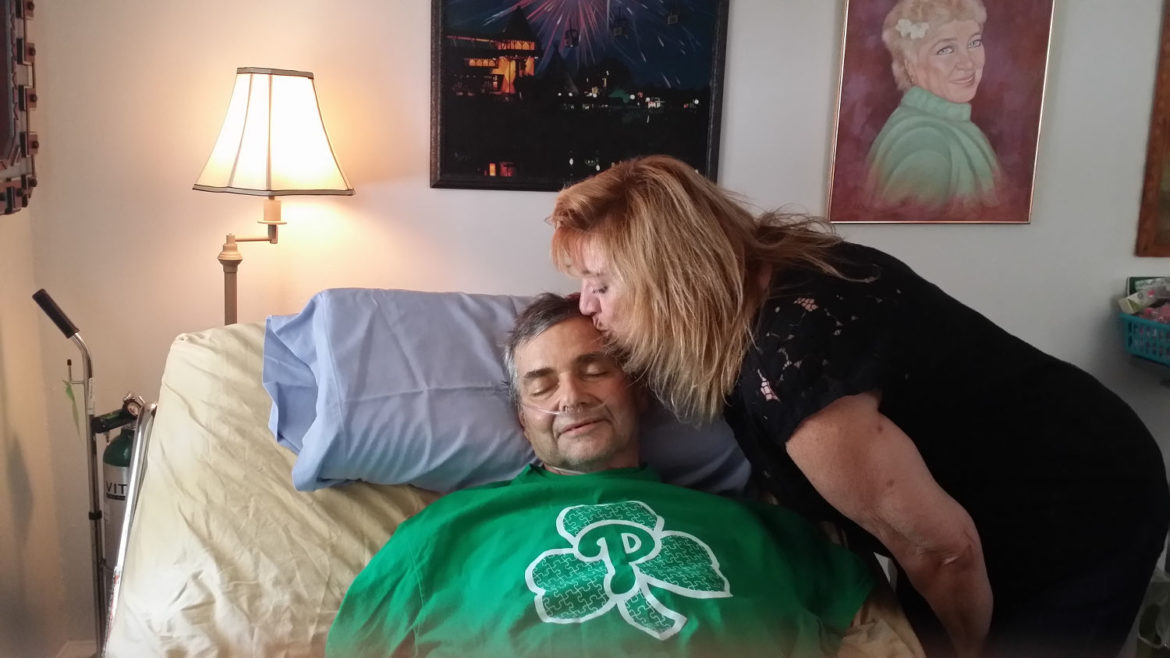 Leon Jesse James was supposed to die in prison.

As a convicted murderer, Pennsylvania gave him no possibility of parole, meaning he’d spend nearly his entire adult life incarcerated for a 1971 fatal shooting in Philadelphia.

Barely 18 at the time, he was angry and immature. Over four decades, his family watched him grow up and then grow old in prisons across Pennsylvania. The anger faded, but its consequences remained, leaving little hope that he’d ever return home.

Strangely, that changed when he could no longer walk.

“He couldn’t even tie his own shoes,” said his sister Anna Garrity, describing his rapid deterioration last year from pancreatic cancer.

Cancer meant his mandatory life term was nearly over.

But losing his mobility made him a potential candidate to live his final days outside prison, and, with a judge’s blessing, he became one of only nine inmates since 2010 to be granted a compassionate release from the Pennsylvania state prison system.

Contrast this with the federal system — itself widely criticized for being slow-moving and inconsistent — which approved 101 releases nationally in 2014 alone and includes much broader criteria for release.

Reform advocates say Pennsylvania’s law is so strict that compassionate releases almost never happen, even when inmates qualify. The burden almost always rests on families to petition for release, not prison staff who see daily evidence of an inmate’s decline.

Opponents, however, say the statute puts offenders’ rights ahead of victims who were promised justice by the commonwealth.

Inmates must show a judge that they are sufficiently near death, that they can receive better care outside prison and are “not ambulatory.”

That means they can’t walk — or, more strictly, are essentially bed-ridden. The requirement can disqualify sick inmates who still can walk, even if they are clearly dying.

The “not ambulatory” criteria is not included in a separate part of the law pertaining to inmates seeking outside care at a hospital or nursing home.

But it was a major hurdle for James, who wanted to die under home hospice care.

After more than 40 years in prison, James was diagnosed with pancreatic cancer in November 2013. It soon spread to his bones, stomach and colon, and he knew he was dying, despite surgery and radiation treatments.

Six months passed before James seemed to fit the “not ambulatory” requirement.

The process is a waiting game. And with death looming, time is always running out.

“All the miracles have to line up,” said Peter Goldberger, the family’s lawyer.

By late June 2014, Goldberger filed a petition in state court, laying out specifically that James could not walk without falling and that prison exacerbates the pain of his illness because he has to be shackled to receive treatment and would be sent far from his family to receive chemotherapy that would only briefly extend his life.

The case got attention, Goldberger said, because he called the judge’s chambers himself and explained the urgency.

His four sisters took turns staying with him in the living room, dropping everything to care for the brother who’d been incarcerated almost all their lives.

James’ sister Peggy Garrity said it felt like they were kids again.

“We took care of him and guided him into his next life,” she said.

James demanded the TV be moved out of the living room. He’d seen enough of that behind bars.

Licensed hospice care was provided, as required under the statute, but the sisters said they gave most of the care. Brushing his teeth, bathing him, shaving him, changing the sheets.

He had four or five good days, Peggy said. He could joke and stay awake for longer periods.

And then he got sicker and sicker.

On July 27, a Sunday morning, James started gasping for breath. Anna said it looked like he was falling asleep, and he died. Not in Graterford prison, but in his mother’s home.

“She lost him as a young man,” Peggy said. “To get him home meant everything for her.”

Judge Lerner said James, an elderly, dying inmate, was exactly the type of person the statute was intended to cover.

With almost no exceptions, the state’s 5,300 lifers will all die in prison — as will many other elderly and sick inmates who won’t outlive their punishment.

After the James case, Goldberger said he tried to secure releases for two inmates who died before he could even gather the needed paperwork.

James was one of three state inmates granted compassionate release last year, according to the Department of Corrections. One inmate was released this year, a department spokesperson said Friday.

He was convicted of rape in 1993 as well as aggravated assault in a separate case.

Thompson faced two to four decades in prison, but unlike James, his sentence could allow him to eventually return to society. That seemed unlikely when he was suddenly diagnosed with liver cancer in April 2014.

While incarcerated, he fell in love with Brenda Caley after she answered his newspaper ad. The two were married, then divorced. But they stayed in contact through letters and phone calls.

As Thompson suffered, it was up to Caley to arrange paperwork for his release, and to wait, knowing he might die before that happened.

“I just felt like I was banging my head against the wall trying to get everything that needed to happen for him to get released,” Caley said.

Court-appointed lawyer Cayla Amsley was able to show the judge that Thompson was confined to a wheelchair and that his doctor agreed he was in grave condition.

Thompson, who thinks his cancer should have been discovered much sooner, thought he’d die by Thanksgiving. Then by Christmas.

But he’s outlived the prison’s prognosis and is in hospice care at Caley’s Chester County home, still in constant pain, under close monitoring as his condition worsens.

Caley said it’s the first time in her life she hasn’t felt lonely. They were married three years but never lived together until now.

“The reason I think I’m alive right this very minute is I’m in an environment where I’m cared about,” Thompson told PublicSource in February.

The Department of Corrections, which does not make release decisions, didn’t oppose Thompson’s petition but said in a court filing that he “ambulates short distances” without a wheelchair.

A filing from Victim Witness Services in Franklin County said one victim contacted was “strongly opposed” to his release.

Jennifer Storm, the state’s victim advocate, said compassionate release is inherently unfair because it puts an offender’s comfort first and can make victims fear for their safety.

“It’s like a betrayal for the victim,” Storm said.

Does your imprisoned loved one qualify for compassionate release?

To be released to an outside hospital or nursing facility, an inmate must show a judge:

To be released to outside hospice care (including at home), an inmate must show a judge:

Decisions are made solely by a judge (either the same judge who sentenced the inmate or another judge in that district).

Read the full statute for complete criteria, which is different for inmates seeking hospital or nursing care and for those seeking hospice care. A primer on the law is available from the Pennsylvania Institutional Law Project.

Judge Herman said barring an inmate from care that ensures a merciful death because of their crime or record in prison starts to “eat at the fringes of Eighth Amendment cruel and unusual punishment.”

Thompson said he wouldn’t expect victims to support compassionate release, but he wants the inmates’ families to be taken into consideration.

“These guys got mothers, fathers, wives, sisters, brothers that ain’t never broke a law who love them,” said Thompson, who thinks several of his fellow inmates should have been released.

Goldberger said he thinks the department should actively encourage compassionate release and create a policy that implements the statute so inmates don’t need a lawyer.

“Otherwise, only the people with the most articulate, aggressive and demanding family members have a chance,” he said.

James had already filed a petition without Goldberger’s help in early June 2014. It was not docketed until his release was granted and was still pending at the time of his death.

Thompson had also filed himself before his successful petition.

However, Julia Hall, a criminologist and gerontologist at Drexel University, said she believes the change made compassionate release more difficult.

This is despite recommendations by a bipartisan legislative task force, which she served on, to reduce barriers in the previous law.

But things could be different.

Hall points to California’s embrace of medical parole, which is distinct from compassionate release, and requires that eligible inmates deemed medically incapacitated by the prison physician be released on parole, regardless of life expectancy.

The program, which has been expanded to ease overcrowding, does not apply to inmates serving life without parole. California allows parole for some lifers, while Pennsylvania does not.

Additionally, the federal compassionate release policy, which PublicSource examined earlier this year, has much broader criteria for inmates who might qualify and allows the release of inmates who are elderly, even if they are not at death’s door.

That system has been broadly criticized as inefficient, but by comparison, Wetzel acknowledges that the state system is “not a real mechanism” to get the elderly and dying out of prison.

Instead, thousands of prisoners are destined to sicken and die in prison, even if they could be eligible for release.

“It doesn’t take a rocket scientist or a bureaucrat to identify anybody,” said Melchiondo. “Just ask an inmate, ‘Who is dying today?’ and they’ll tell you.”