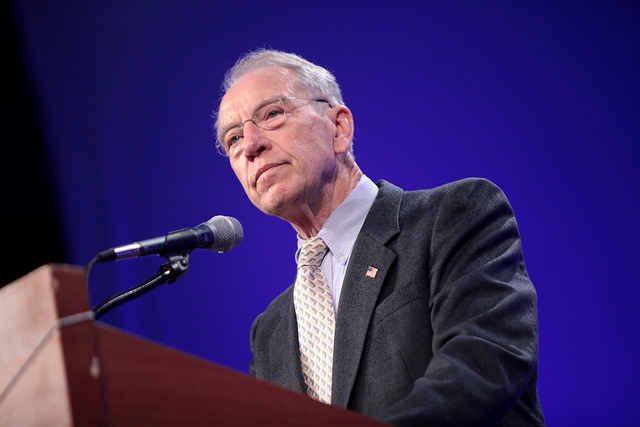 A Senate plan for prison reform was announced Thursday by unusual bipartisan allies.

If passed — and it’s a big if — the bill would allow judges more discretion in handing out sentences for some drug crimes and put greater emphasis on reentry efforts for inmates already serving time.

Reform advocates complain that the justice system is sending inmates to expensive and overcrowded prisons to serve long terms without improving public safety. Opponents fear more lenient sentencing will speed the return of unreformed criminals back to the community.

Among reform supporters is Sen. Charles Grassley (R-Iowa), previously a big obstacle in the fight to reduce mandatory minimum sentences.

From the National Journal:

“The myth is that there are thou­sands of low-level drug of­fend­ers, like people smoking marijuana, in fed­er­al pris­on for long terms. This is sup­posed to mean a waste of fed­er­al tax dol­lars, over­crowding, and un­fair­ness to people who should not be in pris­on,” Grass­ley said on the floor. “These myths are of­ten used to jus­ti­fy le­ni­ent and, frankly, dan­ger­ous sen­ten­cing pro­pos­als in this body. One of those pro­pos­als is the so-called Smarter Sen­ten­cing Act.”

After negotiations, Grassley was satisfied that the Senate plan wouldn’t lead to an across-the-board cut in sentences, especially for more serious drug offenders, which is still a major concern of his.

On Saturday, the Des Moines Register ran an op-ed from Grassley on the Sentencing Reform and Corrections Act of 2015, the bill he introduced with Sen. Patrick Leahy (D-Vt.).

His column starts by invoking Moses and Pope Francis and how justice systems have evolved from Hammurabi’s code of an “eye for an eye” to the 21st century.

“There’s no doubt that drug and human trafficking and gang-related crimes continue to persist and poison the well of civic life, endangering public safety daily…” Grassley’s column said. “The right policy mix of reforms can give low-level offenders who have paid their debts to society a second chance to rejoin their families and find employment in their communities.”

Grassley’s support does not guarantee the plan gets passed or even put up to a vote.

For one thing, Congress has not been quick to act on anything, and regardless of action in the Senate, any reform plan will need House support.

From the Los Angeles Times:

Yet even though the measure is seen as the most hopeful in the House at this point, it has yet to be given a hearing before the House Judiciary Committee, where the chairman, Rep. Robert W. Goodlatte (R-Va.), has been given the go-ahead by the House GOP leadership to develop his own plan.

One Capitol Hill source said sentencing changes may not make it out of the House until next year, if then, and then it would have to be reconciled with various Senate versions under discussion, including the latest proposal.