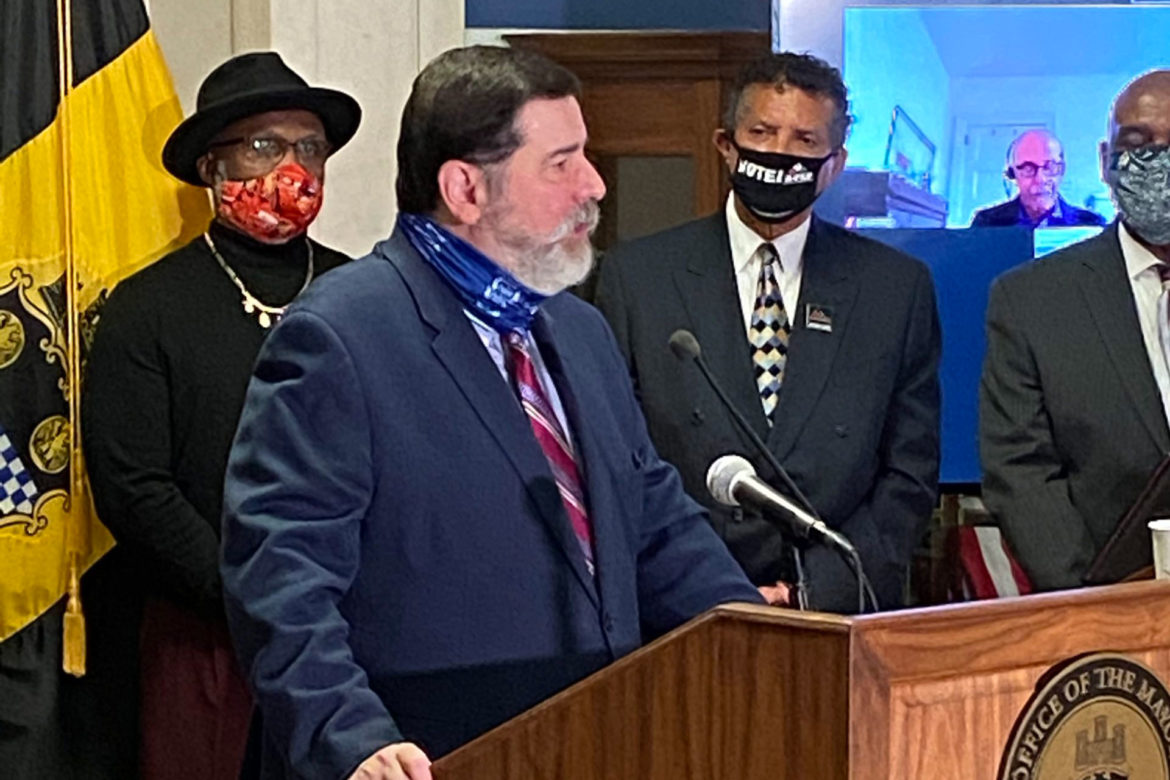 Pittsburgh Mayor Bill Peduto (center) stands with two members of his Pittsburgh Community Task Force for Police Reform, Richard Garland (left) and Tim Stevens, at the unveiling on Oct. 19, 2020, of the panel's report, at the City-County Building, Downtown. (Photo by Rich Lord/PublicSource)

Pittsburgh Mayor Bill Peduto and his hand-picked task force released 16 recommendations for reforming policing on Monday, as the mayor pledged to consider them all and to start implementing data-related measures promptly.

comes nearly five months after the death of George Floyd, under the knee of a Minneapolis police officer, set off a summer of protests and reignited concern with police use of force, especially against Black people.

10 big problems with policing, and approaches to addressing them

The mayor called the 47-page report “a baseline” for improving policing in the city.

“We’re at a very historic moment in this country,” Peduto said at a press conference in the City-County Building. “And there has never been a time like this, since the late 1960s, in order to address systemic racism, and in all the different areas that we can see it, whether it’s through education, or access to healthcare, or housing, or whether it is in police brutality.”

Most members of the task force addressed questions at the press conference, and several admitted that they couldn’t get the data they wanted to really understand some aspects of police activity.

One example: “The number of traffic stops, and who was stopped, and how many people — not just the driver. Were there passengers?” said Valerie McDonald Roberts, a co-chair of the task force. “Why don’t we have a little more data on that?"

The bureau releases data annually that shows, among other things, that Black motorists are more likely than white motorists to be pulled over for alleged traffic violations. 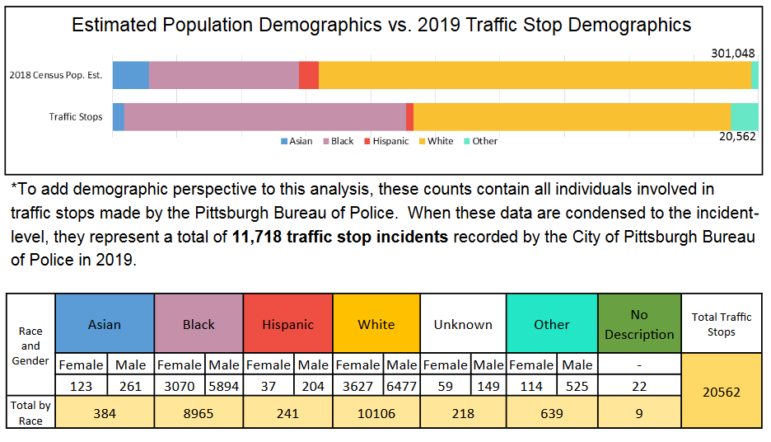 An excerpt from the Pittsburgh Bureau of Police 2019 annual report, showing traffic stops by race, compared to the demographics of the city's population as a whole.

Task force members noted, though, that the available data doesn’t allow them to definitively say whether that is due to racial bias or other factors, like the prevalence of police in some neighborhoods compared to others.

“We don’t have that type of information available to make better decisions within the Bureau of Police,” Peduto said. Improved data collection is “something that will begin today.”

No members of the bureau were represented at the press conference.

Like many mayors, Peduto has faced pressure from activists and persistent protests demanding changes to police policies, practices and budgets. The mayor has argued that he has made improvements, but that his powers are constrained by state law and the city’s contract with the Fraternal Order of Police.

Peduto named his task force on June 17. It has been led by Quintin Bullock, president of the Community College of Allegheny County, and McDonald Roberts, who has had multiple government roles including city council member, Allegheny County Recorder of Deeds, and chief of the city’s Bureau of Neighborhood Empowerment.

The 15-member panel was charged with developing what Peduto then called “people-oriented solutions that make Pittsburgh a better place for all, especially in our black communities.”

Over roughly a decade, the city has paid nearly $6.7 million to settle lawsuits lodged in federal court alleging excessive use of force by police. PublicSource on Oct. 15 published an exploration of 10 big problems with policing and alternative approaches which have been tried elsewhere or proposed here.

Task force member Tim Stevens, chairman and CEO of the Black Political Empowerment Project, expressed pride in the younger people protesting in the streets “for providing the prodding to all of us.”

“My hope is that our city will give a moment to the mayor and his staff to review how these in-depth recommendations can in fact be implemented on a permanent basis, so that we have permanent change.”