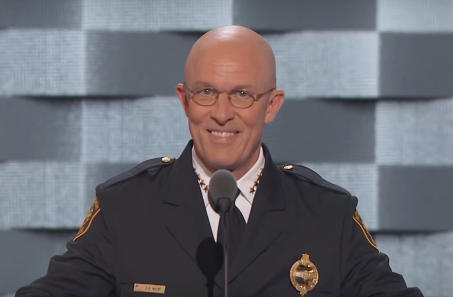 When Cameron McLay came to Pittsburgh as police chief, his predecessor was in federal prison.

Officers were retiring in droves. Morale was dismal. Relations with the community were badly frayed, as they had been for many years, with wounds still unhealed after a federal oversight to prevent biased policing ended almost 10 years earlier.

McLay was recruited to solve that, and to reform Pittsburgh’s Bureau of Police into a model of modern policing, where community trust was well-earned and where police work was based on data and transparency.

Two years later, with much accomplished, and much to be done, he’s leaving.

At a surprise news conference Friday morning, McLay addressed rumors of his departure by confirming them and saying he’d accomplished everything he thought he could.

“The least important person in all of this is me,” McLay said. “It’s about the community. It’s about the organization. I made the decision that now I’ve done as much as I can.”

But many who watched McLay’s tenure saw his outside influence as crucial. They’re hopeful his philosophy will endure under Acting Chief Scott Schubert, an internal replacement being given a shot at the permanent job. But they acknowledge uncertainty and concern that the department will slip backward.

As an outsider, McLay was a breath of fresh air for some and a smack in the face for others.

He ignited officers of the police union just months after he was hired because he was photographed with a sign that read, “I pledge to challenge racism at work #EndWhiteSilence.” The photo was taken at a New Year’s Eve celebration downtown.

Some thought McLay “got it” and understood Pittsburgh’s struggles with race relations. But others saw him as too radical.

For the short time he was here, McLay advocated for diversifying the police force and got the bureau selected for a national pilot program to improve police training. At the University of Pittsburgh last September, McLay said all of his officers would complete training on how to recognize their own unconscious biases, how to be fair when resolving disputes and how to work to mend race relations by 2017.

Pittinger appreciated McLay. The chief has done a remarkable job in just two years, she said, changing an insular and secretive internal culture and for making huge strides in community relations.

Whether those changes last is a question, but she thinks the leaders McLay has empowered will press ahead.

“That apparatus is fragile right now,” Pittinger said of the reforms. “But I think it’s strong enough that it can endure.”

Among the issues bogging down McLay’s tenure was pushback from the police union over his primetime speech in uniform at the Democratic National Convention.

The Police Review Board investigated and recently said the appearance seemed to violate local rules and federal law against influencing elections. Pittinger had no comment today on the investigation.

McLay said he regrets wearing his uniform during the speech because the controversy overshadowed his message of healing between police and residents. He doesn’t regret the speech.

His last day in the office will be Election Day, and then he’ll return to his family in Wisconsin. He said he’s not leaving for another chief’s job.

The Fraternal Order of the Police Lodge No. 1, the city’s police union, also recently announced a no-confidence vote in the chief.

“The FOP fought him every step of the way,” said Richard Garland, an anti-violence activist and member of the search committee that recruited McLay.

Union President Robert Swartzwelder, who has intensely criticized McLay, said Friday that the chief did not spend enough time focusing on his officers.

Tim Stevens, founder of the Black Political Empowerment Project, called the sudden news of McLay leaving a “tragedy for the city of Pittsburgh.”

Mayor Bill Peduto, who dispelled rumors of the chief’s departure yesterday, praised McLay’s accomplishments Friday and said he knew from the start that Pittsburgh wouldn’t have McLay for very long.

The average tenure for a chief, McLay said at his hiring, is three years.

“I’d love to have him for another year,” the mayor said. “But there are other things in Chief McLay’s future.”

Now, Peduto is putting his trust in Schubert, a 24-year-veteran. If he passes a 90-day evaluation period, Peduto said the chief job will be his.

Schubert was previously an assistant chief and joined the department in 1992 as a patrolman.

He's been at the bureau during some of its darker times, including when the bureau operated under consent decree over biased policing and the tumultuous period after the former chief resigned and was sentenced to federal prison for corruption.

Through those years, diversity also dropped, a problem McLay said he’s frustrated with not having fixed.

The new acting chief said he will push forward with McLay’s philosophy.

Swartzwelder views Schubert as a good police officer but said his success as chief will depend on his ability to follow the officers' contract.

He praised Peduto for filling the position internally rather than rushing to conduct a national search and bring in another outsider.

"Maybe the mayor is being a little more careful this time – ‘Let’s see what we can do with my own backyard,’” Swartzwelder said.

McLay said he is confident in the leaders he has empowered and wanted to step aside to let them rebuild after he came in as a force of change. Peduto said it is time for an internal leader to head the department.

Garland described Schubert as “a good guy,” but he worries he’ll face the same resistance as McLay.

“Can he change all the different things that’s been going on?” Garland asked. “Or are we going to get the same ol’, same ol’?”

David Harris, a University of Pittsburgh law professor and member of the committee that helped hire McLay, said the onus is on Peduto and other city officials to ensure that McLay’s reforms continue. The nation’s eyes are on Pittsburgh to do so, he said.

The difference between former Chief Nathan Harper, the felon, and McLay, the reformer, was so stark, Harris said, that Pittsburgh was starting to become seen as a city succeeding in healing race relations and making police officers protectors of communities again.

“I hope they support that program and those changes. I hope they don’t back away. You couldn’t do that and not have the whole country notice,” Harris said.

Larry Davis, a dean at the University of Pittsburgh who studies race and social problems, was floored by news of McLay’s departure, only hearing about it early Friday afternoon.

McLay was moving the city in a positive direction, he said, and had made significant efforts to improve race relations. Just last week, Davis said, he had called the chief and left a message, “just to show him support.”

“Not everyone is against him,” Davis said.

Pittsburgh under McLay’s command was a city pushing to recover from a long history of racial inequality.

Davis described McLay as a “pro-pro” type of person, a chief that was able to show he was pro-black people and pro-white people at the same time. Losing that, Davis said, will set the city back.

“This guy was the best here for mending those race relations,” Davis said. “I’m worried for the city. The city doesn’t need this.”