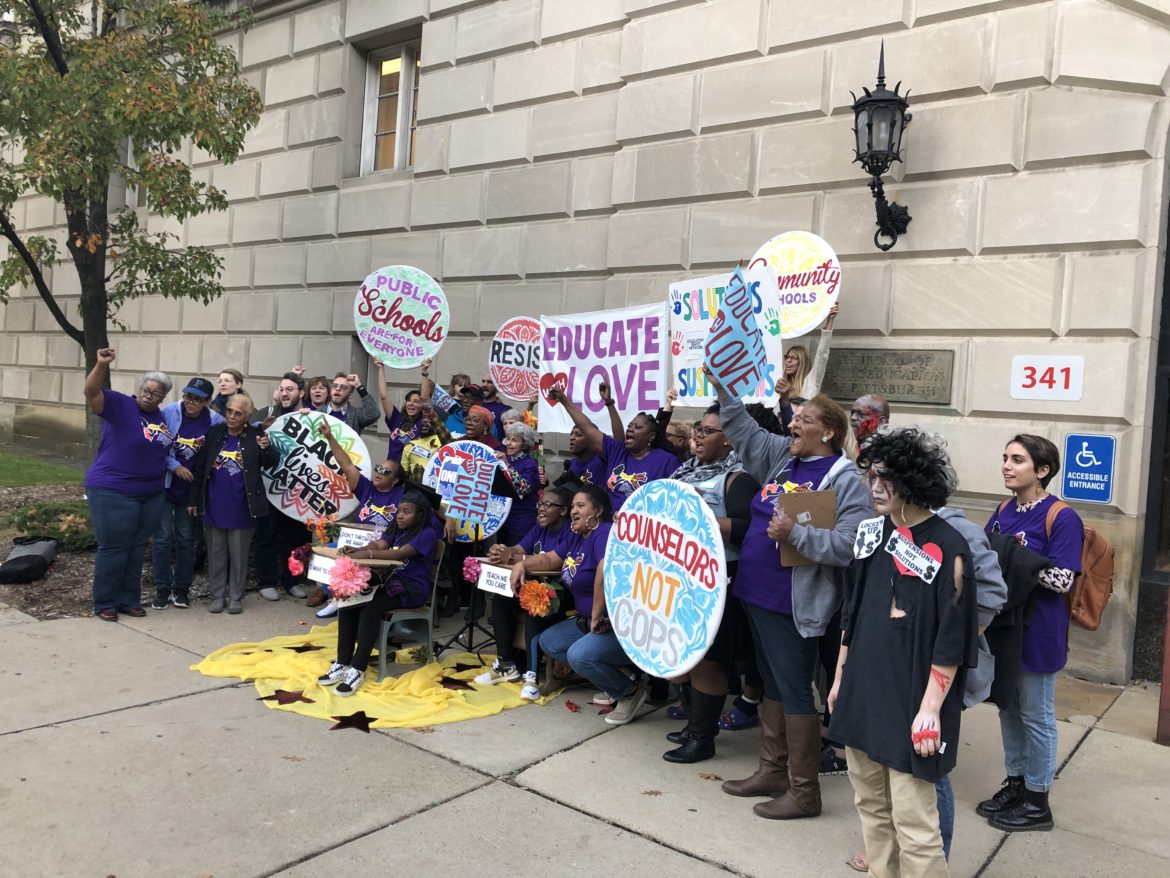 Representatives from social justice organizations Education Rights Network, One Pennsylvania and the ACLU of Pennsylvania rallied before the Pittsburgh Public Schools board meeting on Oct. 28. (Photo by Stephanie Hacke/PublicSource)

Parents and community activists say many changes still need to be made to a proposed memorandum of understanding between Pittsburgh Public Schools and city police to ensure the most vulnerable students’ rights are protected.

School board members decided at its Oct. 28 hearing to wait yet another month to vote on the agreement with city police that outlines how officers can respond to certain incidents on school property or at school-sponsored activities. The board now plans to take action later in November, following further board discussion at its Nov. 6 workshop meeting.

Representatives from social justice organizations Education Rights Network, One Pennsylvania and the ACLU of Pennsylvania rallied before the board’s Oct. 28 public hearing, demanding changes be made to the memorandum of understanding [MOU] before its passage. They also rallied to encourage the board to expand the district’s suspension ban for non-violent infractions for students in pre-K to second grade to now go through fifth grade.

Statistics show that Black students and students with disabilities are suspended at a disproportionate rate. Instead of suspension, the advocates and students present at the rally said they want to see services offered to help students.

“You have principals who are running little prisons. These principals are small representations of prison wardens,” Paulette Foster, co-founder of Education Rights Network, said during public comment. The organizations have gathered more than 750 signatures from people seeking to stop suspensions of children through fifth grade, she said.

While parents and community members said they are glad to see the ban from pre-K through second grade, they believe more needs to be done.

Angel Gober, Western Pennsylvania director of One Pennsylvania, said she plans to follow up with board members and the superintendent in the coming weeks in hopes of getting a policy drafted to extend the suspension ban.

Gober said she also wants to see a suspension working group reconvened to do a deep dive into the implementation of the suspension ban for pre-K through second grade to examine the services offered to students.

Parents and community groups also want their voices to be heard regarding the proposed MOU. While they were a part of a working group that gave recommendations for the agreement between Pittsburgh Public and city police, Gober said their recommendations were not implemented.

The MOU would define parameters for information sharing between the district and police, what incidents school officials must notify police regarding and what law enforcement response may involve, including taking a child into custody, notification of parents or guardians and reporting requirements.

Pennsylvania School Code requires that districts and municipalities have an MOU in place. The Pittsburgh district has been working without an agreement with city police since 2011.

The MOU was pulled from a vote in May and delayed again last month when a board member asked for another month to give the public time to comment.

Sticking points have included Pittsburgh police’s ability to arrest students in school for offenses committed in the past or off of school grounds.

“We need MOUs that limit the role of police and not facilitate it,” said Cheryl Kleiman, attorney with the Education Law Center.

Parents and community advocates said the MOU is written from the perspective of the police, not the students and parents.

“We are effectively handing over complete control of discipline to city police and trusting that they will do the right thing. Where do we draw the line?” said Ghadah Makoshi, parent and community advocate for the ACLU of Pennsylvania.

“As we all know, the people most impacted by this overreach are the people most marginalized. In the case of schools, these are Black and brown students and increasingly Black girls in particular, students with disabilities and LGBTQI students. It is our responsibility to protect our students’ rights and privacy and to draw that line,” Makoshi said.

Makoshi raised concerns that the MOU requires the school to notify law enforcement for a long list of offenses. One is when a disorderly person fails to disperse upon official order.

“This could mean something like a group of Black girls is taking a walk in the hallway and being asked to go somewhere else but do not,” she said. “So they would be considered disorderly and a failure to disperse, particularly when viewed through the lens of implicit bias and racism.”

Other concerns raised during public comment on Monday night included:

While the latest draft states that parents or guardians of a suspect must be contacted by law enforcement, the language reads that if they cannot be reached, “the school entity shall defer to the investigating law enforcement authority, which will protect the student suspect’s legal and constitutional rights as required by law.”

Gober said the organizations advocating for students provided board members with a list of “progressive MOU language that school districts have adopted across the country.”

“This is our opportunity to protect students and not overcriminalize them,” Gober said.