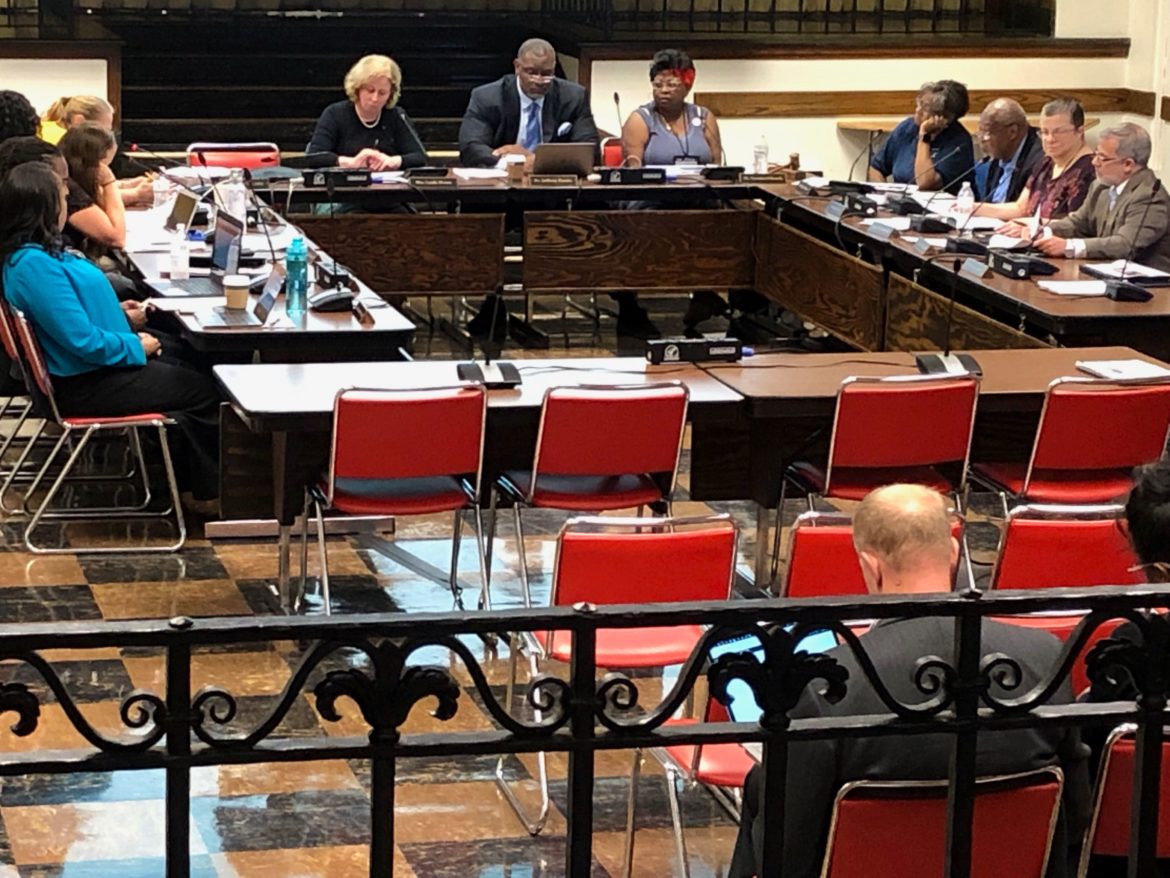 Pittsburgh school board members at a September meeting. (Photo by Mary Niederberger/PublicSource)

To address concerns from the community and Pittsburgh school board members, the latest draft of a memorandum of understanding between Pittsburgh Public Schools and city police specifies that law enforcement cannot conduct an investigation without first reaching a student’s parent or guardian.

The MOU has undergone numerous revisions over the last several months to address concerns from community and student groups, board members and the ACLU. School board members looked over the newest draft at their Oct. 23 agenda review meeting.

The board is set to vote Oct. 30 on the agreement between police and the district that is years in the making.

The agreement establishes procedures for how police can respond to certain incidents on school property or at school-sponsored activities. It does not cover incidents outside of the school setting and should “create no substantial disruption to the learning environment.”

The MOU defines parameters for information sharing between the two parties, what incidents school officials must notify city police regarding and what law enforcement response may involve, including taking a child into custody, notification of parents or guardians and reporting requirements.

Pennsylvania School Code requires that districts and municipalities have an MOU in place. The Pittsburgh district has been working without an agreement with city police since 2011.

“There are segments in the community that are very resistant to having city police in the building,” Weiss said. “But the reality is that there are circumstances where that becomes necessary.”

The MOU was pulled from a vote in May and delayed again last month when a board member asked for another month to give the public time to comment.

The issue of Pittsburgh police being permitted to arrest students in school for offenses committed in the past or off of school grounds had been a sticking point in negotiations over the MOU.

At the Oct. 23 meeting, board member Regina Holley said she, along with community members, had concerns with an earlier draft that would allow students to be interrogated without an adult present.

Weiss said that concern has been addressed in the latest draft, which also specifies that a school official cannot stand in place of a parent during an interview by law enforcement. If a parent or guardian cannot be reached, a child will not be questioned by police at that time.

Kevin Carter, first vice president of the board, questioned if the child could be taken into custody.

Weiss said that if the police department has a legal basis to take a child into custody, they can do so with or without a parent there.

School board members on Oct. 30 are also scheduled to vote on the authorization of grant applications, seeking roughly $1.8 million in funds from the Pennsylvania Commission on Crime and Delinquency to strengthen security, broaden staff capacity to respond during emergencies and reduce racial disparities with student discipline.

The grant applications seek money for added metal detectors, including for schools that currently do not have them, along with a new public address system for five schools, two-way radios, a partnership with the Association of Black Psychologists and implicit bias trainer certifications.

Holley emphasized that trauma-informed approaches and various supports are what other districts are doing to combat behavioral issues, rather than adding more equipment.

“I’m glad to see that we have, other than more equipment for safety, that we’re also looking for some human capital to come in and support our students as well,” she said.

Board member Sala Udin questioned if the district has done a survey recently of the schools that have and do not have metal detectors to determine their effectiveness, and if there should be more added or all taken out.

District leaders said they have not done a survey of that nature, but will conduct a research briefing to provide to the board.