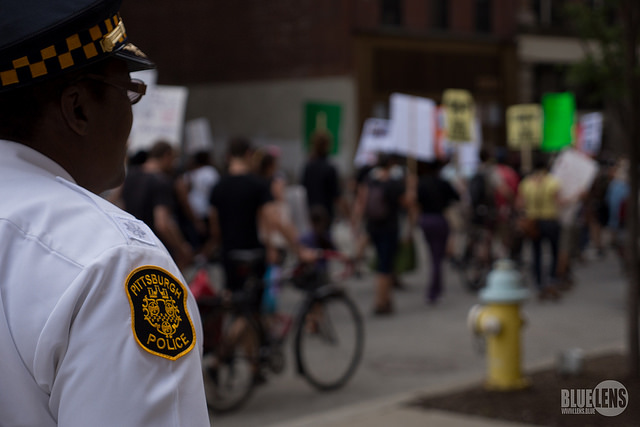 The Pittsburgh Fraternal Order of Police’s Twitter account does not have political aims, according to the union president, but his history of retweeting controversial opinions is catching up to him.

After two anti-Muslim retweets appeared on the Pittsburgh Fraternal Order of Police (FOP) Twitter page today, Reddit user TacticalJedi made a post on the popular Pittsburgh subreddit calling out the FOP.

Pittsburgh FOP President Howard McQuillan, whose first tweet from @foplodge1pgh was in late October 2015, told PublicSource he received an email about one of the tweets, which prompted him to delete it.

The tweet in question was a picture of three Middle Eastern men, one holding a knife, yelling into the camera, with a caption that reads: “We’re your new neighbors. “I probably just retweeted it and didn’t see what it was,” McQuillan said. “It was my error.”

McQuillan tweeted an apology Friday, saying he apologizes for the “rather offensive” tweet and understands why people were concerned.

The union president said he runs the Twitter account, which has 167 followers, with another member of the FOP who he declined to name, but McQuillan says he was the one who retweeted the picture last night.

Pittsburgh Mayor Bill Peduto has pledged this year to bring more immigrants and Syrian refugees into Pittsburgh, but McQuillan said the FOP has no formalized opinion on immigrants in Pittsburgh.

“It’s not something that should be affiliated with our Twitter account,” he said. “[It’s] not a police press story that relates to our message.”

He also said that he made the Twitter account to publicize positive stories about police officers in Pittsburgh and across the country and not for political reasons. But the account has repeatedly featured retweets opposing the Black Lives Matter movement and others with anti-Islamic sentiments.

The Pittsburgh FOP has criticized the city and Peduto’s office for not recognizing the work of police officers. In early January, the Pittsburgh FOP retweeted a Pittsburgh Post-Gazette story about an arrest of a shooter downtown, with a caption that reads: “Another opportunity to recognize the work of our Officers, but again nothing from the mayor & our admin.”

According to McQuillan, the Black Lives Matter movement is not an issue that the Pittsburgh FOP has any opinions about, and is not related to the city’s lack of support for police officers.

He said he’s still learning the ins and outs of Twitter, but he’s glad to see people paying attention.

“[We] just have to do a better job of seeing what we’re retweeting and going from there,” McQuillan said.