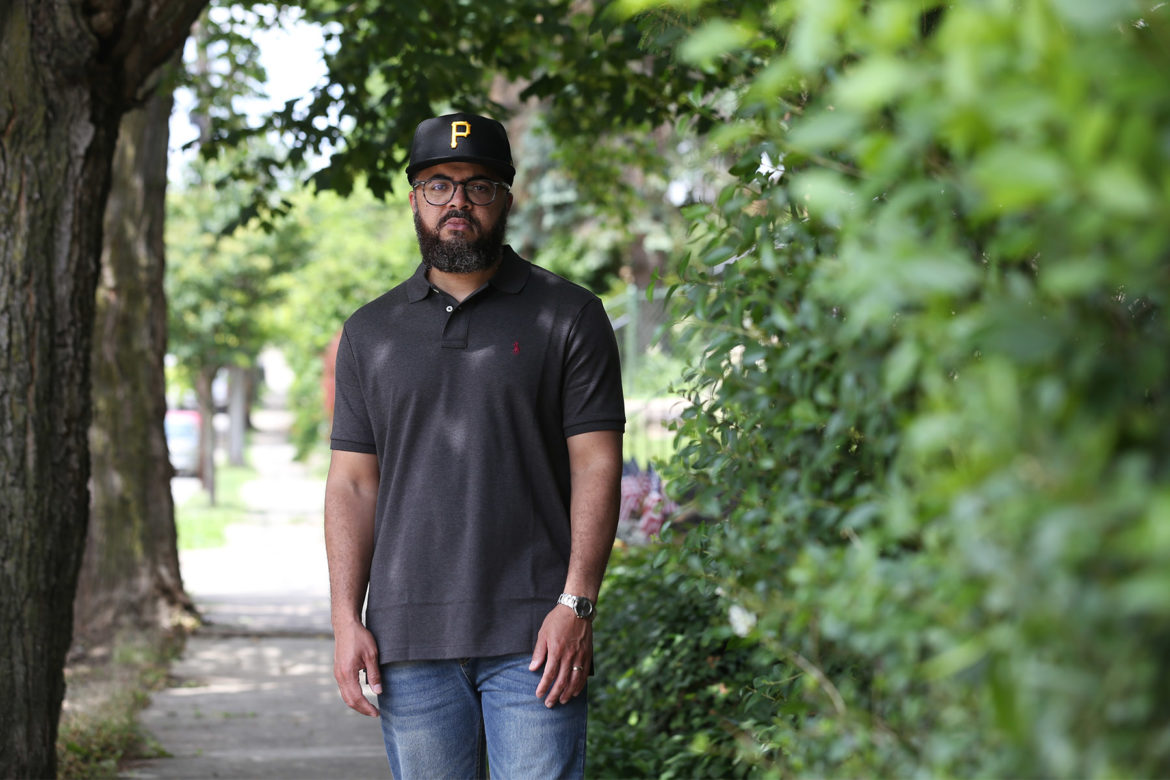 Julius Boatwright is the founder of Steel Smiling, an organization dedicated to Black mental health. (Photo by Ryan Loew/PublicSource)

Before the pandemic, society was already experiencing a mental health crisis. Now, it’s even worse. A surge in demand, combined with too few providers and high treatment costs, can make accessing services challenging.

Where traditional health systems are lagging, community groups are stepping in. From providing therapy to Black Pittsburghers and new parents to creating virtual community healing spaces, here’s how three Pittsburgh organizations are filling gaps in need.

Last spring, two and a half months into the pandemic and six days after a Minneapolis police officer murdered George Floyd, Julius Boatwright posted an offer on his personal Facebook page. If any Black person in Pittsburgh needed therapy but couldn’t pay, Steel Smiling would try to help. 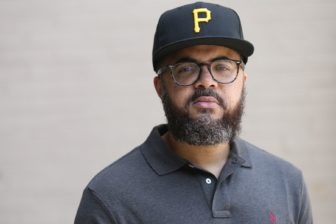 The post was shared over 500 times. Without prompting, donations started streaming on Steel Smiling’s GoFundMe page — ultimately raising over $120,000 for what is now the Black Mental Health Fund. Since then, the organization has received about 300 referrals, Boatwright estimates. Most are from Pittsburgh, though some reached out from across the United States and as far away as the Dominican Republic.

India Renae Hunter, then a graduate student at the University of Pittsburgh, was one of them. After struggling to find a therapist who accepts Medicaid, Hunter reached out to Steel Smiling last June. “From there, the process was really easy,” she said. By July, she was connected with a therapist through the Black Mental Health Fund. They now talk over the phone once a week. “She’s just been very helpful for me,” Hunter said.

The donations, plus support from several foundations*, have funded Steel Smiling’s work. But there is a challenge: Pittsburgh’s limited number of Black mental health professionals. “It’s great that more people are reaching out, but now there aren't enough Black therapists to meet the need,” Boatwright said. 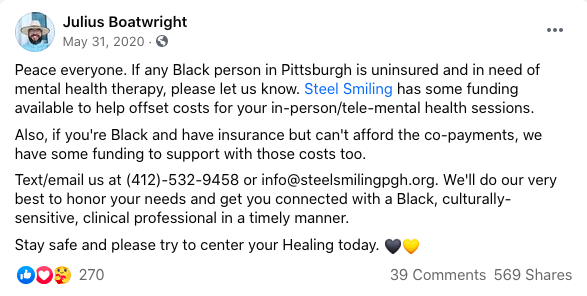 Wait times to connect with a therapist can vary from one week to up to three months. So last month, the organization launched a new program. During weekly pre-treatment experience sessions, individuals can learn about therapy, go to group support sessions or do activities like gardening and yoga. The goal is to provide support, free of charge, while people wait for services.

“We know it's not like you call in on Monday and you're in therapy on Tuesday,” Boatwright said.

From infertility to postpartum depression, having a child can be traumatic. Yet quality reproductive mental health services are often hard to access. Many providers aren’t trained in reproductive mental health and can be dismissive of families’ concerns, said Pittsburgh-based therapist Jodie Hnatkovich. Therapy can be expensive, even with insurance. And many families lack transportation and child care. 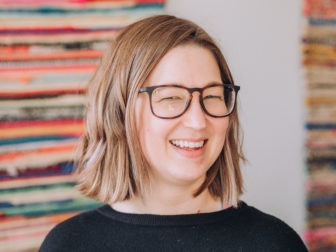 Jodie Hnatkovich, one of the founders of Forward Allies. (Courtesy photo)

That’s why in 2019, Hnatkovich and three of her peers founded Forward Allies for Equity in Mental and Reproductive Health, a nonprofit organization that trains providers in reproductive mental health and covers the cost of therapy, transportation and child care for families, using money from donations and training proceeds. So far, the organization has educated 25 providers and funded therapy for four families. “Taking care of families and parents with young children is so vital,” Hnatkovich said. “Mental health care for one family member impacts that family cycle for a lifetime.”

Throughout the eight-month training course for mental health providers, attendees are educated in topics such as systemic racism and allyship, LGBTQ parenthood and supporting postpartum families. The next cohort, to start in September, will be open to mental health providers as well as OB-GYNs, doulas and social workers — “any birth worker,” Hnatkovich said. 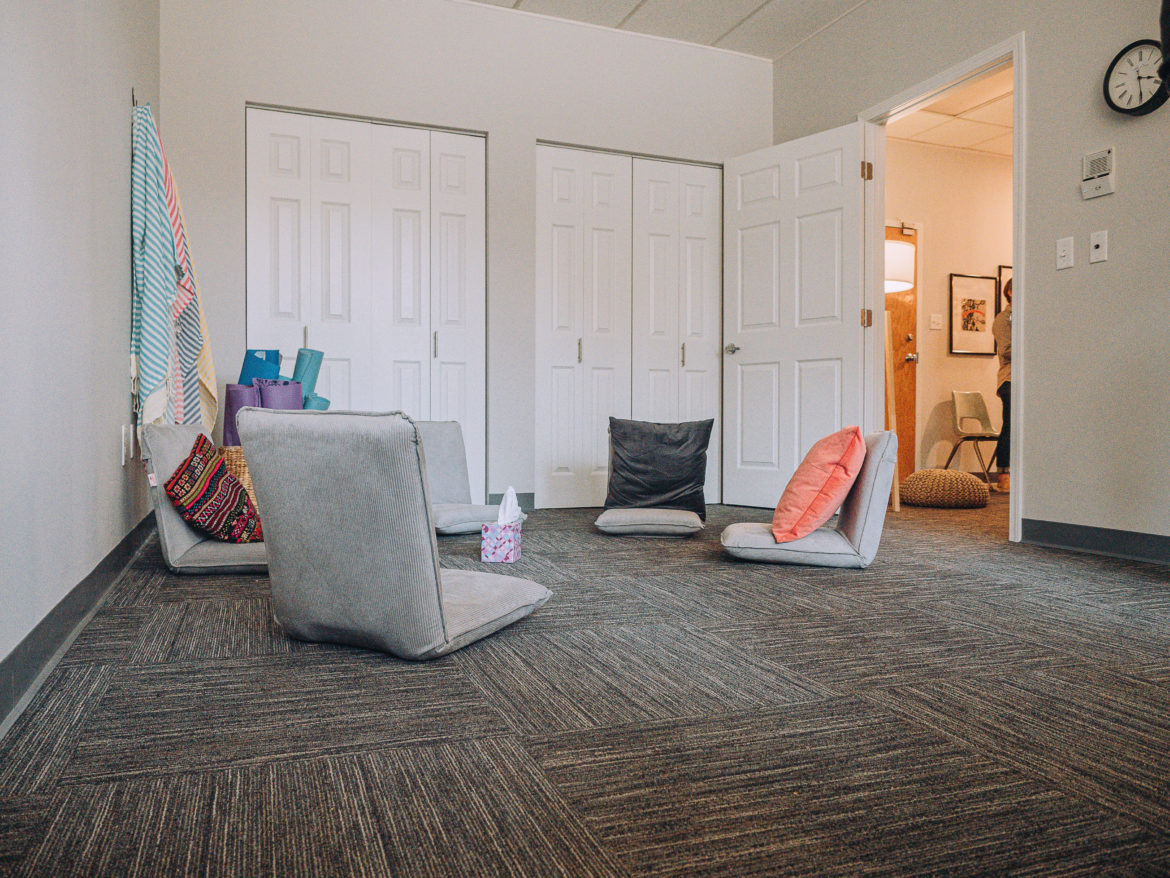 Hnatkovich hopes the organization can help remove preventable loss and trauma within the reproductive years. “Helping pregnant people feel…like they’re allowed to speak up and that, when they speak up, they’re heard.”’

Those are just a few of the words attendees of Visible Hands Collaborative added to a word collage describing their June 10 meeting experience. The collaborative, which meets every Thursday evening on Zoom, practices integrative community therapy [ICT], a group therapeutic method created in Brazil to increase mental health access in low-income communities.

The collaborative began when Alice Thompson, a medical student, became interested in ICT during the pandemic. After Thompson participated in a virtual ICT group based in Switzerland, she and her father, Dr. Kenneth Thompson, obtained a grant from the Staunton Farm Foundation to fund the first ICT training in the United States. Thirty-five people, about half of whom are in Pittsburgh, were trained to lead their own groups.

At the end of the meeting on June 10, attendees were invited to submit a word to describe their takeaway from the session.

Each 90-minute meeting is structured the same. The group begins by sharing “celebrations,” or good things happening in their lives. Then — after a brief musical interlude, dancing encouraged — attendees may share a problem, or “pebble,” they are facing. The group votes on one pebble to focus on during the meeting and spends time workshopping it by offering advice, related experiences, quotes and more.

“‘A lot of the power comes from just hearing other people talk about their own experiences with the same type of challenges. Because often when we’re feeling down or lonely or isolated, we can get stuck feeling like we’re the only ones feeling that way,” Thompson said.

The “spirit” of ICT is what sets it apart from other forms of group therapy, said Lem Huntington, a mental health case manager and participant in the collaborative. “ICT invokes sort of a celebratory and fun mood, rather than a grim, you know, here’s another day of bemoaning our woes,” he said. “It contextualizes peoples’ problems within a search for solutions.”

Unlike traditional mental health care, ICT is based in the community and doesn’t require health insurance or the ability to pay. “This is a middle ground where [meetings] are free to access and open to anybody who wants to join,” Thompson said. “So there really are no limitations.”