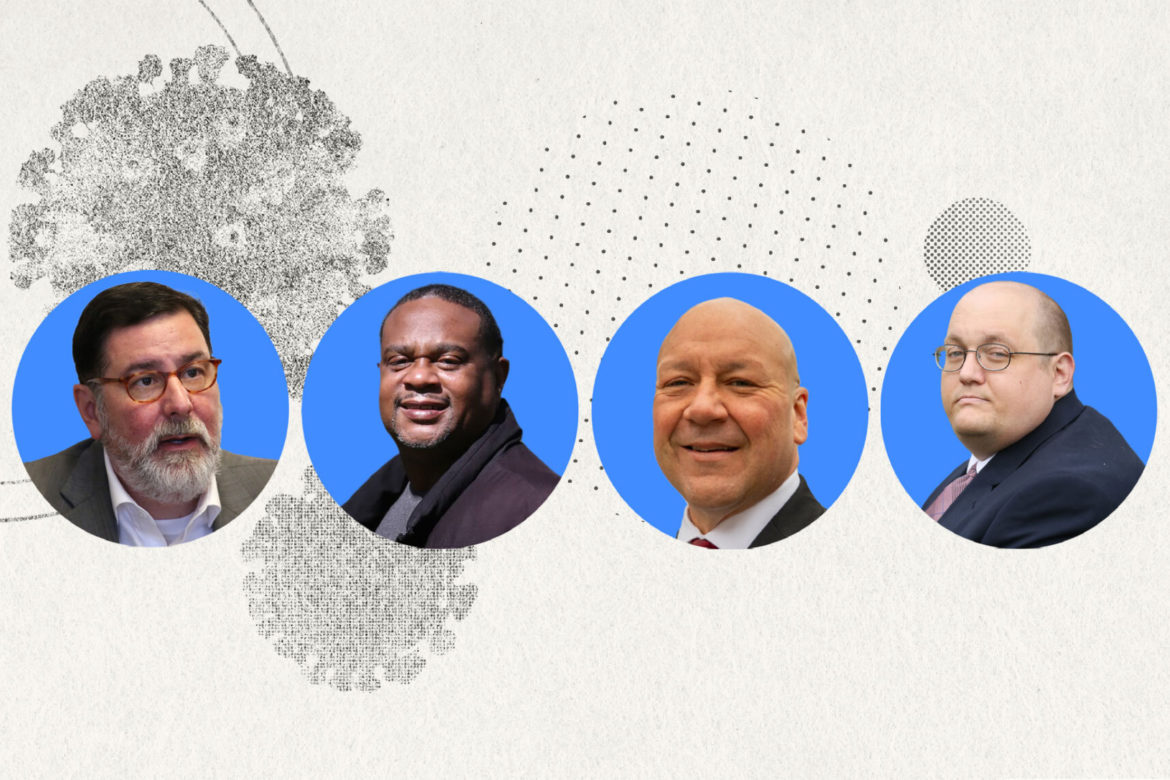 PublicSource asked several questions about how Pittsburgh should move forward from the COVID-19 pandemic in wide-ranging interviews between April 6-12 with the city’s four Democratic mayoral candidates. They each had a different take on when to get vaccinated, how to bring back the city’s workforce and whether to close streets to provide more outdoor seating. To listen to the full interviews, click here.

Q: Have you received your vaccine shot yet?

Mike Thompson: I'm one of the few that wants to thank everyone in Pittsburgh for doing such a good job. You're wondering why were you wearing a mask, why did we lock down? You were wearing a mask and you were locked down for me. I'm a “Make a Wish” kid with a brand new liver in 2018. A nice local woman I had never met gave me half her liver. And I wanted to honor her legacy by living. So I stayed home for a full year, and then I got vaccinated because I am a very high at-risk population. I'm on immunosuppressants to keep my new liver alive and so I am fully vaccinated. Every time I see someone in a mask, I think they were just looking out for me personally. That's how it feels to me.

Mayor Bill Peduto: Generals eat last. So I'll do it when it's available to my employees. I'll be real honest: I saw Sen. [Marco] Rubio get it at the head of the line and jump in front of seniors and everybody else and after listening in for a year saying it was a conspiracy or it was no different than the flu. I just said I'm not going to accept it if it was offered until it's available to everyone else. So it's available to me now, I'm 56, so I'll get it soon, but I was not going to take somebody else's place.

[On April 27, PublicSource sought an update from the mayor and received a text message response from Matt Harrison, his campaign communications director: "The Mayor received his first shot already, and hasn’t experienced any side effects. He didn’t want to cut in line, and waited to get it until everyone on his staff was eligible to get it." The mayor was interviewed on April 6 and all adult Pennsylvanians became eligible for the vaccine on April 13.]

Tony Moreno: I was COVID-positive over the election cycle. I hit a lot of poll areas. And I mean, despite all the protections, I still got it. And I'm waiting to see what the numbers look like for people that have already received it. If we're going to really need that vaccine, if it shows that, I will sign up and get it. If the people that are most needed are covered, then I'll put myself in line with it. But I feel I have a greater protection than most.

One of my campaign volunteers did become very sick, and she was hospitalized. Now she falls into the category where she's a little bit older and has some underlying medical conditions. And I was very worried about it. And that's what led me to get tested because I was feeling under the weather, and it proved out to be that. So we quarantined and had our kids quarantined with us, and we ended up coming out just fine.

[PublicSource received a text message from Moreno on April 29 that added, because he and his wife recovered from COVID-19 in November, he believes they have immunity. "We are waiting for more data to come in before we waste a shot on ourselves. We would absolutely receive a vaccination if it is found to be necessary."*]

*The Centers for Disease Control and Prevention currently recommends that people who have been infected and recovered from COVID-19 should still get the vaccine.

State Rep. Ed Gainey: I got my first one. I get my next one Saturday [April 10]. I got the Moderna. My arm was sore for like 48 hours. It was. They said the first one is not one that we have to think about, it's the second one. I'm drinking a lot of water. They said one of the things that you do before taking a second shot is you should have a lot of liquid in you, and I'm drinking water almost on the hour.

[PublicSource received an update by email on April 29 from a member of his campaign staff: “Rep. Gainey's shot on the 10th went well. His arm was slightly sore.”] 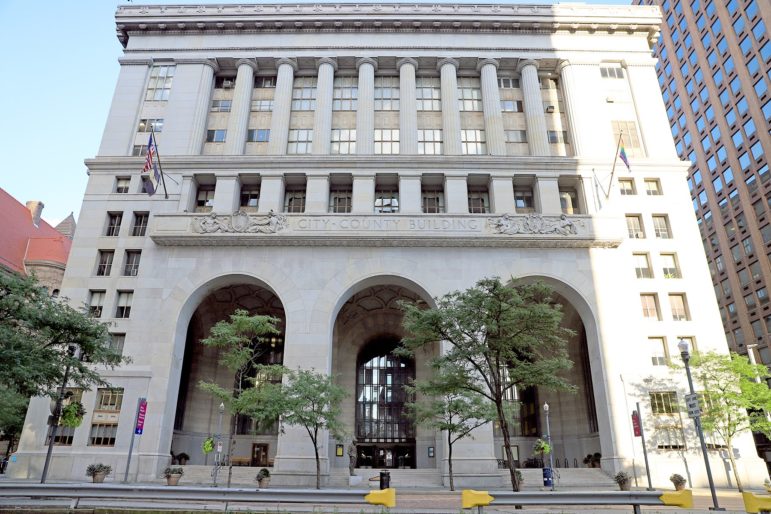 The City-County Building, on Grant Street, in Downtown Pittsburgh. (Photo by Jay Manning/PublicSource)

Peduto: Combination. And we're looking right now at where the most critical need is in order to be able to have people working, putting together schedules so that they're on a scattered shift. Some people may be in Monday, Wednesday and Friday morning, others Tuesday, Thursday, Friday afternoon. So we're never back to really crowded offices. Then also having the option for some employees to stay working at home until we get the all clear. I don't think that we'll have anything implemented as far as people starting to come back, though, until July 1.

Moreno: A hybrid model. I think that would work because it addresses a part of the childcare problem that we have, because nobody focuses on creating childcare availability for the most underserved in the city. We know that our employees suffer that. So if that can ease that problem, I would be for it. I wouldn't make it mandatory either way. I would lean more towards coming into the office and make it so the people that are in most need could do work from home.

Thompson: I'm not going to make everyone go back to the office. No way. I think some people should be in the office, but they should feel comfortable being in the office and no one should be required. For some people, it turns out they're getting more done, they're more productive, they're happier, healthier, better mental health, better physical health, and they're better off at home. And for other people, it's really much better for them to be in the office. But I still want to see my staff in person sometimes.

Q: The city experimented with closing off streets to provide outdoor seating during the pandemic and expanding bike access. Would you support making these changes permanent?

Gainey: I love outdoor seating. I love it. I think the summertime is a beautiful thing to be able to sit outside and have a meal. As far as bike lanes, there's a couple of things that have to happen. One is from an engineering standpoint to determine what is the best routes that we can do that doesn't interfere with traffic flow. Secondly is also to have some community engagements where people don’t feel like you’re just doing things and you haven’t included them. But the outdoor seating, I'm for that. I love outdoor seating. I do. I love it.

Moreno: Absolutely not. It is completely and totally detrimental to commerce. Those people did not ask for that. Those business owners didn't ask for it. And this isn't COVID-related. The mayor's been pushing this agenda far before COVID; I believe it goes out to 2016. He's had operational plans for outdoor dining in the closing of streets.

Thompson: Oh my God, it's wonderful. Yes. I live in Oakland. This little street no one ever used is now closed off. You can come to Oakland, and there's a little mini putting course you can do. It's very cute. And then around it is a restaurant. And I will be very, very, very sad if they took that away. It's a great thing to see people out in the streets. One small side street in Oakland is gone and no one cares. I'm an Uber driver, and I don't miss it at all.

Peduto: We'll support community-based initiatives. So if a neighborhood or a business district approaches us in order to be able to keep the street closed or to continue to have different types of open and open use of public space, we will work with them in order to be able to do it. We'll do it by case-by-case basis, and we'll try to find ways to provide more of an opportunity to utilize public space for public good. A parking space is used by a car for several hours; that same space could be used by dozens of individuals for an entire day.