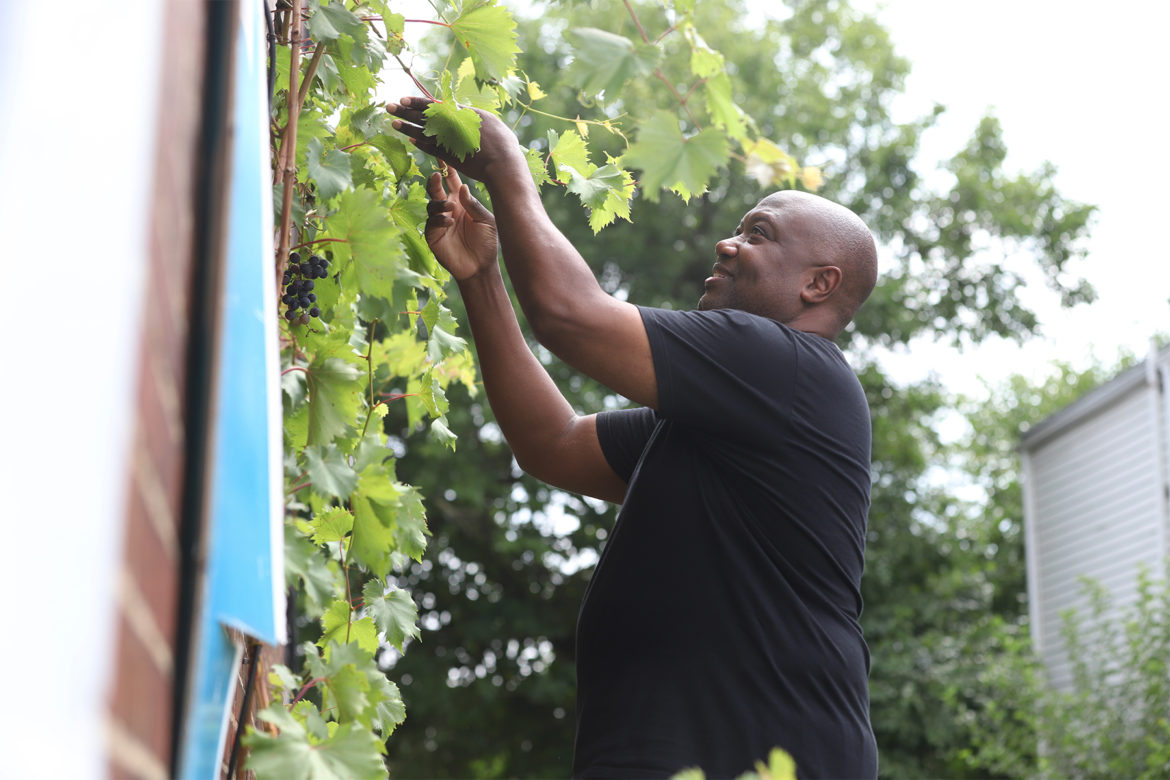 Carl Lewis, owner of Carl’s Cafe in Rankin, inspects "Grapina," a grape plant growing on the side of his store. (Photo by Ryan Loew/PublicSource)

Four individuals living in food-insecure communities in the Pittsburgh region explained how the pandemic impacted food security and how they've been working to provide their communities with fresh, healthy food.

‘The tale of two COVIDs’

Carl Lewis owns Carl’s Cafe, a corner store in the middle of a residential neighborhood in Rankin. Most of his customers live behind the store and many like to walk around the corner to buy pantry staples and produce.

Lewis prides himself in serving the community by stocking fresh produce along with typical fare like chips, candy and sodas. He’s growing some of his own food, like potatoes, radishes and greens at the store, and he’s also begun to offer classes on gardening in small spaces. 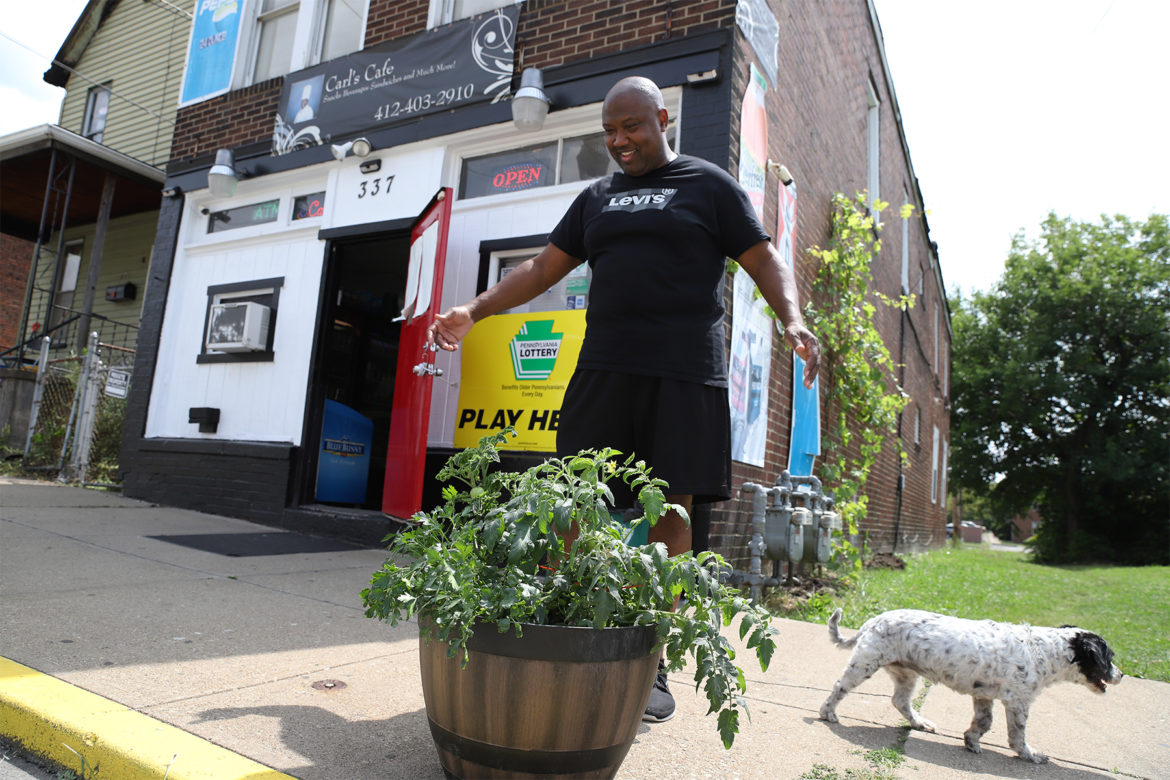 With his dog Paris tagging along, Carl Lewis, owner of Carl’s Cafe in Rankin, shows a planter of Early Girl tomatoes outside his store. (Photo by Ryan Loew/PublicSource)

“I try to be the solutions guy because not only is my business here, but I live here.”

At the onset of the pandemic, many people depended on food pantries, and Lewis had trouble stocking his store due to supply shortages.

Lewis started working with The Food Trust to sell fresh produce in 2018 and remembers when kids would come in wanting apples and oranges. During the lockdown, he saw more customers purchasing comfort food and stopped stocking some healthy options because no one was buying them.

“It’s almost like ‘The tale of two COVIDs,’” Lewis said, referencing the increase in benefits.

Many of his customers are SNAP recipients and use an EBT card to purchase items. In the last couple of months, he noticed customers were able to spend more than usual. Lewis said the commission he gets from customers using the ATM machine in his store has tripled since the early days of the pandemic.

“The ability to obtain food is not an issue right now, I don’t think in my community,” he said. “Temporarily, this is the best time that I've seen in Rankin in the 10 years that I’ve been here.”

Lewis fears that people are not prepared for the aid to come to an end. He witnessed people going from struggling to buy a bus pass to owning vehicles, and now they can drive to chain supermarkets. He speculates that may be a reason customers have nearly stopped buying fresh produce from his corner store.

“People literally had a life-changing amount of money, if they had the skill set to utilize it that way, “ he said. “It’s been a strange new reality, and it's just what has happened.”

Despite the short-term resources, Lewis believes the people of Rankin need more job opportunities. “People need to be self-sufficient,” he said. “Once this ends, things are not gonna be good because they’ve gotten a taste of this life but they have no way to maintain it.” 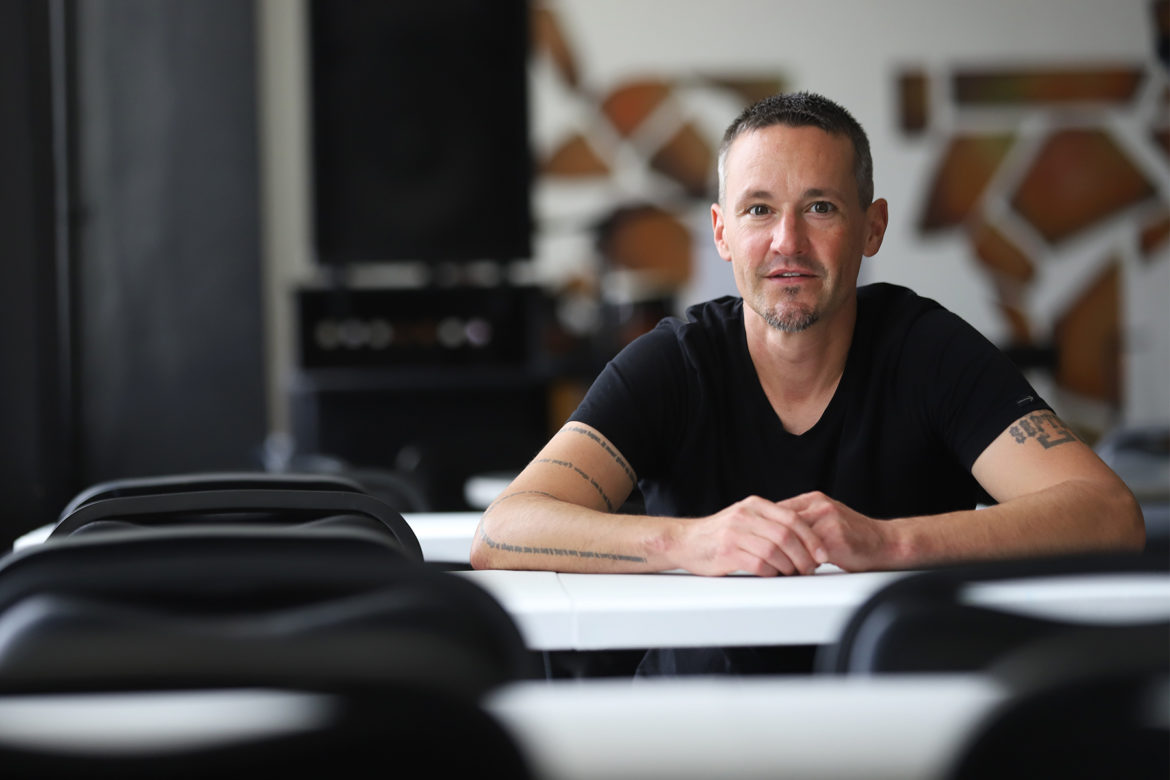 The Mosaic Community Church sits in downtown Jeannette in Westmoreland County. Having overcome addiction and homelessness, Rev. Nate Keisel speaks from personal experience about not knowing where your next meal will come from. Being reliant on the generosity of others can be humbling, he said, though “it can also create a kind of sense of inferiority and dependence.”

He and a team moved to one of the poorest neighborhoods in Jeannette 11 years ago with the goal of planting a community church. Food insecurity, as well as many other issues like poverty and lack of funding for education, disproportionally affect residents there.

Two food pantries serve Jeannette, operating on the same day, once a month. When the pandemic hit, the Mosaic Community Church, along with other local churches and organizations, collected donations and distributed food to meet the increased need.

“When you're in a community like ours and the shelves are cleared and you only have one little Dollar General that only had one shelf for toilet paper anyway, now you’ve got a whole community that’s got no access to it.”

Keisel said one of the church’s goals is to “move people from need to development.” The bus system, which Keisel describes as "archaic," overlooks the areas that need transportation the most. Reaching the grocery store can be a challenge, along with being able to commute to the nearby cities of Greensburg and Erwin for job opportunities.

Earlier in the pandemic, the church collected donations then sanitized and boxed them for church members to deliver. They also distributed “corona-kits,” supply kits of homemade masks and thermometers. “When we couldn’t find the disinfectant solution and hand sanitizers, we were making our own,” Keisel said.

When toilet paper became scarce, members were buying rolls for the kits and dropping them off to families in need. “When you're in a community like ours and the shelves are cleared and you only have one little Dollar General that only had one shelf for toilet paper anyway, now you’ve got a whole community that’s got no access to it.”

Before the pandemic, around 35 kids in the community participated in the Sunday evening Kids and Youth Club. Since transportation was often an issue, members would pick the kids up and bring them to the building. “We would eat dinner together like a family around a table” then have some games and learning activities. 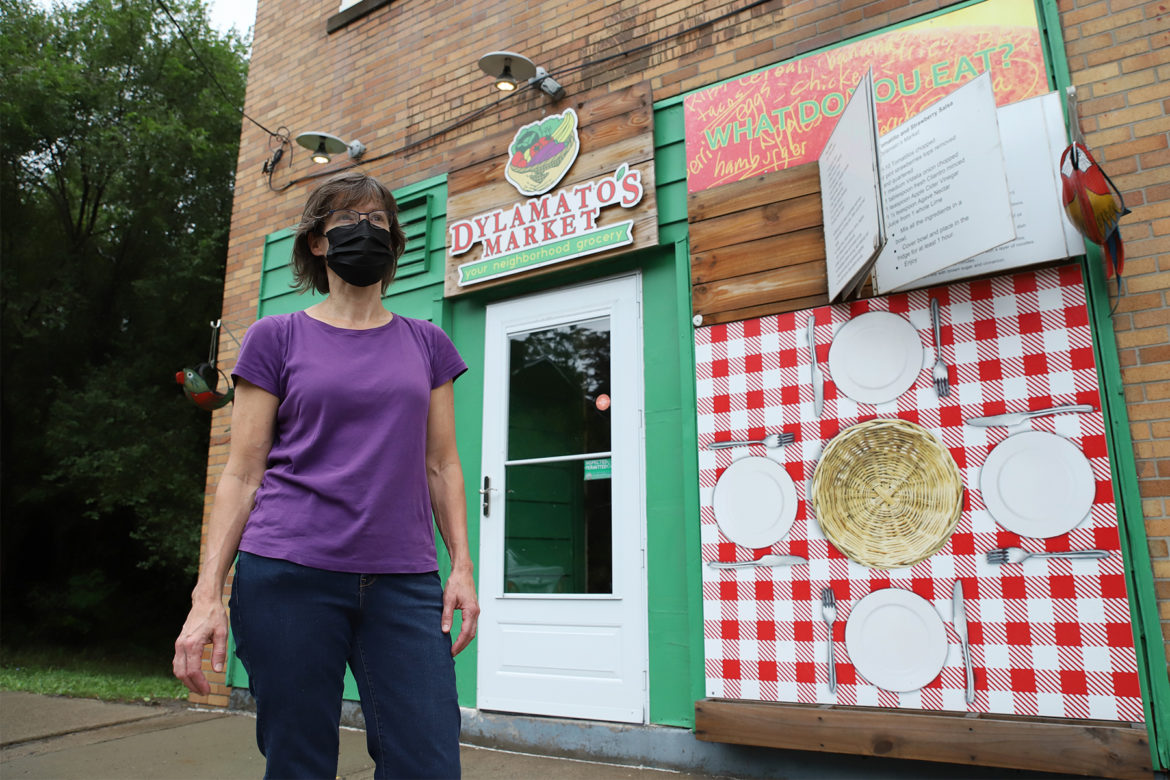 Dianne Shenk was driving through Hazelwood when she noticed a grocery store closing down. When Shenk became a food studies master’s student at Chatham University, she decided to investigate the situation there for an assignment on food availability in food deserts.

In 2011, the community development corporation was trying to create a food-buying club. “So I started sitting in those meetings and talking to people. I just became a volunteer,” she said.

While a food-buying club brought fresh produce to the community, Shenk believed it to be an inconvenient model. “People want to walk up to produce and look at it. That’s part of buying the produce.”

Shenk’s mission is to provide access to fresh, healthy food, create a positive social space and provide income for herself and local producers. More than half of what she buys is created, grown or processed in the region, she said. “We think about a grocery store like is it gonna hire people? Well, more than that, is it gonna buy local and keep local producers in business?”

All the foods are eligible for food stamps, and sales increased during the pandemic. “Suddenly we were just extremely busy,” she said. People didn’t necessarily want to go into the crowds at big grocery stores so they were seeking out Dylamato’s Market. Their deli sandwich station saw a surge in demand when many restaurants closed.

However, the pandemic brought an unexpected change to the food system and it is one of the reasons Shenk has decided to close Dylamato’s Market for at least two months starting July 31. Sourcing is a huge challenge for small grocery stores. Some of the store’s highest profit margins are shelf-stable items which she purchases from other vendors using coupons and sells at a markup. Since the pandemic accelerated the shift to digital coupons, Shenk said the ways she collected coupons to source those items before are "just not possible anymore."

In five years, Shenk has seen an increase in the number of people who come and buy fresh foods. “We provide that opportunity to say, well here's reasonably priced healthy food in your neighborhood,” she said. “People really appreciate that and they really take advantage of it, and they’re really gonna miss us” during the temporary closure.

Working towards a food secure city 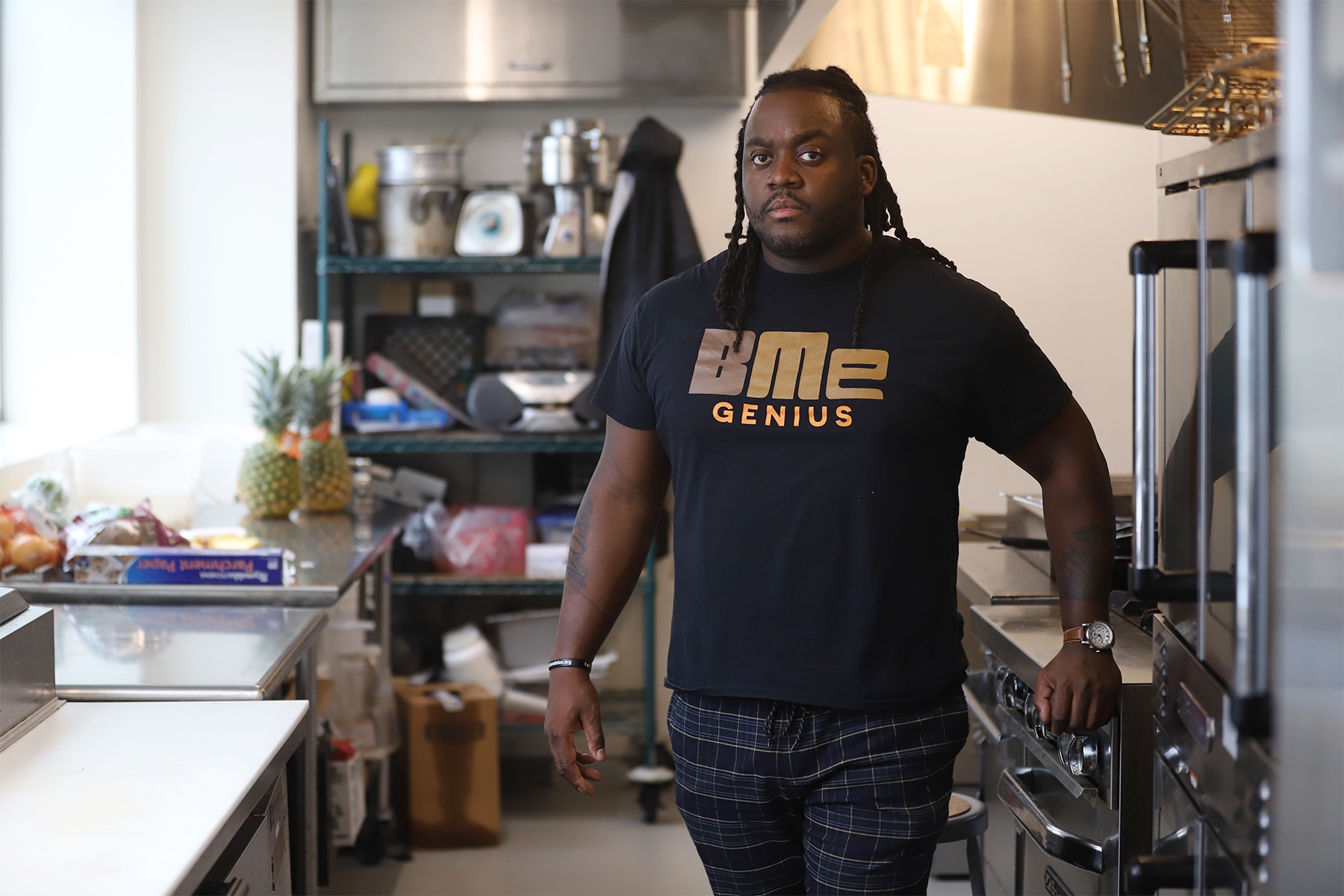 Brooklyn native chef Claudy Pierre found passion in cooking and quality food through helping his grandmother cook large meals for their Haitian-American family. After high school, Pierre came to Pittsburgh to pursue culinary arts, with a mission to provide quality food and food education to all.

The Empowerment, Awareness, and Training [EAT] Initiative, founded by Pierre in 2015, aims to provide fresh produce and healthy foods to food-insecure areas of Pittsburgh and educate the community on sustainable food practices.

“We believe Pittsburgh has everything” from all the philanthropy to education and tech “to really become a food-secure city,” said Pierre, who lives in the Hill District.

The pandemic has impacted that effort.

A study by the RAND Corporation on COVID-19’s effect on food insecurity in a low-income, predominantly Black cohort from the Hill District and Homewood found a significant increase in insecurity due to the pandemic, even though SNAP and food bank participation had not significantly changed since 2018. The study, published in the American Journal of Public Health in March, said the difference suggests that “existing safety nets may be failing to reach those with emerging needs.”

Pierre said he believes the pandemic showed how there was no “contingency plan” for an existing problem in an emergency situation.

“People have barriers like transportation, internet, phones,” he said. People who don’t own vehicles “couldn't even make it to the food distribution that was right there in their own backyards.”

Pierre and his team working in collaboration with different organizations created the Food Access Network to overcome that barrier.

In March 2020, the EAT Initiative created the Third Meal Project to make sure students had access to fresh food even when schools ran virtually. Since then, the project has expanded to serve meals to unemployed residents and at-risk senior citizens in Pittsburgh neighborhoods. Hot meals were cooked at the Hill District’s Energy Innovation Center and delivered, along with any available non-perishable items and fresh produce.

“It just jumped off.” Over 50,000 meals were delivered to underserved communities between March and November 2020.

He hopes to make a positive change by helping to bring a grocery store concept to the Hill District and to Homewood. Pierre said the goal is to build something that will last, “not just asking for donations but asking for investments,” and making sure people have constant access to fresh foods.

Xiaohan Liu is a PublicSource data and reporting intern. She can be reached at xiaohan@publicsource.org.