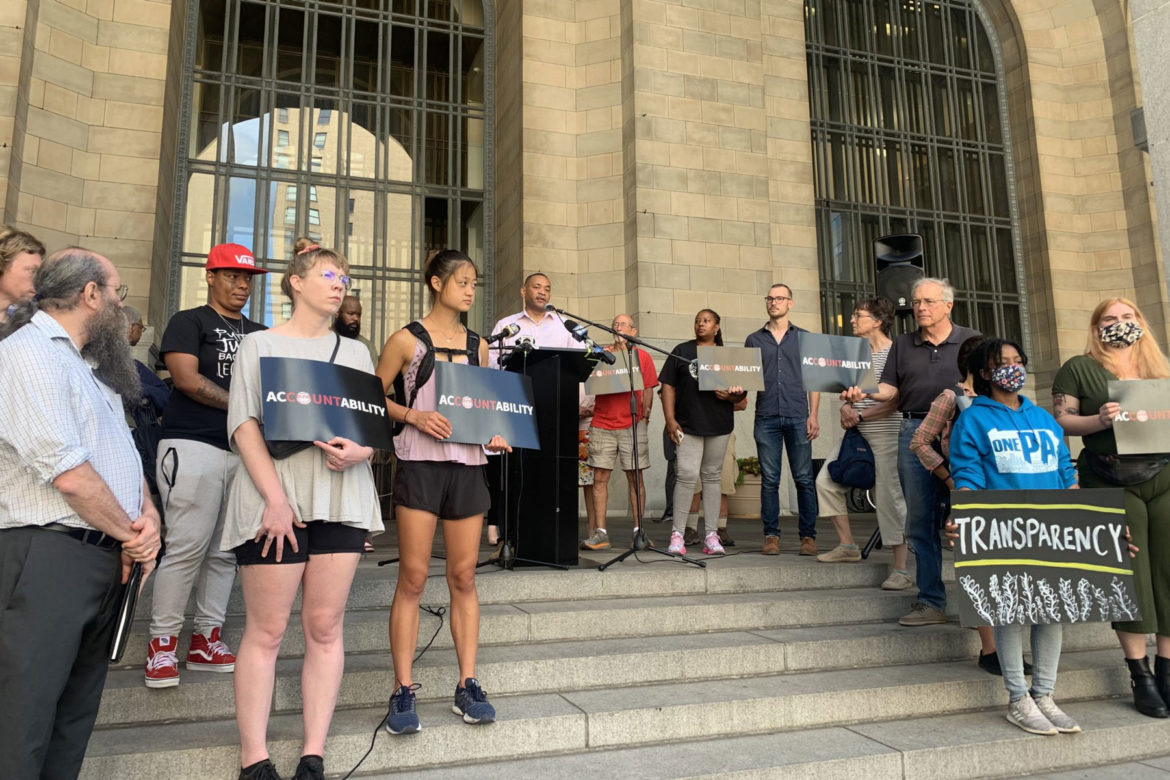 Housing activist Randall Taylor speaks at a press conference in front of the City-County building Tuesday. (Photo by Charlie Wolfson/PublicSource)

Update (7/20/2021): City Council gave final approval to the mayor's spending plan at its July 20 meeting, voting 8-1 in favor. Councilwoman Deb Gross was the only 'no' vote; she said council's public input process was "the minimum" and criticized the city's move to allocate 100% of the funds, which she said comparable cities declined to do. Councilwoman Erika Strassburger previously joined Gross in calling for a delay but voted 'yes' on final approval.

Update (7/14/2021): Pittsburgh City Council voted on Wednesday to grant preliminary approval to a plan backed by the mayor to spend $335 million in federal COVID-19 relief funds. The vote was held amid calls from activists and community organizers to delay until council heard more public input. Council debated a possible delay for over an hour, and two councilors, Deb Gross and Erika Strassburger, voted against the preliminary approval.

When Mayor Bill Peduto delivered a proposal to City Council for the use of Pittsburgh’s $335 million in federal relief funds, it was the first time some council members learned any details of the plan.

The proposal covers the next four years and includes more than $100 million to avert layoffs in the city workforce. What to do with the rest of the money is the subject of debate in city hall and among community organizers.

During two public hearings July 10 and 12, dozens of community organizers and residents called on City Council to alter the proposal to give more money for low-income renters, establish a food justice fund and prioritize clean water. A chorus of more than 70 asked council to put the proposal on hold and open the plan up for a longer public process. But Council President Theresa Kail-Smith said after Monday’s hearing that the plan will be brought up at Wednesday’s council meeting with a preliminary vote possible.

Peduto Chief of Staff Dan Gilman presented the plan to council on July 6, and in a subsequent press conference said it will “put Pittsburgh back on track for economic recovery from COVID.”

“We believe this is a plan that can be looked at across the country as one that invests in people, place, planet and performance,” Gilman said.

Gilman addressed the substance of the plan, but the loudest criticism has been about how it was created — by a task force that worked in private.

Randall Taylor, a housing advocate and former City Council candidate, said at the press conference, “City Council needs to listen to our priorities now and address our immediate needs.”

At a council hearing in May, Taylor called on council to spend $200 million on affordable housing initiatives.

But Celeste Scott, an affordable housing organizer at Pittsburgh United, said the plan neglects some of the most vulnerable people in Pittsburgh, from a housing perspective — renters.

“Where is the money to support tenants?” Scott said in an interview with PublicSource. “Low-wage tenants were the hardest hit by the pandemic and the most likely to lose their homes. Yet, all the housing money in the proposed budget would go to homeowners.”

Scott called on council to match the plan’s $36 million in relief for homeowners with another $36 million for renters.

“Data is clear that Black, low-wage and female-headed households experienced disproportionately worse health and economic hardships throughout the pandemic and are expected to continue on that trajectory throughout the recovery,” Damewood said during the July 12 hearing. “Such households are far more likely to rent than own their homes.”

Ed Nusser is a housing organizer who focuses on helping people become homeowners. As executive director of the City of Bridges Community Land Trust, he was excited that land trusts were prioritized in the proposed budget but understood the calls for more renter assistance.

“There should be a public conversation about how we split this up to serve renters and to serve owners,” Nusser said in an interview with PublicSource. “It’s good to see some money going to the creation of affordable ownership … but there’s definitely the need for acquisition of ‘naturally-occurring’ affordable rentals.”

Public conversation, or lack thereof, is the subject of some of the most intense criticism of the proposal. Nearly all of the dozens of speakers Sunday and Monday called on council to delay their scheduled votes.

Tim Stevens, CEO of the Black Political Empowerment Project, said at the Tuesday press conference, “If council does not pause, it is not listening.”

A task force was created in April to devise the spending plan and includes three council members — Council President Kail-Smith, Daniel Lavelle and Ricky Burgess — along with representatives from Peduto’s office.

“I, for one, will not be intimidated by unelected people who unfortunately do not understand how government works."

The task force did not hold public hearings, but Gilman said the team incorporated public comment through existing channels. He referenced an annual dinner the city hosts as a forum on the city budget and said the Office of Community Affairs attends community meetings across the city.

“So we’re hearing the needs of communities, whether it’s housing, affordability with utility, vacant lots and blight, the need for better city services,” Gilman said during a press conference last week. “That is the community voice that shapes us every day.”

City Council members, though, viewed the pair of public hearings July 10 and 12 as the extent of public input on the plan.

Few council members objected to the current level of input, but Councilwoman Deb Gross said during Monday’s hearing that, “We very clearly heard a call to slow down the vote, at least on a majority of the line items here."

In an interview Tuesday, Gross said that she’s “not sure whether we have it structured in a way that will meet people’s needs.” Gross said she wants to address calls for more money toward food and rental housing.

Councilwoman Erika Strassburger joined Gross on Monday in favoring a new approach, suggesting a delay until after council’s August recess.

Gilman justified the swift timeline by saying the relief was passed by Congress because people are in need, creating a mandate for the administration to act without delay. He also said that the new mayor (likely to be Democratic nominee Ed Gainey) “has every right” to work with council to amend the plan after taking office in January.

“I heard people calling for council to use its power to meet basic needs.”

Gainey has yet to comment on the allocation process. He said in May, “[Peduto] is still the mayor. I’m going to respect that.”

Kail-Smith said in response to the calls for a slower process that she has heard from residents outside of public hearings that “they need help today — yesterday,” and council is likely to move ahead quickly after making some amendments.

Councilman Burgess delivered a strong rebuke to the activists during Tuesday’s council meeting, accusing them of trying to strip council of its power.

“I believe that woven into the public comments are those individuals who are interested in limiting council, in trying to overthrow our right and responsibilities as the fiscal watchdogs,” Burgess said. “I, for one, will not be intimidated by unelected people who unfortunately do not understand how government works."

Gross, shortly after the meeting concluded, said Burgess’ speech was a “false argument.”

“I heard people calling for council to use its power to meet basic needs,” Gross said.