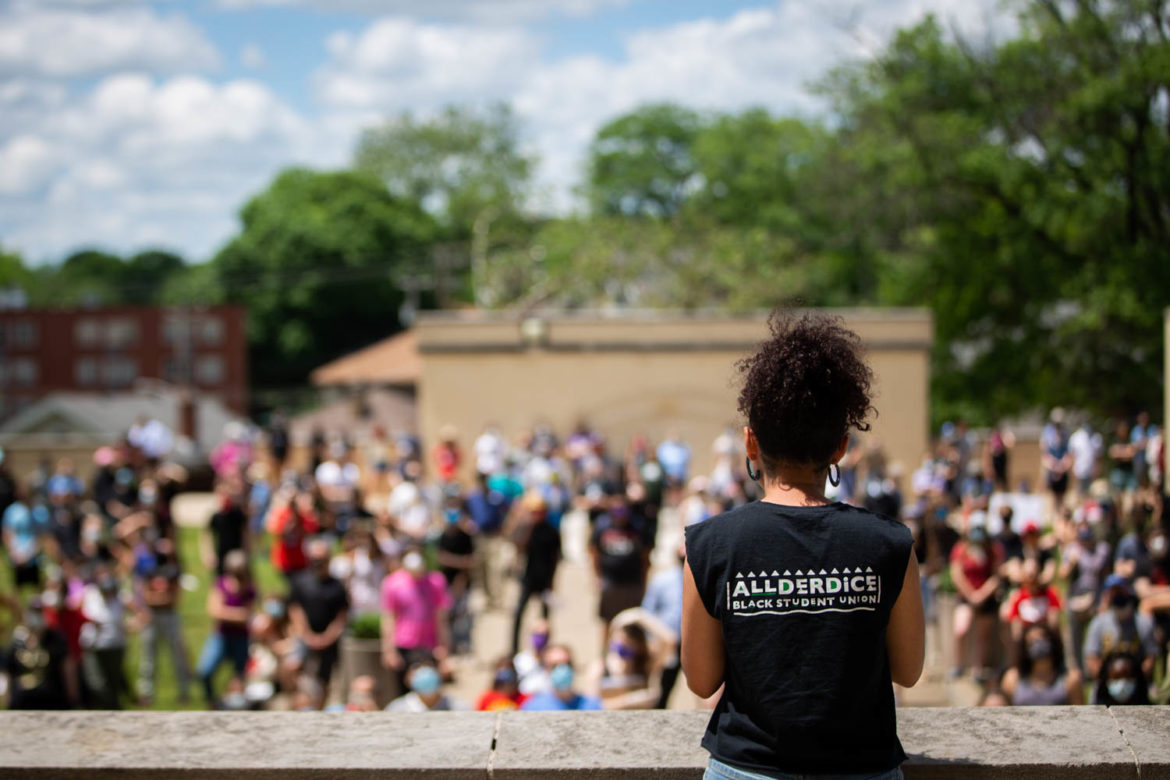 Giavanna Gibson, 19, a rising sophomore at Point Park University, read a speech she wrote about systemic racism at the June 11 demonstration at Allderdice High School. (Photo by Maranie Rae Staab/PublicSource)

Hundreds gathered at Allderdice High School and in Bloomfield and Fox Chapel borough on June 11, the 13th day of Black Lives Matter protests in Pittsburgh.

Those in attendance carried signs, participated in chants and listened to impassioned speakers who called on the crowds to show solidarity with Black students and residents in the Pittsburgh area along with those who have experienced police brutality.

"Welcome to the movement because we are going to need every single one of you ... Oppressive institutions don't get to tell the oppressed how to fight for their freedom." —State Rep. Summer Lee 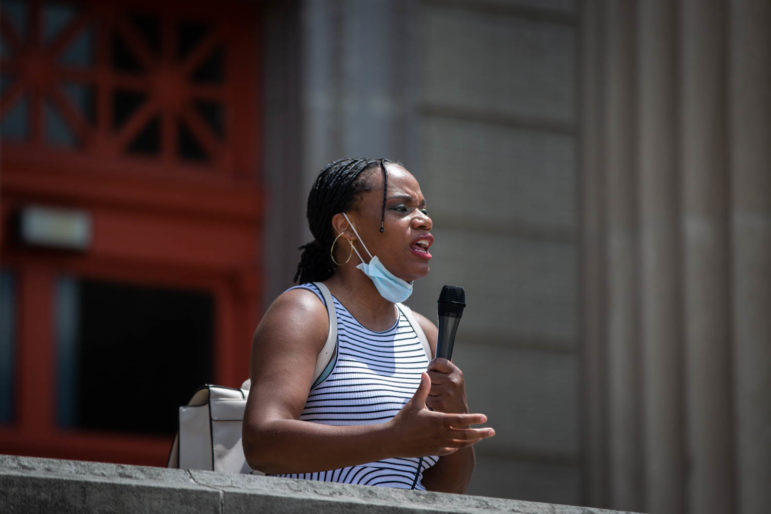 In Bloomfield, skateboarders convened to honor George Floyd and others taken by police violence.

At one point in their rolling march, they shut down traffic on Bloomfield Bridge and the Black Lives Matter demonstration ended in Friendship Park. 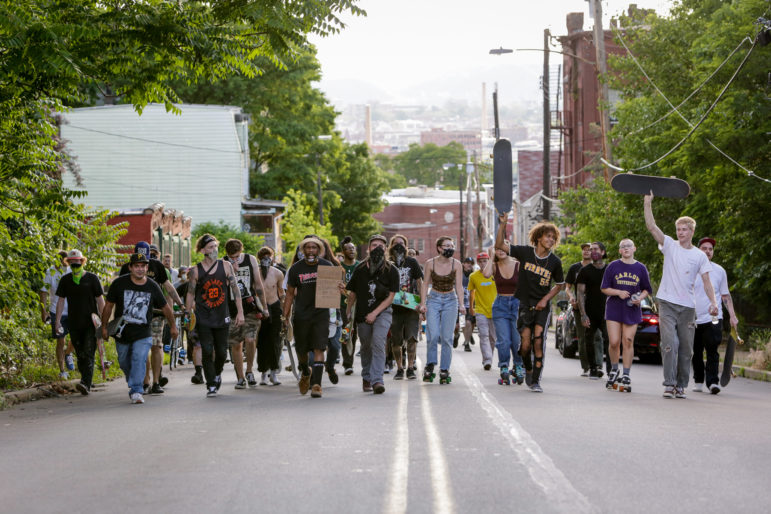 About 500 residents of Fox Chapel gathered for a “kid-friendly peaceful rally” in support of Black Lives Matter at Squaw Park in O’Hara Township on Thursday evening. A helicopter circled overhead and police in yellow vests directed traffic.

The first speaker, William Generett, the graduating president of the Black Student Union at Fox Chapel High School, said he was told by school administrators that putting up his fist was too provocative. He asked the entire crowd to put up their fists with him.

Vanessa Lynch, a member of the Fox Chapel Area School District board, vowed that her dedication would not stop after the event.

“I will not engage in platitudes or make excuses for racism,” she said. “I will listen and I will act.” 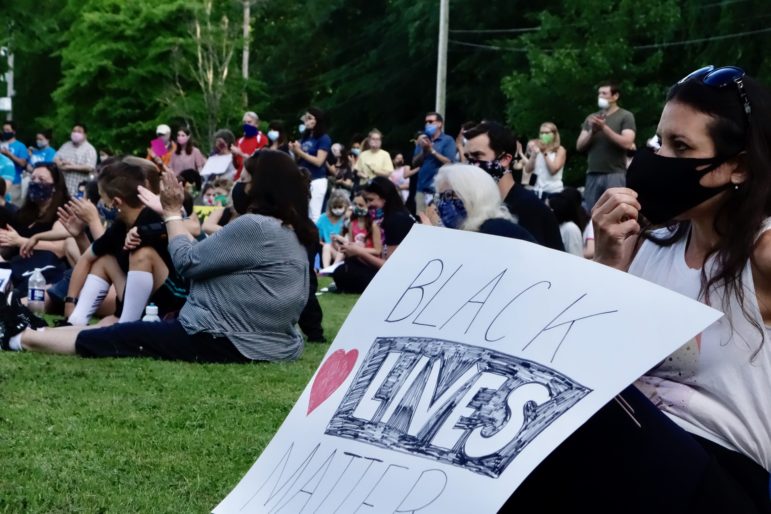 Residents were encouraged to make signs at a poster station at the front of the kid-friendly rally in Fox Chapel. (Photo by Oliver Morrison/PublicSource)

Bishop Loran Mann, a former Channel 11 anchor whose son graduated from Fox Chapel, compared the current moment to 1967, when he met Martin Luther King Jr. in Pittsburgh. He said that he and other clergy have been talking about whether “this movement could be like so many others, a few days after the protests and rallies are over, the movement will die and again nothing will happen.”

“I am of a different opinion,” he said. “I think [George Floyd’s] death has moved the world almost as much, if not more, than the death of Dr. King because everywhere you look, nations of the Earth, you see people gathering in masses saying, ’Black lives matter” and ‘Enough is enough.’”

Below are more scenes from Thursday's demonstration at Allderdice: 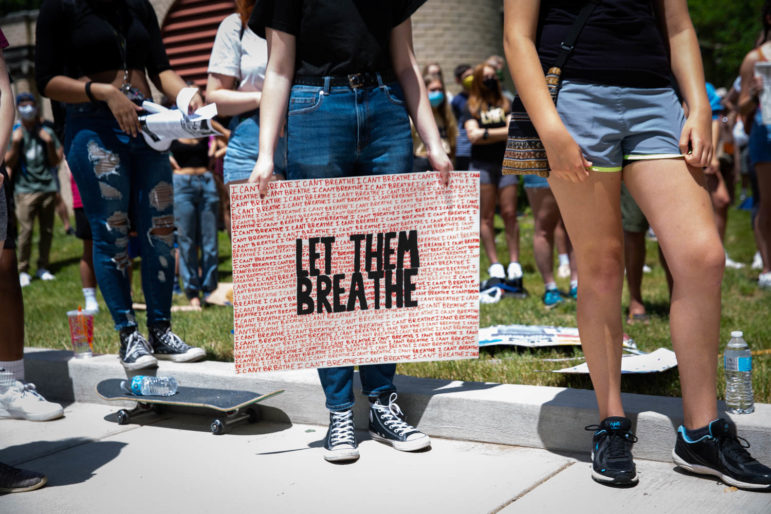 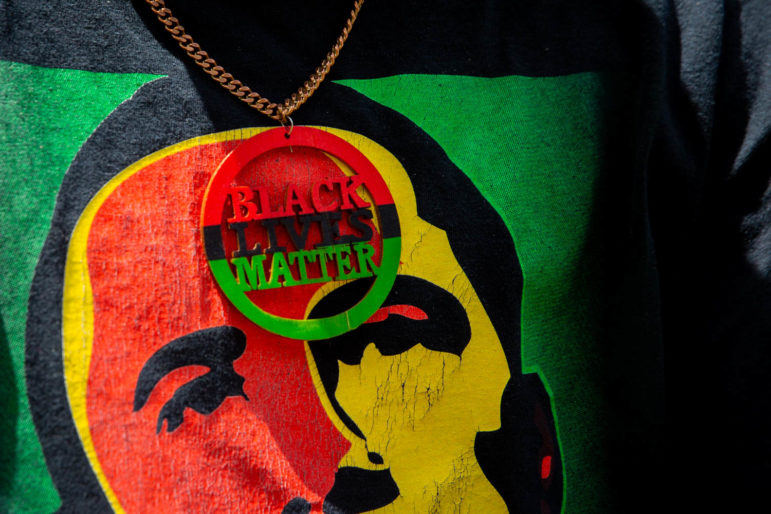 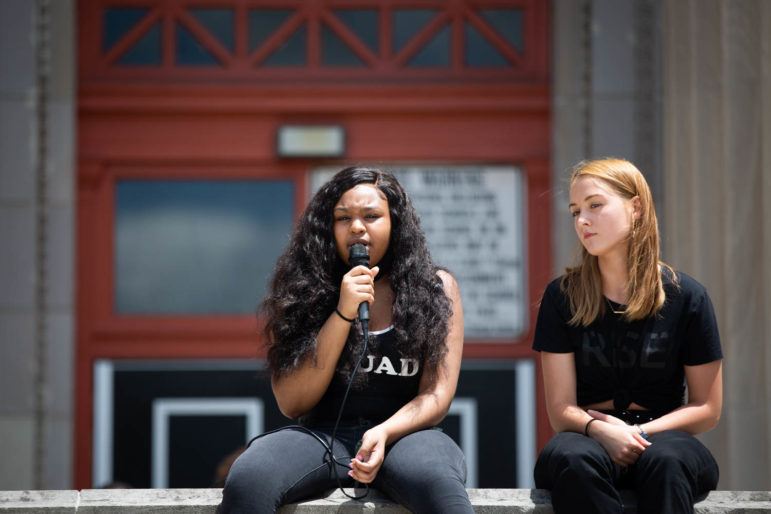 Two students, Kamaii Cobbs and Kaja Cutlip, sang "We Will Rise Up" at the Allderdice High School gathering. (Photo by Maranie Rae Staab/PublicSource) 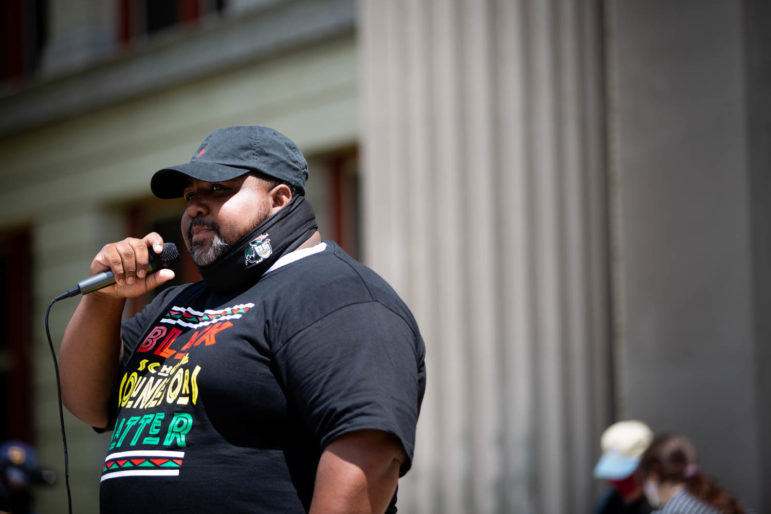 Anthony Hall, school counselor at Allderdice High School, spoke to the crowd about the importance of proactive unity and the need for empathy for what fellow students may be experiencing. He had the crowd close their eyes and talked them through a scenario of being stopped by the police as a person of color in an effort to share the fear many Black people and other people of color may feel. (Photo by Maranie Rae Staab/PublicSource) 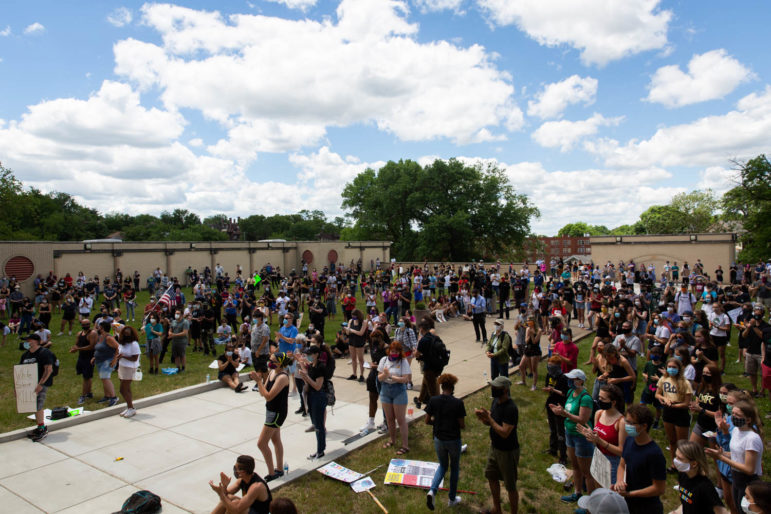 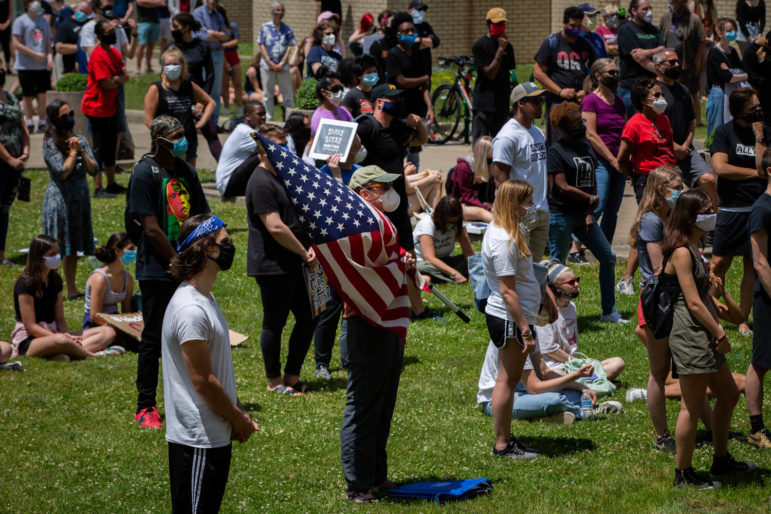 Below are more scenes from Thursday evening's demonstration through the Bloomfield area: 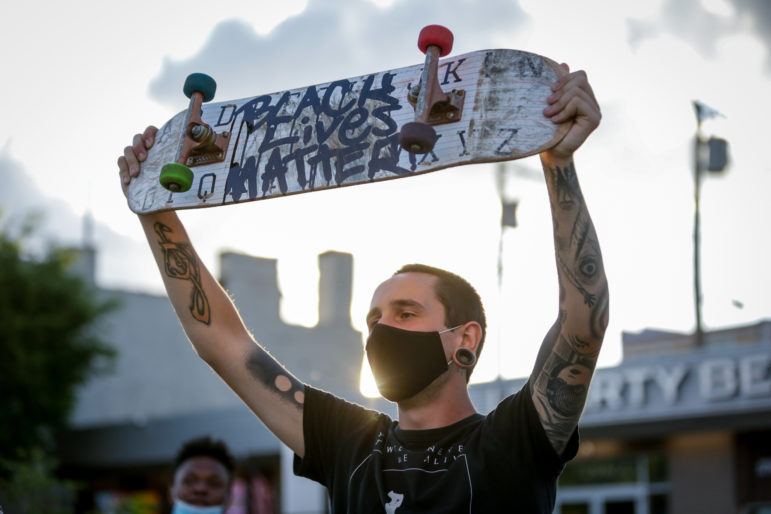 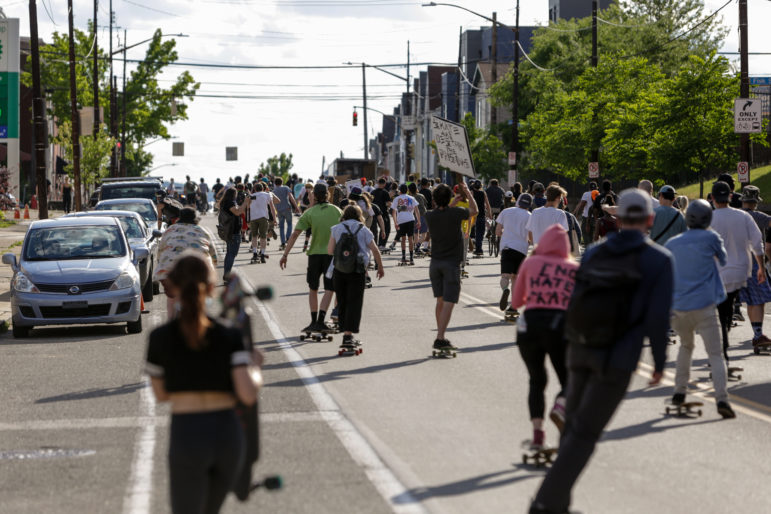 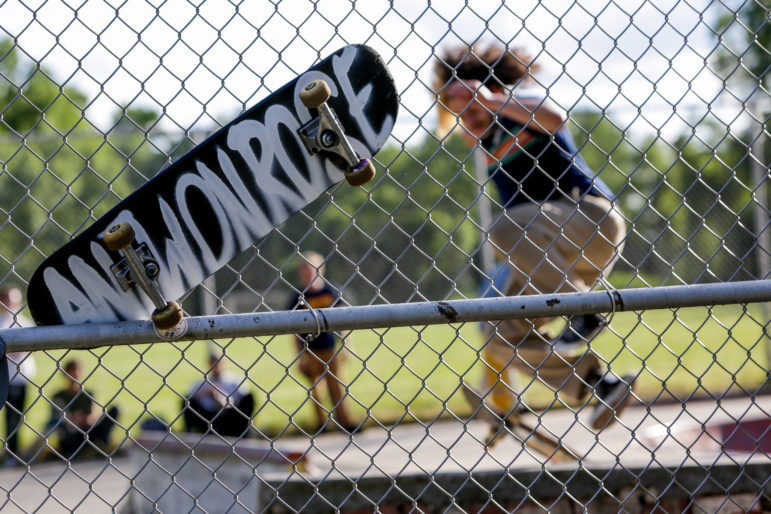 Below are more scenes from Thursday evening's demonstration in Fox Chapel: 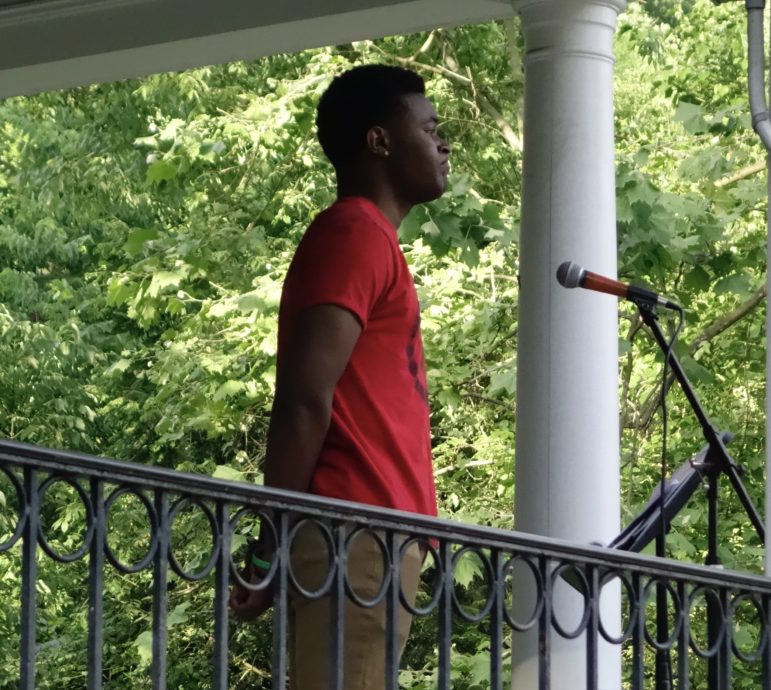 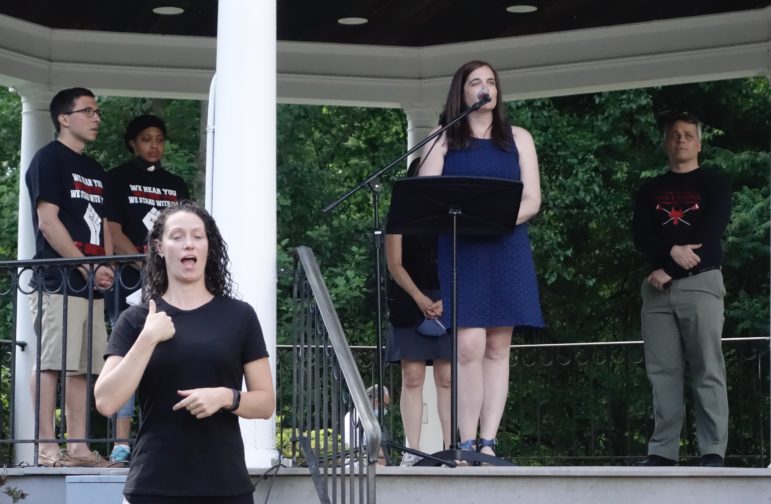 Vanessa Lynch, a member of the Fox Chapel Area School District board, vowed that her dedication would not stop after the event. (Photo by Oliver Morrison/PublicSource) 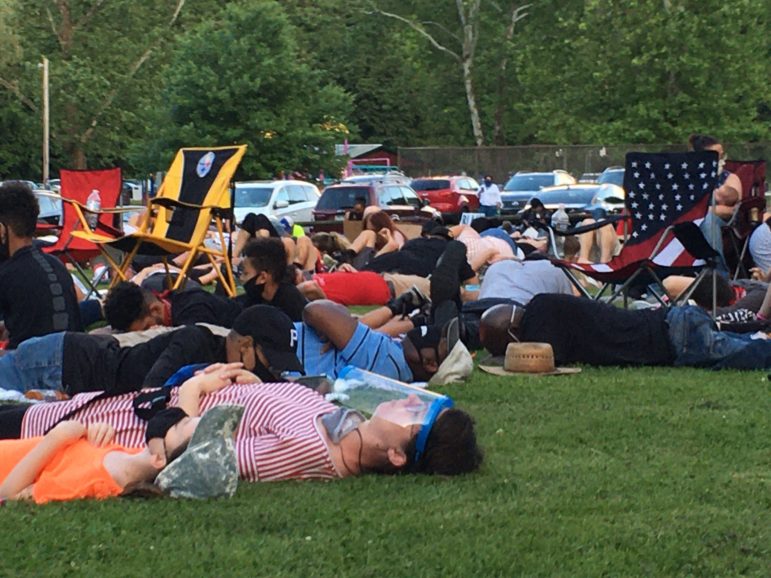 The entire crowd repeated the name of George Floyd together and then laid down for 8 minutes and 46 seconds of silence, symbolizing the time the Minneapolis police officer knelt on Floyd's neck leading to Floyd's death. (Photo by Oliver Morrison/PublicSource) 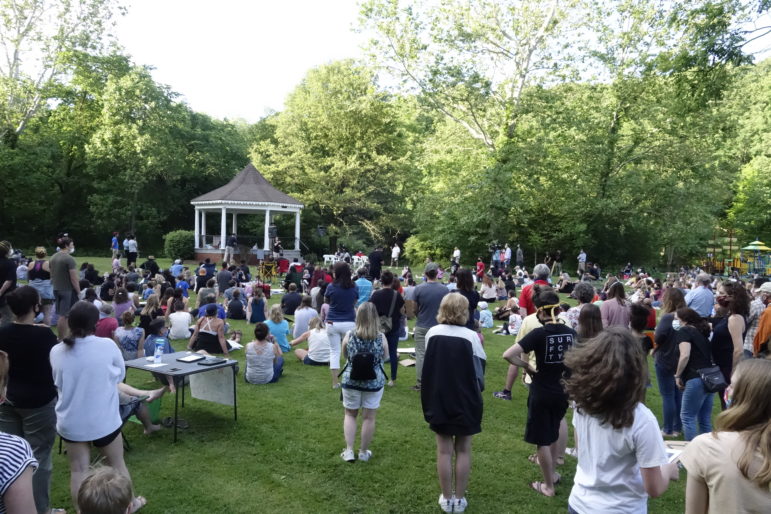 "I see a lot of white faces in the crowd, "said student William Generett. "My question for you is how are you going to go about fixing our country and community?" (Photo by Oliver Morrison/PublicSource)