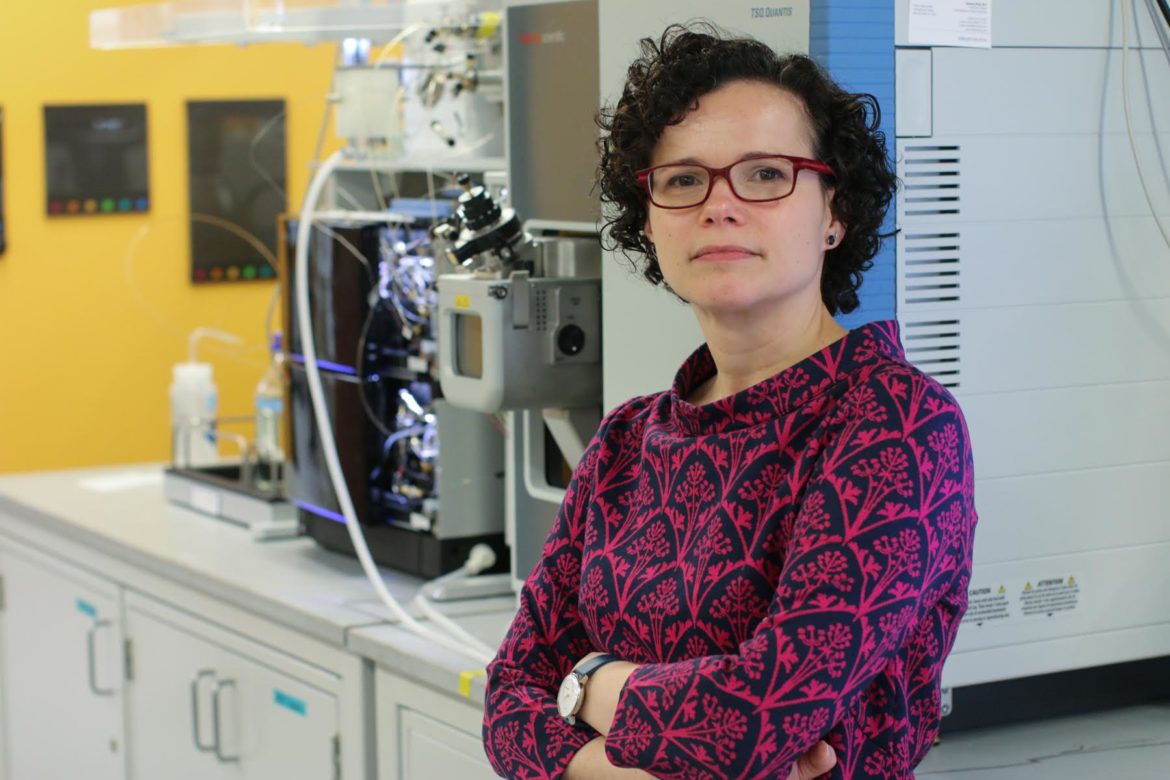 Carla Ng , pictured in her University of Pittsburgh lab in February 2020, published a paper on Tuesday that recommends new ways of addressing international PFAS contamination. (Photo by Kimberly Rowen/PublicSource)

But that chemical, PFOA, is just one of the more than 4,000 types of PFAS chemicals that scientists believe could undermine human health across the world. While most researchers study a handful of these chemicals at most, Carla Ng is one of the few scientists trying to find an approach that works for all of them.

“So without a lot of data, how are we going to tackle all these?” Ng, an assistant professor at the University of Pittsburgh, asked a group of scientists at a PFAS toxicology conference in 2019, where she was the only scientist invited to give two presentations.

To make headway, Ng is building more sophisticated animal models and studying the chemicals through computer simulations. But it is not enough to research how these chemicals might be bad for us, she said, since many chemicals are already polluting the environment. So she is helping to track where the chemicals are being used and looking for new ways to clean them up.

PFAS chemicals from firefighting foam have already contaminated the groundwater at two military bases near Pittsburgh. Pittsburgh International Airport is also likely contaminated. PFAS chemicals were detected in Coraopolis’ drinking water last year, as part of Pennsylvania’s first attempt to get a handle on how pervasive the state’s contamination is.

“The onus should not be on the consumer to be the watchdog of the products they are having...We shouldn’t have to have everybody become environmental chemists.”

Coraopolis Water and Sewer Authority approved additional filtration as a result at a relatively low cost. But PFAS cleanup can be expensive. Michigan, for example, has already identified more than $1.5 billion in cleanup sites. Meanwhile, President-elect Joe Biden has promised to set enforceable PFAS standards and designate PFA chemicals a hazardous substance, which would free up funding for cleanup.

PFAS chemicals have taken on new importance this year for another reason: They can suppress the immune response and make vaccines less effective. Although it’s not clear yet whether any PFAS would impact the effectiveness of a COVID-19 vaccine, they’ve already been found to reduce the effectiveness of other vaccines like tetanus and diphtheria.

Like many researchers, Ng had her PFAS work disrupted by the pandemic.

New COVID-19 restrictions over the summer meant Ng could only send one of her grad students at a time to train on her department’s new machine, which retails for half-a-million dollars, and can detect even very small amounts of PFAS. They had to pass on the training, like a game of telephone, from one to another. This slowed their research down.

“The good news is we had a bunch of new funding,” Ng said. She has already been awarded more than $2.5 million to fund her PFAS work through 2025, including a $500,000 award from the National Science Foundation that is given to some of the most promising young faculty across the country each year.

In February, Weixiao Cheng, a Pitt PhD student from Eastern China, was sitting in front of a laptop with a three-dimensional image of a protein found largely in the liver. He was trying to figure out how strong the bond would be between a single PFAS chemical and that protein. The computer tested how long the two molecules would hold together as they moved. “Typically, the stronger the bond, the longer it will last in the body,” he told PublicSource. 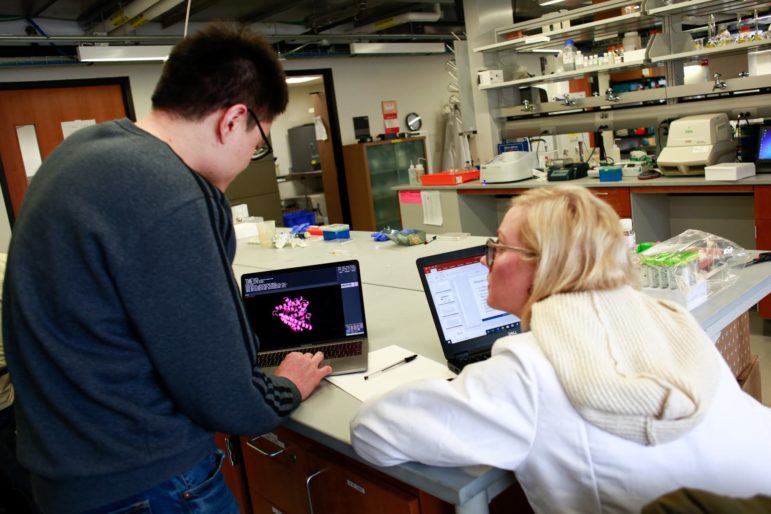 Ph.D. students Weixiao Cheng and Jenna Kuhn talk about their research on PFAS chemicals in Carla Ng's lab at the University of Pittsburgh in February 2020. (Photo by Kimberly Rowen/PublicSource)

But the protein and PFAS chemical structures are complicated, with about 100,000 atoms in different positions between the two, he said. So it takes 12 hours to run a single computer simulation for each pair. He was testing 90 pairs for this one study.

Ng’s lab is also creating models of rats and zebrafish. They’re breaking the animals down into simplified versions: just the amount of proteins found in each organ. They want to predict where the PFAS will collect and potentially disrupt their health. Manoochehr Khazaee, another graduate student, developed a model for the zebrafish, which shares about 70% of its genes with humans. Khazaee reviewed 100 papers and broke the fish down into compartments, estimating the amount of blood and protein in each part of the body.

They also do experiments to see how well their models hold up.

In one experiment, Khazaee divided up 142 zebrafish into nine different tanks and then pulled out some of the fish and extracted their hearts, intestines, livers, ovaries, brains and muscles to measure how the PFAS could be disrupting their metabolism or to look for neurotoxicity.

He found that, for example, the impacts on the liver were different for male and female zebrafish. And that the impact changed at different points in their life cycle, depending on when they pulled the fish out of their tanks.

Because of the many studies that have showed harm, manufacturers have stopped producing the two most well researched PFAS. But Ng says the PFAS used as replacements have the potential to be just as harmful. In one study, Ng identified 25 PFAS chemicals that have a large biological impact; three-quarters of them were the smaller “short chain” chemicals that industry groups have claimed are safer.

Ng is part of an international cohort trying to catalogue and track where and how all these chemicals are being used. Ng worked on a paper that was published Oct. 30 in a Royal Society of Chemistry journal, which has provided one of the most comprehensive answers yet to how widespread PFAS use is.

The team of PFAS researchers, led by a Zurich chemist, found the chemicals were used in more than 200 kinds of product categories, from dental floss to pizza boxes, from industrial solvents to MRI machines, from ski wax to ammunition, from steel coating to medical devices. 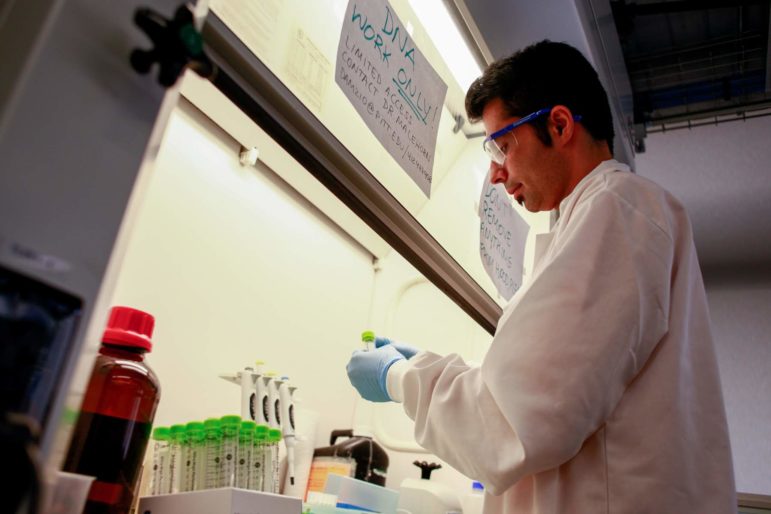 Manoochehr Khazaee, pictured in February 2020,  is one of the Ph.D. students in Carla Ng's lab who will now be able to use a $500,000 machine that measures PFAS contamination. (Photo by Kim Rowen/PublicSource)

But in the United States, they still don’t know where some of the biggest sources of PFAS pollution might be. Manufacturers reported using at least 25,000 pounds of 159 different PFAS chemicals to the EPA. A single pound has the potential to contaminate more than a billion gallons of drinking water beyond what the EPA currently recommends is safe.

“Most of that information is confidential business information [in the United States], and that’s a big problem,” Ng said.

Most scientists who study PFAS believe the EPA’s current health advisory for drinking water needs to be lowered, Ng said, “But how low, and [for] which chemicals?”

Ten states have passed more stringent limits on a handful of PFAS chemicals but no two of the regulations are exactly the same. Gov. Tom Wolf created a special task force at the Department of Environmental Protection to study whether to lower the threshold but the taskforce hasn’t released any new PFAS test results since the pandemic started.

Ng doesn’t know of any other efforts to find PFAS contamination sites in the Pittsburgh region. But she also thinks that there may be too much emphasis placed on searching for PFAS in drinking water.

“Everyone is focused on drinking water, and it’s a crisis for contaminated communities.” But she said that’s probably not the main source of contamination for many communities like Pittsburgh, which have faced other issues like lead contamination, sewage runoff and infrastructure failure. Ng is starting a study that looks at PFAS exposure from foods, for example. 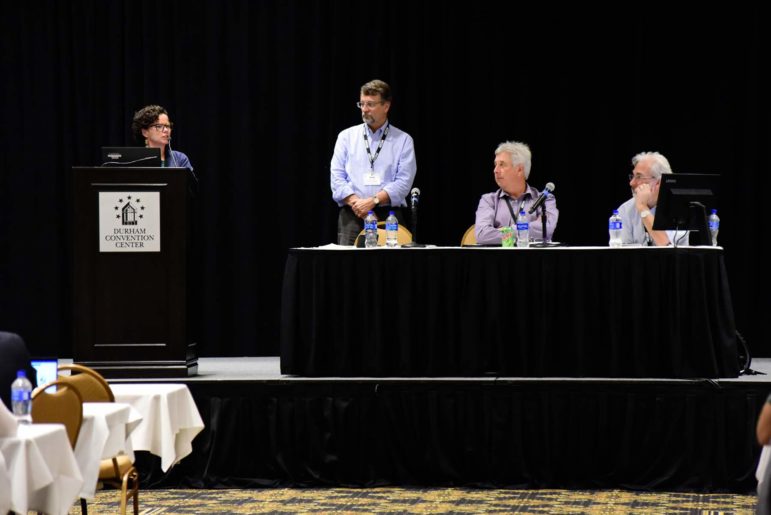 Carla Ng was the only scientist invited to give two presentations at a PFAS conference put on by the Society of Environmental Toxicology and Chemistry in Durham, N.C. in August 2019. (Courtesy photo by Steven McCaw)

It doesn’t make sense to use PFAS chemicals that don’t deteriorate, Ng said, only to later find out they cause widespread harm. The burden should be on industry to prove that their chemicals are safe first, rather than the other way around, she said.

In the meantime, Ng hopes the efforts to identify the many widespread uses of PFAS will help regulators limit them to “essential uses” only. For example, medical devices might be allowed if there is no other alternative yet but PFAS could be banned in things like dental floss, where there are already alternatives.

Ng’s family has stopped using some products, such as microwavable popcorn (many fast food wrappers use a PFAS chemical to prevent grease from seeping through). But she thinks people need more help. “The onus should not be on the consumer to be the watchdog of the products they are having,” she said. “We shouldn’t have to have everybody become environmental chemists.”

The best long-term solution for the United States would involve applying a “precautionary principle” like this, she said. Our country has made the same mistakes over and over again, with chemicals like DDT and PCBs, she said. "CFCs were seen as this magical, perfectly inert thing, a perfect refrigerant, perfectly safe -- then we created a hole in the ozone layer,” she said.

“We are really bad at guessing if something is going to be bad,” she said.

This story was fact-checked by Emily Briselli