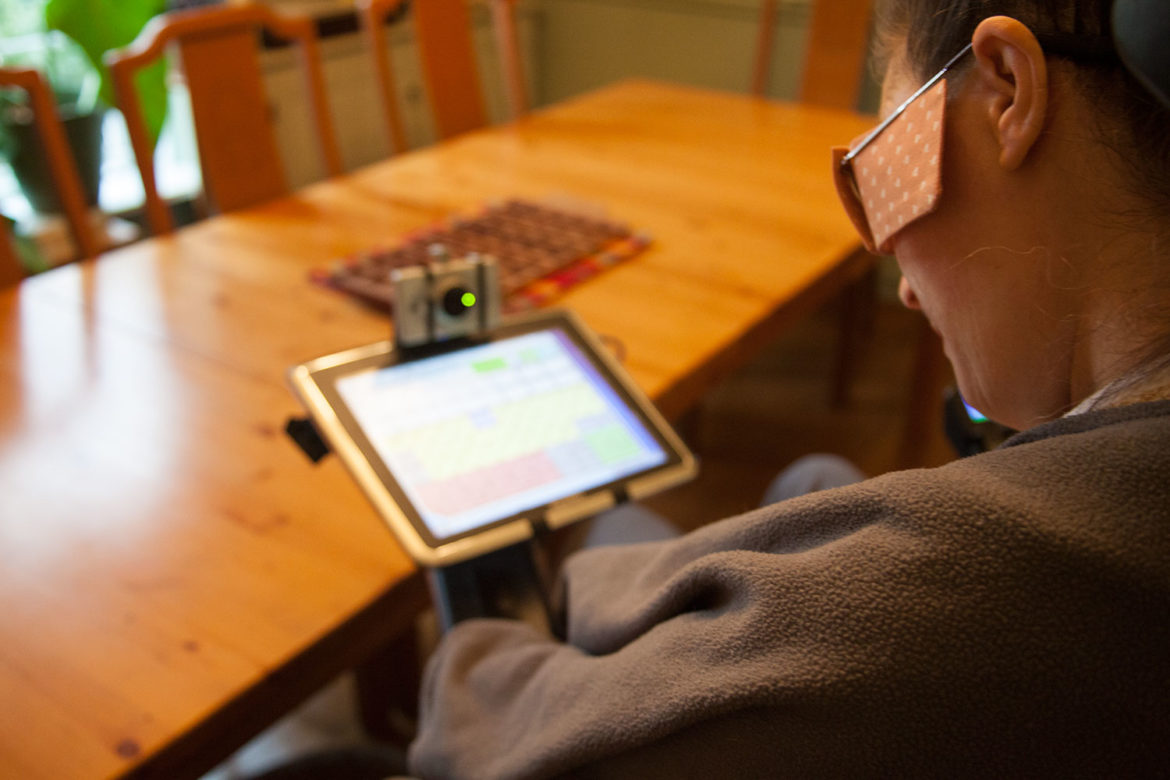 Update: The Centers for Medicare and Medicaid Services issued a final decision on the coverage of speech-generating devices on July 29. The new policy redefines “speech” to include email, text and phone communication. The federal agency threatened to take the capabilities away last year.

In another development, the Steve Gleason Act was signed by President Barack Obama on July 30. The bill removes a 13-month rental period; without ownership from the beginning, device users could not add functions and could have lost the device if they entered a hospital or nursing home. The bill also clarifies coverage for eye-tracking technology and other accessories needed for some to use the device.

Speech may soon be federally recognized as more than just what happens in a face-to-face conversation after thousands of people with disabilities and their advocates said that communications by phone, text and email are also important.

About a year ago, the Centers for Medicare and Medicaid Services [CMS] made a series of moves to narrow its coverage of speech-generating devices.

All modern forms of communication were casualties of the process.

Protests from patients, advocates, lawmakers and device manufacturers caused the agency to open up a review of the national coverage determination in November.

Nearly 2,300 people submitted comments to the agency about how the changes would affect the lives of people who rely on the devices because of ALS (or Lou Gehrig’s Disease), cerebral palsy, traumatic brain injury, Parkinson’s disease, multiple sclerosis, aphasia and various neurological conditions.

Now, CMS has proposed a new policy for speech-generating devices that expands the definition of speech to include text messaging, email and phone capabilities. The agency states that it believes a written message from a person who cannot speak serves the same purpose as audible speech.

The beneficiary would still need to pay for the Internet and phone services that support those functions.

“This is a positive development,” said Lewis Golinker, director of the Assistive Technology Law Center in Ithaca, N.Y. “It restores and respects the significant uses that people make of communication devices.”

Although patients and advocates are overwhelmingly relieved by the proposal, CMS has still set some boundaries for the technology it will allow.

Hardware or software used to create documents and spreadsheets, to play games and music or to make video calls would not be covered because CMS says those activities are not communications needs.

Andrew Jinks, a speech pathologist at the Center for Assistive Technology in Pittsburgh, calls that “irresponsible and backward thinking.” People with disabilities who work may need access to documents and spreadsheets, and many can learn through games, he said.

“As Instagram and Facebook have replaced phone calls and voice communications, to what benefit is it to restrict these communication modes from individuals with disabilities?” he said.

What you can do:

Read and comment on the proposed national coverage determination for speech-generating devices here.

Contact your congressman to share your support or opposition to the the Steve Gleason Act, which is currently being considered by the U.S. House of Representatives.

Mara Sweterlitsch, a Mount Lebanon woman with ALS, uses her speech-generating device to pay bills, to order prescriptions and supplies, and to text or email friends and caregivers.

She considers the device to be just as much an aid to daily living as a walker would be to someone with a broken hip, she said.

“When I am alone, text and email are my only means of getting non-emergency help. These functions aren't just conveniences,” Sweterlitsch wrote in an email to PublicSource. “The proposed policy finally recognizes all the interrelated needs of [speech-generating device] users and lets them leverage existing technology to cope.”

Despite CMS changing course, several hundred patients have been given locked communication devices, meaning they have been and still are being deprived of phone calls, emails and texts. They can only generate audible speech, so they can’t communicate with anybody out of earshot.

Some manufacturers began sending out devices with the add-ons already blacked out as the policy was debated.

Device manufacturer Tobii Dynavox, which has a headquarters in Pittsburgh, sent out 600 to 650 locked devices during this limbo, said Tara Rudnicki, the company’s president. The company is still awaiting clarification as to whether it can expand the functionality on those.

“Not having these abilities has been really devastating over the last 15 months,” Rudnicki said. “It’s been horrendous for us and family members to say, ‘No.’ ”

In April 2014, the agency established a 13-month rental period during which beneficiaries could not install upgrades.

Months later and without explanation, CMS announced that on Dec. 1 Medicare would stop approving devices on which these functions could be added.

Amy Goldman, co-executive director of the Institute on Disabilities at Temple University, said the changes “would have sent researchers and manufacturers [into] developing products suitable for the 1970s, devices that would have no capacity ever for telecommunications access.”

The CMS proposal did not address two key concerns, but a separate bill, called the Steve Gleason Act, could.

The bill, which passed the U.S. Senate on April 22 and is now in the House, would eliminate the 13-month rental period.

Beneficiaries would be able to upgrade the devices right away, and they could keep it should they be admitted into a hospital, nursing home or hospice. Under the rental scheme, patients would have to surrender the device because Medicare expects facilities to provide necessary equipment.

This posed a problem because the devices are built to a patient's specific needs, and many facilities don’t have the funds to pay for the costly devices.

Eye-tracking equipment allows people who have been paralyzed by a disease like ALS to choose letters and words by moving their eyes on a screen.

Medicare never said it stopped covering eye tracking, but some in the assistive technology field have noticed a pattern of denials.

If the act passes the House, it would go into effect on Oct. 1 for at least two years.