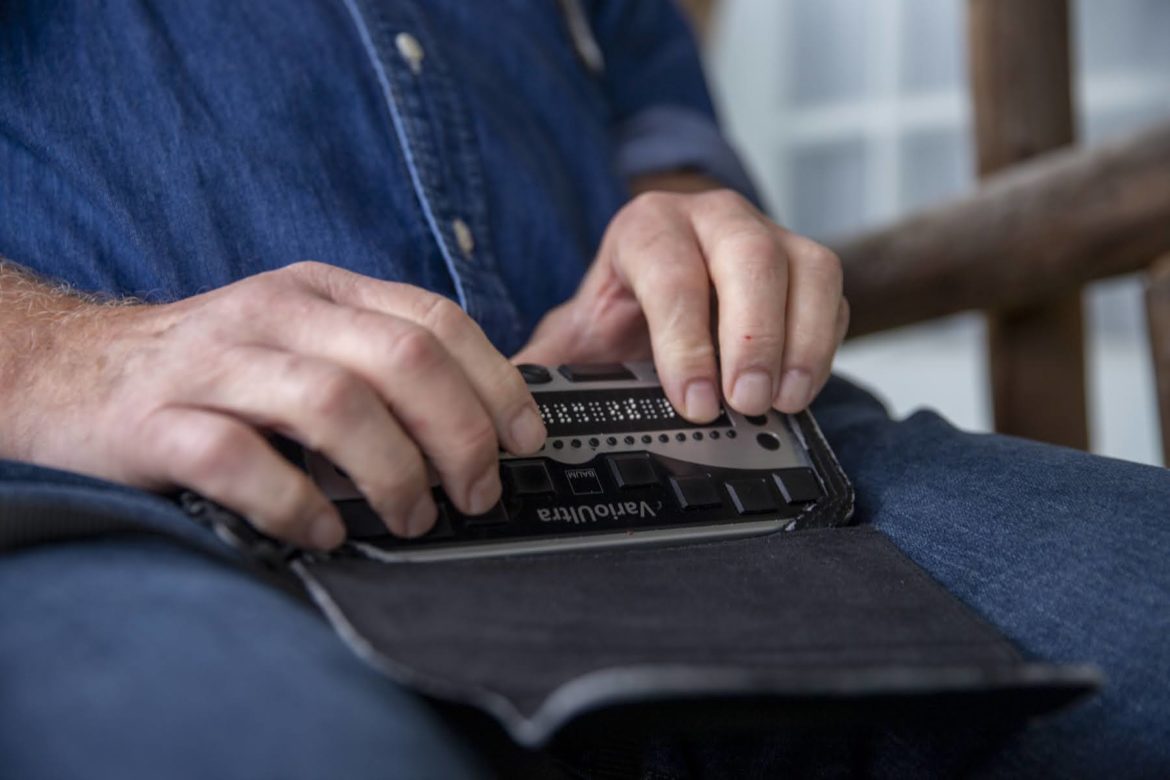 Richard McGann, a deafblind voter from Brookline, uses a braille display that connects to his phone to communicate. McGann, who needed assistance to vote with a standard mail-in ballot, said he did not know Pennsylvania's new accessible voting system was running. (Photo by Jay Manning/ PublicSource)

Pennsylvania has a new system in place to provide a more accessible vote-by-mail option for voters with visual disabilities. The technology, called OmniBallot, follows a lawsuit during the primary election and gives voters the ability to complete ballots themselves on a computer before mailing it in.

Almost 270,000 voting-age Pennsylvanians are blind or have serious difficulty seeing even while wearing glasses, according to 2019 U.S. Census data. But according to the Pennsylvania Department of State [DOS], only 50 voters with disabilities had requested the use of OmniBallot as of Oct. 27.

So why did so few Pennsylvanians use it?

Some voters and disability advocates told PublicSource the tool was a necessary starting point, but voiced concerns about confusing instructions and the requirement of printing and mailing the ballot, rather than submitting it electronically. Other voters opted to cast their vote in-person or by standard mail-in ballot because they either found the new system to be too complicated or simply didn’t know about it.

Following a May lawsuit by Chalfont resident Joseph Drenth and the National Federation of the Blind of Pennsylvania [NFB-PA], DOS implemented the OmniBallot system, created by voting technology company Democracy Live. OmniBallot allows eligible voters to request an accessible mail-in ballot and fill it out on a computer using assistive technology, such as a screen reader or braille display. Voters then print their ballot, insert it into secrecy and outer envelopes, sign the outer envelope and mail it to the county elections office.

DOS made the decision to have voters return the accessible remote ballot by mail or in-person “based on the lack of cybersecurity controls and assurances in the field of internet/online voting,” spokesperson Ellen Lyon wrote in an email to PublicSource.

While DOS would not speculate as to why so few voters have opted to vote by accessible mail-in ballot, Lyon said that “in-person voting in Pennsylvania is more accessible than ever before,” with accessibility testing that was done for the voting systems in every county. 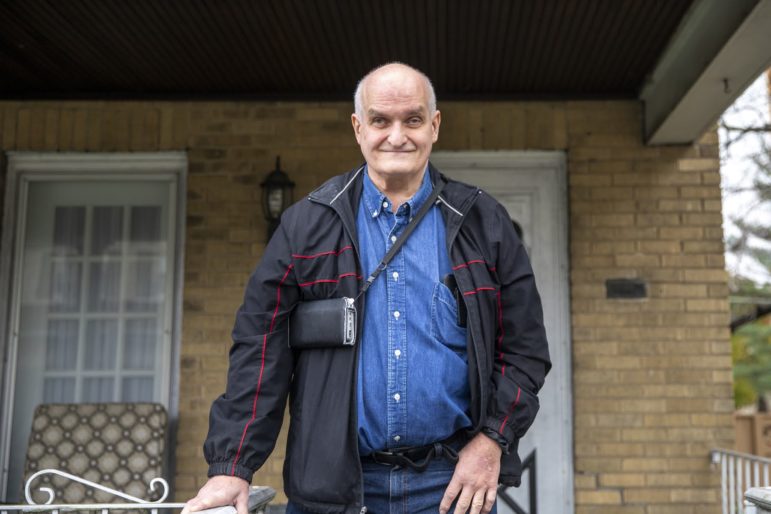 Richard McGann, a deafblind voter from Brookline, said he was aware of the lawsuit but did not know the accessible vote-by-mail option was already up and running. “I don’t know what happened with it. I was counting on that,” McGann, who is a member of the City-County Task Force on Disabilities, told PublicSource through an interpreter. Instead, he received a regular vote-by-mail ballot, which his sister helped him request and fill out.

“I want to be able to vote on my own. I want to use my own hands and place my own vote without depending on another person,” McGann, 67, said. “Maybe the other person might secretly check what I don’t want them to check.”

Individuals with a disability have long faced barriers to voting and vote at a lower rate than their peers. A national study from Rutgers University found that 49.3% of eligible voters with a disability voted during the 2018 midterm election, compared to 54% of eligible voters who did not have a disability. At least 10 other states joined Pennsylvania in adopting changes to their vote-by-mail systems this year in order to accommodate voters with disabilities, Kaiser Health News reported.

“I want to be able to vote on my own. I want to use my own hands and place my own vote without depending on another person.”

Heather Schoenwald, a 47-year-old deafblind voter from Bellevue, said she plans to vote in person at her polling place with the help of an interpreter. She tried to request a standard mail-in ballot but, because she moved to the region from Oregon in March, she didn’t have a necessary Pennsylvania ID. Still, she was surprised to learn the state offered an accessible vote-by-mail system. “That’s the first time I’ve heard of it,” she said. “How are they notifying other people about it?”

Lyon said DOS provided outreach to organizations that work with voters with disabilities and linked to information about the system on the Votes PA homepage.

Several voters and advocates PublicSource spoke to pointed out that the new system requires voters to print their ballot, yet many people — especially blind people — do not own printers.

Catherine Getchell, a 40-year-old Squirrel Hill voter who is blind, said she didn’t know the new, accessible system applied to mail-in ballots. “But it wouldn’t have changed my approach because I don’t have a printer at home, so I would have had to go into work to print out the ballot,” she wrote in an email to PublicSource. “Given all that, it would still have probably been easiest to get help with the ballot.”

Other voters did use the new system but found it to be flawed.

Drenth, who is blind and was the plaintiff in the lawsuit against the state, said he used the new system and found it “mostly” accessible. But he was concerned his ballot wouldn’t be accepted if he didn't fill out the information on the back of the outer envelope. According to Kelly Darr, the legal director of Disability Rights Pennsylvania which represented Drenth, at least one voter in the state was told their accessible ballot was invalid because they did not print their name and address on the outer envelope. “That’s not on the instructions,” Darr said.

DOS instructed counties that “as long as there is a signature anywhere on the envelope these ballots are to be accepted and counted by the counties,” Lyon wrote.

Drenth and several others said a better solution would allow voters to complete and submit their ballots electronically, without the help of a sighted person. “We’re disappointed that Pennsylvania did not provide a complete method for completing ballots and submitting privately,” Drenth said.

Charles Shipley, 67, of Bridgeville, is deafblind. He voted for the first time this election. He said he considered using the new system but found it to be too complicated. “I’m going to guess that a lot of other deafblind people don’t understand the wording on it. We’re probably all in the same boat,” he said through an interpreter. Shipley instead voted by absentee ballot with the help of his wife, Laura. “What we need is a braille form, you know? That would be much easier. But it’s not out there.”

McGann agreed. He said he attended the 2019 Disability & Mental Health Summit and told lawmakers he would prefer a braille ballot. But only a few jurisdictions in the country, such as Arizona, provide braille or large-print ballots. “Why am I being ignored? They’re still giving me these paper ballots with no braille,” he told PublicSource.

Overall, Darr said the state’s new system is a starting point, but that people with disabilities need a bigger role in the design process. “I think that the tool itself is good. We need to figure out this other stuff around the edges, and the instructions, to make it work,” she said. “I think it’s a really valuable tool and a key to making this accessible for people with disabilities.”

This story was fact-checked by Amanda Su.