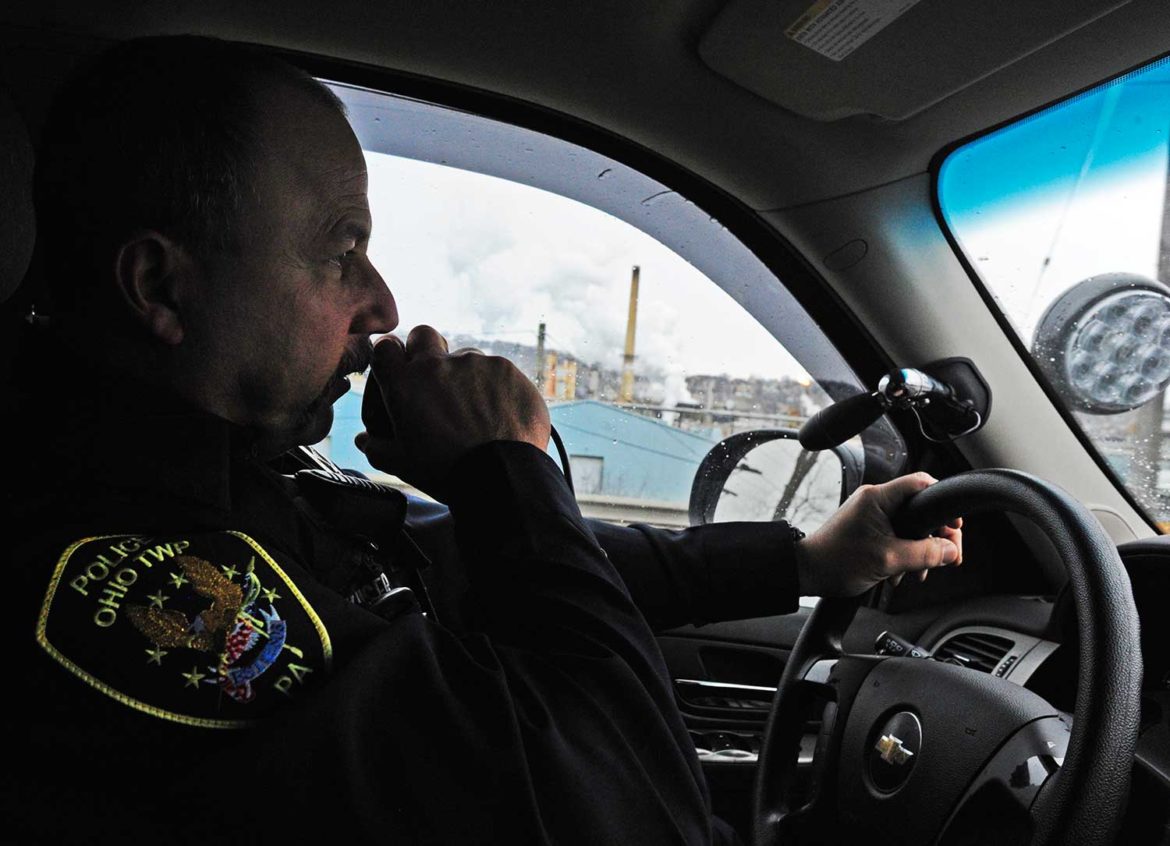 Jan. 22, 2016: Read the Wilkinsburg Borough Council's response to this story.

Decades ago, businesses and residents flocked to Wilkinsburg. It was an upscale area with little trouble. Today, the main streets of the downtrodden borough still wear the remnants of the boom; crime is steady and money is harder to come by for not only the residents, but also local government.

Lined with many vacant storefronts, most people use the borough’s stretch of Penn Avenue only as a thoroughfare. Wood Street is checkered with boarded windows, and the names of former businesses linger — Mel’s Shoe Repair, the African Store, an old sweet shop.

In this financially distressed town, consolidation has become a common term.

Wilkinsburg has relied on the City of Pittsburgh for fire coverage since 2011 and, beginning next school year, Pittsburgh schools also will host Wilkinsburg’s middle and high school students.

Next, the police force for this 2.3-square-mile town could be defunded and consolidated. The idea was raised for the second time at a council meeting in late 2015. It won’t be the last time.

Small towns across the state have been steadily disbanding their police forces for years to save money. In Pennsylvania, there are 2,561 municipalities. Of those, the Pennsylvania State Police cover half, and the agency also provides part-time coverage for 413 other areas. Penn Avenue is a major thoroughfare in Wilkinsburg, a borough east of Pittsburgh that has experienced problems with finances and crime.

From January 2014 through October 2015, 25 boroughs or townships — or more than one a month  —  opted to dismantle their local forces and get full coverage from state police. Most of those had part-time police departments, so they already depended on state police when their officers were not on duty.

Boroughs and townships that can’t afford their own police can depend on the state police and pay nothing. Or they can contract with neighboring communities and pay a fraction of what they did to employ their own officers.

Wilkinsburg Council President Vanessa McCarthy-Johnson said the latest proposal to defund the police force will not be the borough’s last. “This is an issue that will come back,” she said. “Until we are able to bring in money, [disbandment] will always come up.”

Officers and a cash problem

Allegheny County is made up of 130 municipalities. Fifteen of the county’s small towns depend on police coverage from a neighboring borough or township, while two depend on the Pennsylvania State Police.

The reason for breaking up the local police force almost always comes down to one goal: saving money.

In November, the idea was proposed for Wilkinsburg by David Egler, the borough’s finance director, but it was quickly dismissed.

But community members and business leaders can see the value of a community having its own police force.

Kenyon Jewelers on Penn Avenue, for example, has stood its ground for 92 years through business closures and population decline. Douglas Duffus, co-owner and goldsmith of the shop, said he runs a “jewelry place in not the safest neighborhood,” and that it’s common for officers to come in just to say they’re around and on duty. Douglas Duffus, co-owner and goldsmith of Kenyon Jewelers in Wilkinsburg, said he worries the relationships built with officers of the Wilkinsburg Police Department could not be matched if the borough contracted with the Pittsburgh Police Bureau.

Duffus said he isn’t sure whether Pittsburgh police could provide the same service if they consolidated. Duffus said he usually has an officer in his store once a week, and he’d be disappointed to lose the connection between him and the current officers.

“I have a close relationship with some of them and I would really miss the sense of community,” he said.

Though McCarthy-Johnson is “not 100 percent” on either side of the controversy, she admits that the police force is one of the borough’s biggest expenses. But she also supports what the police do for the community.

“[Wilkinsburg] has built such a good department over the years, I don’t want to see it slip back to what it was in the 1990s,” she said.

In 2012, the borough, for the first time, reached out to the Pittsburgh Police Bureau regarding dissolving their own police force.

The reason was strictly financial, according to Wilkinsburg Councilwoman Pamela Macklin.

The people reacted. Macklin said the council chamber was full of residents who supported and “appreciated” the department. After a 4-3 vote, the police force was saved.

“There are always people in a council ... who want to save money, but don’t look at the cost to the community,” Macklin said. “We have changed and have a lot of young police officers who are prepared to have more interaction within the community.”

Of the 15 small towns in Allegheny County that have consolidated and depend on neighboring boroughs, seven of them rely on protection from law enforcement out of Ohio Township.

The township supplies 14 full-time officers and 14 part-time officers to these seven boroughs or townships, including Ben Avon, Sewickley Hills and Kilbuck.

Combined, the officers have more than 16 square miles of jurisdiction.

“What we have been able to do is by putting all of these contracts together, we get one amount of money coming in,” said Ohio Township Police Chief Norbert Micklos. “So the service we can provide for all of the communities is something that a small community can’t provide.” Each individual town’s contract is “tailored” to the needs of the community, Micklos said. Three of the seven towns opted out of a patrol car around the clock and worked out a contract for officers to just answer calls when necessary. Emsworth borough and Kilbuck Township share a patrol car, and the remaining two municipalities each have a single patrol car roaming their streets.

From the seven contracts, Ohio Township receives more than $1 million, and Micklos said that money goes back to the police department.

“I have two full-time detectives, a school resource officer, a canine officer, and 13 fully equipped police cars and great equipment,” he said. “A standalone department can’t do that.”

For Kilbuck Township, money wasn’t always an issue. The town was the site of a 2006 landslide, which led to a costly road repair project, said Harry Dilmore, the township’s treasurer and secretary. Ultimately, the police force was on the chopping block.

For the first four months, Kilbuck relied on Pennsylvania State Police. The coverage was free. In the four months they depended on them, Dilmore said the state police only answered two or three of the dispatched calls, and the rest were transferred to Ohio Township or another neighboring borough. Dilmore said the township was quickly displeased with the services of the state police; every time the state police referred a call to another township, it cost Kilbuck money.

Trooper Adam Reed, a state police spokesman, said townships “certainly” get the same coverage as they would with their own force. The agency says it does so for more than 65 percent of municipalities in the state in part-time and full-time capacities.

In 2007, Kilbuck joined onto neighboring Emsworth’s contract with Ohio Township. Prior to dissolving, Dilmore said the township paid more than $118,000 to employ one full-time officer and other part-time officers.

Kilbuck, on its most recent contract, paid Ohio Township $80,000 a year for full service, according to Ohio Township.

“I’m a big proponent of shared services because that is how small towns survive. I say let’s go together, buy everything together and save money,” Dilmore said.

Micklos, the Ohio Township chief, said that although they aren’t actively seeking to take on another borough, he could see the small neighboring borough of Glenfield, which currently depends on state police, looking to them in the future.

He acknowledged that there can be resistance to consolidation, almost like it’s a betrayal to the community. But Micklos said a new department can and will provide the same services with the same care.

Referring to something like a burglary, Micklos said, “Do you care if it's ‘Sgt. Smith’ from grade school? Probably not. You want somebody to get there and you want them to get there now.”