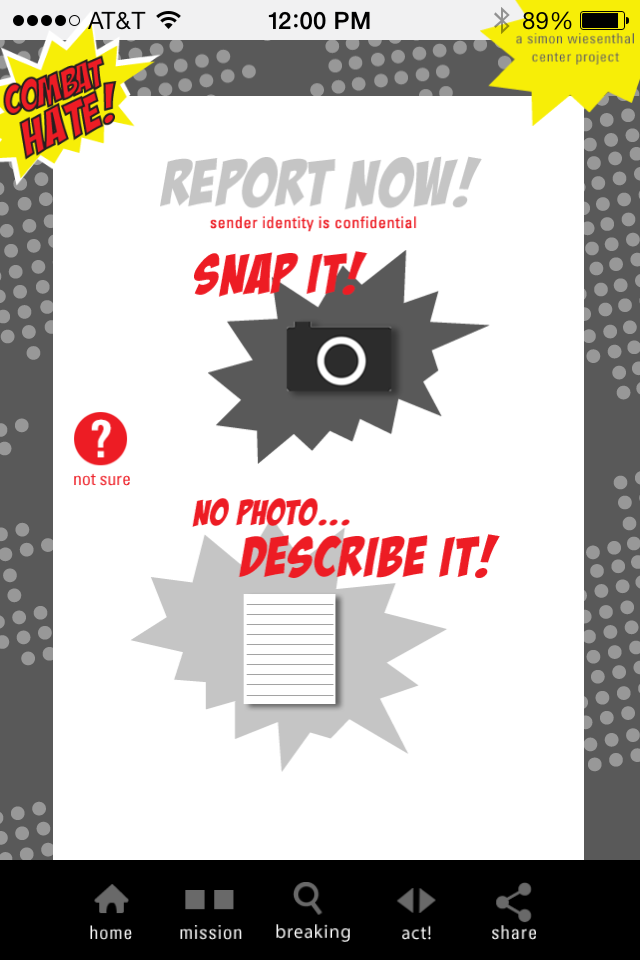 A few months ago I reported on Pennsylvania’s hate-crime law, which no longer protects sexual orientation, gender identity, disability and ancestry.

We had planned to map Pennsylvania’s hate crimes -- a visual representation of where and when these incidents occurred, and who was targeted.

But I learned experts believe hate crimes are grossly underreported. And victims, including those unprotected under the state's hate-crime law, may be reluctant to report incidents to law enforcement because of the lack of legal protections.

Now, the Simon Wiesenthal Center has a new mobile app that may  change the way young people report incidents. The launch of the app occurred at about the same time the Bureau of Justice Statistics released its latest hate-crime data.

As soon as I saw the app, I downloaded it. (It’s free and built for iOS and Android mobile devices.)

The Center said it designed the app with young people in mind. It borrows elements from comic books, including exclamation points, flashy graphics and a caped-figure as its mascot. The app’s users can toggle between screens to learn about the definitions of hate-crime and bullying incidents and how to report them.

Hate-crime laws vary. The federal law is limited to certain circumstances, and some states lack hate-crime legislation altogether. Pennsylvania is among 15 states with hate-crime laws that exclude sexual orientation and gender identity, according to the National Gay and Lesbian Task Force.

But the Center’s app is designed so anyone in the United States can report.

When someone uses the app to report, the researchers at the Center will alert the appropriate law-enforcement agency or school, said Rick Eaton, one of the organization’s researchers, when reached by phone.

“Each scenario is going to be different,” Eaton said. The identities of people reporting incidents remains confidential, he said.

There have been about 200 to 350 downloads since the launch, and the app will have its own Twitter handle in the coming days, Eaton said.

Reporting incidents may help the Center alert law enforcement about crime, create community awareness and tolerance, and track patterns in the data, according to information in the app.

Eaton said the app may include an additional feature in the coming months: a map to visualize the data.

Crowd-sourced data from mobile technology may begin to create a fuller picture of hate crimes in Pennsylvania -- and across the country.