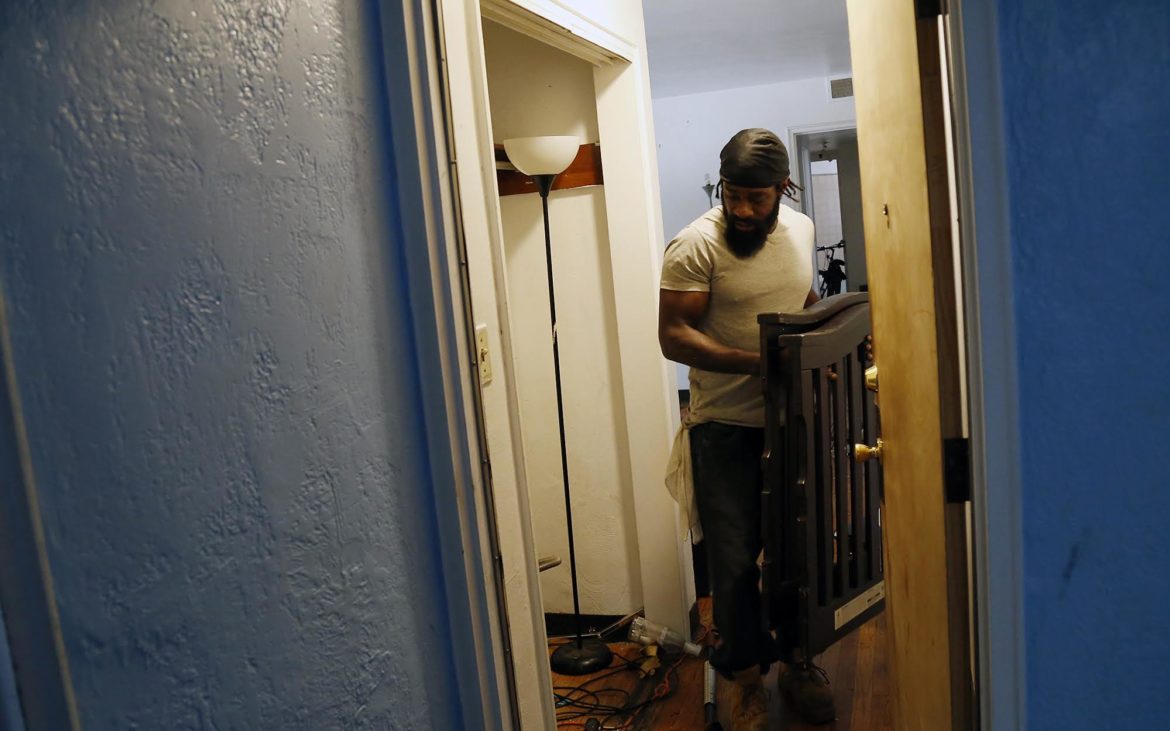 Lawrence Beck moves part of a crib from his Valmar Gardens apartment on Sept. 20, 2018. Beck had lived here for three years and said he is planning to move to an apartment in Swissvale. (Photo by Ryan Loew/PublicSource)

Poor living conditions and mass eviction at Valmar Gardens in Penn Hills have highlighted one way in which absentee ownership fuels blight in the Pittsburgh region.

On short notice, most tenants followed the municipality’s order to leave, though some tenants filed a legal suit to allow residents to remain; the future of about 20 remaining households remains uncertain.

A review of court documents by PublicSource found that the owner, Prasad Margabandhu, has a history of failed buildings, unpaid taxes and bankruptcies associated with properties he owns throughout the region.

Urban design expert Alan Mallach believes Margabandhu was trying to “milk” the failed property by attempting to eke out rent revenue while spending as little as possible on repairs or taxes.

“Basically, it’s all about economics. A landlord wants to get a return on his or her investment,” said Mallach, who has studied Pittsburgh extensively as a senior fellow at the Center for Community Progress in Washington, D.C.

Unlike other investors committed to maintaining and improving properties, the “milker” neglects upkeep and utilizes a variety of legal and bureaucratic systems, such as bankruptcy court and complicated real estate transactions, to avoid liability while still turning a profit. According to Mallach, the impact of milkers can be difficult to track.

Margabandhu denies that his management of Valmar Gardens is part of any intentional or systematic neglect.

When asked about another troubled apartment complex that he'd purchased in 2016, Margabandhu emphasized the point: “There’s no quick money intention there.” 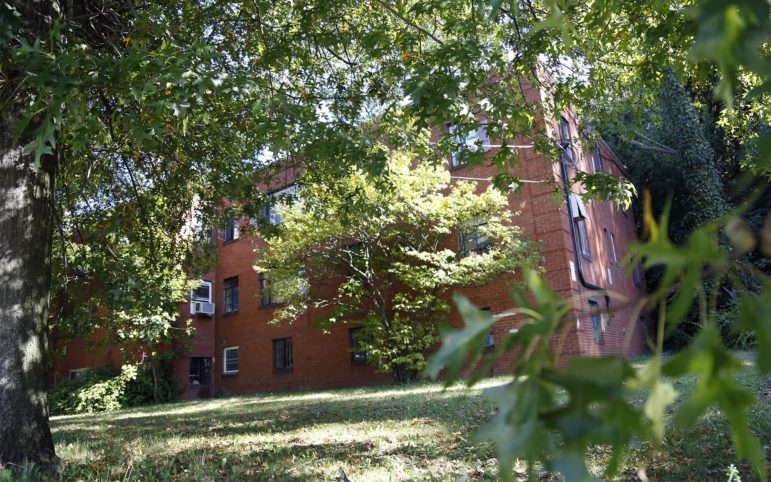 In court cases involving other properties, judges said he has run a “shell game” and “scheme” to avoid creditors while retaining properties. One judge deemed him to be in contempt of court for repeatedly failing to pay fees or appear at hearings.

In the case of Valmar Gardens, Margabandhu paid $1,000 for the complex last January. While some tenants began paying him rent, Margabandhu said the Allegheny County Housing Authority’s refusal to direct subsidized payments to him has prevented him from collecting more than a few thousand dollars worth of rent on the property.

According to Mallach, “milkers” generally invest in indebted, run-down properties in distressed housing markets. Poor housing stock isn’t selling, and the neighborhood’s not attracting much investment.

In such a weak market, this type of absentee owner is less interested in capitalizing on a property’s appreciation over time than in collecting as much rent as possible within a short timeframe. Often they take in tenants who can’t easily rent elsewhere. They then shed the property when it’s condemned or goes into foreclosure, and they file for bankruptcy. Properties fail not because an owner has fallen on hard times or lacks the ability to maintain houses or apartment buildings but because a quick payoff exceeds moderate, upfront costs.

Mallach’s research has determined that many midwest or Rust Belt markets such as Pittsburgh, Detroit and Cleveland appeal to “milkers.” He found that this kind of investor is less prevalent in cities where demand and rents are higher.

“Milkers” were particularly active during the housing crisis, according to Mallach, when so many lenders foreclosed on distressed properties. Growing poverty in a neighborhood can drive a shift away from owner-occupancy to absentee ownership. All of this can encourage irresponsible short-term investment.

Even if that irresponsibility includes delinquency on property taxes, municipalities may not be able to afford the high costs of going after owners, much less maintain properties they acquire through tax foreclosure. Properties become a liability that few investors want. 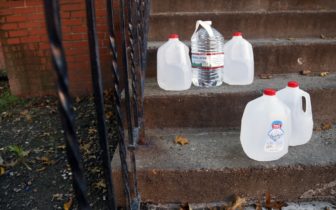 Jugs of water are left for Valmar Gardens residents to take. (Photo by Ryan Loew/PublicSource)

“Milkers” may protect their interests by purchasing properties using a limited liability corporation, concealing their personal stake in properties. They may move properties between corporations they own. When they put a corporation into bankruptcy, other properties and assets are protected. Bankruptcy can stall foreclosure on property liens.

Additionally, foreclosures and other litigation can prevent action against an owner.

For example, Margabandhu’s businesses owed McKeesport and its school district more than $46,000 on three properties and the South Allegheny School District more than $25,000 on another property. A January 2018 court opinion in the U.S. Bankruptcy Court for the Western District of Pennsylvania addressing both delinquencies found that in each case Margabandhu filed for bankruptcy as “part of a scheme to delay, hinder, or defraud” these debtors. “These circumstances demonstrate a clear lack of good faith and have drawn the taxing authorities into a shell game as they chase their security interests, always a step behind.”

Nonetheless, Margabandhu made efforts to collect rent. According to court filings, an associate of his sent tenants a flier notifying them that all rents should be directed to Margabandhu’s PA Real Estate. Margabandhu also called the Allegheny County Housing Authority’s Housing Choice Voucher Program office multiple times last year seeking rental payments for Section 8 vouchers and sent a representative to the program office seeking payment, according to associate director Bobby Gabbianelli.

As property ownership remained unclear, the housing authority decided last March to stop making rent payments for the 34 households receiving Section 8 vouchers out of the complex’s 64 units. The authority began providing them with moving vouchers instead.

According to Gabbianelli, the housing authority has not made payments to Margabandhu for vouchers associated with Valmar Gardens.

LeRoy Jones, who said that he has lived at Valmar Gardens for 17 years, is party to current ligation in which four tenants are petitioning Penn Hills officials to allow remaining residents to stay in their homes. He suggested that, “Once [the landlord] lost that money, everybody’s like, ‘They want everybody out, because we don’t pay a lot.’ But the government pays a big rent.” 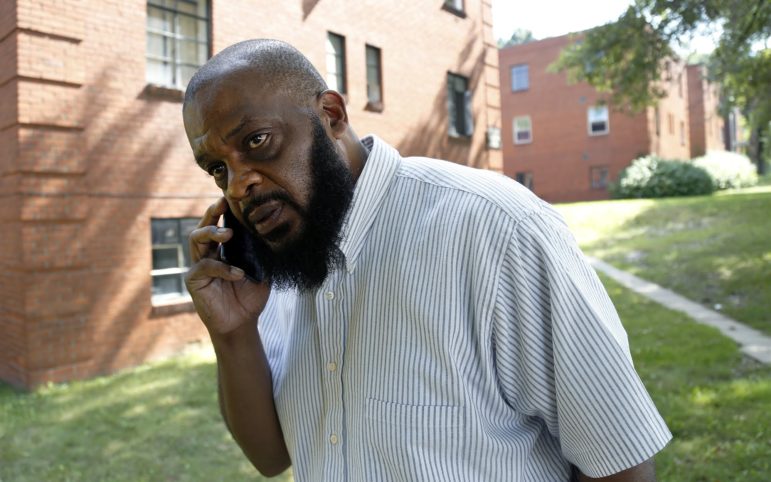 On Sept. 20, 2018, LeRoy Jones was in the process of moving his belongings into storage but hoped to stay at his Valmar Gardens apartment. (Photo by Ryan Loew/PublicSource)

Margabandhu said he received rent payments from only one tenant. “So everybody that’s been staying there [is] pretty much squatting, staying for free,” he said. “I think it’s just sort of a situation where everyone’s taking advantage.”

Margabandhu acknowledged that the property had several code violations when he took ownership of the property. He said he spent $10,000 updating the building’s fire alarm system in early 2018. Margabandhu confirmed that he spent time overseeing repairs at the property after purchasing it.

“And, I mean, paying the bills, that would have been a big thing.”

Penn Hills code enforcement officer Corey Kircher was aware of the ongoing ownership dispute, but he cited Margabandhu’s name on the property's deed and his company's name on Allegheny County real estate listings as evidence that Margabandhu is the property owner responsible for managing Valmar Gardens.

Kircher said he met with Margabandhu on three occasions in 2018 and informed him of the need to apply for occupancy permits for each of the 64 units, a step required whenever a building changes owners. “None of that was ever done,” Kircher said. Permit applications would have triggered a building inspection.

Had he followed this protocol, Margabandhu could have prevented the evictions, Kircher said, adding: “And, I mean, paying the bills, that would have been a big thing.”

Mallach differentiates “milkers” from other kinds of “distressed property investors.”

“Rehabbers” will purchase properties in poor condition then rehabilitate them to turn a quick profit. With a similarly short time horizon, “flippers” buy and quickly resell properties “as-is,” working the market to buy low and sell higher.

In both cases, speculators work within a market just strong enough to turn profits. A fourth category, “holders,” maintain and rent out their properties over several years, capitalizing on both rental income and appreciation.

Investors are able to buy much more properties than community development corporations or municipalities. Still, it’s difficult measuring what portion of failed properties are owned by “milkers,” much as it’s difficult to track these investors in the first place.

Mallach feels strongly that rental registration or licensing could help track and prevent “milking,” as this could require more regular building inspections. In 2015, the City of Pittsburgh passed an ordinance requiring landlords to register their properties, but landlords sued and the ordinance is held up in court.

Land banks have also proven useful in some cities, Mallach said. They enable communities to gain control of foreclosed properties.The Genesee County Land Bank in Michigan, for example, was able to demolish 812 blighted properties in Flint and Genesee County in 2018, structures that might have otherwise been stuck in long and contentious foreclosure processes.

Tim Dolan co-chairs the Vacant Property Working Group, a program of the Pittsburgh Community Reinvestment Group. He’s found that while intentional neglect can be the cause of dilapidation at some properties, blight in a neighborhood can have a variety of causes.

“[N]ot everything that looks abandoned is abandoned,” he said, noting that some property owners may just not have the capacity to maintain their homes. Monitoring of blight can require door-to-door surveys and neighborhood meetings.

“Every neighborhood sort of has a different way of dealing with landlords.”

In many cases, he’s found that writing a letter to the owner will reveal that a low-income owner simply can’t afford repairs. “If paint is peeling,” he said, “which is a violation from the code, are you going to worry about that or feeding your family?”

Neighbors can also file 311 complaints, which can lead to citations and land a property owner in court. To secure delinquent and abandoned properties, community development corporations can access the city’s property reserve, a limited collection of properties identified as particularly strategic for neighborhood revitalization plans.

These are just a few means of fighting blight, Dolan said. “Every neighborhood sort of has a different way of dealing with landlords.”

The Housing Alliance of Pennsylvania has even created a blight “toolkit,” outlining the many ways communities can reclaim blighted and abandoned properties.

Regardless of why a property fails, both Mallach and Dolan emphasized that American law prioritizes individual property rights, so courts and municipalities are slow to take property — a “respect for property rights” that, Mallach said, some landlords “are basically exploiting.”

“You can’t do something to peoples’ properties unless you provide notice … [‘Milkers’ are] creating a situation where it becomes extremely difficult for a city agency or a county agency or anybody to provide the legal notice that is required to take legal action.”