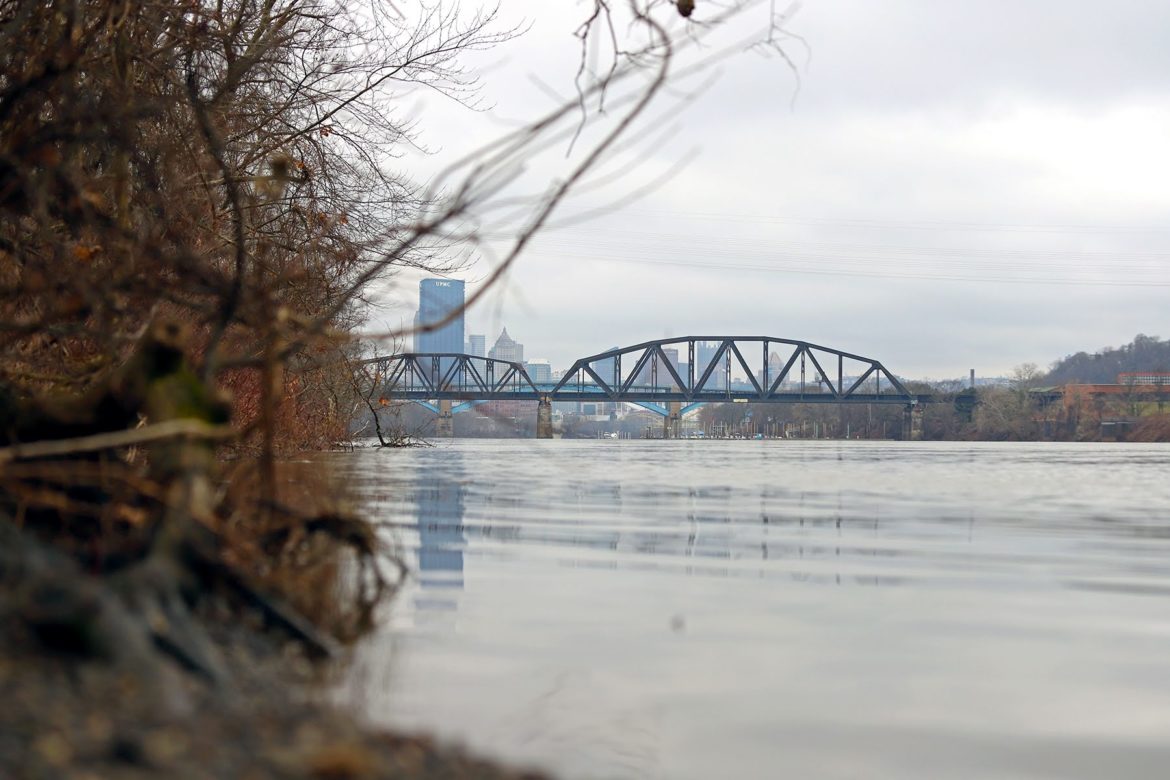 A view of Downtown from the Allegheny River. (Photo by Jay Manning/PublicSource)

Microplastics were found in major waterways across Pennsylvania, according to a study released on March 3 by PennEnvironment. Researchers found microplastics, which are fragments of plastic less than 5 millimeters in length, in all 300 water samples taken from 53 waterways in the state, including seven waterways in Allegheny County.

The study found microfibers from clothing and textiles in all of the waterways sampled. Microfilm from flexible plastics like bags or packaging was found in 94% of samples, and 87% of the waterways had microfragments present from harder plastic products. One body of water had microbeads from cosmetic products.

Microplastics not only contain chemicals that are harmful to our health and to the health of wildlife but can also concentrate toxins that are already in the environment.

The Pittsburgh Water and Sewer Authority [PWSA] currently draws drinking water from the Allegheny River and said they have not encountered evidence that suggests that microplastics are a concern to the current health of the water distribution system.

But environmental advocates say the findings are clear cause for concern.

"The results of this study should set off alarms for all Pennsylvanians who love our state's rivers and streams,” said Faran Savitz, a conservation associate at PennEnvironment. “The staggering amount of microplastics we found likely means that no river, lake or stream is safe from this increasingly common contaminant."

To help you understand the risk of microplastics and what could be done in mitigation, PublicSource compiled key facts and background and checked in with advocates, researchers and the authority responsible for providing clean water to Pittsburgh to hear their perspectives.

The PennEnvironment study looked specifically at four types of microplastics: fibers, film, fragments and microbeads. These microplastics can come from litter, waste in landfills or incinerators. Microplastics are also in a variety of products such as beads in certain cosmetic products or the small pieces of plastic that are used to make new plastic products. Microfibers are shed by clothing made from synthetic fibers when they are worn or washed.

Dr. David Velinsky, the vice president of the Academy of Natural Sciences at Drexel University and a technical consultant for the report, said that the plastic allows for contaminants, like polychlorinated biphenyls [PCBs] and dichloro-diphenyl-trichloroethanes [DDTs], to stick to them and build up. Those plastics are then eaten by the surrounding wildlife and make its way up the food chain.

"Microplastics can potentially accumulate pollutants that are present in the environment at low, low levels,” Velinsky said. “Accumulating or building up these contaminants and delivering them to wildlife that eat or ingest these microplastics that are out there.”

Currently, there are no state of federal mandates for drinking water to be tested specifically for microplastics.

“There's still a lot of plastics in our environment that are misplaced, that are on our streets, in our creeks, on our riverbanks and in our trees for goodness sake. And we need to take care of that.”

PWSA said, in an emailed statement, that they do not test the water for microplastics and have not encountered evidence that suggests that microplastics are a concern to the current health of the water distribution system.

“We do not specifically target microplastics in our treatment process,” said Rebecca Zito, senior manager of Public Affairs at Pittsburgh Water and Sewer Authority. “However, we monitor turbidity levels, which we believe would help detect microplastics.”

However, while treatment plants are able to filter out a high percentage of the microplastics from the water, Savitz from PennEnvironment said that research shows there is no way to filter all of them out yet.

“There are some emerging technologies, but there's nothing right now that is effective to get microplastics out of our environment, there really is no solution,” Savitz said. “The best thing is to cut plastics off at the source."

Previous research has found microplastics across the world, including in difficult to reach places like Mount Everest, the deepest part of the ocean and even the air we breathe.

While research is still being done to understand how these are being consumed, WWF’s report concluded that microplastics were mostly being ingested through drinking water and animals like shellfish.

Myrna Newman, the executive director of Allegheny Cleanways, an environmental organization that focuses on waterway and land cleanup operations, said that, on average, their cleanups remove about three to four tons of plastic and trash a year from waterways in Allegheny County. She estimates it would take decades to remove all the plastic in the environment.

In 2020, Allegheny Cleanways reported that during one of their river cleanups at the Monongahela River they had collected over 4,800 pounds of plastic and trash.

“The reality is that there's a lot [of plastic] in the environment right now,” Newman said. “There's still a lot of plastics in our environment that are misplaced, that are on our streets, in our creeks, on our riverbanks and in our trees for goodness sake. And we need to take care of that.”

Pennsylvania’s General Assembly and local governments are currently unable to enact or enforce any law, rule, regulation or tax on single-use plastics or packaging due to an omnibus bill passed in May 2020. The law remains in effect until either six months after Pennsylvania’s coronavirus-related state of emergency is lifted or July 1, 2021, whichever comes last.

"I think that the big issue for us [Allegheny Cleanways] is that for years, we've been wanting some policies and some procedures and have been working with other organizations, working in collaborations and so forth to get some change. And what this study does is provide some really good, concrete evidence that what we were saying all along, is true. That there is a problem with and potentially, we don't know yet since the research is still out on the impact on human health, but potentially a public health issue with plastics, in our environment." — Myrna Newman, executive director of Allegheny Cleanways.

“Contaminants like DDT, PCBs, and many others are considered hydrophobic, meaning they don't like to be in the water. And because you have these plastics in the water, just like other organics, the contaminants, these PCBs and DDTs like the stick to them. And because these plastics are unfortunately petroleum based, once attached, these plastics can move up the food chain, be consumed by fish, other aquatic organisms, even some birds and would move up the food chain" — Dr. David Velinsky, vice president of the Academy of Natural Sciences of Drexel University.

“We are fortunate to draw our water from the Allegheny River. Since it flows from the north where there is less industry and population, it offers higher quality source water. Additionally, our ability to test for turbidity is continually improving with more precise instrumentation and analysis in our lab… We have yet to encounter evidence suggesting that microplastics are of concern to the current health of our water distribution system.”
— Rebecca Zito, Pittsburgh Water and Sewer Authority senior manager of public affairs.

"We need to fundamentally change the way that society produces and markets the products that consumers buy. We need to change the ways in which we deal with waste in order to tackle this form of pollution. And we need to make the creators of this environmental hazard start to take responsibility for the products that they put in the marketplace.”
— Faran Savitz, conservation associate at PennEnvironment.

"We’ve known for a while now about the harm that single-use plastic causes to our environment, and this report is a startling reminder that plastic — specifically microplastics — threaten our health as well. Curbing our single-use plastic intake is one of the main ways to tackle this problem, and I fully support Philadelphia’s legal challenge against Pennsylvania's municipal preemption of regulating them." — Erika Strassburger, Pittsburgh City Council member.

Philadelphia, West Chester, Narberth and Lower Merion announced on March 3 that they are suing the state for the preemption on plastic ordinances stating that it was unconstitutionally put into the state budget.

Some Pennsylvania Democrats are also pushing for the passage of the Zero Waste for PA legislation as a starting point to reducing plastic waste in the environment.  This legislative package includes measures to prohibit and limit the use of single-use plastics and requiring producers of plastic packaging to take part in a recycling program.

The Break Free from Plastic Pollution Act was introduced in Congress last year. The proposed act includes strong bans on single use plastic bags, as well as polystyrene and includes producer responsibility requirements that would shift waste management responsibility to producers of plastic.

As Pittsburgh region increases plastics production, a leading scientist asks: How much of it will get in our water sources?

A plateful of plastic: Visualizing the amount of microplastic we eat

Many Pittsburgh-area plastics end up in landfills or the environment. Is recycling a solution or only a patch?

Good River: Stories of the Ohio

Danielle Cruz is a PublicSource editorial intern. She can be reached at danielle@publicsource.org