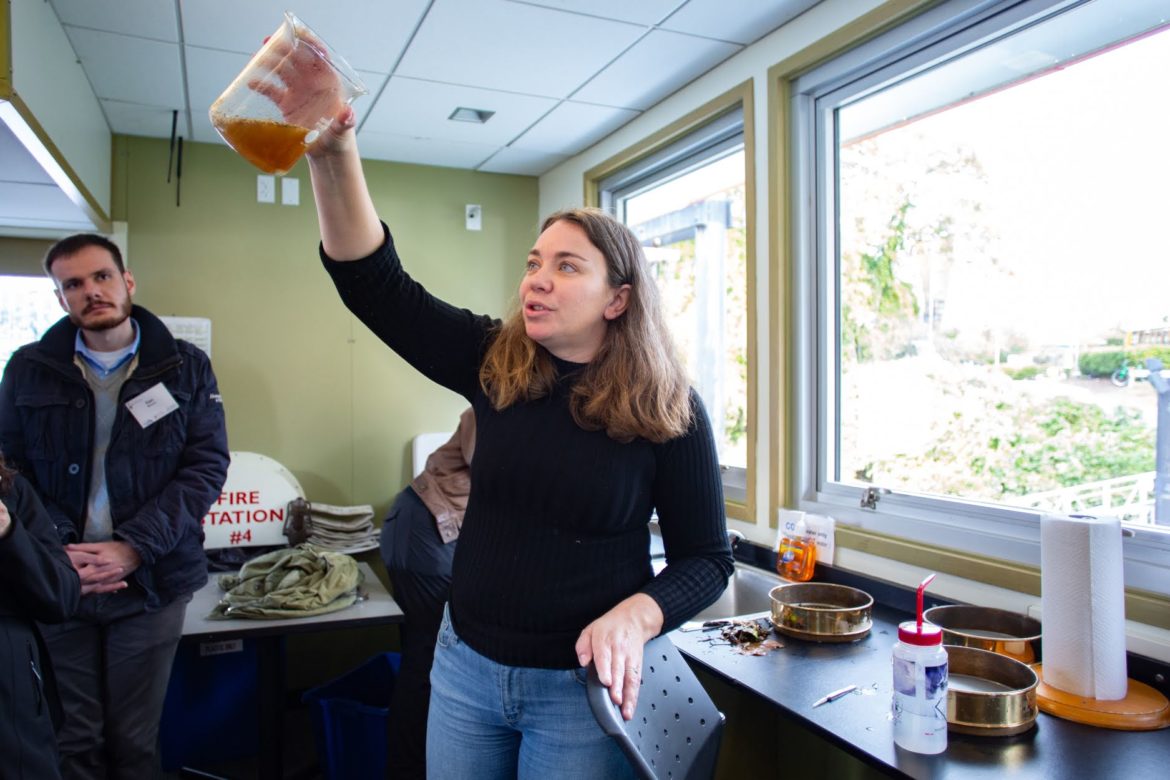 She spends her summers on boats sifting the water for plastic and her winters analyzing it in labs. She looks for it in tap water, fish guts and sea salt. She once saw someone throw a plastic bottle out of a car window and angrily chased after the car, much to her daughter’s chagrin.

On Wednesday morning, as the professor of chemistry was trying to give a talk about her research on microplastics, she stopped mid-sentence to point out another shiny plastic bottle in the distance, floating along the Ohio River near Point State Park.

“I’ve seen a few different pieces since we’ve been talking. It’s a sickness at this point,” said Mason, who teaches and conducts research at the State University of New York at Fredonia.

On the morning boat tour with about 30 interested teachers and students from local schools and colleges, Mason planned to test the river for microplastics — which can be smaller than a millimeter and can enter the human body. 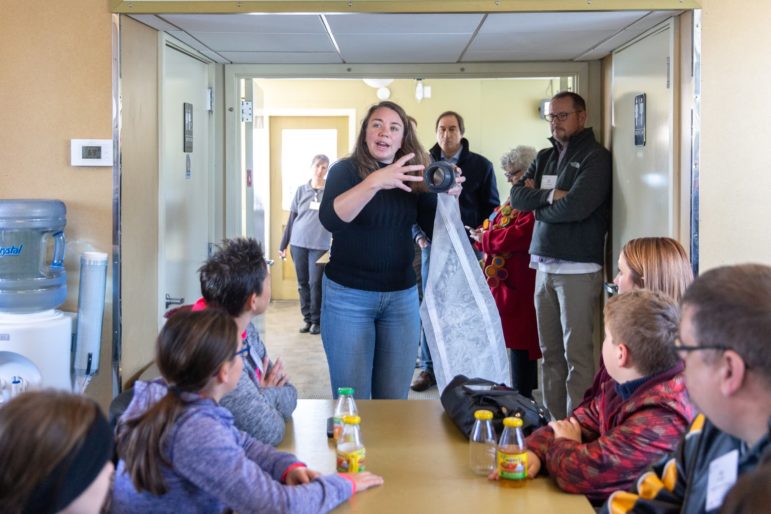 Heinz Award recipient Sherri Mason explains to students how a Neuston net helps her capture samples of microplastics from rivers and lakes. (Photo by John Altdorfer/PublicSource)

Little testing for microplastics has been done in Pittsburgh’s rivers. She was confident she’d find some plastic. But how much?

Mason hoisted a large net over the side of the boat. Ten minutes later, she pulled it back up and looked inside.

She pulled out a tiny piece of plastic and held it up.

Just under 2 miles away at the David L. Lawrence Convention Center, the acting administrator of the Environmental Protection Agency, Andrew Wheeler, spoke to a shale gas industry conference. For many of the attendees, the abundance of natural gas in the region and the growing infrastructure to produce plastics with it is a ripe business opportunity. The construction of Shell’s ethane cracker plant in Beaver County is already well underway.

Meanwhile, Mason is looking to figure out where all this plastic is ending up and how it may be impacting our health.

Although microplastics on their own may not be that dangerous, Mason said, they are often coated with chemicals that have been connected to cancers and can disrupt the body’s hormones.

After Mason began researching microplastics in 2012, her work led the Food and Drug Administration to ban plastic microbeads in face creams and shampoos. For that accomplishment, she earned a Heinz Award for Public Policy. 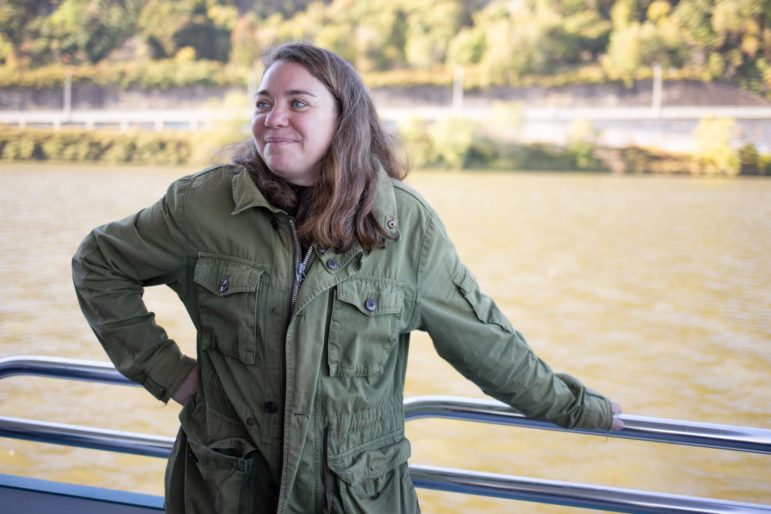 Sherri Mason waits on the deck of the Rivers of Steel “Explorer” research boat as she collects samples of microplastics from the Ohio River. (Photo by John Altdorfer/PublicSource)

Scientists like Mason are finding tiny bits of microplastics are everywhere. It’s in the ocean and the lakes. It’s in tap water and drinking water. It’s in beer and fish. A study published this month found it in human excrement.

“At that point, you are ingesting plastic,” she said. “You are breathing it in. It’s in the air, it’s in the water, it’s in the soil. It’s everywhere.”

In some of her most recent research, Mason found an abundance of tiny plastic fibers from clothes, like polyester, in fish. Sewage plants don’t filter it out, so it likely ends up in our water and gets eaten by fish, where it gets caught in the gut.

And this is a problem, she said. “The longer it’s in the organism, the greater the potential for the chemicals to move inside the organism.”

To figure out how much plastic is in the water sample caught by her net, she filtered out the biggest pieces of leaves and wood using a sieve. “A lot of what we pull in is not plastic. It’s a lot of life, a lot of nature,” She said. “And that’s what we have to sort through.” 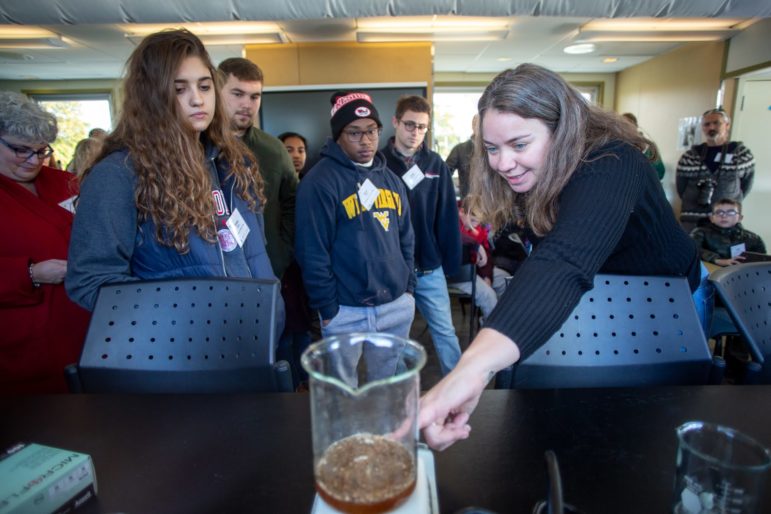 Her net filters out pieces larger than a third of a millimeter so she can focus on the smallest pieces. But some of the plastic that worries her most is even smaller. The smallest pieces are the ones that can pass through into people’s organs.

Mason burned up all the tiny bits of wood, leaves and other organic materials with a hydrogen peroxide solution. The process allows her to count up how many pieces of plastic she can see through the microscope.

But there wasn’t enough time to finish this process before the tour group had to leave.

There are way more potential studies of microplastics to be done than she has time to do right now, she said.

While she tends to focus on plastics in the water, the vast majority of the more than 8 billion tons of plastic that has been produced in the world is still unaccounted for.

One of the places it is likely ending up is in the sediment at the bottom of bodies of water. In theory, over time, if people can stop plastic from entering the water, Mason said, this sediment layer will be covered over with other rocks and dirt and eventually disappear.

But right now the layer is getting thicker. In 2015, the world produced more than 320 million tons of plastic.

There may not be a good solution for filtering out these plastics, she said. “The real solution is long term, reducing our use of this material,” she said. “It’s changing policies and it’s changing manufacturing.”

It can get discouraging, she said, to think about how prevalent plastics are in our current culture. To avoid plastic waste, Mason said she takes washable dishes with her to parties. She buys bananas without any extra wrapping. She feels that these kinds of personal choices, along with policy and manufacturing changes, can eventually reverse the 70-year habit of plastic disposables.

“The real solution is long term,” she said. “It’s hard to go to the store and buy anything that is not in plastics.”