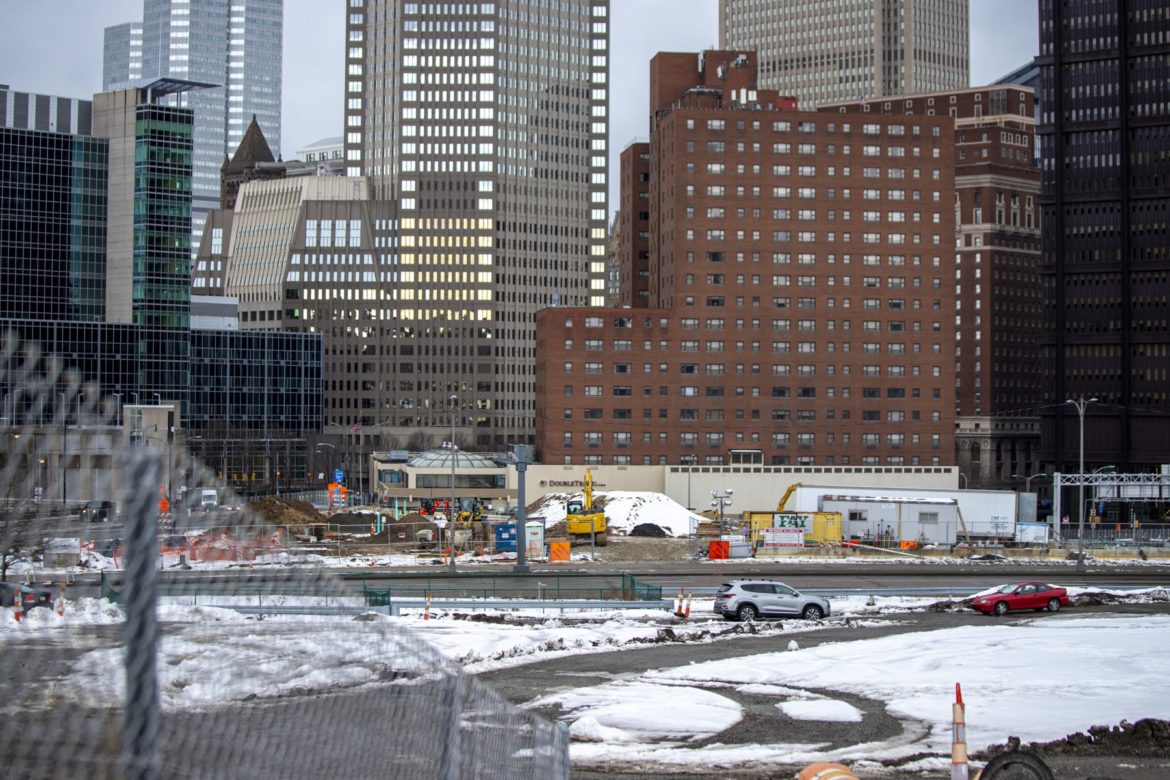 View from February 2021 of Downtown Pittsburgh, the emerging Cap Park and part of the site of the former Civic Arena, where the Penguins are leading a redevelopment effort. (Photo by Jay Manning/PublicSource)

A change to an obscure boundary that may benefit the Penguins’ Hill District development hopes crossed procedural lines with important assists from the United Steelworkers union and others, but not from a neighborhood group that fears a resulting loss in federal funds.

The Census Bureau, in February, placed the former Civic Arena site in the same tract as part of the Hill District, rather than its prior affiliation with Downtown. That could open up the 28-acre site to private funds lured by the federal Opportunity Zone program, which allows capital gains tax breaks on investments in 8,760 designated tracts  — including the Hill’s — nationwide.

The shift occurred without input from the Hill Community Development Corp., which is concerned that it could ultimately jeopardize neighborhood access to other resources — like federal Community Development Block Grant dollars — that are awarded based on the economic conditions in tracts. If higher-income residents move into the arena site, Hill CDC leaders worry, the area may no longer qualify for important aid streams.

PublicSource filed a Freedom of Information Act request with the Census Bureau in an effort to trace the circumstances of the tract change.

Tract boundaries are meant to help to recognize changes in local circumstances, and also affect the flow of federal funds. Documents provided by the Census Bureau, and subsequent interviews, show a twisted path to the line change, including missed deadlines, a meeting in the White House and guidance from the top of the bureau’s hierarchy, culminating in a bureaucratic change that could affect the Hill for years to come.

"It will attract investment to the Hill District," said Penguins Senior Vice President and General Counsel Kevin Acklin. “You can put that Opportunity Zone money to work to invest in affordable housing and small businesses,” and any risk of gentrification can be controlled by the community and local government because much of the land is publicly owned, he said.

Hill CDC President and CEO Marimba Milliones did not respond to requests for comment.

Here’s how the bid to make the arena site an Opportunity Zone was won.

Why write to Wolf? The federal Opportunity Zone legislation, passed in 2017, gave governors responsibility for choosing eligible economically distressed tracts. While Hill District tracts were included, Downtown Pittsburgh was not, so the arena site was locked out. Peduto’s letter supported unspecified action to make the site eligible, but didn’t suggest a tract line change.

The Treasury Department formally designated the Opportunity Zone tracts in 2018, following receipt of state recommendations. But the Treasury had no authority to add or subtract tracts. Tract boundaries weren’t mentioned. Those lines are drawn by the Census Bureau, part of the Department of Commerce.

Step 3: A key union takes it to another department, and to the White House

The concept of moving the tract boundary appears in a July 2019 letter from USW International President Leo Gerard to then-Commerce Secretary Wilbur Ross. The letter — written in the weeks before Gerard’s retirement took effect — asked that Ross assign a senior staff member to “take a serious look at the proposal to adjust the census tract on the Lower Hill.” Gerard also mentioned unspecified “obvious political implications” that could come from administration support for a tract boundary change.

No one interviewed for this story could specify the exact genesis of the USW’s involvement. "We were at that point raising the profile on the project with the unions and other stakeholders,” said Acklin.

Gerard did not respond to requests for comment. USW spokeswoman Jess Kamm wrote in response to questions that Gerard's involvement stemmed from his belief that "real, meaningful development in the Lower Hill will benefit everyone, not just businesses but also the residents of the Hill District and the city at large" in part by employing Black workers in an underserved community.

Unusual among Democratic-leaning unions, the USW had a nuanced relationship with the Republican Trump administration. Gerard made statements praising the Republican president's tariffs.The union ultimately endorsed Joe Biden in 2020, which some conservative commentators characterized as a reversal.

Gerard wrote that the idea of re-drawing the tract lines emerged from a meeting with a counselor to Mnuchin. After that meeting, Gerard and an unspecified team went to the White House, according to his letter.

Reached by phone, one of the involved presidential assistants, Alexander Willette, said he remembered a meeting with Penguins’ officials, but did not specifically recall USW involvement. He did not recall that he was “fully briefed” prior to it. Willette, who was a deputy director of political affairs for outreach, said his role was akin to an “air traffic controller,” guiding constituents to the right departments.

The other two special assistants to the president who were in the meeting did not comment.

Willette said he did not recall any political discussion during the meeting, adding that anything of that nature would have been directed to the Trump campaign.

Step 4: A top official outlines a ‘general rule’ — and a work-around

Conversations between Washington and USW continued, according to a subsequent letter from Census Bureau Director Steven Dillingham to Gerard’s successor, Thomas Conway. In it, Dillingham threw cold water on the tract redrawing suggestion, noting: "Census tracts, as a general rule, are not revised to accommodate changes in policy or funding programs.”

PublicSource reached out to the Census Bureau but the agency did not address questions by deadline.

Step 5: A deadline is fudged

According to Dillingham’s account, a deputy chief at the bureau steered Gerard toward the decennial PSAP, in which regional Metropolitan Planning Organizations [MPOs] compare existing census tracts to federal guidelines. The MPOs can recommend changes to tracts in which populations have shifted outside of the range of 1,200 to 8,000 people. (The ideal tract size is around 4,000 people, or 1,600 households.)

Dillingham’s letter does not mention that the deadline for submission of changes had passed even before Gerard wrote to Ross.

The Southwestern Pennsylvania Commission [SPC] handles the PSAP process for 10 counties, including Allegheny. The deadline for submissions was in June 2019, and the SPC had coordinated with the counties and submitted “a bunch” of changes to the Census Bureau, according to Kristin Baum, a senior data analyst for the SPC.

County Development Director Lance Chimka said the Penguins reached out, asking for help with the Hill District tract boundary. He said he saw both the economic development implications of the Opportunity Zone program and the value in fixing a boundary that looked “gerrymandered.”

“There was time to move very, very quickly and get this in,” via the PSAP process, he said. “And so we made that request to the SPC to have that [tract] included in the process.”

Baum said that even though the deadline had passed, the Census Bureau told her it would consider a late request, as long as it didn’t push a tract beyond the desired population ranges. Because no one lives on the Civic Arena site, it does not affect tract populations, so SPC submitted the request.

On Feb. 2, 2021, the Census Bureau released new tract boundaries for Pennsylvania, with the Civic Arena site grouped with the Hill, rather than Downtown.

"We were surprised at the end,” said Acklin. “We thought it was a dead issue.”

The Penguins development team now includes Clay Cove Capital, a Philadelphia-based, minority-owned firm with experience in Opportunity Zone investing. Acklin said the development team has fielded calls from interested investors from all over the country. He said that even a $5 million or $10 million infusion of investment spurred by the Opportunity Zone status could spur several times that level of investment in projects throughout the Hill.

The Hill CDC has protested that the change was made without community involvement.

Acklin said that in the absence of a clear process for addressing tract lines, the development team's focus in 2019 was on enlisting elected officials. "We certainly welcome the Hill CDC and other Hill-based organizations to come together and help make sure the entire Hill District benefits from the Opportunity Zone, which always has been our mission."

On March 31, the Hill CDC released a set of proposals that included:

Acklin provided an April 2 email inviting collaboration with the neighborhood on the Opportunity Zone fund.

The tract change adds a new complication in the run-up to as-yet-unscheduled City Planning Commission consideration of plans to build a tower, anchored by First National Bank, next to the new tract border. The commission typically weighs heavily the input of registered community organizations like the Hill CDC.

The Hill CDC has repeatedly said the development plan failed to comply with the Greater Hill District Master Plan and didn't deliver the level of community benefits outlined in a 2014 Community Collaboration and Implementation Plan.

The tract boundary shift is, in some ways, a welcome change that exemplifies a procedural problem, according to state Rep. Jake Wheatley, D-Hill.

“We’ve always owned that [arena site] as part of our neighborhood and our domain. So in that vein, having them put the census tract in the Hill District is something that I agree with,” Wheatley said.

He added that there should have been conversation with the community, including consideration of potential loss of other federal funds, before the change was requested.

“We need to create a special zone, so to speak, and we need to monitor the impacts that are happening because of this change,” Wheatley said. “Everyone who is involved in making that change happen now has to be involved in making sure that any negative impact, and potential future impacts to the residents of the Hill, are mitigated.”