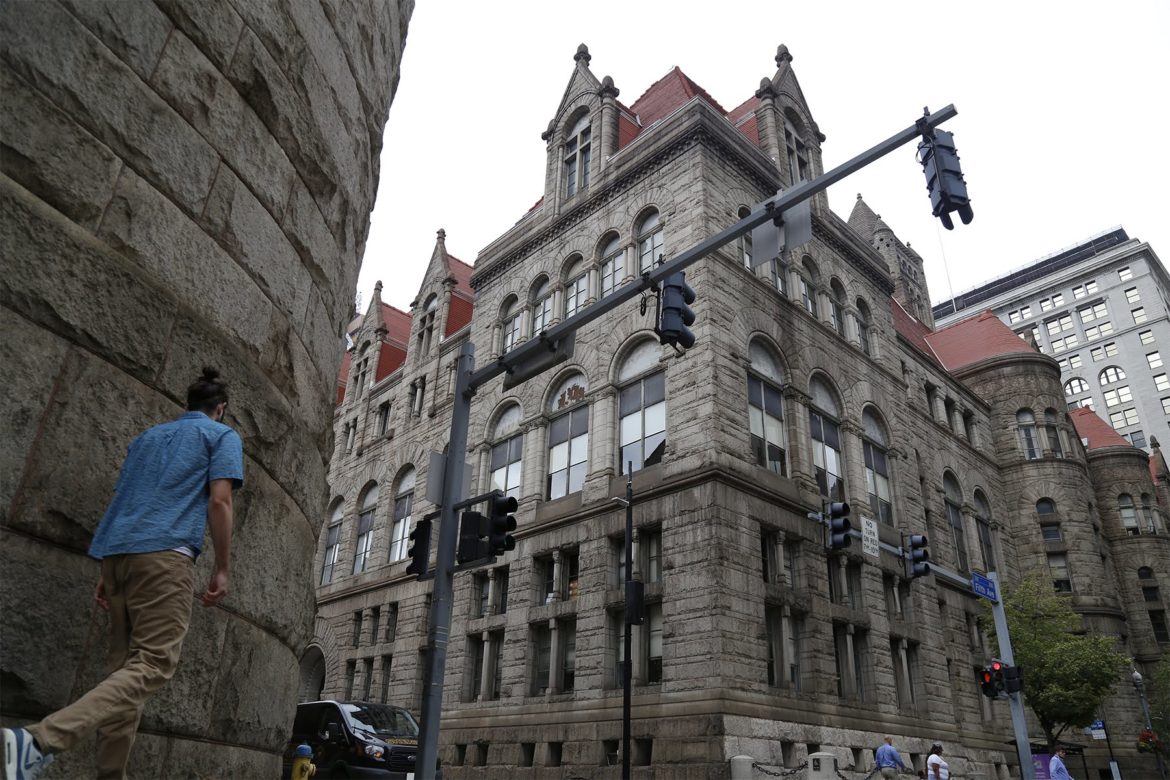 Sheriff’s sales take place on the first Monday of every month in the Gold Room at the Allegheny County Courthouse. (Photo by Ryan Loew/PublicSource)

While they don’t have much money for a home investment, Jaime said, they do have the knowhow necessary to renovate a property to rent out for extra cash. They’d never attended a sheriff’s sale but had heard from a friend that it could be a good place to get a deal on a property.

On May 6, equipped with a small list of properties across multiple areas in which they were interested, they walked into the Allegheny County Courthouse for the monthly sheriff’s sale. They didn’t walk away with a property.

“Considering we just went there to see what it was like, it was a little disappointing, but it wasn’t tragic,” Jaime said. “It was very educational.”

They didn’t bid on anything. One house appealed to Jaime because of its location in Millvale, but they felt overwhelmed and intimidated by the process. The bank won the bid, which the couple thought was inevitable.

While Allegheny County sheriff’s sales often catch the eye of folks looking to purchase property for cheap, it’s often an uphill battle for individual buyers without large amounts of cash on hand.

A sheriff’s sale is a county-run auction in which properties that have been foreclosed on are up for sale to the highest bidder. Sometimes that’s a first-time buyer looking for a cheap property; sometimes it’s a seasoned developer or a bank. Properties, which sometimes have unpaid taxes and standing code violations, can be purchased cheaper than on the real estate market, but success depends on who else is bidding and the size of their pocketbooks.

Who purchases properties at sheriff's sales in Allegheny County?

Sheriff’s sales take place on the first Monday of every month in the Gold Room at the Allegheny County Courthouse.

From January through May this year, revenue from the sales totaled nearly $11 million, which goes to debts, taxes and other costs.

In 2018, Allegheny County collected more than $27 million in sale revenue. The county distributes more than $1 million of this money to pay for advertising of the sales, $7.5 million to municipalities and school districts, almost $2 million for attorney fees, nearly $15 million for third-party litigants, and $1.5 million for county taxes, according to Louis Takacs, spokesman for the Allegheny County Controller’s Office.

Properties generally end up at sheriff’s sales in Allegheny County following foreclosures, and can sometimes go without being sold for months. Back in September 2018, the Pittsburgh Post-Gazette reported that Century III Mall filed for bankruptcy. Because the owners filed for bankruptcy protection, sheriff’s sales kept getting delayed. Recently, the owners decided to demolish the mall and redevelop the land.

Some individuals have success stories at sheriff’s sales. Evaline and Eric Lazor, ages 56 and 59 respectively, were looking at prospects for a retirement home at the May 6 sale. While Evaline said she had no clue what to expect, they walked away saying they were satisfied with a property they bid for and secured in Monroeville.

Others leave disappointed. Mimi Langer, a 55-year-old McKeesport resident, helps her husband run an auto and boat detail shop and has been selling a hodgepodge of items like toys and jewelry at flea markets for more than two decades. She went to an Allegheny County sheriff’s sale in 2009 after hearing about it in The Daily News, a now-defunct McKeesport daily newspaper. These days, the county advertises sheriff’s sales in the Pittsburgh Post-Gazette and Pittsburgh Legal Journal.

“It seemed like it was impossible for an average person to walk away purchasing a house from there,” she said.

Langer hasn’t gone to another sale, but she knows that community members may still be interested. She runs a community Facebook group for the McKeesport area and has posted information about sheriff’s sales over the years because people looking for cheap housing kept asking about it. She said she thinks they figured they could get a deal on housing at these sheriff’s sales — for Langer, at least, it didn’t happen.

Dan Sullivan has spent more than 20 years working with mortgage lending and financial counseling. He is a mortgage foreclosure prevention specialist at the affordable housing nonprofit ACTION-Housing. He’s seen the dynamic change in the circumstances that lead people to lose their homes to foreclosures.

“When I first started, mostly it was folks who were unemployed, they lost their job or there was an illness in the family and something to that effect,” Sullivan said

Now, people struggle to keep up with rising expenses like housing and healthcare costs at jobs paying less, and in two-person homes, both are expected to work, Sullivan said. 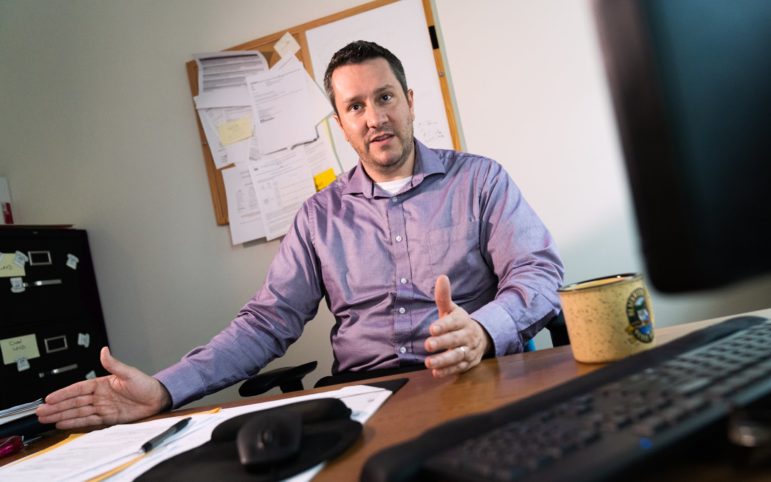 Dan Sullivan, a mortgage foreclosure prevention specialist for ACTION-Housing, has seen the dynamic change in the circumstances that lead people to lose their homes to foreclosures. (Photo by Terry Clark/PublicSource)

Property ends up at a sheriff’s sale after a multi-step process, Sullivan said. First, homeowners receive a complaint of foreclosure. Often a few months pass until a default judgement is filed, and then, third, a sheriff’s sale appearance is scheduled for the property, which could take another 60 to 90 days, depending on the case-by-case differences among factors like the property and the firm.

In Sullivan’s view, a sheriff’s sale is not generally a good venue for buyers looking to find an inexpensive home. According to the county’s rules, anyone who successfully wins an auction must pay 10 percent of the final price immediately after the bidding and then the rest with cash, money orders or cashier's checks on the following Friday. Individuals often compete with banks.

“For a private individual who doesn't have any capital and is having difficulty getting qualified for a mortgage, I would not believe the sheriff’s sales are the place to buy a property,” Sullivan said.

Gina Dascola, a sergeant with the sheriff’s office, disagreed with the notion that banks and large real estate players at Allegheny County’s sheriff’s sales crowd out ordinary people looking for a house-flipping project, or even a home for themselves.

“We have all kinds of individuals who purchase Sheriff Sale Property,” Dascola wrote in an email to PublicSource. “There are those that have more funds to purchase properties that may buy more than others do because they have the means to do so.”

Among the major players are banks looking to regain losses from foreclosed homes, according to Leon Haller, a Harrisburg-based attorney of Purcell, Krug and Haller who generally represents lenders in foreclosure cases, including in Allegheny County.

“For a private individual who doesn't have any capital and is having difficulty getting qualified for a mortgage, I would not believe the sheriff’s sales are the place to buy a property.”

In his view, homeowners have typically given up on a property by the time it gets to a sheriff’s sale.

“They can’t afford it, or they just don’t care anymore, or they’ve left,” Haller said.

Sullivan noted that most properties are not sold, and lenders often obtain the deeds at sheriff’s sales.

As a property sits in foreclosure, a bank's losses increase, raising the ticket price to levels that can be unattainable for private citizens, Sullivan said. Banks benefit by competing in sheriff’s sales because it allows them to get the property back on the market, allowing for a chance to get back money lost due to the foreclosure.

The result is that individuals and other buyers may not be able to find a good investment.

Though Jaime and her husband didn’t have a great experience at the sheriff’s sale in May, she hasn’t necessarily given up on it. She said they now understand how the sales work and may go back.

“Maybe when we save a little bit more money,” she said with a laugh. “I wouldn’t totally rule it out.”

This story was fact-checked by Tom Lisi.

Special thanks to Anne Wright and Paul Dille at Carnegie Mellon University's CREATE Lab for help on the EarthTime map included in this story. Nora Mattson fact-checked the data for the map.