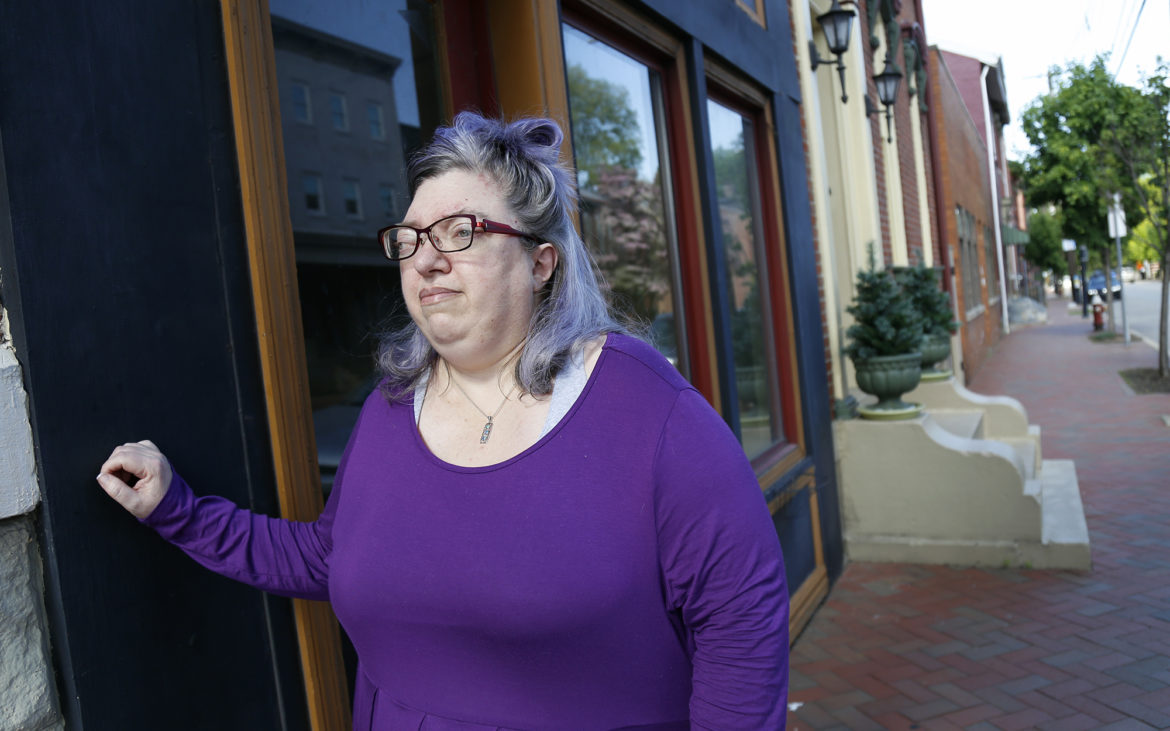 Sue Kerr worries that the experiences of LGBTQ elders in the Pittsburgh area are being lost to history. Kerr stands outside the former location of K.S. Kennedy Distinctive Floral, a gay-owned business on North Side that closed after proprietor Kerry Kennedy died in July. (Photo by Ryan Loew/PublicSource).

I looked around the room and asked, “How many of you have ever attended a Pittsburgh Pride that wasn’t held on Liberty Avenue?” PrideFest had been held there since 2007, but before then, Pride was held in various neighborhood parks and streets throughout the East End. The only person to raise their hand was my own partner. She was 53, I was 46.

We were part of a community conversation on the history of Stonewall led by a local group of young queer activists, the Fair Moans. It was June 2016.

No one else in that room had experienced marching through Downtown Pittsburgh in the early or mid-1970s while hecklers gathered and without any protection of law or visible allies.

They didn’t know a Pride without famous music headliners because no one would headline such an event. They didn't know the modest Pride festivals before corporate donors or vendors were footing the costs. They didn’t remember a time when no elected official or politician would come near the event, much less speak to the crowd.

They never had the grassroots Pride experience of workshops throughout the city with panelists donating their time and talent to build community. Dance parties and tea dances and film screenings dotted the calendar. Their stage was never an open mic, where any speaker had the opportunity to address the crowd for a short period of time or any interested local performer could share their music or poetry before the largest gathering of LGBTQ people in the region without gatekeepers or entry fees or content constraints.

I was fortunate to participate in some of these experiences of Pride, many of which served as a gateway to Pittsburgh’s rich LGBTQ history. In 2015, I launched The #AMPLIFY LGBTQ project, describing our stories in our own words through a question-and-answer format.

Collecting the first-person history of community elders in particular has highlighted the disconnect among generations and opened my eyes to experiences from Pittsburgh's queer past I had never considered before the project, experiences that I now realize must be preserved.

The contributions are marvelous in their unique and sprawling descriptions of coming out, political opinions and assessments of pop culture. Contributors range from age 18 to 75, identify as part of the LGBTQ community and have a self-defined significant tie to Western Pennsylvania.

One contributor described his coming out experience during the John Kennedy administration in the early 1960s. But for my purposes, I define elder as anyone over 45 because of accumulated wisdom and life experiences.

Elders shared a variety experiences. Some wrote of the time when when there were no activities for LGBTQ youth and adults could barely navigate everyday life safely. Bars provided the main refuge for people of age.

“This was during a time when there was a light in the back of the bars, and when it came on that meant the police were on their way in the front door, busting heads and harassing us. It was very brave to walk into a gay bar, but braver to walk out. That’s when you could get hurt or arrested.” — Jim, 63 at the time of this September 2016 entry.

“My coming out experience happened in the late ’60s with my sisters when I was in my teens right out of high school. [My] older sisters pulled me into one of our bedrooms to tell me about the dangers of having sex with men, (and this was before AIDS even appeared) that it was against the Bible and on and on. I let them know that I was keeping myself safe. The conversation ended there.” — Norman, 67 at the time of this April 2016 entry.

For a significant portion of our elders, coming out was something that happened much later in life for a myriad of reasons. Despite social stigma, it sometimes went more smoothly than expected.

“It took me many years to come out. I was 49 when I finally was able to be honest about myself. I was aware that I was gay since my early 20s, but for many reasons was not able to accept it. I was married, the father of two children and clergy in a non-supportive denomination. I did find support from the musician in my church who became a lifeline for me in the process.” — Jeff, 66 at time of this October 2015 entry.

Racism manifested itself and shaped the emergence of the general LGBTQ community.

“[W]estern Pa. has been my home for 25 years. I lived here longer than anywhere else in my life. I’ve learned to survive in a place where there was absolutely no one like me. At all. There were no trans people, no gays, no femme men, not even Latino or any other ethnicity.” — Jez, 50 at the time of this September 2017 entry.

Elders shared the experience of surviving the AIDS epidemic and witnessing its toll firsthand.

“The first ‘gay’ person I ever met was my dearly departed Uncle Randy. Randy passed away from AIDS. Growing up, even though I was from an extremely small town, I knew love and tolerance because I knew that Uncle Randy was ‘different,’ and we loved him because he was ‘unusual.’ I didn’t know until I was much later exactly why people thought he was so unique.” — Viva, 49 at the time of this December 2015 entry.

Long before gender identity was part of our conversation, our transgender siblings experienced multiple levels of oppression in the gay and lesbian community at the time. The world talked about the gay community and lesbians but rarely acknowledged (much less validated) bisexual, queer and transgender identities. We see this playing out again as LGBT-identifying folks are struggling to embrace non-binary gender and sexual identities.

“I am a trans-woman that transitioned after 30 years of marriage and two children. Challenges were keeping my family together and staying employed. For my family, only my son speaks to me and I’m estranged from my wife and daughter. Oddly, I am still in contact and see my in-laws but much of my family has rejected me.” — Caiolin, 56 at the time of this February 2017 entry.

“I was the first person to come out as Transgender at work. I work in a steel mill...the word got out fast (inside and outside the mill). There was no LGBT support at the time when I came out. Some co-workers wouldn’t sit in the same room as me when I came out and the women started a petition to stop me from using the locker room after I had my [gender reassignment surgery].” — Sabrina, 50 at the time of this December 2015 entry.

During 2018, our region lost some of our LGBTQ elders. I can think of five individuals who have passed in 2018 and only two of them have recorded their experiences in our archive. But all of them have obituaries documenting at least a fragment of their lived experience. I can name at least a dozen people whom I know that have no such legacy of their LGBTQ identity, either because it was erased or never visible. That doesn’t mean it wasn’t real.

We don't have a central memorial space or event or list to honor those we’ve lost in our community. And we lack any real repository to capture the breadth and depth of their experiences. Recently, I was contacted by friends of a recently deceased contributor asking me if I had documentation on specific transgender projects that he worked on in his younger days. I did not, but I did realize that they wrote to me because of his AMPLIFY contribution.

Collecting the first-person history of community elders in particular has highlighted the disconnect among generations....

I daresay that having a space to read these stories is what is needed — to remember that our history is bound up in so many local and micro experiences as much as the Stonewall Riots in New York City and the AIDS Coalition to Unleash Power. And where can we find such a space in our region?

There are other projects similar to mine, including In Sisterhood, The Pittsburgh Queer History Project, the Pitt Special Collections and national repositories such as the LGBT Community Center National History Archive and Queer Appalachia. Philadelphia is home to The Gran Varones. We have physical archives of our community newspapers, but the digital archive is gone. It could be restored, but that requires funding and time. Who has much of either, much less the actual skills required to do it properly?

In Sisterhood focuses on feminist activities in Pittsburgh from 1967 to 1989. All of the interviews are oral histories recorded in audio or video format..

The Gran Varones is a storytelling project that elevates the stories of Latinx & Afro-Latinx Gay, Queer, Trans and Bisexual men and bois and is based in Philadelphia. Like #AMPLIFY, they have limited resources to finance their videos and other needs.

My partner, who is now 55, often laments that without a proper LGBTQ-centric newspaper or magazine in the region, we lack even a listing of obituaries or death notices. We are focused on survival. There is not much left for preservation — especially of the voices who aren’t already ‘on the record.’ That is a great tragedy.

We are standing in the shadows of the mass shooting at the LGBTQ Pulse Nightclub in Orlando, Florida, and the more recent shooting at a synagogue in Squirrel Hill, an area dear to the queer community. We lost friends, champions, allies that day. Both ripped into the hearts and souls of Pittsburgh’s LGBTQ community, even if we did not know the victims or the survivors. The experiences remind us of the need to tell our truths and the equally compelling requirement that we listen to the experiences of those around us, both old and young.

I do not mean to exclude the experiences of young LGBTQ folks. They will have a chance to age up into the project. And with PrideFest scheduled to move in 2019 from Liberty Avenue to the area by the Andy Warhol Bridge and Fort Duquesne Boulevard, those memories will be important to document.

We must take stronger action to capture our history in our own words before we are at yet another funeral, wondering about an elusive memory of a project or a fragment of a story left untold. Soon, there might be no one left to ask.

As Jazmine, 46 at the time of this December 2015 entry, put it: “Seems since I moved back to Pittsburgh from living in Los Angeles for the past 10 years, everyone is gone! Dead or moved or disappeared. I often feel like a stranger in a familiar land.”

Sue Kerr is founder of the blog Pittsburgh Lesbian Correspondents and the #AMPLIFY LGBTQ storytelling archive. The AMPLIFY archive and submission form can be found at http://www.pghlesbian.com/amplify. Kerr can be reached at pghlesbian@gmail.com and on Twitter at @pghlesbian24.