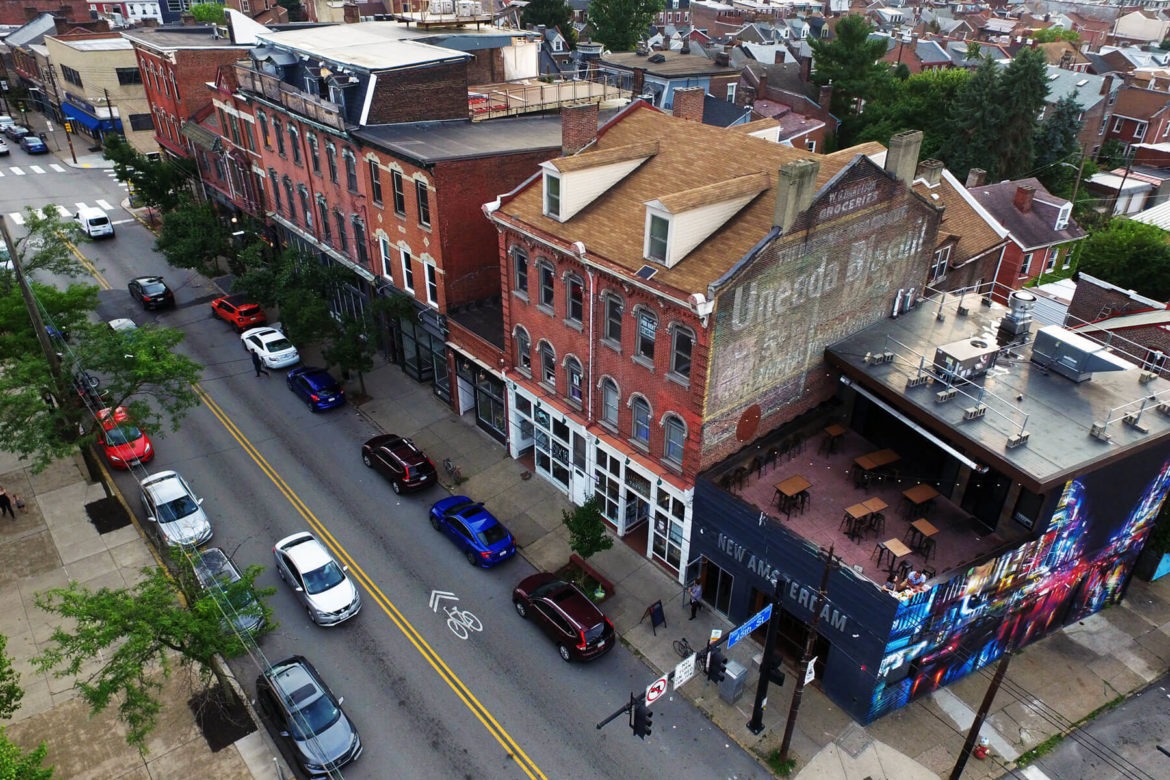 Inclusionary zoning, a policy that requires developers to build a certain amount of affordable units, is gaining momentum in Pittsburgh. A pilot program in Lawrenceville has been made permanent by City Council, and state Rep. Ed Gainey, who will likely be Pittsburgh’s next mayor, says he supports expanding the policy throughout the city.

As housing costs keep rising and construction continues even during the pandemic, advocates say the policy is vital to preventing mass displacement of lower-income people, especially the city’s Black residents, while some developers and residents worry about its effect on the local economy.

A pilot program that began in Lawrenceville in 2019 gave Pittsburgh its first look at inclusionary zoning, after the city’s Affordable Housing Task Force recommended the policy. The Lawrenceville policy required all new developments with 20 units or more to set aside at least 10% of units for lower-income residents at affordable rates.

City Council voted 9-0 to make the Lawrenceville pilot program permanent on June 15. Council heard not only overwhelming support for the policy at a June 2 hearing, but many speakers also called for the policy to be expanded beyond Lawrenceville and with a higher percentage of affordable units. 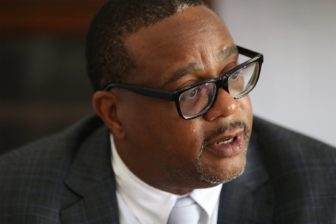 State Rep. Ed Gainey speaks to reporters at the Hamilton House in Homewood on May 21, three days after he won the Democratic nomination for mayor of Pittsburgh. (Photo by Ryan Loew/PublicSource)

“I want to make sure that every housing project that comes before the city, affordability is already embedded into it,” Gainey said in an interview with PublicSource three days after he defeated incumbent Mayor Bill Peduto in the May 18 Democratic primary.

Peduto has said he does not support citywide inclusionary zoning, but does support it in neighborhoods under certain conditions.

A blanket inclusionary zoning policy could be challenging for a city with 90 distinct neighborhoods with different market conditions and needs.

“Inclusionary zoning may make sense in some neighborhoods, and maybe not in other neighborhoods,” said Diamonte Walker, the deputy executive director of the Urban Redevelopment Authority. “It’s not a silver bullet. I do think that it is an arrow within the quiver that we need to take another look at, and we need to figure out how to right-size it and right-structure it, and create the right structure for Pittsburgh.”

The Lawrenceville program required new developments with 20 or more units to reserve 10% of units for households that meet income requirements for below-market-rate housing.

The results are compelling: Including units under construction, the program has created 40 affordable units in the neighborhood, even while a pandemic constrained the local economy during much of the two years since the program began.

“I think we’ve proven the feasibility of the model,” said Dave Breingan, the executive director of Lawrenceville United. “It’s not going to cure all of our housing challenges. But together with other policies it can make a real difference.”

Councilwoman Deb Gross, who represents Lawrenceville and championed the idea two years ago, said the community was “very clear in wanting affordable units” in the neighborhood in the long process of public comment leading up to the pilot program.

“And they were built,” Gross said. “So the sky didn’t fall. Some people worried that it would stop development. It actually did not stop development. And the neighborhood is seeing new units coming online very soon.” 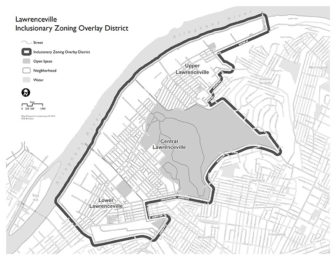 The inclusionary zoning overlay area established as a pilot program in 2019. City Council voted to make it permanent in June 2021. (City of Pittsburgh)

The City Planning Commission recommended that the Lawrenceville policy be made permanent in April. Sabina Deitrick, an associate dean at the University of Pittsburgh and a member of the commission, said in an interview that Pittsburgh has “been really slow” to adopt inclusionary zoning and that she’d like to see it across the city.

Lawrenceville’s ordinance was tailored specifically to that neighborhood after a long process of public consultation. Before inclusionary zoning can be enacted in other neighborhoods, Gross said “nothing would happen without having the opportunity for neighbors in each of those neighborhoods to participate in the conversation.”

Swartz also said inclusionary zoning as it's structured in Lawrenceville would have little overall impact on Garfield because the policy only applies to larger developments.

“We don't have projects being done on that scale,” Swartz said.

“It’s not going to solve our affordability crisis by itself,” said Jennifer Rafanan Kennedy, the acting director of Pittsburgh United. “It’s one of those tools in the toolbox, and it is certainly most helpful in places where market rate development is happening.”

Right next door to Garfield, some Bloomfield residents had wanted the neighborhood to be part of the initial 2019 pilot program, Gross said. She said she has recently received "formal requests" from Bloomfield and Polish Hill to be included in inclusionary zoning.

Gross said that since the market has stayed hot and developers are looking at large parcels in nearby neighborhoods, “it's time to really take seriously [Bloomfield’s] desire to be added into inclusionary zoning.”

Christina Howell, executive director of the Bloomfield Development Corporation, said in the June 2 council hearing that her organization wants to see the policy expanded “as quickly as possible.” She said that were inclusionary zoning rules in place, three housing developments under consideration in Bloomfield would produce 36 affordable units. She pointed to a 128-unit proposal for Melwood Avenue that, under current zoning, has no affordable units planned.

Some developers have a more cautious view of inclusionary zoning. Bill Gatti, CEO of Trek Development, said there would be “real economic headwinds” against any expansion. Trek often develops mixed-income housing under current zoning, including an East Liberty project set for approval this week that would include more than 30 affordable units.

“It could have the unintended consequence of really slowing down development in the city,” Gatti said. “So I think we just have to approach it with a really open mind.”

Andre Del Valle, director of government affairs for the Pennsylvania Apartment Association, spoke against the policy at the June 2 hearing. He described it as a tax on development and suggested that developers may pass the cost of the affordable units onto middle-income renters in other units.

A feasibility report that the city commissioned from the firm Grounded Solutions Network in 2017 indicated that a 10% affordable housing requirement was feasible citywide, with 15% feasible in certain places where the market is stronger. 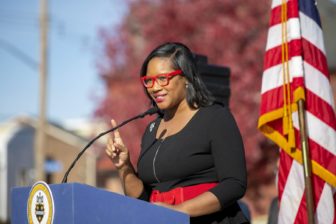 Ed Nusser, the head of the City of Bridges Community Land Trust, gave a pointed response during the council hearing when a speaker voiced concerns about the policy’s effect on property values.

“This housing crisis that we face has been brought on by what many people would also call growth,” Nusser said. “So what is growth to one person can be displacement to hundreds and thousands of our neighbors.”

Gross said that it’s important to enact these policies not just in neighborhoods that have booming development, but to protect neighborhoods before developers move in.

“Even in some of the neighborhoods that didn't feel they had real estate pressure four years ago, I hear from them now that they're starting to hear it now,” Gross said.

A tool for housing justice

Many view affordable housing policy as a key to a more equitable Pittsburgh, particularly for the city’s Black communities.

“As a Black person in this city, I’m just processing why a tool to create mixed-use housing hasn’t been approved yet,” said Amber Thompson, a Lawrenceville resident who spoke at the June 2 hearing. “This region has lost tens of thousands of Black people and we know that this is not sustainable if this city wants to continue to grow.”

Census data shows that the city’s Black population decreased by about 7,000 from 2009 to 2018, a 9% decrease in Black population and a higher rate of decline than the city at large. Housing advocates cite the statistics as a dire call to action to make Pittsburgh more affordable.

“I think the City Council has to sharpen their pencils and get down to the business of creating some legislation to protect Pittsburgh residents,” Milliones said.

Gainey often framed his candidacy around the idea of justice, pointing to disparities in the economy, health care and policing between white and Black residents.

“We can’t push people out and say we’re growing the economy,” Gainey said in a post-election interview. “There’s only a select few that are playing in this economy.”

‘Not a silver bullet’

No organizer or official in Pittsburgh claims that inclusionary zoning will solve the city’s housing problems on its own. Most that PublicSource spoke to said that it’s an important tool among several that the city must invest in.

Gainey’s focus was on inclusionary zoning during his May 21 interview with PublicSource, but his campaign website includes specific calls for added investments in community land trusts and the Pittsburgh Land Bank.

Swartz said he hopes the city will use some of the $335 million it is receiving from the American Rescue Plan to invest in housing-related infrastructure. Milliones called for greater transparency in how the city and the URA make transactions involving property owned by the two entities.

“It means that we're going to need to make structural changes in our city, particularly around inclusionary zoning, around parking requirements, around density, around being able to create accessible dwelling units,” she said. “We have to think in 21st-century terms.”