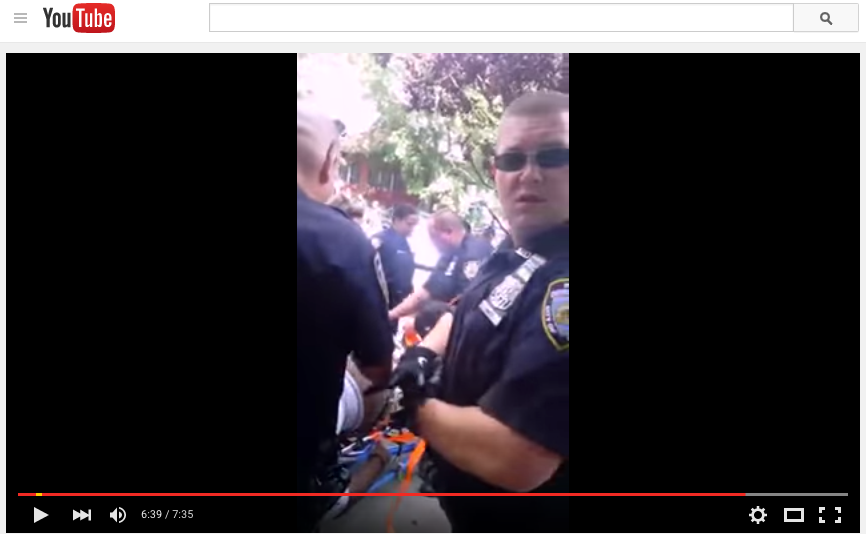 Along with cat videos and Taylor Swift, the video streaming site has become a global library for disturbing footage of police officers beating, choking and shooting citizens – sometimes to death.

What might have been a private clip for investigators, or a brief TV news segment, can now be scrutinized in raw form by literally anyone with an Internet connection over and over again.

As the Washington Post reports, some police fear that exposure. If the public thinks they’ve done wrong, and it’s their face on YouTube, that could be the end of a career.

That’s apparently hurting some officers’ willingness to do their jobs.

New York City Police Commissioner William Bratton called it the “YouTube effect” that has emerged for officers post-Ferguson and, in New York, after the death of Eric Garner last year after he was put in a chokehold by an officer making an arrest.

Bratton told the gathering that he thought the malaise among New York City officers would have worsened if it wasn’t for the execution-style killing of two officers last December.

Garner was not armed and said repeatedly that he couldn’t breathe before eventually being hauled away dead. Citizens filmed the incident, which drew widespread outrage. There was no video of the Michael Brown shooting in Ferguson.

Bratton was speaking Wednesday in a room of police chiefs from across the country, federal law enforcement officials and mayors of cities like Chicago, Washington and New Orleans.

The meeting was apparently meant to be closed to the public, but Washington’s mayor listed it as a public event, and a Post reporter entered with the mayor’s staff.

Officials were broadly discussing why violent crime has surged in many U.S. cities.

Some think officers are policing less aggressively because they fear they’ll lose their jobs.

Chicago Mayor Rahm Emanuel said officers “don’t want to be a news story themselves, they don’t want their career ended early, and it’s having an impact.”

“The question I keep asking my staff is, ‘Do these hypothesis fit the map and the calendar?’” he continued. “Cities with nothing in common are seeing in the same degree and in the same time – dramatic increases in violence, especially homicides — does heroin explain that? I struggle with that … is it guns? Well, what’s changed with guns in the last nine months? Is it the criminal justice system?

While numerous deaths in the the year since Brown’s death in Ferguson have led to increased scrutiny of fatal police incidents, the issue is not new.

In fact, FBI statistics have failed to capture huge numbers of deadly shootings by police over many years, meaning it’s been impossible to even measure the historical scope of the problem.

Smartphones have captured video for years, and commercial video cameras have existed since the early 1980s.YouTube was founded in 2005.

It should be noted that while public scrutiny of police shootings can end careers, criminal charges are extremely rare.

Transparency advocates complain that police are too easily cleared in shooting inquiries that have little, if any, public oversight. Investigations are often internal; even the most confusing and troubling shootings are ruled justified; and discipline can be walked back when the unions step in.

In Pittsburgh, Leon Ford Jr. was shot and paralyzed in a controversial traffic stop in November 2012. Dashboard footage captured the incident, though it leaves many questions unanswered in the chain of events that led to Ford trying to flee the scene and being shot despite having no weapon.

Ford, who now speaks publicly, was tried and acquitted of related felony charges. The district attorney decided not to retry Ford on misdemeanor charges after a jury deadlocked.

One officer is reportedly under federal investigation but none has faced charges, and it is unknown how that officer was disciplined after an internal board said firing in a moving car was against department policy.

Recently, the Post also examined how police withhold body camera footage but give it to officers under investigation.