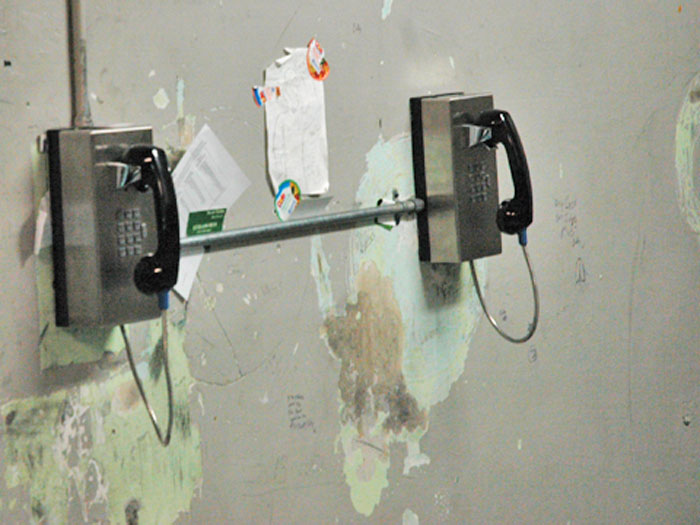 With a captive audience, private companies are charging “sky-high” rates for prison inmates to make telephone calls and transfer money, according to a recent New York Times story.

Inmates and family members complain they are being gouged, the story said, because companies don’t have to follow regulations that protect the general population.

In exchange for business, companies often pay fees to state and local governments, an arrangement that can drive prices even higher.

One Pennsylvania inmate has taken his frustration to court.

In April, Walter Chruby sued Virginia-based Global Tel-Link for charging “unjust and unreasonable” rates for phone calls, the story said. Chruby, who is incarcerated at SCI Laurel Highlands in Somerset, has served 19 years of a life sentence for murder.

Since late 2005, Chruby said he has had no choice but to make phone calls using GTL, which pays commissions to the Pennsylvania Department of Corrections, his federal lawsuit said.

Companies acknowledge that pressure to increase commissions has caused a hike in prices, the story said. One Texas company promised a county $55 per inmate each month, according to a contract reviewed by the Times.

Mr. Chruby’s sentiment was echoed in dozens of lawsuits filed by inmates against Securus, Global Tel-Link and other providers. While the F.C.C. capped interstate telephone rates at 25 cents a minute earlier this year, after agitation from prisoners’ rights advocates, local phone rates can still be steep and other fees vary widely from state to state. For instance, using a phone to transfer $10 into an inmate’s account via JPay to the Southeast Correctional Center in Charleston, Mo., costs $3.95, while a similar transfer to the Illinois Youth Center in Chicago runs $5.95.

Even dropped calls can be costly, burdening inmates and their families, the story said.

The chief executive of Miami-based JPay said the commission system should be modified, adding that lowering commissions might be difficult because many states are hurting financially.

GTL, which serves at least 1.1 million inmates, according to the Times, recently told the Federal Communications Commission that its prices are based on demand from states and cities for more money.

“There is no free lunch,” the company said, according to the Times.

The prison industry is a growth business, the story notes, and Wall Street is bankrolling companies that profit from an audience that is growing and can’t choose alternatives.

Even after incarceration, inmates are hit with fees to access money left over from their time behind bars.

Rather than giving released inmates checks for the money they had when they were incarcerated, as well as any prison earnings, many prisons are putting the money on prepaid debit cards, which often come with high fees.

Not all states are in it for the money.