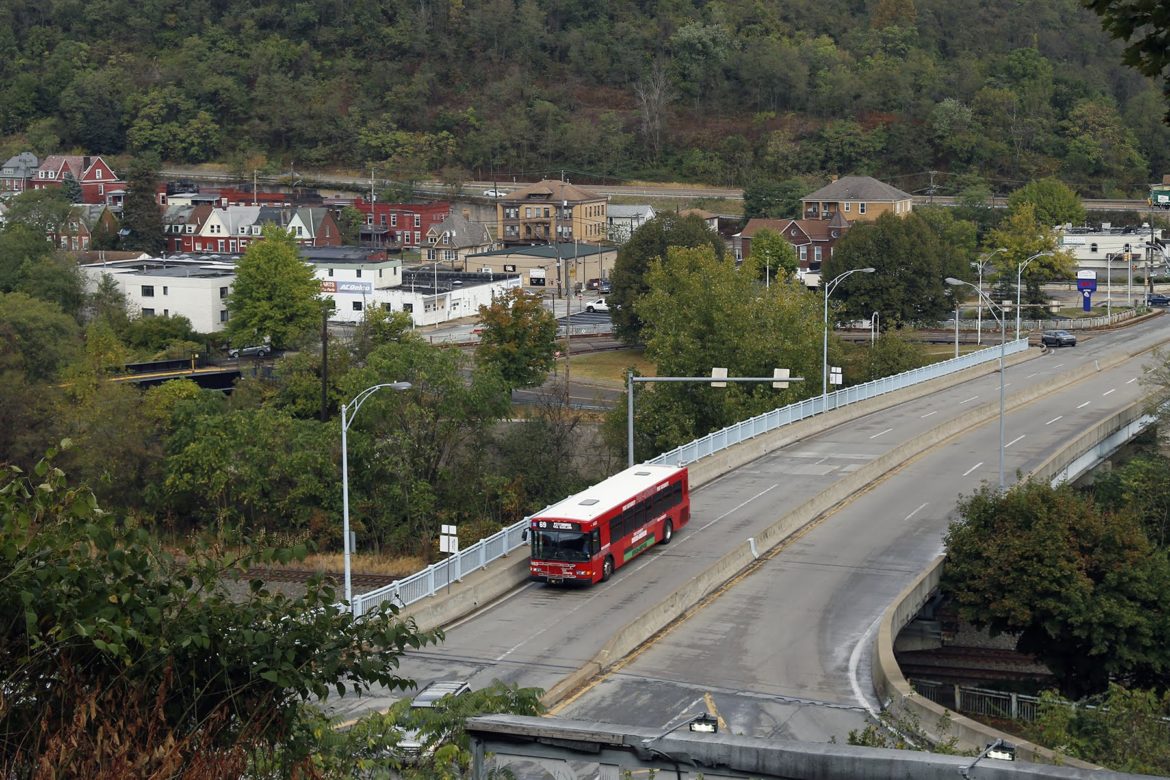 For Constancetein Evans, a recent move to Wilmerding brought both obstacles and benefits.

She’s able to afford her own apartment in the borough southeast of Pittsburgh. She sees that as a better environment for her children than subsidized housing on North Side.

But she’s limited by transit. Getting to a food bank is more difficult. And she relies on a network of bus routes to get to work as a home health caregiver.

“I still struggle,” said Evans, 39. “I don’t live in the city of Pittsburgh. I’m not in Homewood, I’m not in East Liberty, I’m not in Garfield, I’m not in Point Breeze or any of the areas where you can get help.”

Distance is a barrier for her children, too, with fewer activities for them outside the city.

“It would be great if there were areas that have places for kids to do stuff,” said Evans, who’s lived in her current apartment since 2018. 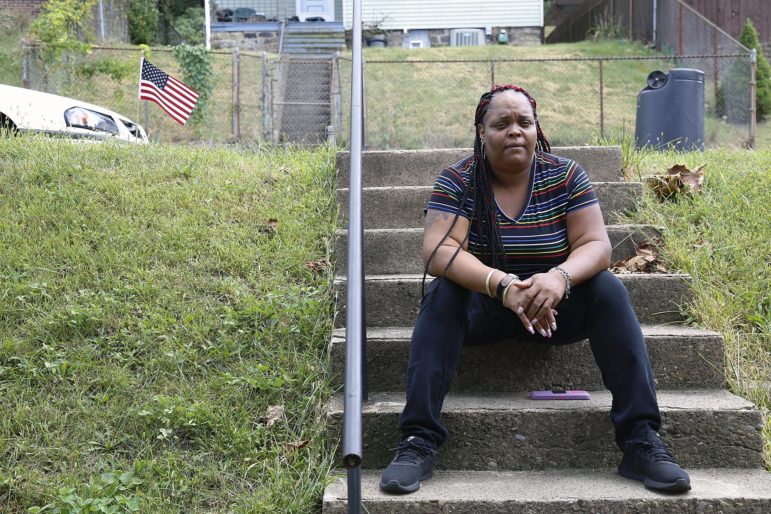 Constancetein Evans lived in subsidized housing in Pittsburgh but left the city to find a better environment for her children. She now lives in Wilmerding, which is affordable but has fewer transit options. (Photo by Ryan Loew/PublicSource)

As Pittsburghers move to the Monongahela River Valley for affordable rents, transit activists describe the need for more robust options to help them stay connected to neighbors and services in their old communities.

Officials from the Port Authority of Allegheny County know that residents like Evans feel cut off from important resources. In their view, the problem is money.

But, citing costs and infrastructure challenges, the Port Authority has no plans to expand service to communities in the Monongahela Valley. Transit advocates, like Laura Wiens of Pittsburghers for Public Transit, acknowledge those challenges, but also question if enough is being done to serve residents who left the city for a more affordable life, only to find hardships in the form of transit barriers.

‘The fight for more’

One fix for an hourlong bus ride would be adding or extending bus lines to provide more options. But this can be costly and cumbersome.

Public transportation works most efficiently in highly populated areas, according to Caldwell. As cities gentrify, he said, residents move from the urban core and start to lose access to the traditional transit systems from their old neighborhoods.

“[I]t’s difficult because people are more dispersed and you don’t have a density to get the effectiveness of transit,” Caldwell said.

Currently, about a dozen bus lines serve portions of the Mon Valley, according to Brandolph. Brandolph said the Port Authority isn’t guiding its decisions based on displacement.

“I would not say that we’re specifically looking at individuals who’ve been displaced from one area to another,” Brandolph said. “We aren’t able to pivot or react that quickly as an agency.”

In evaluating any new access, Brandolph said the Port Authority is mindful that it won't take away from existing service. Also, expanding the areas covered by a current line as opposed to adding a whole new one costs significantly less, so areas already close to an existing line are easier to develop transit. Brandolph said the authority is unable to give an estimation of costs to extend or add a new bus line.

"The cost of adding a new bus route and extending a bus route both depend on a multitude of factors, and without any specifics, it would not be at all productive for me to even to ballpark a guess, so I won’t," Brandolph wrote to PublicSource.

Transit advocates have called for the Port Authority to offer more convenient and affordable access to transit for vulnerable communities..

In June 2018, Pittsburghers for Public Transit [PPT], in conjunction with the Mon Valley Initiative, released a “Riders’ Vision for Public Transit,” which calls for the East Busway to be extended or connected with bus-only lanes to McKeesport and Monroeville, among other suggestions.

The Port Authority is considering adding options for riders in Monroeville, Brandolph said. Though that could mean something like an additional park and ride, not necessarily new or extended lines.

Last June, PPT launched the Beyond the East Busway project, which is surveying transit riders in an attempt to fight for more access. On the project website, the group has included maps that detail the change in routes and speeds over the years. According to these maps, the average commute time from McKeesport to Downtown is about 75 minutes, and it’s about an hour from Monroeville to Downtown. 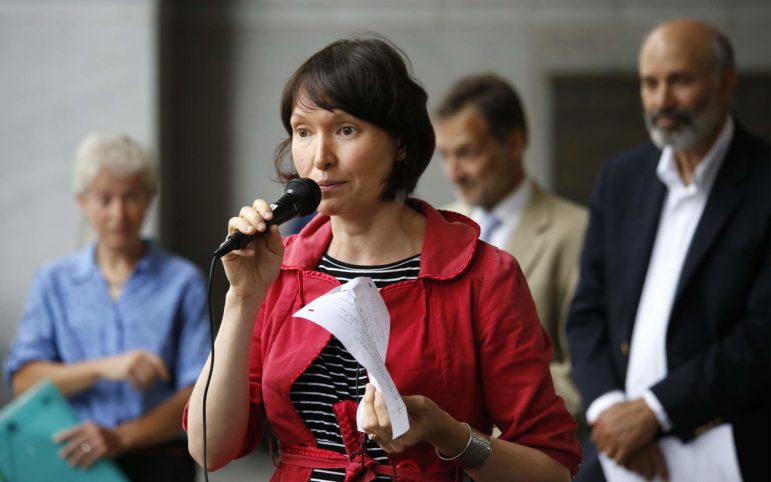 Laura Wiens, director of Pittsburghers for Public Transit, speaks at a June 2018 news conference outside the City-County Building. (Photo by Ryan Loew/PublicSource)

Wiens accepts that it could be too expensive for Port Authority to add routes. But she said the authority can make smaller changes, such as scrapping fees for bus transfers.

During the Port Authority’s 2019 fiscal year, which ran from July 1, 2018, to June 30, 2019, overall government funding totaled about $336.6 million and revenue, which mostly comes from money paid in fares by passengers, totaled about $104.6 million. Since the 2016 fiscal year, government funding for the authority increased about 16.7% while revenue decreased about 2.8%.

The authority has hired a consultant to study fares and plans to release a report by the year’s end, Brandolph said.

Because displacement is largely driven by housing costs, Wiens said she wants the authority to take more initiative in calling for affordable housing near transit. Brandolph said the authority is already working on the issue.

While displacement can fracture communities no matter where residents end up, having access to transit can ease the transition.

Celeste Scott, the affordable housing organizer for Pittsburgh United, previously lived in Lawrenceville, then Beltzhoover before leaving Pittsburgh for Homestead. She’s been there for about three years.

Eight years ago, she was paying about $475 a month for rent in Lawrenceville, she said. She estimates that she’d have to pay close to $1,300 a month now for similar accommodations.

In Homestead, she’s fairly close to transit and to a grocery store, giving her advantages over other displaced residents.

“I don’t think that’s the story of many folks that are taking what they can get,” Scott said. “There’s a lack of housing stock.” 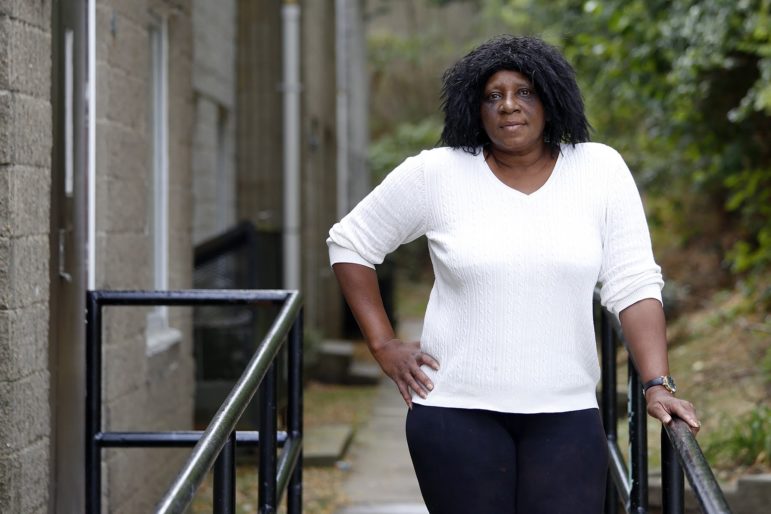 When Debra Green first moved to Duquesne, getting on a bus was difficult. “It was very hard because there were no buses to take me... to anywhere I wanted to go because the closest bus stop to me was down by Kennywood Park,” she said. (Photo by Ryan Loew/PublicSource)

Debra Green, a PPT activist in Duquesne, saw firsthand how displacement can make life difficult and how transit can ease those struggles. Around 2017, she sold her home in the North Side. A car accident forced her to retire from a job at the Rivers Casino’s gift shop, which made keeping up with her housing costs too difficult. Looking for a more affordable area, she moved to Duquesne.

However, getting to the bus proved to be difficult because the Port Authority removed a nearby 59 bus stop. She had to walk to another bus stop about 20 to 30 minutes away. Because of the accident, walking that length was tough. Last year, the Port Authority restored the former 59 bus stop, making it much easier for Green and her neighbors to catch the bus. Now, it takes her just five to 10 minutes to walk there.