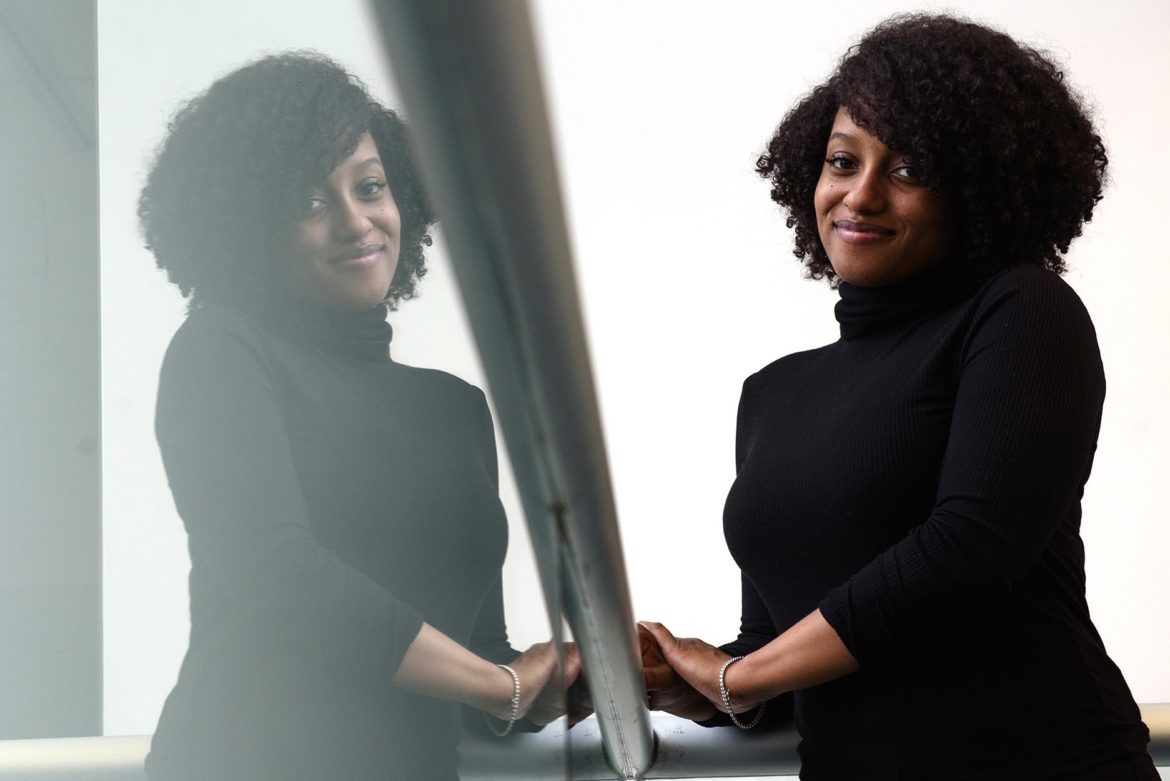 Billie Vaughn, 29, of Allentown, poses for a portrait at the Community College of Allegheny County's campus on Jan. 25, 2018, on the North Side. Vaughn, an advocate for affordable housing, is a single mother who lives in Section 8 housing and wants to dispel the stigma. (Photo by Justin Merriman/PublicSource)

In early 2016, Billie Vaughn got a clerking job in the City of Pittsburgh’s finance department. And when you get a city job — even a part-time one with a salary of $13,400 — you have to live in the city.

That doesn’t pose a major barrier for everyone, but Vaughn soon found that the requirement deeply complicated her search for a home as a Section 8 voucher holder.

She didn’t expect to encounter such difficulty in finding affordable and livable housing. And because vouchers can expire, the clock was ticking.

A single mother with three children, Vaughn wanted a quality home in a safe neighborhood. Yet many of the sites she saw accepting Section 8 vouchers fell far below her expectations. She toured properties with walls made lumpy by water damage, flooring gnawed away by termites and other conditions she called “deplorable.”

“I was educating landlords everywhere.”

Determined to find a suitable living space for her family, Vaughn began looking at properties that didn’t accept Section 8 vouchers. She discovered beautiful homes outside of the city, only to learn the landlords were misinformed or biased against Section 8 recipients.

“So many of these landlords just have horror stories, or they just didn’t know,” recalled Vaughn, referring to the stigma that often surrounds Section 8 tenants — one of laziness, unkempt homes and drug use.

While her job required her to live within city limits, she still took the time to inform each landlord about the program and challenge their preconceptions.

“I was educating landlords everywhere,” she said.

After months of searching, she finally found a property in Allentown with a landlord who accepted her Section 8 voucher. It was a close call.

“You have 120 days to find something,” she said. After being granted two extensions, and having one deal fall through, she found a home on day 161.

Vaughn, 29, has experienced the struggle of finding affordable housing in Pittsburgh since she was young. That strife is what is motivating her to transform Pittsburgh’s housing scene.

Originally from the East End, Vaughn remembers moving frequently with her mother and two brothers, switching between neighborhoods and schools.

“Now I see how that’s one of the struggles of a single mom. You know, renting, just moving around, with not a lot of stability,” she said. 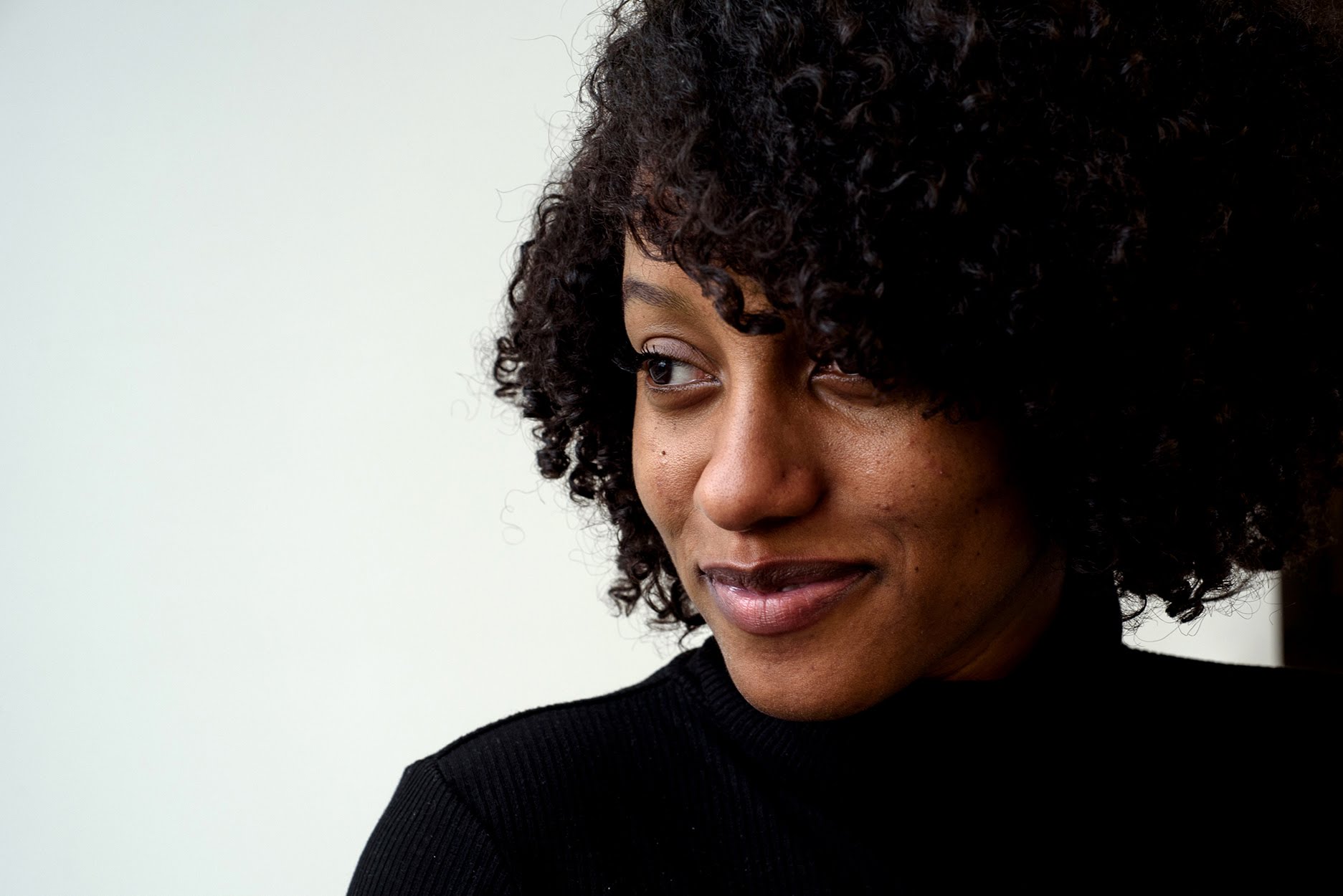 Billie Vaughn, 29, of Allentown, is attending the Community College of Allegheny County [CCAC]. She expects to graduate from CCAC by December and then attend the University of Pittsburgh for a bachelor’s degree in political science. (Photo by Justin Merriman/PublicSource)

Years later, while living in an apartment on Penn Avenue in East Liberty, Vaughn was again faced with the lack of stable affordable housing. As the neighborhood began to change, developers started coming into her home regularly to discuss renovations, often with her children present. She moved out in 2009, after her landlord told her he was raising the rent.

“It was the hardest thing ever,” she said.

Now, she is dedicated to equipping others with the knowledge and resources they need to find — and secure — affordable housing. This commitment is rapidly shaping her career, her personal life and her aspirations. From pursuing a college degree to starting her own business and running for local office, she is determined to serve others and to be a voice for Section 8 recipients.

The U.S. Department of Housing and Urban Development [HUD] administers the Housing Choice Voucher Program. Also known as Section 8, it is the federal government’s major program for providing private-market housing assistance to those unable to afford it. Its main recipients are low-income families, the elderly and people with disabilities. Landlords are not required to accept Section 8 vouchers and, as Vaughn discovered, many don’t.

Inspired by her own home search, Vaughn left her job at the city in September 2017 and established Common Unity PGH LLC. The business, a landlord liaison service for Section 8 and low-income tenants, is meant to address the stigma of Section 8 and bridge the gap between tenants and landlords. Vaughn hopes to to educate landlords about Section 8, empower tenants to secure suitable housing and assist low-income residents with homeownership.

Before getting her own voucher, Vaughn said she didn’t realize the struggle Section 8 voucher holders face in finding a home. “I just thought, ‘Oh, they’re not looking good enough,’” she said.

Now, after speaking to landlords firsthand, she believes there is a prejudice — often against young, single mothers like herself — that keeps many landlords from renting to Section 8 recipients.

Marketing herself was key to changing landlords’ perceptions of Section 8. “If I had to pull my hair back and wear a suit, I did it,” she said. 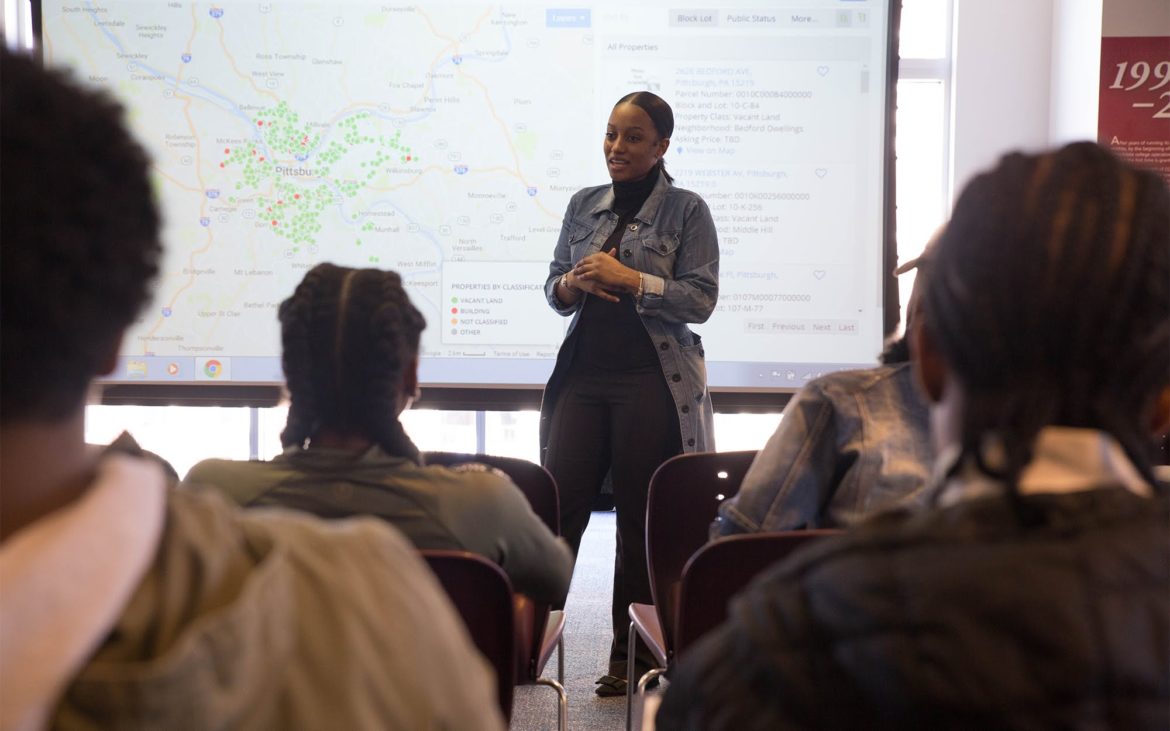 Billie Vaughn presents to the Black Student Union at the Community College of Allegheny County on March 12, 2018. Vaughn developed a workshop on how to purchase vacant land and tax delinquent properties from the city. (Photo by Njaimeh Njie)

By giving a face to Section 8, she was overwhelmed by how open landlords became to the program.

“That helped me learn that it is possible for there to be more Section 8 rentals, for us to stay inside the city,” reasoned Vaughn. “It’s possible. You just have to break the stigma.”

Vaughn’s vision for Common Unity PGH is a one-stop shop for resources, from assistance in job searches to applying for the Low-Income Home Energy Assistance Program [LIHEAP]. She is working to secure an office in the Allentown neighborhood, which she aims to have open by the summer. Once established, the office would be the home base for her homeownership workshops.

One workshop, called “Etiquette for Success,” is scheduled for 5 to 7:30 p.m. April 19 at the Department of Human Services, located at 1 Smithfield St in Downtown. Open to all Section 8 and low-income housing tenants, it is designed to prepare participants to successfully secure Section 8 housing as well as support their long-term homeownership goals. To promote the event, Vaughn has been using social media and posting flyers at daycares, welfare centers and libraries.

“There’s so much information that’s being withheld from people of low-income communities,” she said.

Others agree the focus on empowering tenants is long overdue.

“We’re having conversations around vouchers and really we should have conversations around families that happen to have vouchers,” said Diamonte Walker, the Minority & Women-Owned Business Enterprise (MWBE) program officer at the city’s Urban Redevelopment Authority. Walker began assisting Vaughn with the development of Common Unity PGH several months ago and has since become her mentor. “And that’s why I think Billie putting that human face on it and taking it away from being just sort of this transactional thing, I think that’s what we need.”

“There’s so much information that’s being withheld from people of low-income communities.”

Vaughn plans on recruiting landlords to provide Section 8 housing. Participating landlords will be given access to a tenant database, which will connect landlords with tenants who have completed her program.

“I think what she’s doing is great and deeply needed,” said Joshua Pollard, CEO of the real estate investment and advisory firm Omicelo, which recently purchased the Bethesda-Homewood units, a cluster of low-income housing that lost its federal subsidy. Pollard is also board chairman of the nonprofit organization Omicelo Cares. Vaughn was part of the first cohort of Omicelo Cares’ Real Estate Co-Powerment Series, a workshop series to educate community members and organizations about the real estate and community revitalization process. “I’m in a wide range of conversations with significant public agencies that desire to build things exactly like what Billie is doing already.”

Joe Calloway, founder and CEO of Pittsburgh-based real estate development company RE360, is Vaughn’s landlord. He said one problem working against Section 8 tenants is the process to implement a voucher.  There is often a gap in time between when a Section 8 tenant and landlord come to an agreement and when the Housing Authority can inspect the unit and process the necessary paperwork for the lease to begin, often resulting  in a loss to landlords. Calloway sees potential for Vaughn’s services to make the process more efficient. “If she can expedite the process, make it smoother, make it cleaner, from a financial standpoint, it’s a win-win.”

Walker agrees. Vaughn’s work could bring “two completely disparate power structures” closer together. If she succeeds, Walker said she thinks, “It could put a huge dent in our affordable housing deficit.”

Vaughn has set herself up for a busy 2018. “My goals for this year: I will have my real estate license, my notary license and my associate’s degree in business. And that’s why I’m going here,” she said, sitting in the cafeteria of the Community College of Allegheny County’s (CCAC) North Side campus after a full day of classes.

She expects to graduate from CCAC by December and then attend the University of Pittsburgh for a bachelor’s degree in political science.

“I need to gain the knowledge that I need to lead my generation. I’m going to school for them,” she said. 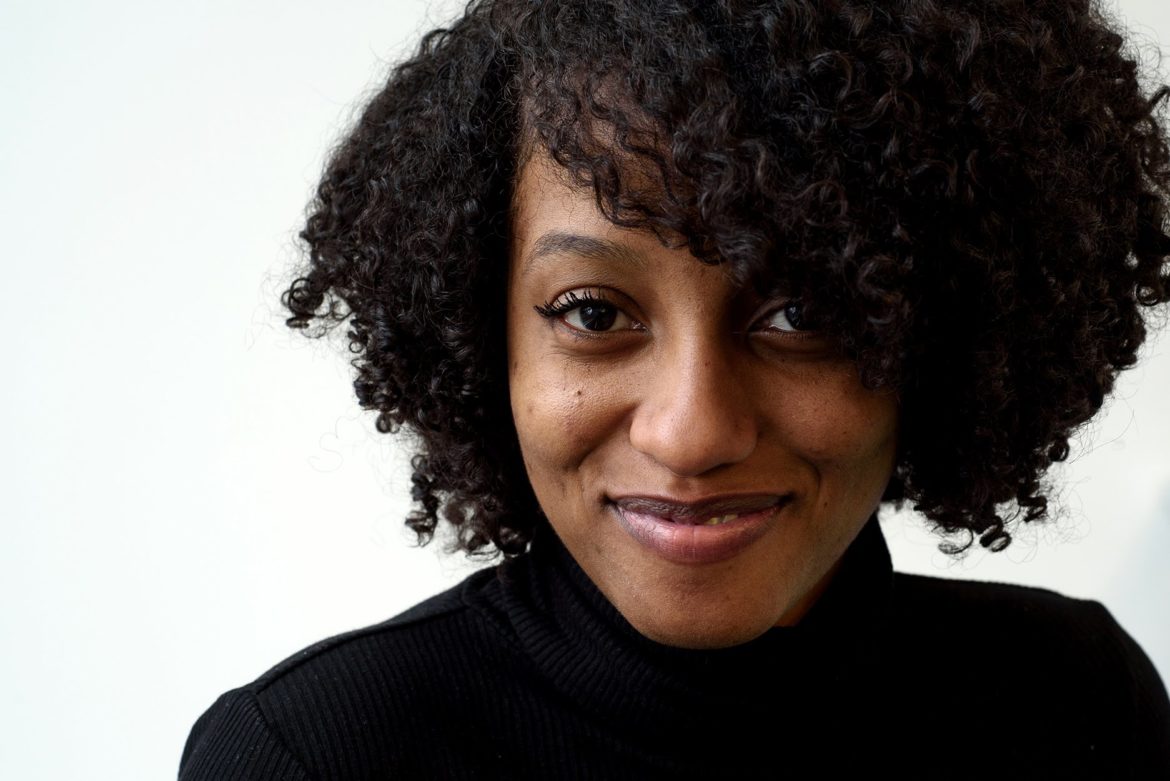 Billie Vaughn said when searching for a home with a Section 8 voucher that she found herself educating landlords about the housing program and showing them that the stereotype of Section 8 recipients is inaccurate. (Photo by Justin Merriman/PublicSource)

In March, Vaughn announced her decision to run for the 18th Ward seat of the Allegheny County Democratic Committee. One of her main platform issues is, of course, affordable housing. She hopes to be a voice at the table for low-income residents.

“There’s a level of people, especially low-income communities, who don’t have any representation,” she said. “There’s too many people that have not walked in the same shoes as the people of the low-income community where they’re speaking for them, and it’s like, you can’t.”

Becoming a Democratic Committee member would be the first step in her political aspirations.

“When I come out of school, I want to run” for Pittsburgh City Council.

Juliette Rihl is a freelance writer and Coro Fellow. She can be reached at JulietteRihl@gmail.com.

This story was fact-checked by Jordana Rosenfeld.