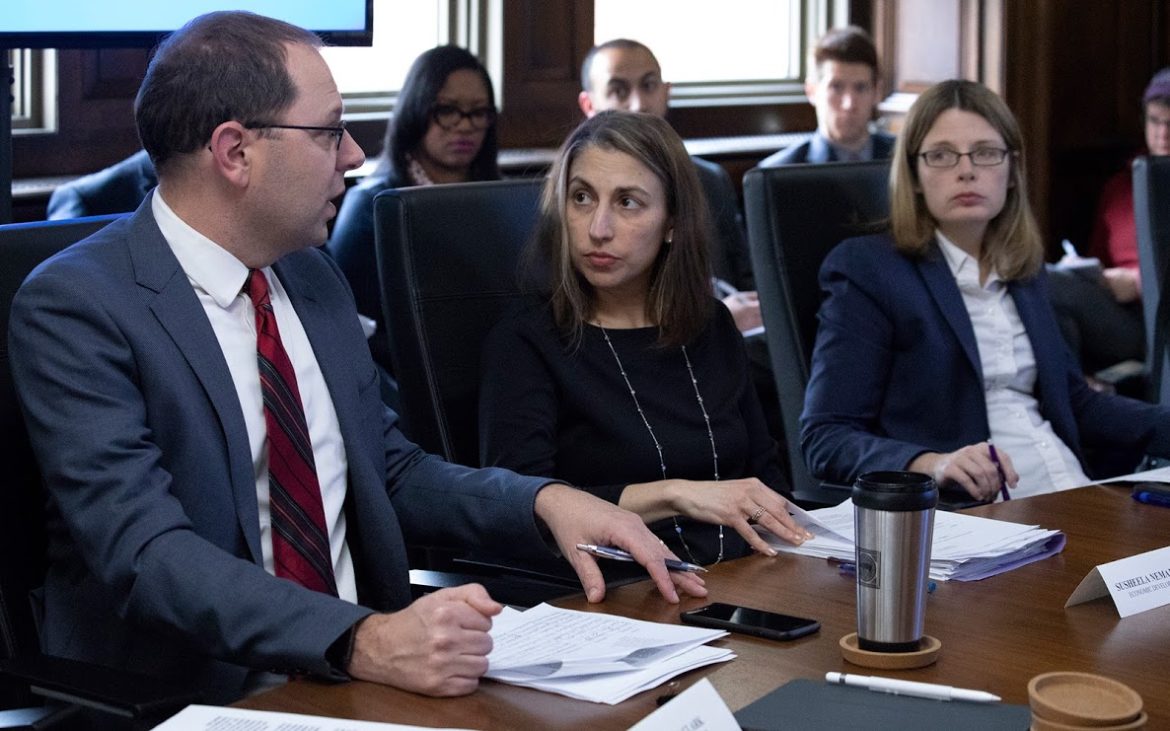 Jessica Smith Perry (right) is the director of the Housing Opportunity Fund for the Urban Redevelopment Authority [URA]. She and Susheela Nemani-Stanger (center), the URA's director of economic development, listen to URA Real Estate Director Nathan Clark speak at the authority's Thursday board meeting. (Photo by Kat Procyk/PublicSource)

The Urban Redevelopment Authority board voted Thursday to disburse $1 million in loans from the Housing Opportunity Fund for two rehabilitation projects. The action comes a year after Pittsburgh City Council voted to allocate $10 million for the fund and one day after council began reversing a plan to steeply cut city funding for the authority.

Thursday’s allocations are the first major payouts for the Rental Gap Program, a component of the Housing Opportunity Fund [HOF], which is managed by the Urban Redevelopment Authority [URA] and pulls in money from real estate taxes. The Rental Gap Program offers funding to developers to build or rehabilitate affordable housing units.

Of the $1 million, $600,000 will be used to create 77 single-occupancy apartments by rehabilitating the Centre Avenue Branch YMCA in the Hill District. The URA board also voted to disburse $400,000 to upgrade twin high-rise buildings serving seniors in the south end of Squirrel Hill, near the Homestead Grays Bridge. The URA also assumed existing debt and allocated funds for the high-rises from another program.

Action Housing Inc., a developer specializing in tax credit-funded affordable housing, plans to upgrade air conditioning and elevators at the YMCA building, which is almost 100 years old. The plan includes bathrooms in every unit as opposed to dorm-style communal bathrooms in the current setup. The building serves single men, with rooms renting at $380 a month.

Action Housing will try to serve the same population after renovations and allow that branch of the YMCA to continue its services on-site, HOF Director Jessica Smith Perry said at Thursday’s meeting.

“Every now and once in a while, you get a project that is so near and dear to your heart,” Action Housing Property Manager Linda Fine told the URA board. “This is one of those projects, given the history of this and the people being served.”

Fine said they did not want to decrease the number of units in the building.

Action Housing has also secured funds for the project from other sources, such as historic tax credits, their own equity and loans from banks.

The second project is the Riverview Apartments, a set of two buildings completed in 1965 and 1971, respectively. They’re owned and managed by the nonprofit Riverview Apts. Inc. Both buildings house elderly residents, with an average age of 85, according to URA Housing Director Thomas Cummings.

The buildings have libraries, chapels, fitness centers and hair salons.

The Riverview Towers already had $465,000 in debt to the URA, which the URA board voted to assume. Under the HOF, the complex is establishing a more comprehensive financial plan. The property received another $650,000 from a different URA program to upgrade apartments. In all, the project received just more than $1 million in new funding from the URA Thursday.

Cummings said the property has raised “a lot of money through the state here and there to do little things...but they’ve never really had a comprehensive redo of the buildings, which they require.”

Currently, the towers have 221 units. The renovations will reduce the capacity by 30 units, Cummings said. Some apartments will be consolidated to better comply with disability needs.

The Rental Gap Program is the first of several HOF-funded programs. Recipients of funds from other HOF programs will be announced in the next few months, the URA board announced.

In January, the URA will begin accepting applicants for its program to develop city properties sold to pay off the taxes on them.

Applications for the Down Payment and Closing Cost Assistance program will be released to consumers this month. The URA will also start taking proposals from nonprofits and other groups to administer the Housing Stabilization Program, which will help those at risk of losing their current housing; consumers will be able to apply in March.

A proposed city budget from Mayor Bill Peduto recommended cutting the city’s contribution to the URA’s budget by $5.3 million, largely in funds expected to go to housing programs. The URA received $8.4 million from the city in 2018, which would have been reduced to $3.1 million for 2019 under the mayor’s proposed budget.

Community activists and URA officials were concerned that the cuts would sharply reduce money for affordable housing, though council yesterday began the process of restoring some of the URA’s funding. If the amendment is passed on Tuesday, URA funding may rise to $5.6 million in 2019. Peduto spokesman Tim McNulty said earlier this week that Peduto’s office expected council to restore some of the authority’s funding.

Peduto supports the funding allocations made today by the URA board, according to a Tuesday press release.

Nick Keppler is a Pittsburgh-based freelance writer who has written for AlterNet, The Village Voice, Mental Floss, The Financial Times, Reuters, Slate, The Daily Beast and Vice.