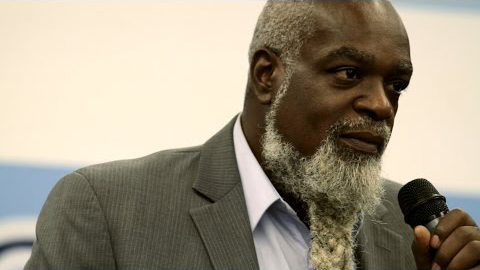 Broken families, confusion, pain, a thirst for retaliation. This is the aftermath of murder. It’s also after violence that some of those most deeply affected dedicate their lives to helping others heal.

After examining the repeating tragedy of neighborhood violence and unsolved homicides earlier this year, PublicSource brought together voices from that series, as well as activists and musicians to share their perspectives on violence and healing, as well as tensions with police, media portrayals of crime and the Black Lives Matter movement.

“If you have the power to tell the story, then you get to tell the narrative,” host Jason Rivers told the crowd in Homewood yesterday. “Oftentimes, some of the most needed perspectives are left out of those stories.” Paradise Gray, co-founder of 1Hood, a founding member of the hip-hop group X-Clan and a long-time social activist, spoke about historic and ongoing tensions between police and the black community. (Photo by Natasha Khan / PublicSource)

Rivers lost his brother to gun violence in 2008 and founded the AR3 Basketball League in his honor in East Liberty. It brings young men together as a way to heal and build community, only blocks from where his brother was killed.

“We hear that breaking news story, that quick clip, but afterwards, it doesn’t really tell you what happens to the people that are left to navigate those spaces,” Rivers said.

In our series, PublicSource found that Pittsburgh police failed to solve roughly half of the city’s homicides since 2010. Of those unsolved cases, 97 percent had a black victim. Many of those deaths occurred only blocks from the event space at the Bible Center Church.

Wynona Hawkins-Harper lost her son Jamar Hawkins in Penn Hills after he was shot to death in November 2013. Her nephew Donté Hawkins was killed in Larimer in May 2012.

She founded JAMAR Place of Peace as an outreach organization to reduce violence and to help others who have lost loved ones. She said criticism of police in the black community is getting attention while she doesn’t see enough being done to reduce gun violence.

"I'm going to work toward the solution,” she said Sunday at the event. “We are watching our people get slaughtered on these streets."

Idasa Tariq, a musician from the collective 1Hood Media, said breaking his glasses gave him inspiration for his new project, FRAMES, and the power of changing perspectives on problems.

He stressed the need to reevaluate how the world looks, to understand the context and to have compassion, especially when dealing with young people who feel like their voices aren’t heard.

“We’re looking for accountability from the youth for the violence and the things that are happening,” Tariq said, “but the parents drop the ball sometimes, the brothers, the sisters, the uncles, the friends.”

Paradise Gray is co-founder of 1Hood, a founding member of the hip-hop group X-Clan and a long-time social activist who spoke out on historic and ongoing tensions between police and the black community and negative portrayals by media.

Gray bluntly tied the history of policing to slave patrols and notes that, in modern times, police who kill unarmed residents do so with the full weight of the government behind them, and without accountability.

“Black Lives Matter is a cry into the universe that that shouldn't happen to anybody's son," said Gray, explaining his anger and why there’s no reason to be polite when asking not to be killed.

Jason Lando, commander of Zone 5 for the Pittsburgh Bureau of Police, explained efforts officers are making to rebuild relationships with the community in Homewood.

PublicSource examined some of these outreach efforts, ongoing tensions and how the city’s anti-violence strategy previously stalled amid a spike in unsolved homicides.

Lando said he wants his officers to have positive interactions with the community and underscored the progress they’ve had by meeting with youth in small groups.

“When we see these kids out in the street,” Lando said, “instead of giving us the evil stare that we sometimes get, they come up to us and they’ll high-five the officers as they’re driving by.”

Ernest Bey often patrols the area as a member of the Greater Pittsburgh Area MAD DADS.

The citizens group was founded by black men and fathers to interrupt violence and to reach out to young people who might fall into a life of drugs or crime. The streets talk, he said, but understanding problematic situations and defusing them requires being physically present.

Jazz pianist Howard Alexander closed with a performance inspired by the storytellers.

As a longtime instructor at the Afro-American Music Institute in Homewood, he explained that the same finger that can pull a trigger can play music instead.