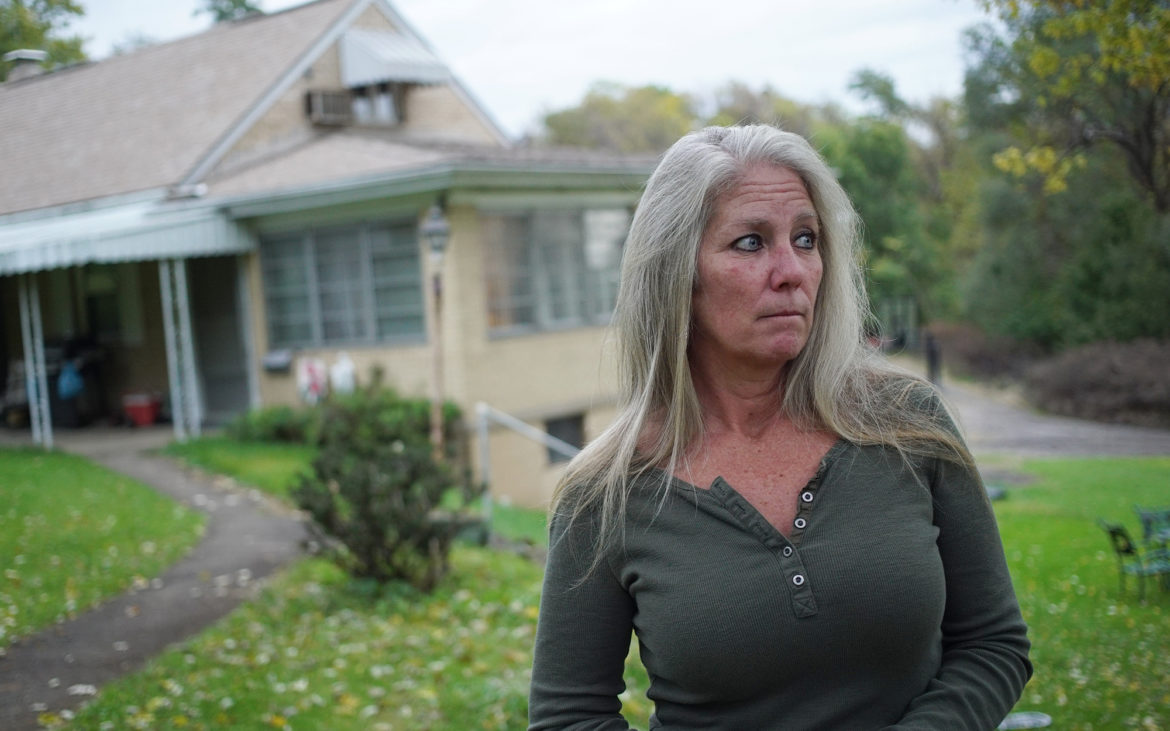 Margo Sheehan lives at the end of Agnew Road in Baldwin, at the edge of the Hays Woods property. Sheehan had been thinking about purchasing the home she rents, but is reconsidering after learning about a planned housing development. (Photo by Ryan Loew/PublicSource)

Hays Woods is 660 acres of forested ridges and valleys that jigsaw along the south bank of the Monongahela River between South Side and Homestead, and home to the city’s only pair of nesting bald eagles.

It is the largest undeveloped chunk of land in Pittsburgh today.

How this land is developed will resound for generations. The decision comes at a time when Pittsburgh has emerged as a voice of conscience in environmental matters, especially global warming. Green spaces, like Hays Woods, reduce urban heat and offset greenhouse gas emissions, and the city has committed to increasing its tree cover by 50 percent as part of its climate action plan.

It was on June 7, 2016, that Mayor Bill Peduto announced the purchase of the Hays Woods property for $5 million.

“Gift of 660 acres by Pittsburgh Development Group II to create largest park in the City,” the press release read.

Now, a year and five months later, plans for Hays Woods are beginning to emerge.

Documents filed with a state agency reveal that the city plans to develop about 75 acres of the land as housing and another 8 acres as two new access roads from Becks Run and Agnew roads.

Questions remain over the scope of any future housing development and its ecological impact. Several community leaders and nearby residents PublicSource spoke with were surprised by the emerging plans.

“That is a huge conversation that I am sure the residents would love to have, because that is not what was promised or spoke of to them,” said Pittsburgh City Councilman Corey O'Connor.

The few details out there are coming from neighboring Baldwin.

Baldwin Borough Manager John Barrett said the URA has met with borough officials twice to discuss the city’s land acquisition, and he was aware the city had plans to develop a portion of the land for housing, but not which portion specifically.

Barrett wrote in an email to PublicSource that the URA, in meetings with Baldwin Borough officials, pitched a concept “of higher end homes, [single] family homes and that they would only build on a portion of the property in a low-density fashion.”

The area is zoned for the Baldwin School District, Barrett said, meaning any potential future resident would pay Baldwin school taxes and send their kids to Baldwin schools but otherwise reside in the city and pay Pittsburgh taxes.

With this chunk of land allocated to housing, Hays Woods would become a 563-acre park, still a significant acquisition for the city and its residents. But Frick Park, at 644 acres, will retain its title of Pittsburgh’s largest park. A path leads through a section of Hays Woods. (Photo by Ryan Loew/PublicSource)

The rocky hillsides and valleys of Hays Woods shelter pockets of wetlands and groves of mature trees that support migratory bird populations. It also bears remnants of Pittsburgh's industrial past: Nearly all of the site was under-mined for coal, and abandoned mine drainage and subsidence remain a problem.

The city purchased the land from Charles Betters, a developer who intended to strip mine the land for coal and install a development, Palisades Park, complete with a racetrack, retail and residential housing. The project never got off the ground because the state denied Betters gambling and mining licenses.

The 2016 press release announcing the city’s land acquisition included a mention that the URA would work with stakeholders “to study the feasibility of a future housing development on a small portion of the site in an appropriate part of the land.”

“From the very beginning, the intent of the URA and the mayor was to acquire this parcel largely to preserve a city park, to prevent the mining and drilling of gas and coal and other minerals that might be there, and housing was always on the table,” said Kevin Acklin, URA chairman and chief of staff to Mayor Bill Peduto.

In seeking to recoup some of the $5 million it spent on the parkland, the city showed for the first time what land they are considering for the housing development. A map included in documents filed to the state Department of Conservation of Natural Resources [DCNR] outlines a 74.7-acre plot in the northwest portion of Hays Woods. The city is applying to the DCNR for $1.2 million in support for the park. Buildings in downtown Pittsburgh can be seen from Hays Woods. (Photo by Ryan Loew/PublicSource)

The proposed housing development starts behind a Baldwin charter school and housing and stretches out to two distinct outcroppings that offer views of the Cathedral of Learning to the north and downriver toward Homestead and Swissvale.

Hazelwood is straight ahead, across the Monongahela River, with rowhouses adjacent to the Uber test track and the Hazelwood Green development site (formerly Almono). The eagles live on the opposite end of Hays Woods, near Streets Run.

“It’s amazing,” Acklin said about the parkland. “When you're up there, it doesn't feel like you're in the middle of the city.”

‘Hays Woods as God made it’

Margo Sheehan lives at the end of Agnew Road in Baldwin. The property she rents borders the city of Pittsburgh, and the map submitted to the DCNR shows plans for an access road to go directly behind her home and her neighbors' to the new housing development.

Neither she nor four other neighbors who had gathered in her living room were aware of the URA’s plan to develop housing behind their property. Agnew Road residents Dan Lukac (left) and Tom Eisel (right) chat with neighbors on a recent evening while Eisel's dog Jynx walks past. “There’s not a whole lot of information, so we phone-tree it, basically,” Lukac said. “Somebody who knows somebody who knows somebody. That’s how we get all our info because there’s been nothing public.” (Photo by Ryan Loew/PublicSource)

Sheehan had planned to purchase the house from her landlord, but upon hearing about the city’s plans she said she may reconsider.

"That’s going bring a lot of traffic back here," she says. "I like my quiet little spot."

O'Connor, who represents Pittsburgh Council District 5, which includes Hays, said that last he had heard, the entire property was supposed to become the largest park in the city.

“To my knowledge, myself and my staff have not seen any proposal for housing,” he said.

Ryan Herbinko, president of the 31st Ward Community Action Group, the main community group for the area, was also caught off guard by the URA’s proposal, writing in an email, “Any development, especially of this nature, should have community input.”

Which portion of the land the city chose to develop matters because of the park’s habitat. Acklin said the URA chose the parcel based on geotechnical studies. Chester Engineers delivered to the URA an environmental site assessment of the property in June 2016, Acklin said.

After the acquisition, Pittsburgh’s Colcom Foundation provided a grant to the Allegheny Land Trust to have the Western Pennsylvania Conservancy (WPC) conduct an ecological and conservation assessment of Hays Woods.

But, according to dates on documents prepared by or submitted to the city, and conversations with officials at the Allegheny Land Trust and WPC, city officials chose the parcel of land for housing before the results of the assessment were presented.

Based on the WPC’s conservation assessment, the 75-acre housing parcel borders and may include land in the Falls Run watershed that is among “the highest quality, most intact, example of native forest on the property.” The proposed access road from Becks Run Road may travel directly through a strand of mixed forest marked a “Particular Habitat of Conservation Interest.”

The study’s author, Charles Bier, said he was unaware of the proposed housing when he conducted the assessment and could not determine how or if a development would impact Falls Run, the waterfall it feeds, or other ecologically sensitive areas in and around the area. A peace sign is painted on a tree in Hays Woods. (Photo by Ryan Loew/PublicSource)

Acklin said the URA will likely move forward with the proposal formally in November or December. The next URA board meeting is tomorrow, Nov. 9.

“We look forward to issuing an RFP over the coming months to evaluate potential construction of appropriate housing on a limited footprint, so as to maximize our primary goal to preserve for generations the largest passive park in the city's history while expanding complementary housing opportunities for our residents,” Acklin wrote in an email.

A passive park, he clarified, is unlike Frick, which has baseball fields and other activity areas. He wrote: “We largely intend to leave Hays Woods as God made it.”

Acklin stressed that the proposal is subject to a vote by the URA and wrote in an email that “all future decisions will be subject to full public input.”

Should the URA be awarded and accept a grant from the DCNR, the 563-acre parcel proposed to the agency would become parkland by deed, according to Roy Kraynyk, vice president of land protection and capital projects at the Allegheny Land Trust. This means the 563 acres could not be developed; the only land the URA could legally develop is the land they already set aside for housing and access roads.

3 thoughts on “Hays Woods would have been the biggest park in Pittsburgh. Then 75 acres were set aside for housing.”