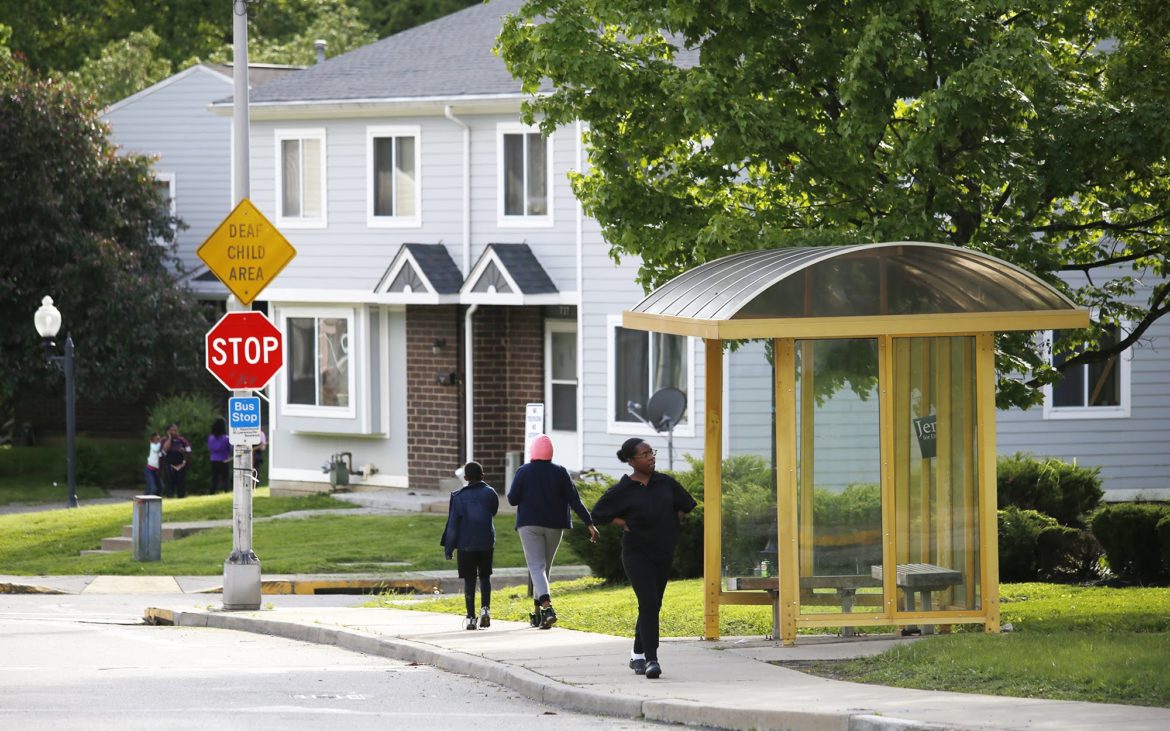 People walk along Johnston Avenue in Glen Hazel, near townhomes owned by an affiliate of the Housing Authority of the City of Pittsburgh. (Photo by Ryan Loew/PublicSource)

“We’re committed to conversation and truly believe in the two-way communication process,” said Caster Binion, executive director of the Housing Authority of the City of Pittsburgh [HACP].

HACP has acted by establishing a hotline, working with a new resident committee and putting a HACP employee on site for one day each week to meet with residents. A private contractor managing the property has also made a change in personnel to respond to concerns.

“Things are going a little bit better,” said Terri Ward, tenant council treasurer of the Bernie Crawley high-rise. She said she has not heard any recent complaints.

Some residents note improvements since PublicSource reported about the situation in early April. But despite the authority’s efforts to better handle complaints and make its staff accessible, some residents remain exasperated, describing new private staff as ill-prepared and dismissive of their concerns.

Felicia Thomas, 32, said management has been slow to act and vague about policies when she’s contacted them about issues like a sewage backup outside her home or concern that her possessions had been rifled through in her townhome.

The frustration lingers some two months after residents told PublicSource that they felt left in the dark by contractors managing the properties and overseeing building renovations.

In November, HACP transferred ownership of the properties to a new private entity called Glen Hazel RAD LLC, created by housing officials. Another HACP-affiliated organization, Allies & Ross Management and Development Corporation [ARMDC], is in charge of operations under the new arrangement and hired a private company called Arco Management for day-to-day management.

The November ownership change is HACP’s first use of a federal program called Rental Assistance Demonstration. Also known as a RAD conversion, the program enables a new, private owner to access funding like loans or tax credits that wouldn’t be available to a public housing authority. The Glen Hazel property includes a 127-unit townhouse development and the 97-unit Bernice Crawley high-rise, which mostly houses seniors.

Residents this winter reported receiving scattered and contradictory information from contractors regarding when and how they would have to relocate to make way for renovations. The more recent complaints of a staff member unable to answer questions and resolve resident issues echo those made earlier in the year.

Leaders from HACP and Arco committed to a stronger notification system for moving plans at an April 10 meeting at a community center in Glen Hazel. HACP, along with Arco officials, said residents would from then on receive a 30-day advance written notice of when they would need to temporarily vacate their units for renovations — a requirement of federal housing policy.

HACP officials have also taken a number of steps to increase their customer service support and communication channels with residents.

The hotline provides a way for Glen Hazel residents to call HACP staff if they’re experiencing issues with employees of Arco. However, Binion said no one has called the hotline.

In addition to the HACP employee’s weekly ‘office hours’ at the Glen Hazel complex, the authority also helped to create a new resident committee that meets with them once a month to share concerns. The authority has also arranged small group meetings with residents to go over moving logistics in the lead-up to their relocation date.

An Arco employee who had previously worked for HACP before the RAD conversion is no longer on the job, said Cliff Asher, executive vice president of the Arco affiliate MMS Group. Residents had complained of the individual’s performance.

In March, Binion acknowledged missteps in the transition and asked PublicSource to check back on the situation in a month.

“I think our lines of communication have improved significantly,” said Binion, who also serves as president of HACP’s nonprofit affiliate, ARMDC. HACP no longer owns the property itself, but ARMDC is helmed by Binion and operated by HACP employees.

Danielle Williamson, who lives in a townhome, said the added support from HACP staff has done little to help settle unresolved complaints or questions for Arco's staff in Glen Hazel. She said HACP inevitably directs her back to the new private management.

“It’s like you’re going in a big circle,” she said.

HACP officials in May said they’ve heard no complaints from residents since setting up new lines of communication. 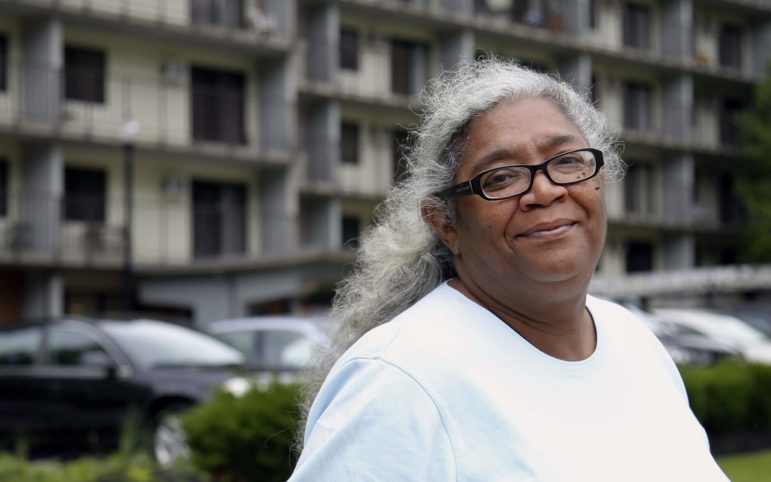 Asher said his staff at Glen Hazel has kept him abreast of issues with residents and that the ongoing issues come from a select group of residents who do not like a new Arco staff member there.

“We’ve bent over backwards to make sure residents have access to everyone” at Arco, Asher said.

Patrice McNeely, a Family Community resident, said some of her neighbors are happy they’ll soon get to move into a newly renovated unit. But mistrust remains after a months-long, winding process that included income certification to convert residents from public housing to Section 8 vouchers, new leases and shifting timelines for relocation during building renovations.

“We felt the trust is gone, and it takes time to rebuild the trust,” McNeely said.

Ward said she has not received any complaints recently from residents after Arco offered $250 to residents for expenses if they wanted to leave the premises for a week and stay elsewhere while construction crews made renovations.

Going forward, Binion said HACP will keep monitoring the performance of its contractors through various metrics, including how efficiently they collect rent from residents; how quickly they fill vacated units and maintenance work orders; and by walking the property to see how well the grounds are being maintained.

Another metric Binion said he uses: “If I walk with them and they've been there for a while, do the kids go up to them and know their names? That means a lot.”

HACP officials said they are also considering a resident survey they could have Arco conduct once renovations are completed and residents have settled into their new units.