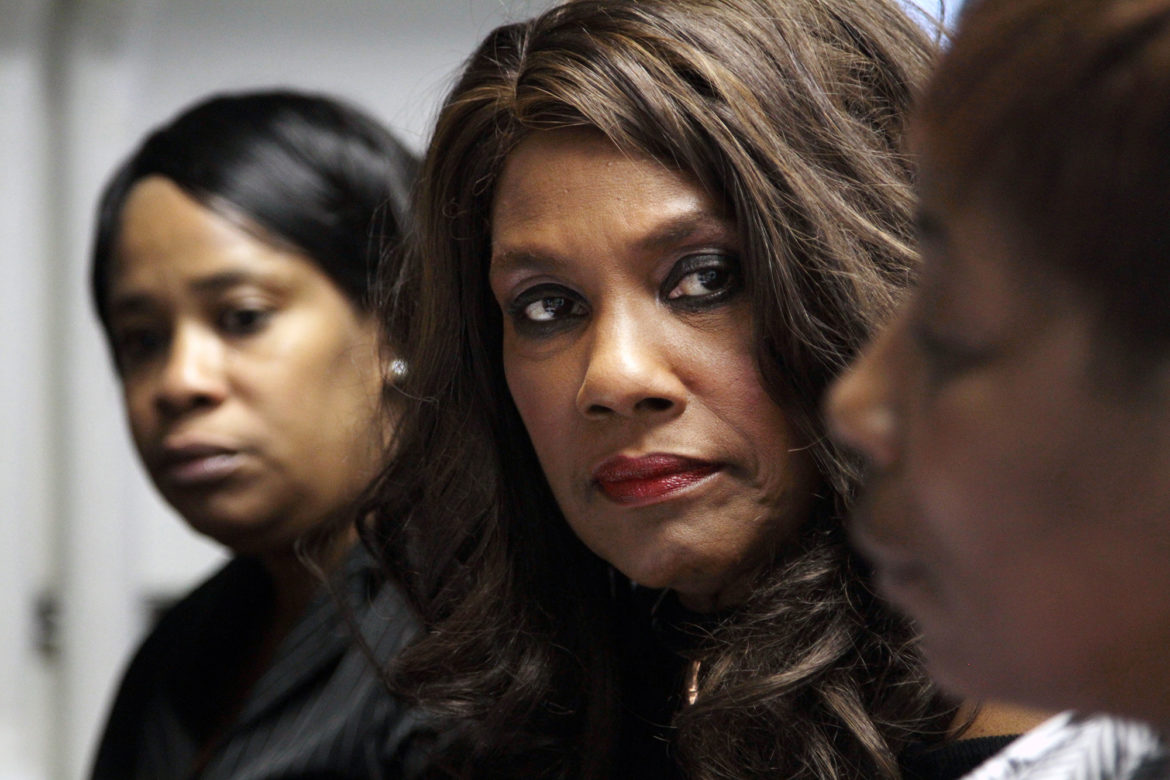 One after another, just like bullets flying on the nearby blocks.

Homewood is a place where a 17-year-old can be shot to death in broad daylight. That happened in September when Daija McCall, who was carrying a large amount of cocaine, was fired at on a Saturday afternoon. Eleven times.

She was killed a short walk from where Douglas’ son Frederick, 28, was shot on a frigid evening in January 2014, the first fatality in one of the deadliest years in city history.

“Once my son was the first homicide, it just began,” Douglas said, waving her arm left to right with a salvo of snaps. “Shot after shot, child after child.”

She recalls being stuck in traffic, the last moments with her son extended as she drove him from his father’s engineering business toward Homewood. Later, she noticed an odd string of missed calls while at church.

Her sister said Frederick had been killed. She didn’t believe her.

Then the detective described his shoes — bright orange and turquoise — and she knew.

Now she hears shots near home, once so close she dropped to the floor and blurted a prayer.

It’s not rare. Thousands of shots are fired every year in Pittsburgh. The bullets fly from handguns and assault weapons, echoing past houses and schools. And the city's black communities experience an unequal share of the resulting chaos and trauma.

Meanwhile, guns remain plentiful, so commonly carried that something like a fist fight comes with the threat of bullet wounds. So how can these conflicts be limited to bruises? The answers aren’t easy to find, but many people are searching. The future of whole communities depends on an end to the violence.

It’s a rare night when guns are quiet.

Since Frederick Douglas was killed in January 2014, more than 8,200 shots have been heard in all corners of Pittsburgh. In that same time, city police have investigated more than 155 gun homicides (all but a handful of the total murders), 460 non-fatal shootings and 600 more shootings that didn’t cause injuries.

The violence shapes when residents go outside, where they’ll visit and whether they’ll feel safe in their homes.

So a simple stroll down the street brings fear.

“You used to go walk to the store about 8 o’clock at night and get a pop or something,” said Connie Moore, 58, who’s spent most of her life around East Liberty.

She peeks at the purse, cracking a smile to explain she’s not presently carrying.

But the point is real. Her son, Hosea Davis, was murdered two years ago in Larimer. He was 37.

That was nowhere near 8 p.m.

It happened in early afternoon.

Police responded to a rapid burst of gunfire — 16 shots from an assault rifle — with several fired while Davis was already on the ground.

Moore proudly calls her son a hero, both for youth outreach work, and for his role in stopping a stabbing at the East Liberty Target in March 2013.

Ten months later, he was killed over the theft of drugs, which Moore believes he had no part in.

Hosea had told his mom he was headed to her house. When she got a call from a relative, she hung up in disbelief.

Moore describes violence that she feels is never ending, all across the city, with mothers crying on the news in what seems like a repeating loop.

“The violence is crazy around here,” Moore said. “It’s non-stop.” Members of Mothers With a Voice hold hands in prayer as a recent meeting gets underway at the Homewood branch of the Carnegie Library of Pittsburgh. (Photo by Ryan Loew/PublicSource)

Many guns, many shootings

He’s right. But the stats were wrong.

A PowerPoint presentation at police headquarters showed a total of 199 non-fatal shootings and gun assaults in the first eight months of 2016.

That would be the lowest total in seven years.

Except the total is actually 261. Not abnormally high. But not low.

A representative from the bureau said the 2016 stats McLay presented to the public on Sept. 30 mistakenly left out two months of data.

PublicSource found discrepancies after reviewing a database of each shooting and finding several cases not reflected by McLay's statistics.

Non-fatal shootings are incidents with a wounded victim. Gun assaults are shootings with a known victim but no injury.

Meanwhile, reports for shots fired were at a six-year high, and gun murders through August were the second highest in the seven-year period, barely trailing that brutal 2014.

Last year, nearly 50,000 firearms were legally sold or transferred in Allegheny County. That doesn’t capture the illegal market, but it shows a high concentration of weapons that can be lost, stolen or traded, often into the hands of young men.

“Citizens have a right to keep and bear firearms,” McLay said. But that “changes the dynamic of every fight, every robbery, every time somebody’s mad at one another.”

In August, 18-year-old Kenneth Murphy was charged with fatally shooting 20-year-old Christopher Rodriguez, who he claimed was going to sell him a gun in Allentown when the one he was holding discharged.

In July, 6-year-old Isis Allen was killed only blocks away in Knoxville. She was shot in the head by 19-year-old Kamau Thomas Jr. who told authorities he’d meant to scare someone else at a nearby house.

Daija McCall sang at her funeral. They were cousins, killed by gunfire only a few weeks apart.

Would Zika make you care?

It shows how people care differently about different things.

If you’re worried about the Zika virus, and you know mosquitoes in an area carry it, you’d care about how it’s treated, because those mosquitos might bite you.

“You can’t always react to a gunshot. If you do that, your head will be on a swivel.”

But with violence, people compartmentalize. If it’s not your neighborhood, you can drive by and let someone else sort it out.

Think of being downtown on the Fourth of July and hearing gunfire rip on Liberty Avenue.

In Homewood this July, shots were reported on 27 days.

Is there a difference?

Thompson, 43, grew up on the North Side as organized gangs were taking hold in the 1990s.

Back then, the Mexican War Streets felt like a war zone, he said, with violence so common that it was desensitizing.

“You can’t always react to a gunshot,” he said. “If you do that, your head will be on a swivel.”

It’s not hypothetical. He’s seen drugs traded for guns. His own brother was fatally shot nearly 20 years ago, and Thompson still hears gunfire on some nights near his North Side home.

As a violence prevention coordinator for the Allegheny County Health Department, he is helping organize a county-wide strategy that treats gun violence as a public health problem.

The point is to recognize what’s worked elsewhere and use it here.

Dr. Karen Hacker, the department’s director, points to Boston as a model. Back in 1990, Boston had 143 murders by guns and other means. Then a deliberate collaboration across the city, which included police, schools, government and outreach workers, coincided with a drop in killings.

“They didn’t want to see all these people die,” Hacker said. “And they all basically put their energy into it.”

Want to see more stories like this? Our nonprofit newsroom depends on your support!

Last year, Boston had 38 total murders. The city is roughly twice the size of Pittsburgh, which had 56 total murders in 2015, with 50 involving guns.

Boston is the original home of Operation Ceasefire, a program based on targeted enforcement and community outreach. It was haltingly tried in Pittsburgh before being remade under McLay, now two years into his tenure.

Now the strategy shows promise, McLay said, particularly in the North Side around Fineview, where shootings escalated earlier this year.

But what about the future?

Stopping violence requires dedicated resources, Thompson said. Not just at the beginning, but for many years, and with support focused on community members that can reach the youth involved in violence.

The alternative is a city where gunfire seems normal, and where trauma is disproportionately felt in neighborhoods that seem left behind as the new Pittsburgh rolls toward a future of urban renewal and self-driving cars.

Douglas said she remembers when Homewood wasn’t feared. There weren’t those echoing gunshots and so many mothers looking for grief groups.

Now, guns pass from hand to hand. They’re carried by young people, at night and in broad daylight, and in strings of violence and retaliation — snap. snap. snap. — they’re fired.