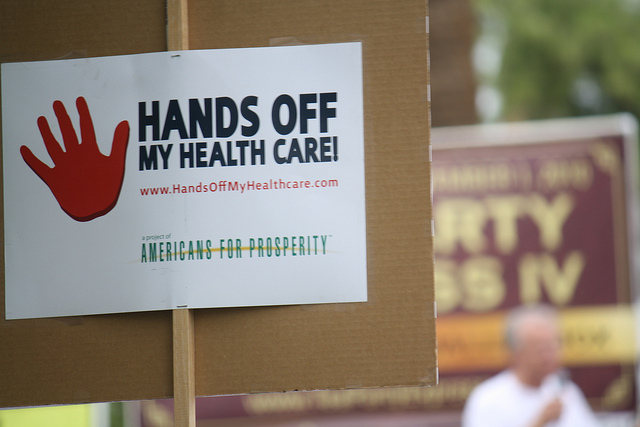 Hands off my health care - Americans for Prosperity

Through the end of August, the groups aired about 8,600 ads in North Carolina, 6,900 in Louisiana and 5,800 in Iowa. Those are three of the nine most competitive races that could swing Senate control from Democrats to Republicans.

The six Koch-connected organizations responsible for the ads are Americans for Prosperity, American Energy Alliance, Concerned Veterans for America, Freedom Partners Chamber of Commerce, Generation Opportunity and the 60 Plus Association.

This ad spending dwarfs other large conservative groups, according to the article:

Even the two main big-money committees co-founded by GOP strategist Karl Rove — American Crossroads and Crossroads GPS — have only aired about half as many ads to date as these six Koch-connected groups.

The negative ads targeting Democrats have focused on a variety of issues, including Obamacare:

And Democrat Gary Peters has been slammed by Americans for Prosperity for supporting Obamacare, which the group contended was “making things worse” for Michigan families.