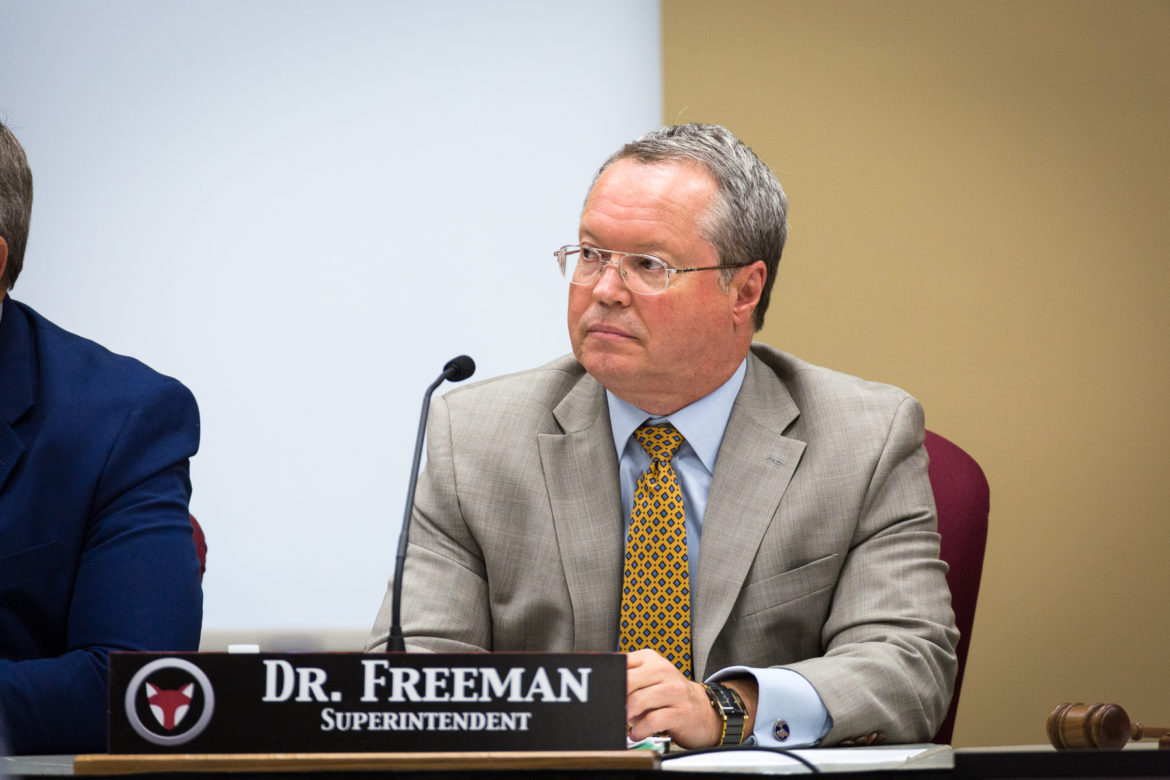 The contracts contained no limits on the number of vacation days that Freeman could sell back to the district at a per diem rate of his annual salary — an aberration among superintendent contracts in Allegheny County.

Fox Chapel Area school board vice president Nancy Foster wrote in an emailed statement that Freeman deserved a more generous contract than other superintendents in the county because of the outstanding success of the district under his leadership and because he is the most senior superintendent in the county with 13 years of experience.

The second most senior superintendents are Timothy Steinhauer in Mt. Lebanon and Margaret DiNinno in Riverview, with 10 years each as a superintendent.

The Fox Chapel Area school board and administration has been criticized in recent months by residents who have complained of a lack of transparency in district operations, demonstrated by the board’s lack of public discussion about agenda items on which it votes each month and administrators’ lack of response to questions asked by residents.

Some of those concerns were aired in a July story by PublicSource.

That story revealed a provision in Freeman’s contract that provides him with a retirement payout of 80% of his annual salary. (His base salary for 2019-20 is $232,553, and he stands to get a flexible spending stipend of up to $5,900, according to his contract.) No other superintendent contract in the county has such a provision on retirement payout.

Residents of the Fox Chapel school district have previously raised concerns about the relationships between Freeman and some board members. Freeman openly supported incumbent school directors in the primary. He posted campaign signs in his yard for board members Eric Schmidt and Lisa Rutkowski. Schmidt lost his re-election bid. Rutkowski won re-election to her seat.

Residents have also cited the district's March advance of $60,000 to the Fox Chapel Crew Club, with which Rutkowski and her children are active. (The crew club repaid $30,000 of the advance in September.) On Oct. 1, Freeman's house in O’Hara Township went on the market for $487,500 with Rutkowski as the listing real estate agent.

The vacation buy-back total was brought to light in a response to a Right-to-Know request filed by PublicSource in August asking for Freeman’s total compensation for the 2019-2020 school year.

Instead of providing Freeman’s annual salary, Right-to-Know Officer David McCommons provided a response that listed only Freeman’s compensation for the month of July, which included a monthly salary increment of $19,377, a $10,000 bonus awarded by the board for meeting his 2018-19 goals, and a $17,083 reimbursement for unused vacation days.

PublicSource then filed another Right-To-Know request to find the total amount Freeman had been paid for unused vacation days during his tenure as superintendent.

The response to that request showed Freeman filed for reimbursement for:

To file for the annual reimbursements, Freeman filled out and signed a “vacation buy-back form.”

In June, PublicSource filed a Right-to-Know request for Freeman’s calendar for the 2018-19 school year. The calendar McCommons provided in response in July did not indicate any vacation or sick days taken by Freeman. McCommons did not respond to a follow-up email request on July 24 for a calendar that included vacation and sick days.

Freeman did not respond to requests for comment on his vacation day reimbursements.

Board President Terry Wirginis, who signed Freeman’s most recent contract that went into effect July 1, 2018, declined to comment about Freeman’s vacation day payments or retirement payout. He said be believed the statement issued by Foster “covers everything.”

Foster noted that Fox Chapel’s academic success is more significant than other high-achieving districts because the district has a free and reduced lunch population of more than 22%, which is higher than the other districts.

She said Freeman’s retirement payout is not out of line because two other Fox Chapel superintendents have received retirement payments. She did not identify the superintendents or the amount of their payouts. Foster said that information would also take time to research and she was uncertain when it would be available.

She stated there should be no expectation that all superintendent contracts would be similar.

“Contracts are all unique unto themselves and range in terms based on a candidate’s previous performance and experience, the district’s specific objectives and goals, the conditions at the individual district and the experiences they had with their last superintendent and what the prospective candidate proposes to deliver in terms of performance metrics... Please do not assume that all superintendent contracts should be created equal,” Foster wrote. 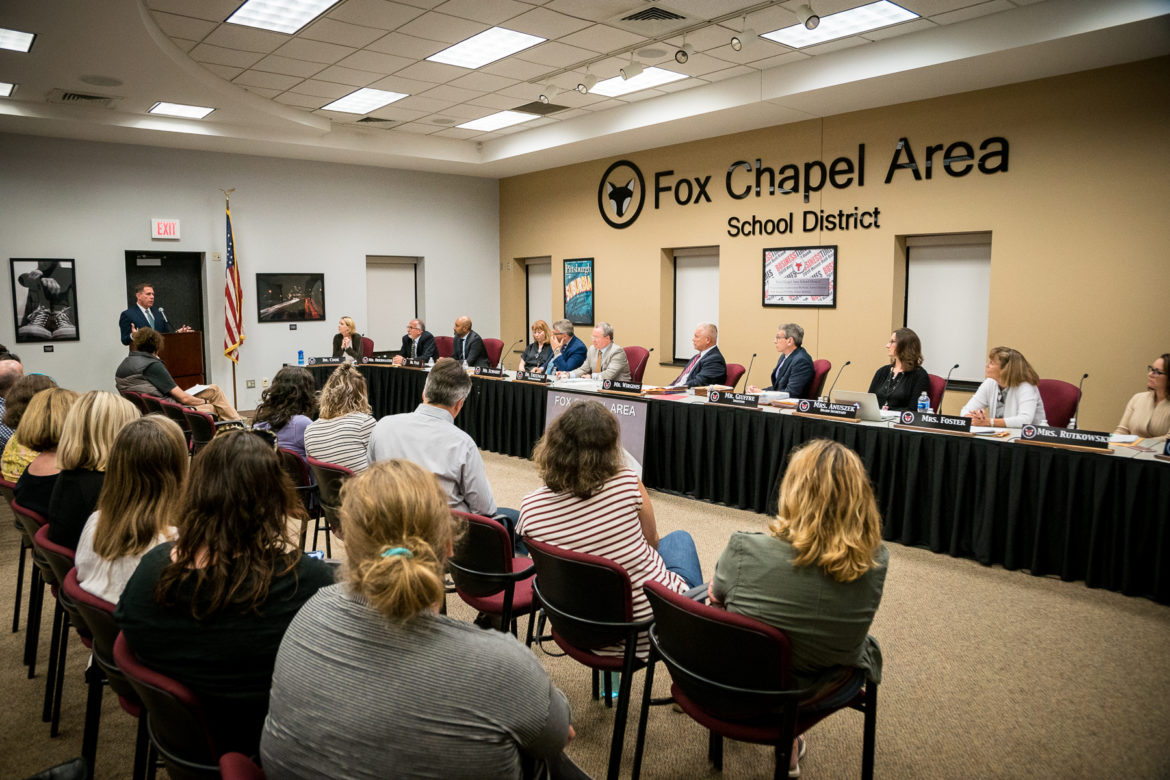 The Fox Chapel Area School District board at a Sept. 9, 2019 meeting. (Photo by Nick Childers/PublicSource)

David Schuler, superintendent of the Township High School District 214 in Arlington Heights, Illinois, is the past president of The School Superintendents Association, part of the American Association of School Administrators. He said superintendents in the same geographic region generally have similar contracts.

Schuler, who was the 2018 National Superintendent of the Year, said most states have a superintendent contract template, with salaries and benefits adjusted by region, that is used for the basis of contract negotiations.

Schuler said generally both school boards and superintendent candidates often research contracts of other districts in the region and use that as a starting point in their negotiations.

“I’ve been superintendent in three different districts in two states. That’s what the board does and that’s what I do. You do area comparatives,” Schuler said.

Mark DiRocco, executive director of the Pennsylvania Association of School Administrators, said Pennsylvania does not have a template but that the organization has a full-time attorney and a part-time attorney who help superintendents negotiate contracts with school boards and district solicitors.

DiRocco said contracts in the same region often end up being similar because there are usually a limited number of law firms that represent school districts in an area and those attorneys are representing multiple districts. As a result, the attorneys are familiar with the contents of superintendent contracts in various districts.

Related: A Fox Chapel district board member is acting as the superintendent's real estate agent. Is it a conflict of interest?

Fox Chapel district solicitor Paul Giuffre does not represent any other school districts in Allegheny County. Giuffre wrote in an email that he was not involved in the negotiations of Freeman’s original contract.

“The board contracted with the Pennsylvania School Boards Association to conduct the search that resulted in Dr. Freeman's hire. His contract was negotiated by the then board president with the assistance of the PSBA consultant,” Giuffre wrote.

He offered no details on who negotiated Freeman’s second contract, which started July 1, 2018 and includes the retirement payment.

DiRocco said the ability to sell back all vacation days, without limit, is not common in superintendent contracts, but that he’s seen it before.

Both Schuler and DiRocco said contracts sometimes allow for superintendents to sell back vacation days beyond the contract’s limit if school work prevents them from taking time off.

They also said school boards will sometimes offer more lucrative contracts to candidates with special skills or abilities or will reward a superintendent who has raised academic achievement or been with the district for a long time without substantial raises or other financial incentives.

“But the vast majority of superintendents want to keep their contracts consistent with their peers in the area,” Schuler said. “I don’t want to be the headline in the newspaper because of my contract.”

PublicSource gathered the contracts of the 42 permanent school superintendents in Allegheny County via Right-to-Know requests. Carlynton School District has an interim superintendent who is paid on a per diem basis.

Upper St. Clair is similar in size and academic performance to Fox Chapel with about 4,000 students and proficiency rates on high school state tests in the 80th and 90th percentiles.

“But the vast majority of superintendents want to keep their contracts consistent with their peers in the area."

Superintendents in larger but equally high-achieving districts — North Allegheny, with 8,500 students, and Mt. Lebanon, with 5,500 students — also receive 25 vacation days in their contracts.

Neighboring Hampton Township School District, another high-performing suburban district with about 2,800 students, offers its superintendent 25 vacation days. In Hampton, the contract has no provision for selling back vacation days on an annual basis. The superintendent cannot get reimbursed until retirement, resignation or termination of his contract and reimbursement is limited to a total of 25 days.

Pittsburgh Public Schools Superintendent Anthony Hamlet, who oversees a district of about 22,000 students, has 25 vacation days under his contract. He can sell back 20 days, including his two personal days, annually.

Freeman’s retirement bonus that provides him with 80% of his current salary is far more generous than any found in other superintendent contracts in the county. In addition, Freeman’s contract provides for the district to deposit $1 for each $2 Freeman puts into a 403b plan with a max of $6,000 annually.

It’s difficult to calculate the exact total of Freeman’s bonus as the district has not yet set his full salary, which will include a flexible spending stipend expected to be issued in January. The stipend is based on academic performance on state tests to be released in the fall, McCommons said.

Here are some examples of retirement payouts in the contracts of other districts in Allegheny County:

The story was fact-checked by Sierra Smith.

⇧ Back to top