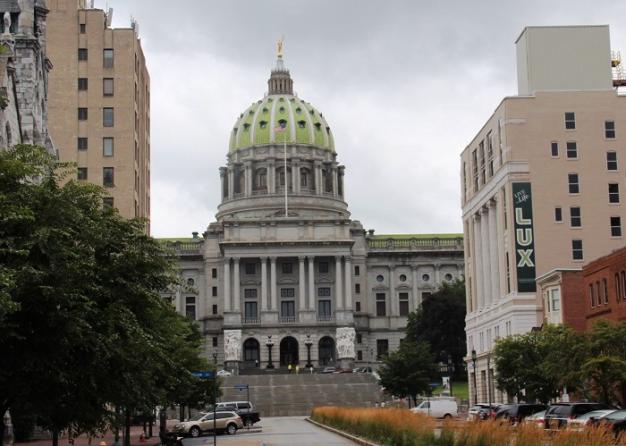 Barry Kauffman sees similarities between the oil and gas business and the business of ‘government relations’—lobbying.

In fracking, gas companies inject water, sand and chemicals underground to extract gas. In politics, Kaufmann says, special interests use campaign contributions and lobbying money, “inject it under high pressure under the legislature, to extract public policy, from which you profit. The two processes are actually very much parallel,” says Kauffman, executive director of Common Cause Pennsylvania, a nonpartisan, nonprofit government watchdog group.

This is what Kauffman thinks happened in the last few years. Common Cause is a left-leaning group, but it has no position on gas drilling.  Kauffman says the industry’s campaign spending and lobbying have helped the industry score key victories in Pennsylvania.

“Number one, we all know—it got them no severance tax,” says Kauffman. “So Pennsylvania is the only major drilling state in the nation that doesn’t have a severance tax.”

A boom in gas lobbying

This began when former Gov. Ed Rendell decided not to pursue a severance tax, and continued under Gov. Tom Corbett, and the passage of Act 13.

The 2012 law established an impact fee on drillers. This is a flat, per-well fee—as opposed to a more commonly assessed severance tax on the gas that comes out of the ground. This fee has given the state and local governments more than $600 million, but not as much as a severance tax would have.

Those who lobbied on behalf of the industry during the Act 13 negotiations say it wasn’t as one-sided as Kauffman says it was.

“It strikes me that this particular piece of legislation was a classic piece of public policy that addressed the concerns of everyone,” says Gene Barr, executive director of the Pennsylvania Chamber of Business and Industry.

The Corbett administration and legislators who championed the bill say all sides involved, including the industry, accepted provisions in Act 13 they didn’t like. The industry, for instance, faced increased environmental controls, higher bonds and fines for infractions.

Still, there’s no question the oil and gas industry put its considerable back into an effort to get the best deal possible for itself.

An investigation by the Allegheny Front and 90.5 WESA found the oil and gas industry spent heavily on lobbying while the state was writing regulations for shale gas. The industry spent $34 million on lobbying in Pennsylvania since 2007, according to the Pennsylvania Department of State's lobbying disclosure database. That includes a high of $9 million in 2012, the year Act 13 passed. The money was spent by 27 companies that have drilled unconventional wells or are 'board members' of the Marcellus Shale Coalition, and five trade associations.

Compare that to the state’s largest environmental groups—who spent about $1.5 million dollars combined in that period—and $330,000 in 2012.

What did this lobbying accomplish? For starters, it appears to have gotten the industry face time with decision makers in Harrisburg.

Consider the meeting calendar for Patrick Henderson, Gov. Corbett’s Energy Executive. Henderson was involved with negotiations around Act 13, and helped put together the Governor’s Marcellus Shale Advisory Commission. Not surprisingly, the gas industry wanted to talk to him.

In his public calendar from late January 2011 to when Act 13 was signed in early February 2012, obtained through a right-to-know request by The Allegheny Front, Henderson had over 130 meetings scheduled with industry executives or lobbyists registered with the oil and gas industry or affiliated business groups. In that same time period, he had 29 scheduled meetings with environmental groups.

That doesn’t mean the meetings ever happened. Nor does it track any of the phone calls Henderson made. Henderson declined to comment for the story.

Dave Hess, a lobbyist for a pair of environmental groups involved in the Act 13 negotiations, said calendar entries only tell part of the story.

“I don’t think you can judge what a person is doing solely on what’s on their calendar,” says Hess.

Hess, himself a former secretary for the Pennsylvania Department of Environmental Protection, wasn’t surprised Henderson had so many meetings with the industry. “If there are five major drilling companies in Pennsylvania, each of them will want to bring their person alone into a meeting with the secretary or with a senate staffer or a Pat Henderson.”

Representatives for the Marcellus Shale Coalition, Range Resources, and Chesapeake Energy met most frequently with Henderson. The lopsided tally on his calendar underscores what Joanne Kilgour has seen since she became director for Pennsylvania Sierra Club earlier this year.

“That confirms the way it feels to be in the Capitol as an environmental lobbyist,” Kilgour says. “There are so many industry lobbyists that are always, always in the Capitol and in-district and have significant resources to pour into just their lobbying effort.”

Questions on lobbying and influence

What is the impact of this lobbying effort? On that question, those in the environmental community are mixed.

John Walliser, a lobbyist with the Pennsylvania Environmental Council, says he never had any trouble seeing Patrick Henderson or legislative leaders working on Act 13. And on some points, he says, Henderson was receptive to his message.

“He was actually favorable to a lot of the things we advanced, and he actually was an advocate for us, with respect to certain things in the General Assembly.”

These included greater protections for vessels containing hazardous chemicals and a clause requiring drillers to restore water supplies to the same or better level of quality if they contaminate them.

But on other matters, environmental groups say they lost out. Like a section in Act 13 pertaining to setbacks for well pads close to stream beds. The section requires the state Department of Environmental Protection to approve a company’s plan to drill close to a stream—unless the agency can show that the drilling plan would pollute the stream.

“We thought it should be the opposite,” says Walliser. “The operator should have burden of proof that there wouldn’t be an adverse impact.”

The setback limitations for the DEP were deemed too vague by a plurality of state Supreme Court justices, who helped overturn it. For some in the environmental community, the setback rule was emblematic of how Act 13 went too far in industry’s favor.

“Those setbacks weren’t worth the paper they were written on—they were a sham,” says John Quigley, former secretary for the Department of Conservation and Natural Resources. A Democrat, Quigley is volunteering for the campaign of Tom Wolf, who’s running for governor against the Republican Corbett. “Clearly, there was a big overreach in Act 13. And that didn’t just happen by itself.”

"Bringing facts to the table"

The industry disagrees that its lobbying had that much influence on the administration or state legislature. “To think that kind of activity could sway a decision either way,” is wrong, says Stephanie Catarino Wissman, executive director of the Associated Petroleum Industries of Pennsylvania, a division of the American Petroleum Institute. Wissman says industry lobbying is more about educating lawmakers on what impact different laws can have on its business.

“The way I look at it, you want to bring facts to the table. You want to be able to educate legislators, policy makers, decision makers [on] how the industry works, and why certain issues are important to the companies,” says Wissman.

Barr, of the Pennsylvania Chamber of Business and Industry, says he lobbied mainly to demonstrate how important the industry is to the state. By independent estimates, the industry has created tens of thousands of jobs in Pennsylvania, and significant royalties to mineral owners in areas with heavy drilling. And the Marcellus shale is now the number one gas-producing region in America, according to the federal government.

Barr says the Marcellus has lowered energy costs for manufacturers, another economic bonus for the state. That’s why he lobbies for the industry.

“You have to work on your strengths. At this point, given what we know, the natural gas industry is clearly a strength for this commonwealth, and we need to capitalize on that.”