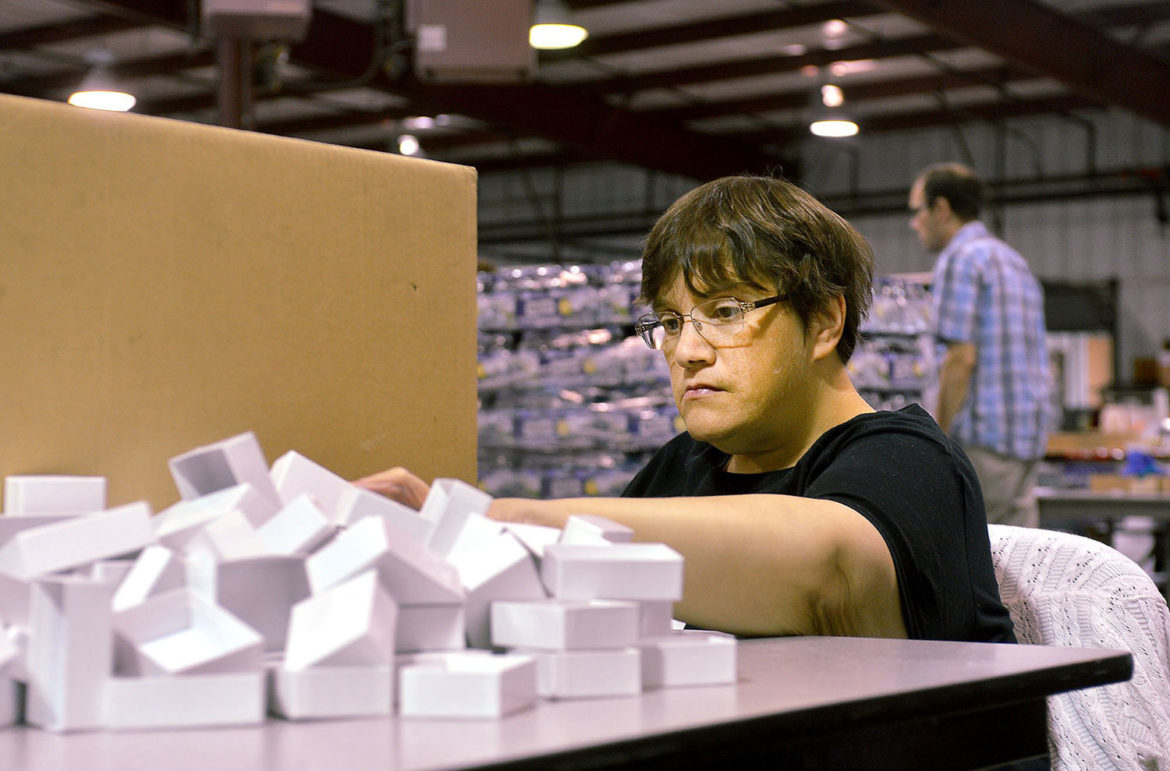 ERIE — For the past two years, from 8:30 a.m. to 3 p.m. most every weekday, Richard Hauser, who is intellectually disabled, has worked.

Hauser, 57, spends most of his day sitting or standing in a bright 11,000-square-foot building owned by the Dr. Gertrude A. Barber National Institute near the foot of East Avenue, across from the institute’s headquarters.

On a recent day, Hauser and his colleagues, also intellectually disabled, put together assembly kits. They sat at a table and placed washers, nuts and bolts, metal rods and instruction sheets on a mat.

Hauser said he enjoys the assembly work, but not as much as one of his other jobs, which is helping to snap lids on new plastic mugs. As do many of his fellow workers, Hauser said he likes the repetition.

And why does Hauser like to work in general?

He responded quickly when asked how much he gets paid: $40 every two weeks, or 50 to 60 cents an hour.

Hauser said he has no problem with his earnings, which are based on rates for piece work. If he wants, he said, the “staff will give me some more work.”

Hauser is one of more than 300 intellectually disabled people who are paid less than the minimum wage for work they perform through the Barber National Institute.

The institute is the sixth-largest employer in Pennsylvania for workers with disabilities who receive what the federal government classifies as “special minimum wages,” according to an analysis by the Pittsburgh-based PublicSource.

The Barber National Institute also employs another 80 or so intellectually disabled people in jobs that pay the full minimum wage, currently $7.25 an hour. Some of those employees tend the grounds of the institute, while the institute pays others to work in the community, performing janitorial services and other basic tasks for nonprofits and businesses.

Barber National Institute officials said they are aware of the recurring national debate over whether the special minimum wage program, allowed under a Depression-era law, is exploitative or beneficial to intellectually disabled workers.

The officials said the program allows people who might not be able to work in regular jobs, primarily because they move at a slow pace, to make money while learning other skills.

The institute’s chief executive, John Barber, said the federal law that established the program recognized that “some people’s productive ability is impaired, and their ability to compete in the open job market is compromised.

“In a world where there is a finite number of jobs, a person whose ability to compete is compromised may be completely shut out,” Barber said.

The program is voluntary, and where Barber National Institute clients work depends on their skill levels and what they want to do, said Paul Causgrove, manager of the institute’s pre-vocational services. He said the clients learn how to socialize — a skill the institute considers as important as learning how to work — and that many clients use their paychecks on bills and other personal expenses.

“It is really not a job,” said Causgrove. “It is job training.”

He spoke on a recent tour of the building where Hauser works. A total of 88 people have jobs there.

“This is their social time,” said Mark Delio, the Barber National Institute’s director of intellectual disability services. “These are their friends.”

The Barber National Institute, one of the region’s largest nonprofits, had 2,546 employees and $66.1 million in total expenses in 2011-12, the most recent fiscal year for which the figures are available.

The institute’s top executives are among the highest paid among the region’s social-service nonprofits and foundations, with John Barber earning $297,110 in total compensation in the 2011-12 fiscal year.

The Barber National Institute in 2012 had 332 people enrolled in the special minimum wage program, according to records the U.S. Department of Labor provided to PublicSource. The department requires the filing of such records every two years.

The Barber National Institute clients work at the building on East Avenue and four other locations: on West 16th Street, and in Corry, Girard and Bridgeville, near Pittsburgh. The jobs include putting together the assembly kits, working on the mugs, putting stuffing in and lids on small boxes for jewelry, putting labels on mailings and unwrapping plastic from jars of jelly.

“We pretty much break even,” John Barber said. “We may lose a little bit.”

The workers who received subminimum wages through the Barber National Institute in 2012 were paid as little as an average of 22 cents an hour and as high as an average of $7.08 an hour for assembly and packaging jobs, according to the Labor Department.

The institute, like any other employer in the program, is required to make sure the special minimum wages are commensurate with regular wages, when each worker’s productivity is taken into account. The program is covered under Section 14 (c) of the Fair Labor Standards Act, which Congress passed in 1938 and which established the minimum wage, overtime and other labor rules. Congress in 1986 passed a law that allows for no floor on special minimum wages.

According to the Labor Department, special minimum wages must be “based on the worker’s individual productivity, no matter how limited, in proportion to the wage and productivity of experienced workers who do not have disabilities performing essentially the same type, quality and quantity of work in the geographic area from which the labor force of the community is drawn.”

The Barber National Institute established its special minimum wages by examining standard productivity for each of the tasks the workers perform. According to the Labor Department filings, the institute used those productivity rates to determine a piece rate, or how much a regular worker would receive for performing each task under the standard minimum wage.

The institute pays the disabled workers based on that piece rate. How much a worker makes an hour is based on how many assembly kits, for example, that worker puts together, no matter how long the task takes.

The special minimum wage program “throws away the concept of time,” Causgrove said. “It allows people to do what they can do.”

He said the Barber National Institute could not afford to pay all of the workers regular minimum wages. He said their productivity would be too low to make paying those wages cost-effective.

“What we would get from the company would never offset what we pay in payroll,” Causgrove said.

Without the special minimum wage program, he said, many of the workers, such as Hauser, would have trouble finding jobs.

“If all our people could work at a competitive level,” Causgrove said, “they would.”

The program gives the employees “the dignity that comes along with earning a paycheck,” John Barber said. “Are these family-sustaining jobs or jobs that make you totally independent? The answer is no.