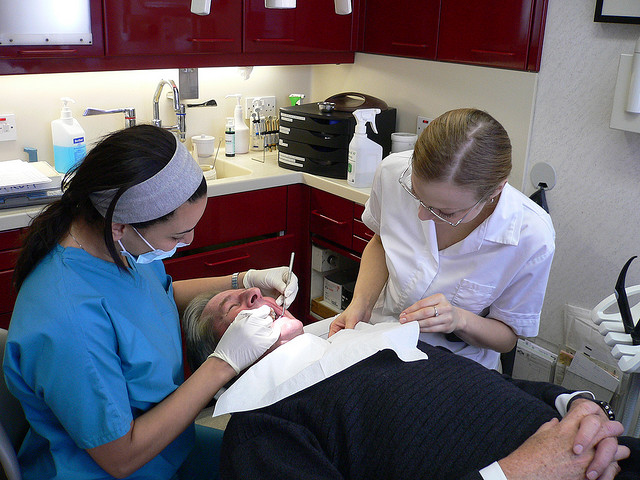 The number of emergency room visits by people in need of critical dental care doubled between 2000 and 2012, and the nation’s new healthcare law doesn’t appear to be chipping away at the problem yet.

According to a USA Today report, the American Dental Association recorded 2.2 million dental ER visits in 2012.

"This is something I deal with daily," said Dr. George Kushner, director of the oral and maxillofacial surgery program at [the University of Louisville]. "And there is not a week that goes by that we don't have someone hospitalized. … People still die from their teeth in the U.S."

Delaying dental care until it gets so bad to necessitate an ER visit affects mostly people with no or limited insurance coverage. That includes the poor, seniors and people with disabilities.

… all but 15 percent of dental ER visits are by the uninsured or people with government insurance plans.

More than a third of working-age adults and 64 percent of the elderly did not have any dental coverage in 2012, according to USA Today. That has its consequences:

Federal figures show that about four in 10 adults nationally had no dental visit in the past year, and more than a quarter of working-age adults, and one in five seniors, have untreated cavities.

Even when they do, it can be difficult to find a doctor to accept the plan because of such low reimbursement rates.

By law, ERs have to see patients even if they can't pay. But although they often provide little more than painkillers and antibiotics to dental patients, the visits cost more than three times as much as a routine dental visit, averaging $749 if the patient isn't hospitalized — and costing the U.S. healthcare system $1.6 billion a year.

"If we were going to the dentist more often, we could avoid a lot of this," said Dr. Ruchi Sahota, a California dentist and consumer adviser for the ADA. "Prevention is priceless."

There are continued efforts to include dental coverage in the Affordable Care Act, but those attempts were unsuccessful as the law was being developed. The American Dental Association is focusing on its appeals to states as well, to encourage coverage for adults in their Medicaid programs.