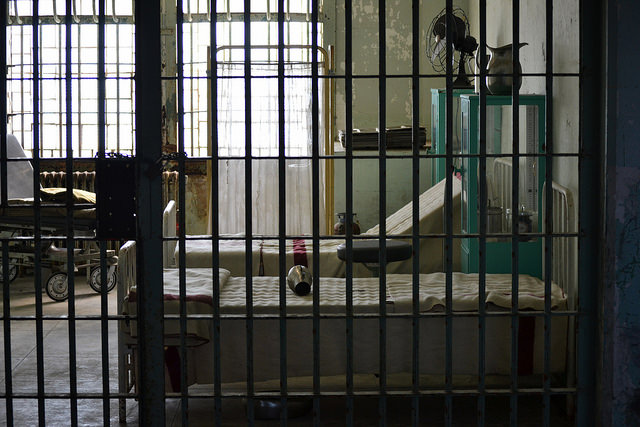 Bulging prison populations and lengthy sentences have left states with large populations of sick and elderly inmates. Now states like Kentucky are struggling with how to return them to society.

As WDRB in Louisville reports, 10 Kentucky inmates were granted medical parole this fall under a new state pilot program. The inmates are supposed to be placed in nursing homes where federal Medicaid will pay for care.

But nursing homes won’t take them. The paroled inmates, eight of whom were convicted for murder, are still in prison.

Warden Aaron Smith told WDRB that the inmates are either mentally or physically debilitated and have been classified as “low risk.”

For the state, medical parole could be a substantial cost savings, but nursing homes fear admitting felons will leave them vulnerable.

Steve McClain, director of communications for the Kentucky Association of Health Care Facilities, said it would be a concern to have to explain to family members of patients why a convicted felon was staying at the facility, and it would be a liability for potential lawsuits.

“We are already caring for a vulnerable and aging population so the safety of the residents who are in our facilities is the top priority,” he said. “There's a liability and a regulatory risk for our providers.”

The Kentucky State Reformatory houses 64 inmates in a nursing home wing at a cost of about $4.5 million each year to run. The cost for these inmates is more than triple that of the typical inmate, according to the story.

As PublicSource reported in October, Pennsylvania houses roughly 5,300 inmates considered “geriatric” by the state. Because a life sentence is mandatory in Pennsylvania, the state also has about 5,300 inmates destined to die in prison (about 1,500 of them are currently considered geriatric).

Pennsylvania allows for compassionate release of sick inmates, but only rarely are inmates freed.

Other states are struggling with aging inmate populations.

In Texas, members of the Senate Criminal Justice Committee anticipate a discussion of geriatric parole to cut the high costs of inmate care. State Sen. John Whitmire, D-Houston, estimates that it could cost about $600,000 or more to keep an inmate breathing with a respirator, according to KUT in Austin.

Lawmakers in Oklahoma are studying the cost of its population of elderly inmates, which has swelled in size more than 50 times over three decades, according to the Oklahoman.

In California, voters last week approved a sweeping plan to shrink its prison population by reclassifying crimes such as drug possession and lower-level theft as misdemeanors. California’s prison population swelled under a harsh “three strikes” law that made life sentences available to repeat offenders.

Despite the roadblock of no place to go, officials in Kentucky said they would continue recommending medical parole and searching for nursing homes to house eligible inmates.