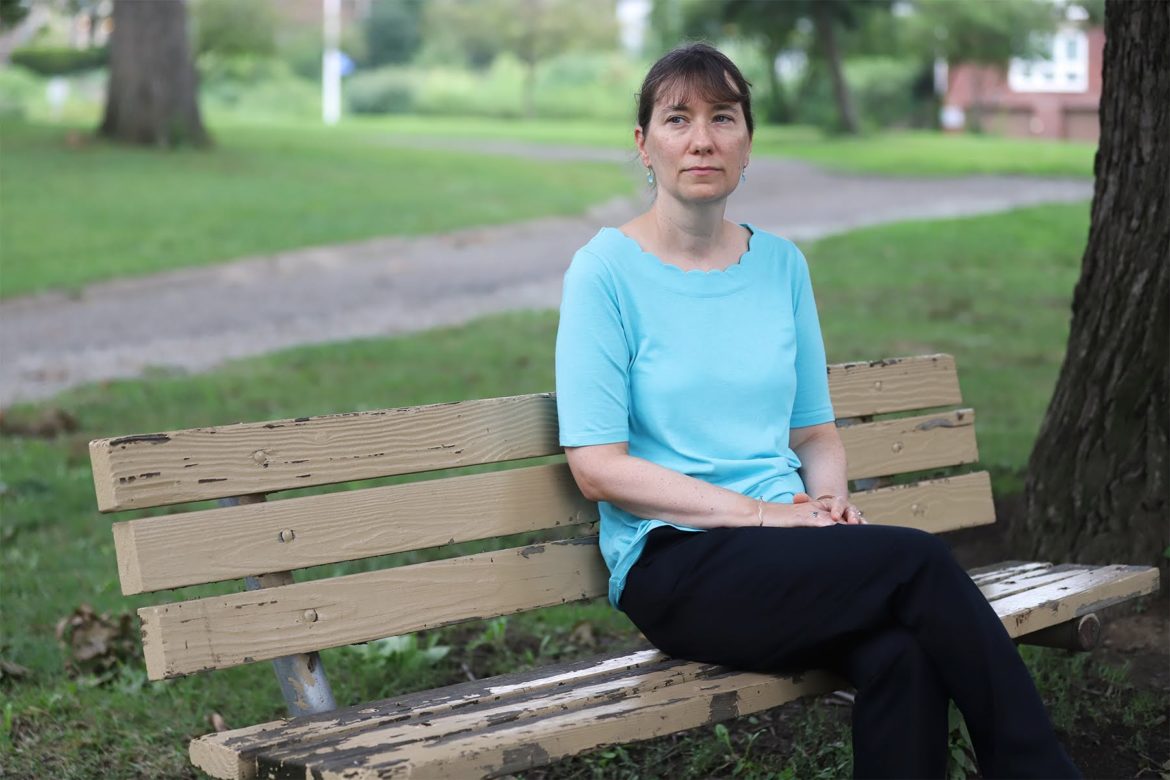 While teaching young children remotely during the pandemic has had its challenges, Laura Lind writes that she's also found it's brought new possibilities. (Photo by Ryan Loew/PublicSource)

I’m on a folding chair in the spare bedroom, holding an open picture book toward the iPad propped on boxes in front of me. Peering over the top edge, I ensure its illustrations are visible in my Zoom rectangle. I periodically glance at the glowing screen to monitor audience engagement. The book depicts John Denver’s song, “Sunshine on My Shoulders,” and I sing over a simple guitar accompaniment created with my phone’s GarageBand app. As it cheerfully plays, I privately grimace when my voice peters out trying to sustain a note.

Though August marks my fifteenth month of teaching music to toddlers and preschoolers remotely, moments like this trigger an internal head shake at how I now spend my days.

In March 2020, I had been working as the music teacher for nearly 20 years, teaching 25 classes per week. My large, bright classroom housed movement scarves and rhythm instruments, an upright piano and a speaker mounted in each corner. We galloped, jumped, flew and spun in that room every day. We bounced beach balls on a parachute. We gleefully threw bath-puff “snowballs” at each other. We clicked rhythm sticks, beat drums and jiggled egg shakers. We danced while bathed in swirling, multicolored disco lights. We shared music, ideas and laughs. We shared a space.

Then the world shut down.

I rarely speak at meetings or even holiday dinners with more than a few family members. To continue working meant swallowing my discomfort and assuming a new position as a TV personality.

My school, a leading early childhood center in Squirrel Hill housed in the beautiful historic building where I attended elementary school, temporarily closed. For a few months, I was unemployed, wondering if I would ever teach again. In May 2020, I gratefully heard I would still have a job. Not my job, though — not the one I had. My school altered procedures to keep the virus from wreaking havoc in an inherently germy environment. Children had to remain in their own classrooms and minimize travel in the building. Teachers needed to stay with one group of children. To reduce children sharing spaces like my classroom, I would be teaching remotely. For the infants and younger toddlers who were too young for Zoom, I would make videos for their teachers and parents to share. For preschoolers and kindergartners, I would appear on a large TV that could be wheeled to each classroom at its designated music time.

My boss asked if I would be comfortable with this. I responded eagerly, while internally cringing at the thought of being on a screen. This might seem incongruous to those who know I have performed in improv comedy troupes for most of my adult life. However, I view performing as a shared experience, working as part of a team. I see teaching in the same light, working in collaboration with the children and other teachers. In my own life, I shy away from solo public speaking. I rarely speak at meetings or even holiday dinners with more than a few family members. To continue working meant swallowing my discomfort and assuming a new position as a TV personality.

Instead of my spacious classroom, I was teaching in a tiny corner of a bedroom. I had to re-imagine my curriculum to fit this space and the restrictions of the Zoom frame. The technology was challenging, with choppy sound, frozen images and dropped calls the norm. I had to remind myself to occasionally look at the iPad’s camera to simulate eye contact, even though that meant looking away from the children.

I was virtually meeting children and teachers new to the school, desperately trying to memorize masked faces crammed into a single rectangle on an often blurry screen. I wanted to connect with these new children, and to stay connected with the children I’d been teaching in person. I wanted our time together to be important. I also wanted to communicate more with the parents; under the new policies they couldn’t enter the school building.

As difficult as it was to rework my curriculum and teaching methods, new possibilities appeared.

I got to know Zoom and recognized I was sharing aspects of my life that I couldn’t share in person. Most conspicuously, I was showing the students a small corner of where I live. Over the years, many children have thought that I live in my music room, and it’s been hard for them to comprehend that I have a life outside of school. I hung my bird clock on the wall behind me to incorporate a small piece of my classroom, and I’ve also used  personal items as props and decorations. I retrieved dollhouse miniatures from my childhood — a diminutive bathtub and bed—and a turtle figurine to provide visuals for a song about a sick turtle. The furniture sparked conversation, a bit like my own personal show and tell. My pet box turtle helped with classes. She is too leery of crowds and new environments for an in-person visit, but she shone on Zoom and was more than ready for her close-up. In subsequent weeks, the kids eagerly asked to see her.

I arranged to have my boyfriend play guitar for the kids. From his home 30 minutes away, he performed favorites like “Twinkle, Twinkle, Little Star.” And though they’d never seen or heard about him previously, they eagerly played Name That Tune with him.

When I was teaching in person, I shared many experiences with the children, but not much about myself. I showed the kids my tap shoes and tapped them on the floor so they could hear their sound. But despite years of lessons, I was too shy to wear them unprompted. I only put them on if requested, and only danced in them when I eventually recruited another teacher who knows tap to join me. I don’t like being the focus. Now, I have no choice but to take center stage. It’s occurred to me that I am sharing more vulnerable sides of myself. Like my turtle, isolation is bringing me out of my shell.

In their classroom, the kids sit facing the large-screen TV. A screen takes away a great deal of information about a person. The subtleties of a voice. The details of appearance. The physical presence and the way someone moves. So, despite the intimacy of being Zoomed in, I have to become more animated and enthusiastic. I don’t want to phone in my interactions. This is no time to hold back. My weeks consist of creating videos and Zoom sessions in which I’m not only public speaking, but public singing, dancing and wiggling. When I see the children doing the same in their rectangle, I’m delighted. I know our communication is successful and we’re connected. I don’t feel so alone.

Going out on a limb included turning myself into a cat. Zoom filters allowed me to don various hats and animal features. Were it possible, I would rather have used the filters on the kids than draw attention to myself. But the reward came when I acquired cat ears and whiskers during the chorus of “The Cat Came Back” and some kids literally fell over laughing. 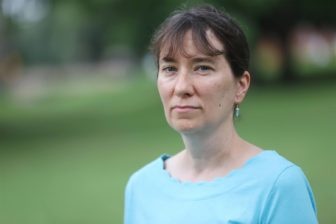 "I don’t like being the focus," writes Laura Lind. "Now, I have no choice but to take center stage. It’s occurred to me that I am sharing more vulnerable sides of myself. Like my turtle, isolation is bringing me out of my shell." (Photo by Ryan Loew/PublicSource)

I sing songs I wouldn’t have attempted previously, finding that being at home in a quiet room, separated from any potential judgment, makes it easier. These slower folk songs and soulful dance tunes are a far cry from “The Wheels on the Bus” and force me to stretch my vocal cords and my courage. A mother e-mailed that her 5-year-old son revealed “tears popped into his eyes” when I sang a slow, pretty folk song — but that no one saw. That anecdote made me glad I’d taken the risk.

Every letter like that from a parent helps sustain me. And every kiss blown from a toddler who was born only months before the pandemic started makes me realize that despite the barriers, connections are being made. I believe it’s these connections that foster musical growth. I could just show a YouTube video. But I think the kids care more about the song when they know the person singing it.

That’s why I’m singing “Sunshine on my Shoulders,” even though it means leaving my comfort zone on a distant horizon. In my classroom, the children heard John Denver’s clear voice as I held up the accompanying picture book. But so much has already been removed from my classes that I don’t want to add more layers between the children and me. I want to maximize our interactions so they can know me as well as possible, quavering voice and all.

I hope that when I return — when I finally bring my books, disco light and bird clock back to my classroom — that those sides of myself will come, too.

Laura Lind, a Pittsburgh native, is an early childhood music teacher, writer and improv comedy performer. If you have a message for Laura, send an email to firstperson@publicsource.org.