Attorney General Eric Holder said the use of data to determine sentence lengths can “exacerbate unwarranted and unjust disparities” in the criminal justice system, according to the Huffington Post.

Holder, who was speaking Friday in Philadelphia before the National Association of Criminal Defense Lawyers, said data can be helpful in predicting where crime might happen and to decide how best to prepare inmates leaving prison.

But using data about a defendant’s education level, neighborhood or socioeconomic background to determine punishment could lead to unfair sentences, Holder cautioned. 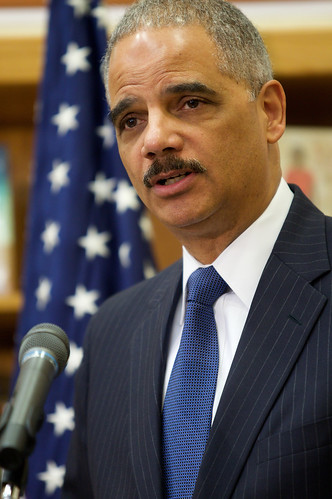 The attorney general specifically singled out the use of risk assessments in Pennsylvania and other states to determine the probability that offenders will commit future crimes.

"Although these measures were crafted with the best of intentions, I am concerned that they may inadvertently undermine our efforts to ensure individualized and equal justice," Holder said. "Criminal sentences must be based on the facts, the law, the actual crimes committed, the circumstances surrounding each individual case, and the defendant's history of criminal conduct.”

The Justice Department simultaneously sent a letter to the U.S. Sentencing Commission, requesting that the group examine how data is being used to determine sentencing.

State law in Pennsylvania calls for a risk assessment to be used to help establish sentence length. The assessment can be used to determine the risk an offender poses of committing future crimes, the statute says.

The Justice Department’s July 29 letter references a related provision in Pennsylvania to determine an inmate’s risk of reoffending in determining parole decisions.

Equal justice, Holder said, must mean individualized justice, and sentences must match an individual’s particular conduct. Punishment, he said, should not be based on factors outside the defendant’s control.

“Criminal sentences must be based on the facts, the law, the actual crimes committed, the circumstances surrounding each individual case, and the defendant’s history of criminal conduct.”

Still, Holder notes how an “explosion” of data analysis has revolutionized fields as disparate as professional sports and criminal justice.

A push for sentencing reform in the 1970s and 80s sent prison populations “soaring,” Holder said. States are now trying to change that — with some success — but reforms may be risky.

“By contrast, the idea of sentencing defendants based on risk factors may help to reduce the prison population, but in certain circumstances it may run the risk of imposing drastically different punishments for the same crimes.”

The Justice Department has asked the Sentencing Commission to look closer at the issue and to give policy recommendations on how data can be used to determine fair sentences.