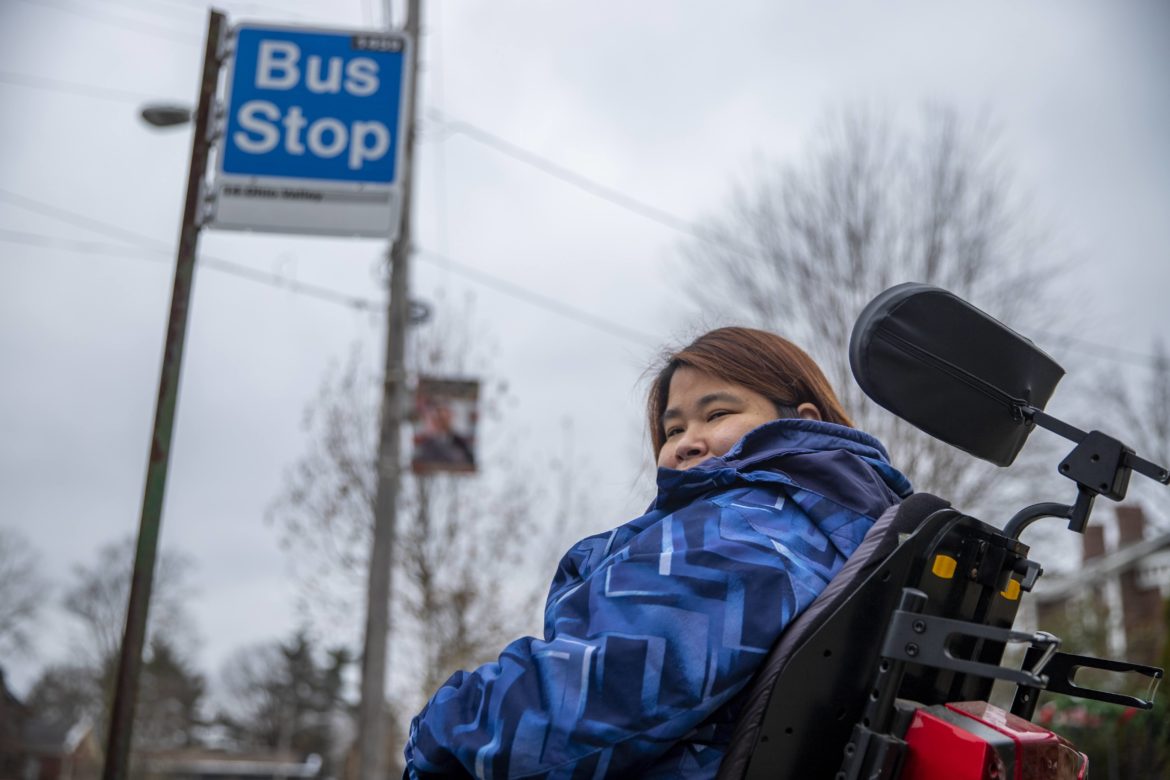 Libby Powers of Sewickley relies on transit from the Port Authority of Allegheny County to get to her workplace in Pittsburgh. (Photo by Jay Manning/PublicSource)

Sewickley resident Libby Powers relies on Port Authority transit because of a disability that prevents her from driving. Typically, she takes public transit to her research job at the University of Pittsburgh five days a week, but, in March, she and her coworkers switched to telework due to the COVID-19 pandemic. Still, she uses transit to get around and certainly noticed the reduction in service the Port Authority implemented toward the beginning of the pandemic.

“Being a person with a disability, public transit has become a way of life for me,” said 33-year-old Powers. “It helps me to get from point A to B; it takes me to places I want to go explore, like in the city; and it helps me be as social and as involved in my own community as I want to be.”

About three months ago, her employer started having staff come to work once a week and telework the rest of the week. She’s starting to use transit more, and she’s seeing more frequent service and more people again.

“It’s slowly started to pick up again, with the return of students… I would see them or I would also see, often, doctors and nurses coming and going from the hospitals riding the bus,” Powers said. She doesn’t worry about catching the virus on the bus — most riders she’s seen wear masks, though she has seen some people get on and sit down without one.

The Port Authority’s ridership has grown since the early days of the pandemic when buses and the light rail emptied out, but with less to do around town and more telework, it’s dwarfed by normal numbers. And as the pandemic continues to strain the economy, advocates note that low-income riders still depend on transit but find it harder to afford.

While the Port Authority still limits capacity at 10 to 25 riders at a time depending on the size of the vehicle, service has ramped up significantly since the start of the pandemic, when Port Authority cut service across the board by about 25%. On Nov. 22, new schedules took effect that increased service on bus routes in high demand in areas like the Mon Valley. The Port Authority has also added weekend service to many of the routes, something crucial for workers with non-traditional work schedules. 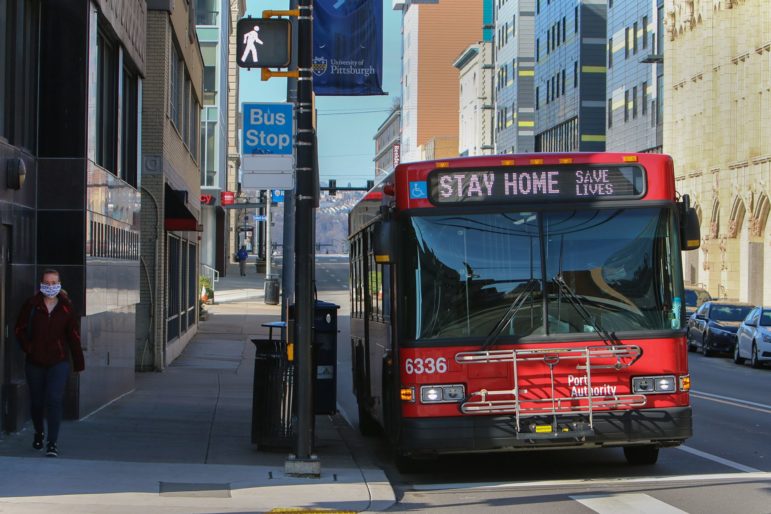 On Forbes Avenue in Oakland, a person wearing a face mask stands near a Port Authority bus adorned with the message "Stay Home, Save Lives." (Photo by Kimberly Rowen/PublicSource)

Laura Wiens, executive director of the activist group Pittsburghers for Public Transit [PPT], said PPT has been calling for the Port Authority since April to move service away from routes with significant declines during the pandemic and add service frequency to routes that have mostly maintained pre-pandemic ridership. The Nov. 22 schedule changes start to do this, Wiens said. Before, Wiens said, far too many buses and trolleys went unused to wealthier, whiter communities and far too few went to communities largely containing individuals of color and with low incomes.

“Their unwillingness to do that for the last eight months, or their reluctance to do it, at least, was a huge problem,” Wiens said.

PPT has also been pushing for an emergency low-income fare program that would allow riders to show their EBT cards in lieu of paying fare.

“Low-income people are, first of all, hardest hit by COVID’s economic effects as well as the public health impact, and they’re disproportionally the people that are most reliant on the bus,” Wiens said. “So, $2.50 is enough of a hurdle that it keeps people from accessing all the other essential things they need to get to.”

Brandolph said the third-party study of Port Authority fares that started more than a year ago is still ongoing with no expected completion date yet. He also noted that the massive drop in revenue throughout the pandemic makes it difficult to consider fare changes.

Federal CARES Act funding has allowed The Port Authority to apply for reimbursements on qualified expenses up to $143.5 million, and the latest federal aid package includes additional transit funds. Through July, Port Authority has invoiced about $36 million and are “currently preparing a significant invoice to cover August through November,” Brandolph wrote to PublicSource.

“Having 80 to 70% of our fare revenue disappear for an extended period of time certainly has put us in a precarious situation, and any discussion, really, of fares is gonna be a very serious one in that we need to ensure that we don’t have to cut service because we are spending money elsewhere,” Brandolph said.

Wiens said she does not believe that concern for the authority’s funding crisis contradicts the need for a low-income fares program.

“If the financial solvency plan for Port Authority relies on extracting fares from the people that are least able to pay, then it’s not a plan at all,” Wiens said.

Similar pandemic-era data specific to Allegheny County is hard to find. Brandolph said it appears there are more trips during the pandemic that stay within a community, possibly implying people are using transit often for trips like grocery shopping.

Approximately 38 percent of Port Authority riders are people of color, according to the May 2020 Transit Rider Demographic Analysis that pulled data from 2018 American Community Survey five-year estimates. Black residents represent 28% of riders — more than double the percentage of Black residents in Allegheny County. Individuals who make less than $25,000 represent about 38% of riders, and those who make less than $75,000 represent more than 80% of riders.

Transit vehicles tend to be crowded and enclosed, which made some people worry they could be a dangerous spreader of the virus, but studies now show that mask enforcement and capacity limits have made riding transit safe overall. That being said, two Port Authority drivers, a 34-year-old and a 57-year-old, died of the virus in early December.

“In my opinion, both locally and nationally, it’s a clear reluctance for people to be in close proximity to other people in an enclosed environment,” Caldwell said. “So we are seeing people taking other modes of transportation, and we are seeing vehicle miles traveled going back up to pre-pandemic levels here in the state of Pennsylvania and nationally.”

Transit still serves riders who need to get to work in health care or the food service industry, but more and more white collar workers are working from home. As COVID-19 cases rose, Pennsylvania again mandated telework, unless impossible. And it’s not hard to imagine some companies will use more telework even after the pandemic.

“There was a lot of fear of loss of productivity if that would happen, but I think companies have seen the opposite, have seen increased productivity. So yes, that’s a big concern,” Caldwell said. “And if a system has been reliant on the revenues of that, it changes their revenue models significantly.”

Projecting and preparing for a post-pandemic world is difficult, Brandolph said.

“Unfortunately, we don’t have the luxury of looking at service beyond early 2021,” he wrote. “However, if we did I am sure we would - and at some point may need - to adjust our service to better serve those who are riding."

Powers has more or less been able to use transit when she needs to, but her regular qualms about access to the service as a person with a disability have not gone away. She requires assistance to board a bus, and, sometimes, she says it seems like drivers pass her knowing she’ll require more of their time. During the pandemic, with capacity restrictions, decreased service and more time needed to enforce masks, she feels like it’s only gotten worse.

“I think it’s more of a problem now because they’re already short on drivers,” Powers said. “So catching a bus and hoping that the driver is willing and amenable to making sure you get on safely so you can get to your destination has become a more glaring issue now that the pandemic is around.”

Still, transit remains a necessity, and Powers continues to use it:

“While wearing a mask and practicing social distancing and things, I made the choice to continue to live my life and live it as if the virus is here but not letting it interfere or make me afraid to interact with the public.”