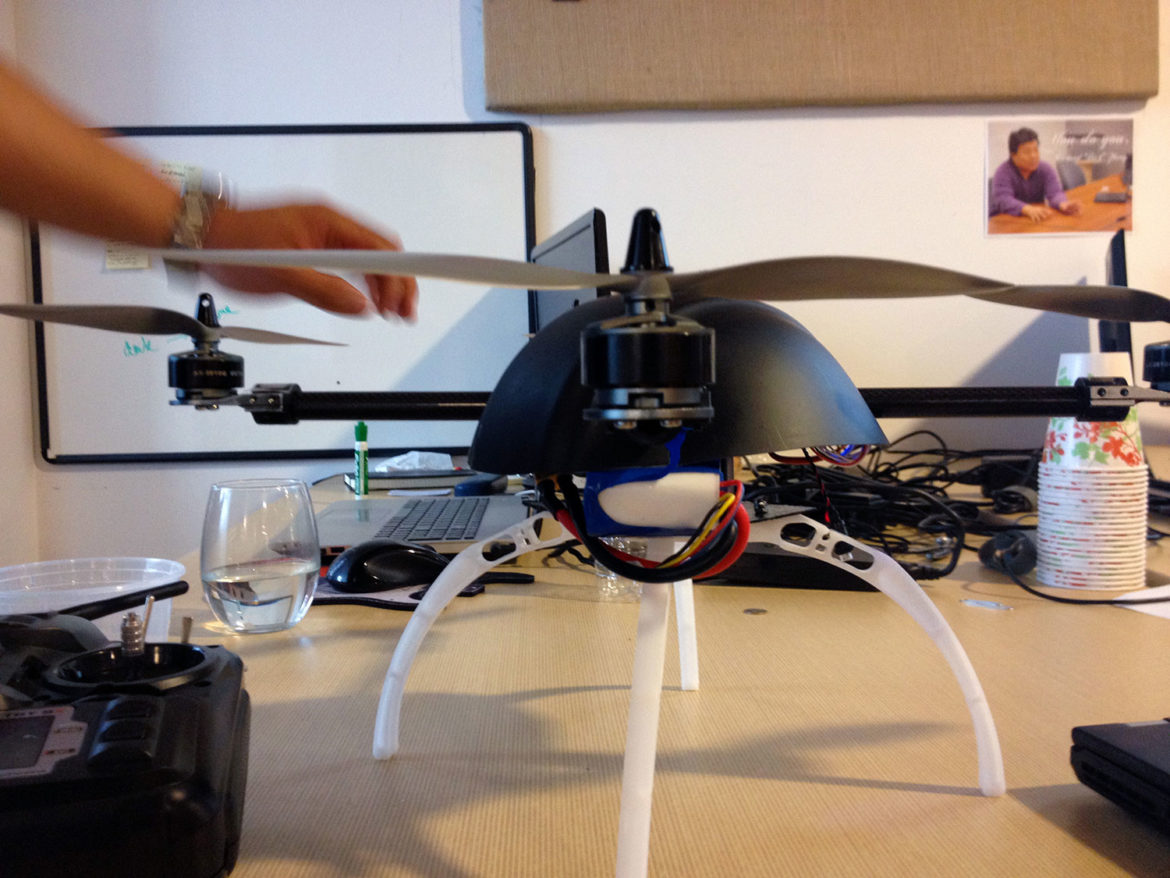 Small, high-tech drones are being used to make movies, shoot photos for the media and find sick or diseased crops in farm fields across the country — even though the government restricts commercial use.

Now, some are saying that drones could make operations safer in an industry Pennsylvania knows well: Energy.

Unmanned aerial vehicles, better known as drones, could be used in oil and gas operations for anything that is “dangerous or dirty to do by people,” said Michael Blades, who analyzes the drone industry for the global research firm Frost & Sullivan.

The federal government has used drones for military purposes for years. Now, small commercial drones are pegged to become a multi-billion dollar industry, and could be used for many different industries, analysts predict.

In Pittsburgh, for example, drones are being touted for use by the natural gas industry. In a Shadyside startup company, a small black drone with skinny white legs hovers in the hallway. It buzzes aggressively as it lifts off, musses the hair of its creator and then lands softly on the floor.

Dick Zhang, chief executive of Identified Technologies, smiles like a giddy kid as he demonstrates the capabilities of the drone.

The high-tech quadcopter, a helicopter with four rotors, is equipped with computers and sensors that gather data and then transmit it in real-time to the cloud. The computers make calculations 400 times every second to keep the drone flying on track.

“We deliver these intelligent UAVs (unmanned aerial vehicles), or drones, so that they could be used for anything, from infrastructure detection to gas leak detection on pipelines,” Zhang said.

“We hear stories from [pipeline companies] where they'll spend days trying to cover just a mile of pipeline in extremely dangerous terrain,” Zhang said, explaining that pipelines are sometimes built in hard-to-reach places like mountains or forests that can be tough for human inspection, especially in poor weather.

“Why put someone in danger when you can have a robot do it for you?” Zhang said. He said he’d eventually like to use his drones to monitor air emissions from oil and gas operations.

Zhang learned what he knows about robotics while studying mechanical engineering at the University of Pennsylvania. He dropped out after a few semesters to start his company and is now part of Alphalab Gear, an incubator for tech startups in Pittsburgh.

So far Zhang’s company has raised $350,000 in capital and has one client, whom he won’t name, but whom he says is a “major player” in the energy industry. His drones monitor compressor stations and pipelines for the client, he said.

Zhang might be ahead of the curve in Pennsylvania. It doesn’t appear that energy companies in the state are eager to use drones in gas operations yet, unlike companies in other states that extract oil and gas, such as Texas and Alaska.

Travis Windle, a spokesman for the Marcellus Shale Coalition said he doesn’t know of any gas companies using drones here. And several of Pennsylvania’s top drilling companies told PublicSource they are not using drones at this point.

This could be because federal rules for commercial drone use aren’t in place yet.

The Federal Aviation Administration has been slow to pass new rules on commercial drones that would integrate them into the national airspace, something Congress ordered it to do by 2015.

That means that companies or individuals currently using drones for commercial purposes are breaking the FAA’s policy that restricts their use without the agency’s approval. (Currently, public entities including local and state governments and public universities can apply for a waiver to operate drones.)

To date, the FAA has fined two drone users for reckless flying. However, in March a federal judge for the National Transportation Safety Board overturned one fine of $10,000. It ruled that the FAA’s policy banning commercial drone use was only a guideline, and the agency had no legal authority to enforce it.

The FAA is appealing the ruling.

The agency has only certified two unmanned aircraft models for commercial use: Insitu’s ScanEagle and Aerovironment’s Puma AE. The ScanEagle drone was permitted to Conocophillips to monitor offshore drilling operations in Alaska, according to Les Dorr, an FAA spokesman.

On June 10, the FAA gave approval for oil giant BP to use the Puma AE drone for aerial surveys in Alaska, the first time the agency has allowed drone use over land.

“Using the information generated by the Puma’s sensors, BP hopes to target maintenance activities on specific roads and infrastructure, which will save time and support safety and operational reliability goals,” according to an FAA press release.

According to a recent Houston Chronicle article on drones, energy companies worldwide are testing new ways to use drones to save time and improve safety. Drones could eventually become an integral part of oil and gas operations, the article states.

"It's coming," Curt Smith, a director at BP's chief technology office in Houston, told the newspaper. "The question is how long will it take."