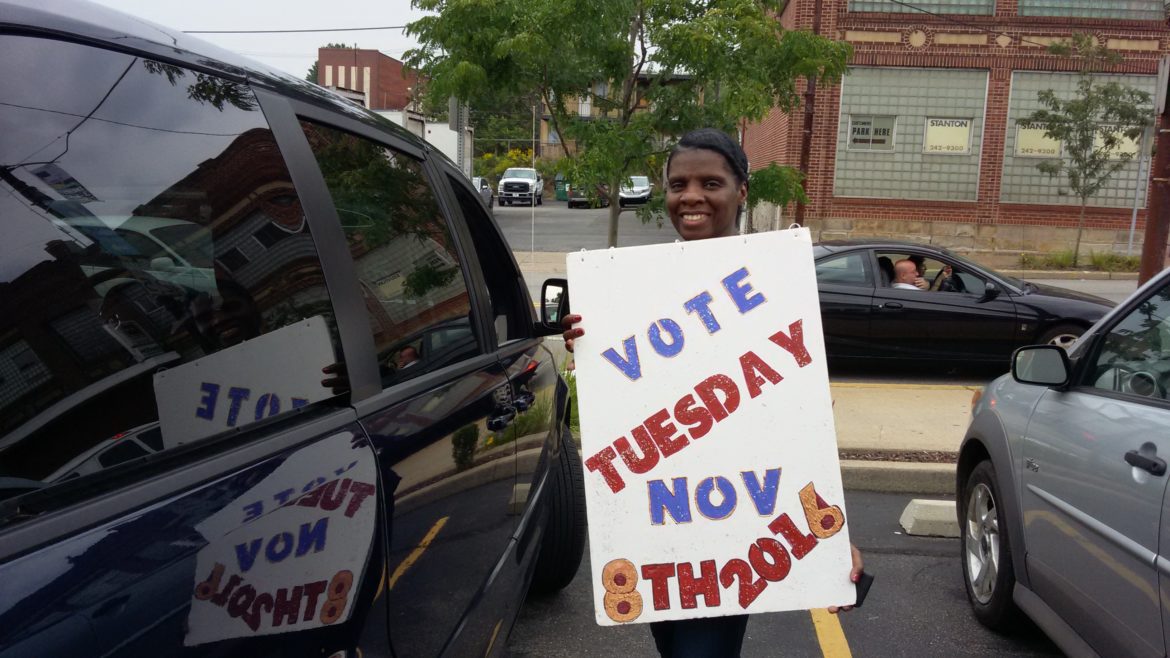 voluteer in Wilkinsburg asking passersby to register to vote

Nearly every time Elaine Harris-Fulton asks the question, she gets a version of, “I’m already registered.”

One man, hurriedly passing by her folding table along Penn Avenue in Wilkinsburg, throws in an explanation, “I’ve filled out five forms already.”

He’s probably not registered, she says. In her experience, some people say that so they don’t have to stop.

Harris-Fulton is a volunteer with the Wilkinsburg Family Support Center, one of the nonprofits  participating in a Western-Pennsylvania wide effort to get people representing minority populations to register and vote. The Greater Pittsburgh Nonprofit Partnership (GPNP) with funding from The Pittsburgh Foundation and the national group called Nonprofit Vote is organizing the effort, which aims to get at least 4,250 people—250 from 17 nonprofits each—registered and to the polls.

How successful they’ll be won’t be known until early 2017 when data will be compiled and analyzed, GPNP executive director Samantha Balbier said, but it should show if nonprofits in Western Pennsylvania are an effective vehicle for increasing voter turnout.

As it stands now, voter turnout among minority populations, particularly blacks and Latinos who use the services of nonprofits, is much lower than among other groups.

In the 2014 midterm election, for example, only 38 percent of registered black voters nationwide made it to the polls. Yet 49 percent of those who registered with the help of a nonprofit cast ballots, a study by Nonprofit Vote found. Turnout increased similarly among the Latinos when a nonprofit registered them to vote.

In a study leading up to the 2014 election, Nonprofit Vote found that the people nonprofits registered to vote were much more likely to make it to the polls than people who registered on their own.

On the ground, this effort means folding tables and handing out registration forms along Penn Avenue in Wilkinsburg, with volunteers calling out to passersby.

There are more volunteers and registration forms at the Jewish Community Center in Squirrel Hill. Here volunteers are focusing on parents dropping their kids off at a daycare center and asking them if they are registered to vote.

The work is not as straight-forward as it sounds. Because federal law prohibits nonprofits from endorsing a particular party or candidate, volunteers have to play the civic participation card and only ask if people are interested in registering, a question many find off-putting.

Even though Nonprofit Vote’s 2014 study showed that nonprofits’ efforts pay off when they register voters, the share of eligible voters who don’t register—let alone go to a voting booth—remains high.

There are those, of course, who believe their vote won’t matter, even if they cared enough to cast one. One woman in Wilkinsburg, who angrily refused a volunteer’s offer to register, said she wouldn’t vote because the election was “fixed” and “the rich always win.”

Or, consider Jan Jones, a nurse who told a volunteer in Wilkinsburg she planned to vote but is quickly losing faith in politics. Her son, who is 26, refuses to vote, she said, and she’s been thinking he might be right. She’ll still vote for Hillary Clinton this year to keep Donald Trump out of office, she said, but she’s becoming pessimistic.

Over the course of four hours, Harris-Fulton registered less than 10 people. She couldn’t get many people to stop by her table, even though thousands flooded to the KFC across the street (the fast-food chain was giving away 10,000 free boxes of chicken that day as part of an annual event).

Pam Simmons, who also volunteers with the Family Support Center, thinks a number of things explains the apathy. “They don’t know who they’re voting for, or what they’re voting for. Or they feel like their vote doesn’t matter. Or they’ve probably voted before and from what they’ve seen, it didn’t matter,” Simmons said.

But that attitude, according to Darrin Carter, who is registered and plans to vote, is one that the younger generation of black people and other minorities need to fight. Carter, 51, said he’s confused and put off by this election cycle, too, but that voting is still an important way to speak out.

“They don’t trust what’s going on and they don’t want to vote,” Carter, who lives in East Liberty, said. “I think it’s a problem. They need to get with it and vote.”

For some, like Latasha Jordan, the threat of a Trump presidency is enough to motivate a trip to the polls. But for others, like Jonna Bennett, who filled out a change of address registration in Wilkinsburg, communities like hers could be in danger if the black people who live there don’t vote in November. Or, as Lori Jackson, 53, put it: Not voting “kills the community.”

“You staying out doesn’t help the community,” she said. “Stand for something, this is a serious time.”

Deadline for voter registration is Oct. 11.