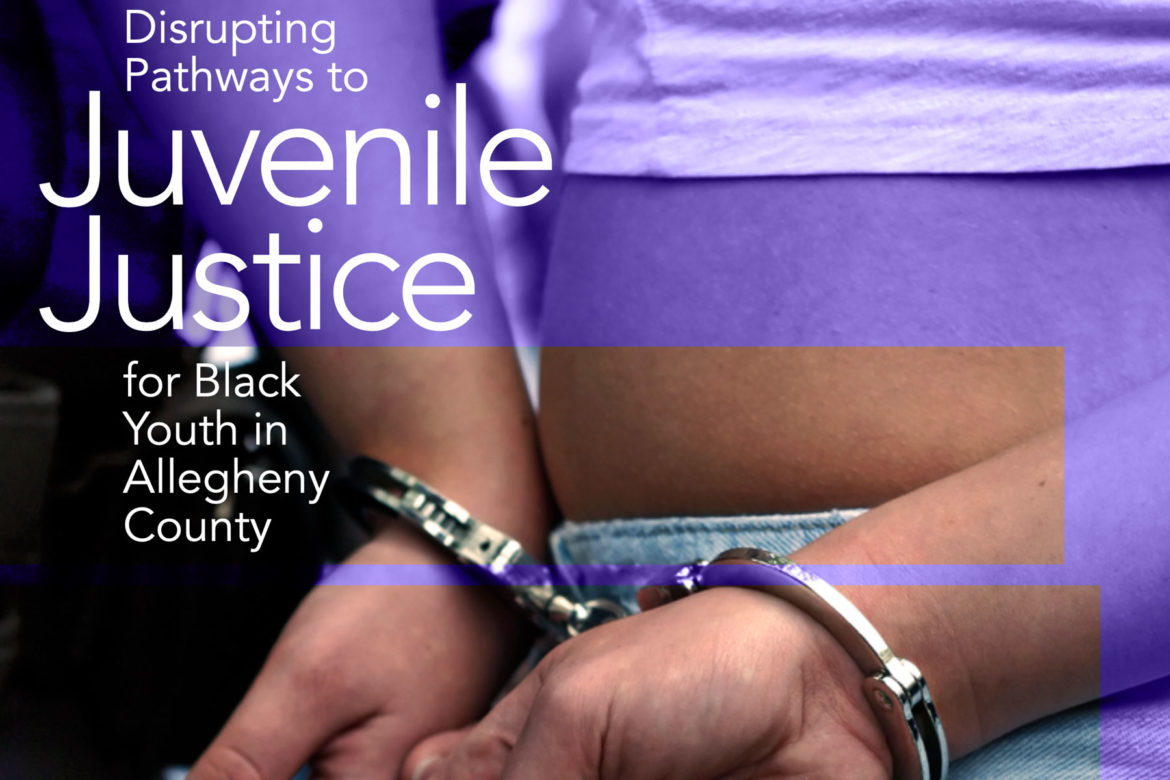 Overcriminalization of Black youth in Allegheny County has been a persistent issue, and a new report shows that schools are playing an outsized role in referrals to the juvenile justice system.

A virtual town hall to discuss the Black Girls Equity Alliance report with a panel of stakeholders is set for Sept. 17, from 3 to 5 p.m. Registration is available at this link.

“People talk about the school-to-prison pipeline, but we wanted to know what that looks like for us specifically in Allegheny County,” said Kathi Elliott, CEO of Gwen’s Girls and convener of the Black Girls Equity Alliance, who put together the report. “We wanted to take time over the past year to actually take a deeper dive into what is happening with our girls.”

Released on Monday, the new report reveals the severity of Black youth criminalization as a manifestation of systemic racism in Allegheny County and highlights ways of disrupting the pathways that lead to juvenile justice system referrals. Using data collected and analyzed in collaboration with local organizations over the past four years, the report examines the disproportionately high rates of referrals among Black youth and identifies areas for potential reform.

Pittsburgh Public Schools [PPS] Superintendent Anthony Hamlet, who attended a Monday press conference about the report, named successful efforts in reducing suspension rates and prohibiting non-violent suspensions for students during his tenure. Still, he acknowledged that those broad reductions are not enough. “While suspensions and school arrests have decreased under my administration, we can and must do better to protect Black children in Pittsburgh,” Hamlet said.

Here are a few major takeaways from the report, from why juvenile justice referrals are so prevalent in Allegheny County to what some local leaders have to say about potential solutions to these issues.

Allegheny County’s referral rates to the juvenile justice system are much higher than national ones, with Pittsburgh Public Schools as a root cause

While the total number of referrals to the juvenile justice system in Allegheny County has decreased over the past 15 years, the rates for Black youth have increased. Black girls are 10 times more likely to be referred to the juvenile justice system than white girls, and Black boys are seven times more likely to be referred than white boys, according to data the report cited from Allegheny County Juvenile Probation Office. “When you have numbers this high, that’s not just one child or one group of kids behind it,” Elliott said. “That indicates a systemic issue.” 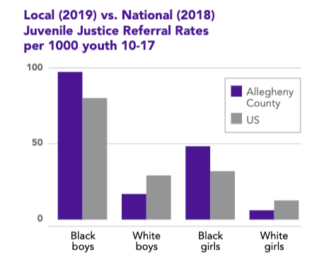 These local referral rates are higher than the national averages by 56% for Black girls and by 23% for Black boys. But the rates are lower by 57% for white girls and by 46% for white boys. “Our lower than national rates tell us we know how to avoid referring youths to juvenile justice, but that we have very different systemic practices for white and Black youth,” said Sara Goodkind, an associate professor at the University of Pittsburgh’s School of Social Work, at a press conference on Monday.

Pittsburgh also fares worse in referral rates than other cities across the country. This new report references data collected by Goodkind and others for the City of Pittsburgh’s Gender Equity Commission showing that Pittsburgh schools refers students to police at higher rates than 95% of other similar public school systems. Goodkind points to referrals by PPS police as one reason for this. “More than half of the arrests of Pittsburgh youth last year were made by Pittsburgh Public School police,” she said, noting that nearly two-thirds of arrests of Black girls came from the school police as well. Earlier this summer, local education and social policy experts called for the removal of police from Pittsburgh Public Schools in favor of restorative practices and mental health services.

What the prevalence of disorderly conduct charges may indicate

The report also presents data about the types of offenses that prompted arrests from the Pittsburgh Public Schools police in 2019. More than half of the charges for Black students were for disorderly conduct.

Goodkind described disorderly conduct as “a catch-all charge that includes things like excessive noise, obscene gestures or language and lots of other typical teenage behaviors.”

These charges, she and the report note, are subjective and often involve implicit or explicit bias. Elliott said one example of this is adultification bias — a form of prejudice where Black youth are expected to act older than they are and thus held to a higher standard of behavior than appropriate. “Because they may be seen as physically older, they’re expected to act as if they’re 18 years old,” she said. “So some of their behaviors are then seen by police as disorderly conduct.”

How a referral snowballs

Ghadah Makoshi, a community advocate for ACLU Pennsylvania who contributed to the report, said at the Monday press conference that these charges and summary citations are more serious punishments than they may seem. “For starters, they are adult criminal offenses,” she said. Youth are required to appear before a magistrate and are not provided legal counsel for the process, Makoshi noted. “So they may not even understand what their rights are.”

Worse yet, these citations often come with hundreds of dollars in fines. “That’s how these minor infractions quickly escalate,” said Makoshi. “If they are unable to pay these fines, they are then charged separately with a failure to comply charge and then referred to the juvenile justice system.”

Elliott saw stories like this pop up across the data the team analyzed for the report. She remembers one girl who got upset in a retail store and was charged with disorderly conduct in addition to receiving a fine for $300. “Well, she’s a kid, she’s not working,” Elliott noted. “So she can’t pay the fine and that ends up being a pathway to the criminal justice system.”

What can be done?

Despite the troubling implications of the data discussed in the report, Kimberly Booth, assistant chief probation officer in the Allegheny County Juvenile Probation Office, said she believes there are several opportunities for reform. Instituting a moratorium on summary citations in schools as well as reallocating funds used for school police toward mental health counseling — the former of which has already been instituted by Philadelphia Public Schools — are two steps Booth said can be taken to make progress.

Though Hamlet mentioned progress in reducing total numbers of suspensions and related disciplinary action, Elliott noted that more needs to be done to reduce the disproportionate referral rates. She expressed hope that these new findings will help Hamlet and other institutional leaders and stakeholders to better identify the root causes of these referral rates.

“The majority of the people we’ve been in contact with about these issues have pretty much recognized and acknowledged that there’s a problem,” she said. “We’re now starting to have deeper conversations about what we need to do and figure out how we now come together to address these issues collaboratively.”

Sophie Burkholder is a PublicSource editorial intern. She can be reached at sophie@publicsource.org.