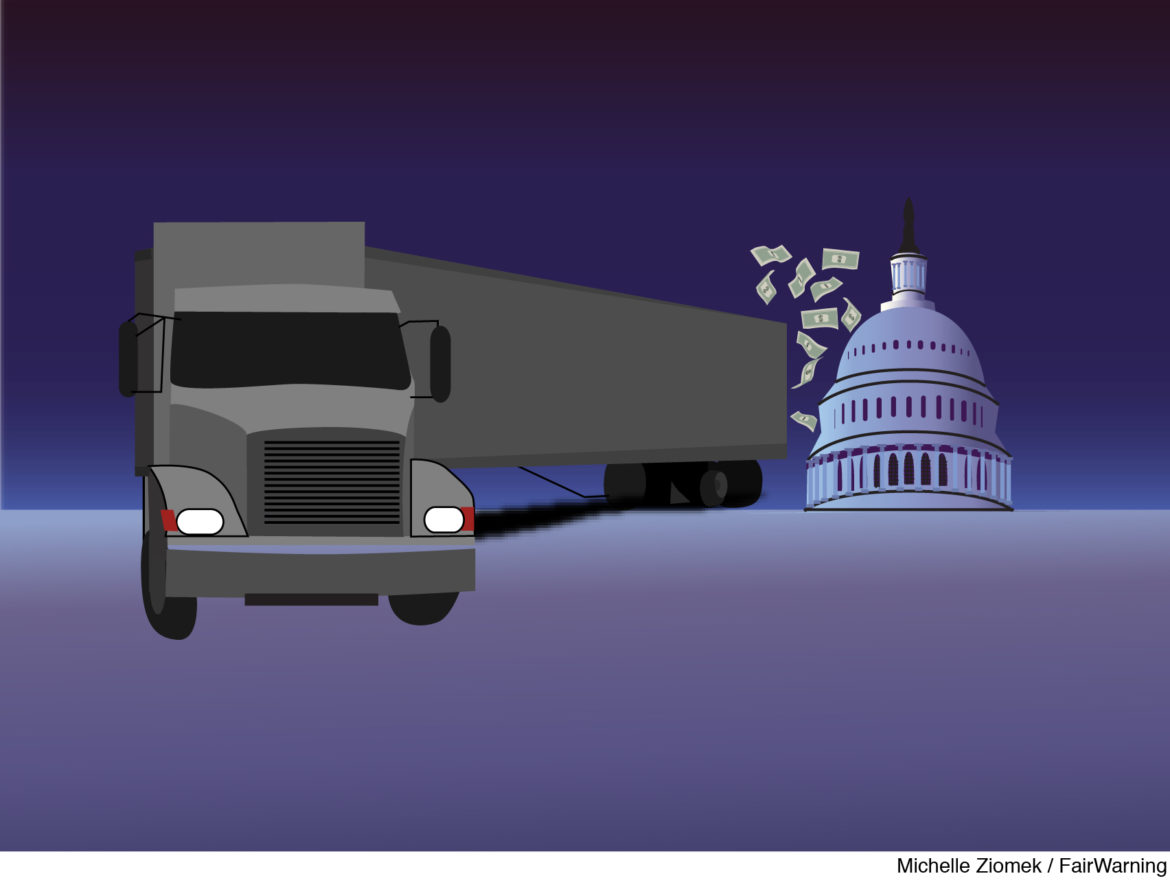 Given these numbers, you might expect Congress to be agitating for tighter controls on big rigs. In fact, many members are pushing for the opposite — looser restrictions on the trucking industry and its drivers.

The proposals represent a wish list of the trucking industry, including allowing significantly longer and heavier trucks, and younger drivers. The industry spends heavily on lobbying and campaign contributions, giving largely to Republicans, who control both the House and Senate.

Truck safety advocates — many of whom have lost loved ones in big rig crashes — are dismayed over what they describe as the industry’s efforts to use Congress to achieve dangerous policy changes.

“It would be almost easy to give up,” said Kim Telep of Harrisburg. She said she became a safety advocate after her husband, Bradley, was struck and killed by a big rig on the New Jersey turnpike in 2012. Telep says she’s tried lobbying Congress for tougher truck safety laws, but got a chilly response. “Sometimes they sit there with this blank stare on their faces. And I’m like, ‘Have you no empathy?’ ” she said.

Pennsylvania, Telep’s state, is home to Republican U.S. Rep. Bill Shuster, chairman of the House Transportation and Infrastructure Committee, which has jurisdiction over road safety. Shuster has taken more than $335,000 from trucking interests since the beginning of 2009.

In June, he voted for a massive transportation, housing and urban development appropriations bill that includes several of the trucking industry’s proposals, including one that would allow trucks nationwide to haul two 33-foot trailers, up from a current limit of 28 feet. That’s the equivalent of an eight-story building turned on its side and rumbling down the highway.

Other changes sought by the industry would:

It’s unclear if all, or any, of the proposals will be approved, but several have passed out of the House or Senate as parts of larger appropriations or authorization bills.

What is clear is that the measures have gained traction after concentrated campaign giving by the trucking industry. Since the beginning of 2009, trucking interests — including Federal Express, UPS and the American Trucking Associations — have spent more than $19.6 million on campaign contributions to members of Congress, according to data from the Center for Responsive Politics.

More than 70 percent of that money went to Republicans.

Trucking interests also spent more than $181 million on lobbying over that period, with FedEx alone accounting for $98 million.

Said Jackie Gillan, president of Advocates for Highway and Auto Safety: “We have special trucking interests pushing legislation that will result in overweight, oversized trucks being driven by overworked, underage truck drivers that are inadequately insured. All this with the backdrop of truck crash deaths and injuries climbing significantly and steadily.”

The trucking industry is divided over some of the proposals. For example, Federal Express and UPS want twin 33-foot trailers to be approved, but small, independent operators oppose the measure because it would require them to purchase new equipment.

“We believe that if the [proposals] come to pass that they will improve, not degrade, safety,” said Sean McNally, spokesman for the American Trucking Associations, which formally supports many, but not all, of the proposals before Congress.

The Federal Motor Carrier Safety Administration, the branch of the Transportation Department that regulates truck safety, declined to comment on the proposals before Congress. The trucking industry claims the proposals have been vetted, pointing largely to studies funded by the industry itself.

Critics, however, say the proposals have not been subjected to review by impartial experts. They say steamrolling looser restrictions through Congress, with heavy lobbying and contributions, is not the way to regulate public safety.

“There’s no logical reason why this would make our streets safer,” said Laurie Higginbotham of Memphis, Tenn. She said her 33-year-old son, Michael, was killed when his Jeep Cherokee plowed into a tractor-trailer making an illegal U-turn on a dark stretch of road in November 2014.

One of Higginbotham’s senators, Lamar Alexander, a Republican, has taken more than $112,000 from trucking interests over the last six years. Twice this year, he’s voted for bills that include provisions loosening rules on big rigs.

Higginbotham said she tried asking the Tennessee senator’s staff how he thought these changes would help the public, but didn’t get very far. “They didn’t have an answer, other than ‘Well, maybe we’ll have less trucks’” on the road, she said.

Thirty-nine states prohibit trucks from hauling double 33-foot trailers. The legislation would preempt those state bans on double 33s, permitting trucks of that length to travel across the country.

“It would eliminate the number of truck trips by about 6.6 million and eliminate miles traveled by 1.3 billion,” said McNally of the American Trucking Associations. “And trips not taken, miles not traveled, means crashes not had.”

He put the number of truck crashes likely to be eliminated at 900 a year.

Tucked into a separate transportation authorization bill, already approved by the Senate, is the pilot program to lower the minimum age of interstate truckers. Current federal rules prohibit truckers under the age of 21 from driving big rigs across state lines.

However, 49 states allow truck drivers as young as 18 to operate big rigs within their state borders, even though research shows that young truck drivers have more fatal crashes than more experienced drivers.

U.S. Sen. Deb Fischer (R-Neb.) has proposed a six-year pilot program that would allow states that border each other to form voluntary compacts permitting truckers as young as 18 to drive from one state to the other. Fischer, who has taken more than $96,000 from trucking interests since the beginning of 2011, didn’t respond to requests for comment.

The trucking industry says this proposal is critical because it is facing a shortage of drivers, and many young people who might want to become professional drivers can’t wait until age 21 to start their careers. Safety advocates, however, say the proposal is courting danger.

“My son at 18, I don’t think he would have been mature enough to drive a truck,” said Dorothy Wert of Montrose, a borough in Northeast Pennsylvania. “It’s not as easy as people think driving those big trucks.”

Wert says her husband, David, was a truck driver for 35 years. Early one morning in May 2011, she explained, her husband was driving down a dark highway. Up ahead, an inexperienced truck driver had broken down, leaving his truck in the middle of the road, with no warning signals or flares. Dorothy Wert said her husband, driving 65 miles per hour, didn’t see the other truck until the last moment. He swerved, but hit his gas tank on the other truck, igniting his rig on fire.

When he was pulled from the wreckage, David Wert had lost his feet and his skin was severely burned from the neck down. He later died.

Since the beginning of 2009, he has accepted more than $229,000 in campaign contributions from the trucking industry. But he also took an interest in the story of Lisa Shrum, a Fayette, Mo., resident who says she lost her mother and stepfather in a crash involving a FedEx truck in 2006.

Shrum says she visited the Capitol twice this summer and on both occasions had brief conversations with Blunt about the accident and her opposition to the proposals. On the very same day as one of their talks, she says Blunt voted for one of the bills containing trucking provisions.

Congress has yet to act on other trucking bills. In March, Rep. Lou Barletta (R-Pa.) introduced a bill to remove truck safety ratings from the Federal Motor Carrier Safety Administration’s website.

Since the beginning of 2009, Barletta has accepted campaign donations from the trucking industry totaling more than $52,000.

Barletta said in a statement that he introduced his bill because “the safety scores are flawed.” His position was backed up at least partly by the Government Accountability Office. The scores are calculated using data collected from roadside inspections and crash investigations, but the GAO discovered that most carriers’ vehicles are inspected infrequently, yielding too little information to produce reliable scores. The scores are available at https://ai.fmcsa.dot.gov/sms/.

Truck safety advocates, however, say if the scores need to be fixed, they should be fixed while they’re still online.

In mid-October, the House Committee on Transportation and Infrastructure approved a $325 billion highway bill that includes proposals to take the safety scores off the Internet and permit truck drivers as young as 19½ years old to drive between states.

‘A sad state of affairs’

Officials from several states have urged Congress to reject these proposals.

In June, two Pennsylvania state senators  wrote to all 20 members of the delegation to oppose an increase in federal limits on truck size and weight. Nine Pennsylvania representatives voted for an appropriations bill that authorized double 33s and nine voted against, while the state’s two senators have not yet had a chance to vote on the proposal.

Also in June, the Mississippi Transportation Commission passed a resolution opposing the push to preempt the state’s ban on double 33s, to extend truckers’ work weeks to 82 hours and to block higher insurance minimums for big rigs. Even so, four Republican Congressmen from Mississippi voted for bills including those provisions.

In Illinois, state senators approved a resolution rejecting an increase in truck size and weight. But their, Mark Kirk, a Republican, cast a committee vote for an appropriations bill including a provision for double 33s. Kirk has taken more than $38,000 from the trucking industry since the beginning of 2009. He didn’t respond to requests for comment.

Safety advocates say they’re afraid their message will be ignored. Said Jane Mathis of St. Augustine, Fla., the newly elected vice president of the Truck Safety Coalition: “It’s not looking good for safety people. I think most of this stuff is going to pass.”

Mathis said her 23-year-old son and his new wife were killed in a truck crash on their way home from their honeymoon in 2004. The newlyweds were stopped in traffic on the freeway in Florida when a trucker fell asleep at the wheel and rear-ended their car, Mathis said, which became pinned under the truck and exploded.

Mathis, a determined advocate for stronger safety standards, said that in the days after the crash, her home was filled with flowers from both her son’s wedding and funeral. She cries when she remembers visiting her son’s newly purchased home after the crash and finding her daughter-in-law’s wedding dress still laid out on the bed.

“We just have our stories and our facts, but we don’t have any money,” she says. “It’s a sad state of affairs.”