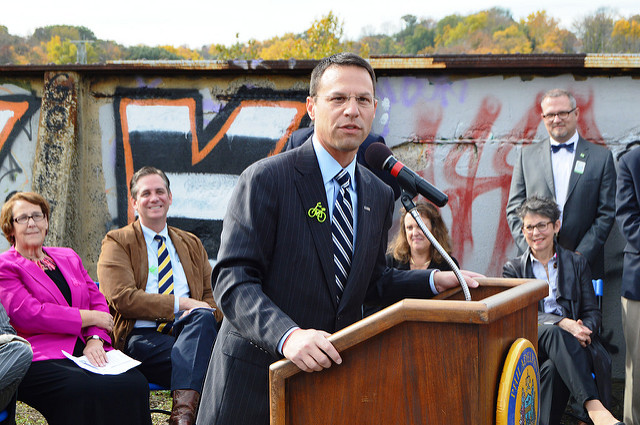 More than $6.2 million has been raised by the five candidates for Pennsylvania attorney general ahead of Tuesday’s primary.

Nearly all of that — more than $5.6 million — was raised by the three Democratic candidates, according to state campaign finance data current as of April 19.

Candidates in both the Democratic and Republican primaries are seeking to replace embattled Attorney General Kathleen Kane, who is not running for a second term. She has been charged with perjury, obstruction of justice and other crimes resulting from the leak of secret grand jury information to a Philadelphia newspaper.

An Associated Press investigation found Kane has also been using private email accounts for official attorney general business, which is a known security risk and against the office’s policy.

Democrat Josh Shapiro, a Montgomery County Commissioner and chairman of the Pennsylvania Commission on Crime and Delinquency, led all candidates with nearly $2.9 million raised.

He was followed by Democrat Stephen Zappala, Allegheny County’s district attorney for the past 18 years. He has raised more than $2 million.

On the Republican side, state Sen. John Rafferty (Berks-Chester-Montgomery) raised more than $500,000, and Joe Peters, a former drug trafficking and organized crime prosecutor, has raised almost $34,000.

Want to know more about what the attorney general’s office does and learn about the five candidates? Read our story that explains the responsibilities of the office and the skills needed from the next attorney general.

About $1.2 million of Shapiro’s money was transferred from a previous campaign account. He was a state representative for eight years from the 153rd district in Montgomery County.

His next highest campaign contributor was Students First PAC, an organization that supports school privatization, which gave $100,000 in March.

Other large donors include David Magerman (president of the Kohelet Foundation) and Michael Rubin (CEO of Kynetic, which owns brands such as Fanatics, Rue La La and ShopRunner), who each contributed $50,000 to Shapiro. Service Employees International Union and SEIU Healthcare have recently put their support behind Shapiro by contributing a combined $50,000 within the past two weeks.

Other notable contributions to Shapiro include $11,000 from Gov. Tom Wolf, who does not take a state salary; $3,000 from Jeffrey Romoff, the president and CEO of UPMC, and $1,000 from the Philadelphia Eagles.

The Zappala campaign ran out of money two weeks before the election and has been buoyed by $300,000 in loans from the candidate himself and more than $100,000 in recent contributions.

His campaign has received support from an influential Philadelphia contingent, including John Dougherty, who is the business manager of the International Brotherhood of Electrical Workers Local Union 98. The labor union has given Zappala $130,000. Several of Zappala’s other top contributors are unions.

Of the $727,000 that Morganelli raised, nearly $430,000 was transferred from a previous campaign committee.

His top individual campaign contributor was developer Abraham Atiyeh of Bethlehem Township, Pa., who contributed $25,000. Atiyeh has been in the news over the past four years for opposing development; suing Easton, Pa., over outdoor billboard space; and making a side deal with the Allentown School District.

There hasn’t been as much fundraising activity during the primary on the Republican side.

Rafferty raised more than $500,000, which was less than all three Democratic candidates. He also transferred $120,000 to his AG campaign from his state Senate campaign committee.