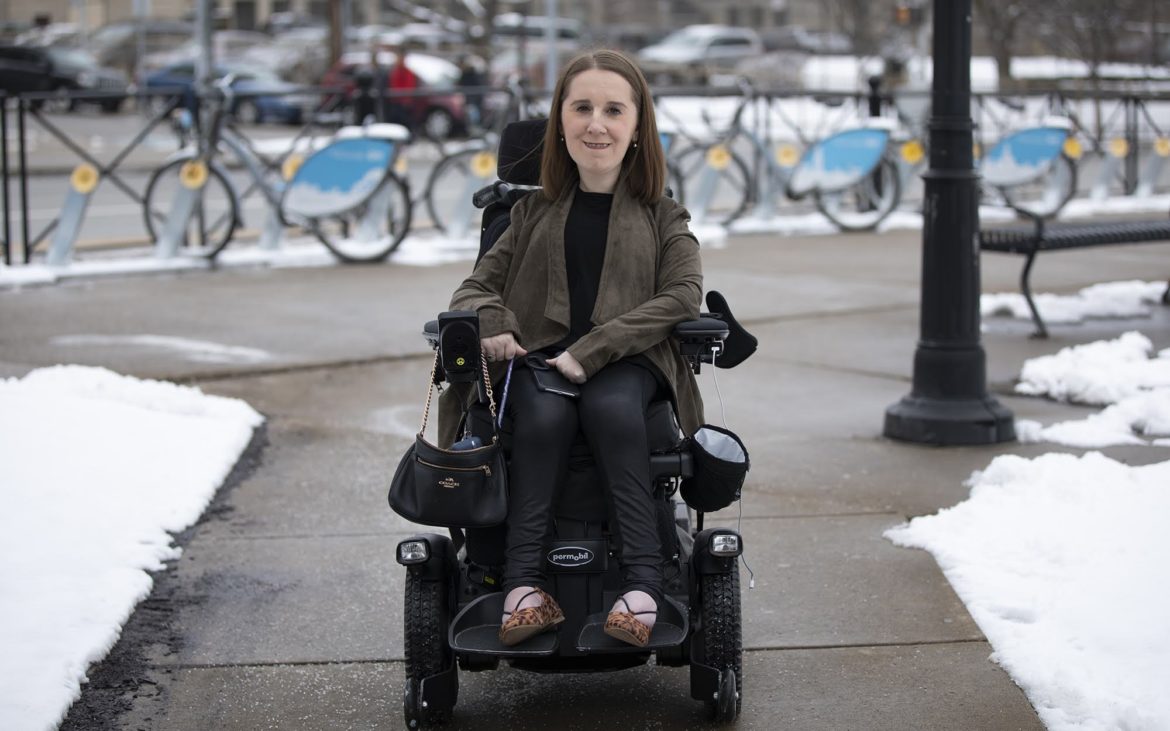 Heather Tomko has used a wheelchair since she was about 3 years old. In a city that champions itself on diversity and inclusion, she feels that there is still work to do when it comes to accessibility. (Photo by Kat Procyk/PublicSource)

Having spinal muscular atrophy means that I’ve never been able to walk. I’ve used a wheelchair since I was about 3 years old. I rely on help from others for many parts of my day — bathing, getting dressed, making my meals and just generally getting around.

I still try to be independent however I can. Growing up, I went to public school and took classes with my peers. I lived in the dorms with the rest of the students in college. I work as a research coordinator at the University of Pittsburgh and am pursuing my master’s degree in public health.

But for most of my life, I’ve had to learn to get around in a city, and a society, that is not very accessible to me. Pittsburgh has been doing a lot of work to make itself a city that champions diversity and inclusion. It’s also gained national attention as a place of innovation, where new residents and visitors can see how old neighborhoods are redeveloping.

Yet with all these changes and new attention, I don’t feel that the city always takes disability into account.

Something as simple as a trip to a coffee shop can be filled with obstacles.

I have specific paths I need to take when I’m navigating my wheelchair in Oakland and paths that I avoid at all costs. I have a map in my head of which sidewalks have the least cracks for my wheelchair to pass. Drivers of cars worry about potholes on roads, but I worry about the equivalent on the sidewalk. I will wait an extra turn at a crosswalk if it means I’ll be taking the flatter path to my destination, rather than the turbulent one.

If it snows, the city’s plows often push huge piles of snow right into the curb cuts that I use to cross the street. I may end up having to walk outside in the cold an extra block or two until I find one that’s clear enough for me to use.

Then, when I get to the coffee shop, I have to wait outside until someone else walks by and I can ask them to let me in. There’s no automatic button for me to press.

The Americans with Disabilities Act (ADA) of 1990 guarantees my rights to access. It requires places like schools, restaurants, stores, even sporting arenas, to make reasonable accommodations for me so that I’m able to use them. And there’s no grandfather clause in the law, so older buildings are covered just like newer ones. If this is all true, and the ADA was enacted almost 30 years ago, you may be wondering why I’m still encountering so many places that are inaccessible to me.

Yes, Pittsburgh is an old city and a geographically challenging one, too. Entrances to older buildings have a step, or a few steps, to get in. That’s a problem for my wheelchair. But it’s not only older establishments posing problems.

I’ve also encountered new or newly renovated buildings that are still inaccessible. For instance, Steel Cactus in Shadyside requires climbing a flight of stairs to enter. I’ve learned the hard way that I have to confirm the accessibility of each and every single new restaurant I want to try. There is nothing worse than being excited for a night out only to get there and find out you can’t get in.

Adam DeSimone, one of the owners of Steel Cactus, explained that the company spent 15 percent of renovation costs on accessibility, including accessible bathrooms, and that the restaurant is in compliance with building code for accessibility. “Our South Side location does have an elevator and is wheelchair accessible,” DeSimone said. 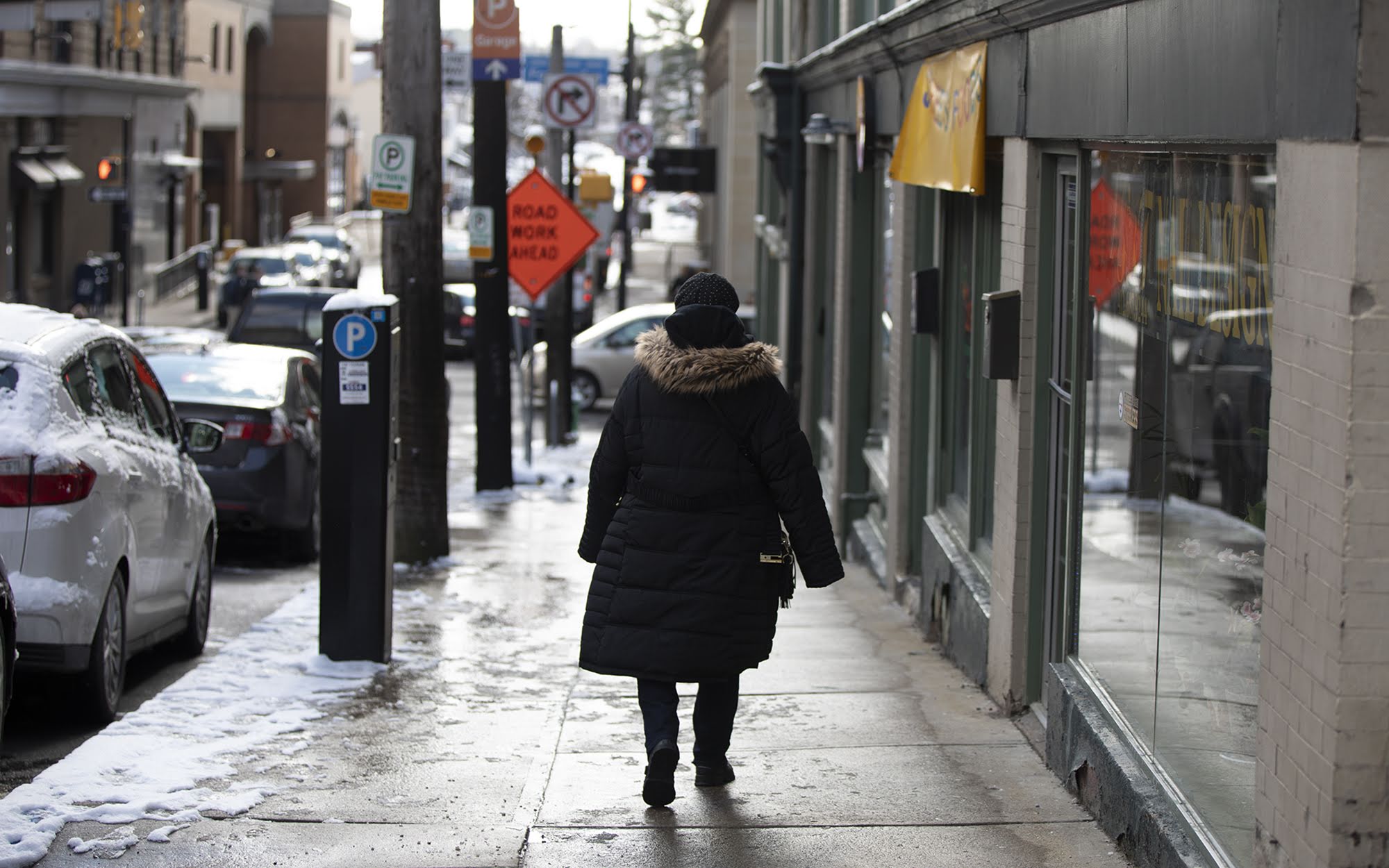 Sidewalks and street crossings in Pittsburgh can be difficult to navigate in a wheelchair without extra planning. (Photo by Kat Procyk/PublicSource)

Yet an accessible bathroom doesn’t help me if I can’t get in the building, and an elevator at the South Side location doesn’t do much for me if my friends and I are looking for somewhere to eat on Walnut Street.

Imagine standing outside a restaurant on a rainy Saturday night, scrambling to find a nearby alternative that is accessible and isn’t fully booked. As a senior in college, I learned that many of the bars that my classmates were going to in Oakland and on the South Side simply weren’t options for me.

Unfortunately, protections under the ADA are vague. The law requires reasonable accommodations to be made, but doesn’t specify what “reasonable” means. If someone with a disability comes across an inaccessible building, their options are to sue or to file a federal complaint with the U.S. Department of Justice. The onus is all on the person with a disability to enforce compliance.

But just following the ADA is not enough.

As explained by Jess Benham, the director of public policy at the Pittsburgh Center for Autistic Advocacy, the standards set by the ADA are pretty low. She noted that the law is important “but doesn’t really guarantee the rights of people with disabilities the way people think that it does.”

For example, the ADA allows a restaurant to put the accessible entrance around the back, where I have to go through the kitchen just to get to my table. This meets the letter of the law – I’m able to access the restaurant and have a meal there – but it does not make me feel like a valued customer.

As a college student, I loved going to a noodle restaurant in Oakland, but I had to send a friend to the front entrance to ask the host to unlock the delivery door, where I was waiting.

"I don’t feel that the city always takes disability into account."

“We need to go beyond the ADA,” Benham said. “...and it’s also about attitudes and stigma. Are we treated with respect or treated as lesser than?”

Market Square was recently overhauled to make it a pedestrian oasis of sorts but does not seem to take wheelchair-using pedestrians into account. There are curb cuts, but the paths are mostly cobblestone ones. For me, that’s the bumpiest, most uncomfortable ride, and I will actually go out of my way in the square if it means that I can avoid even 15 seconds of cobblestone. The ADA doesn’t specifically mention cobblestones, of course, but I don’t think of Market Square as the paragon of accessibility for someone with mobility issues.

Some businesses include accessibility during remodeling but don’t seem to understand what it actually means. Local disability advocate DJ Stemmler ran into this exact situation a few years ago at Sushi Fuku in Oakland.

The building required patrons to climb a single step to get into the building. When Stemmler posted about the lack of accessibility on a Facebook page she runs, the owner was upset – he had made the inside of the building fully accessible and didn’t understand why he was being called out. The two spoke at a meeting of Accessible Oakland, an advocacy organization co-founded by Stemmler.

The owner offered to carry her wheelchair up the step, but when Stemmler explained that it was too heavy and a safety issue, he seemed to understand. “We looked each other in the eye across the table and, at that moment, he understood the problem, and we understood that he wasn’t the problem,” Stemmler said.

He bought a temporary ramp to make the location accessible to wheelchair users and then worked through the city permit process to get a permanent ramp installed.

“Working with DJ, I learned that a business needs to be accessible from the outside to the inside,” Yen said. “It made me fully aware of accessibility situations.”

He has since ensured that all of his businesses, two Sushi Fuku locations and Fuku Tea, are fully accessible. 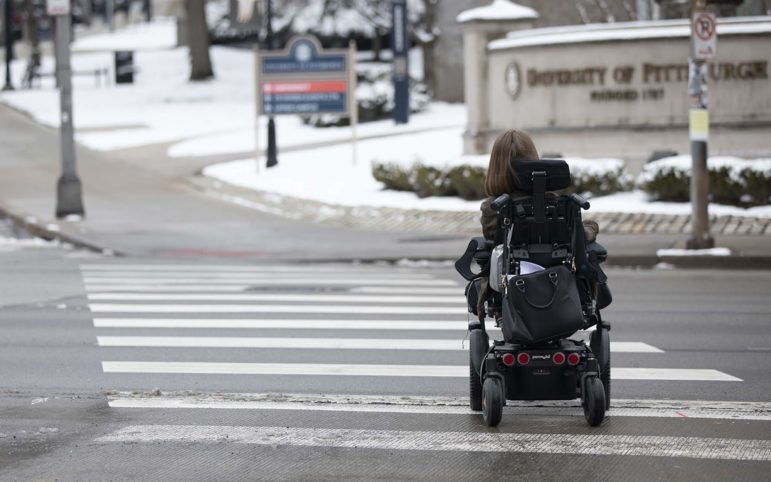 As Pittsburgh changes, Heather Tomko feels that some businesses are still forgetting to fully think about accessibility. (Photo by Kat Procyk/PublicSource)

“Business owners typically feel blindsided after they receive a complaint,” Stein explained, “and they say that they’ve already gotten a city permit.”

Josie Badger, the campaign manager for the #IWantToWork advocacy campaign, said businesses may be meeting the letter of the law, but they’re often lacking common sense. She cited the example of putting an accessible bathroom in a building that is not wheelchair accessible because it requires a step to get in.

“A consultancy of people with disabilities would be great to see, not just on the ADA but on actual usability and feasibility,” she said. “It’s not the laws that create access; it’s the people.”

Badger pointed out that a few places in the city champion inclusion, including the Warhol Museum, which has tailored tours and events like inclusive silent discos to be accessible for visitors with sensory issues and autism. “What they’ve done is outstanding,” she said.

Pittsburgh’s government has made efforts to improve accessibility, and Richard Meritzer served as ADA coordinator beginning in 2007 until he died in February. Meritzer championed the “One Step” program, which provides resources to businesses to remove barriers to entry. Tim McNulty, spokesman for Mayor Bill Peduto, said the city’s planning department is studying the position and expects to seek new candidates in the spring.

“The coordinator has long worked closely with the Mayor's Office and will continue to do so in the future,” McNulty wrote in an email.

Stein said she believes the one-step barrier is the No. 1 issue to address moving the needle on accessibility in the city. Pittsburgh’s Urban Redevelopment Authority [URA] evidently appears to agree.

The URA board voted in February to waive the guidelines of the Storefront Renovation Program (SRP) to allow for accessibility improvements in line with the One Step program. Previously, the funding from the SRP was allocated to improve the physical appearance of a storefront.

Tom Link, director of the URA’s Center for Innovation and Entrepreneurship, explained that the authority saw the need for accessibility renovations and that this waiver would provide direct funding to help with accessibility.

Benham said Pittsburgh has made improvements but still has a long way to go.

“Success will come when we can acknowledge that disability exists, but not discriminate against it, and when people with disabilities are able to find jobs, be represented in places of power, find affordable housing and be as successful in education as their able-bodied peers,” Benham said.

Pittsburgh is developing rapidly. But I don’t see people with disabilities being considered in these changes until it’s too late.

Take for example the bike lanes that take away handicapped parking spots. Progress on one front that takes away from another group isn’t real progress.

Pittsburgh constantly touts its status as one of the most livable cities in the nation. For people with disabilities, that’s still far from being true.

Heather Tomko is a public health researcher and the founder of Accessible YOUniverse (www.accessibleyouniverse.org). She can be reached at heather.tomko@gmail.com.