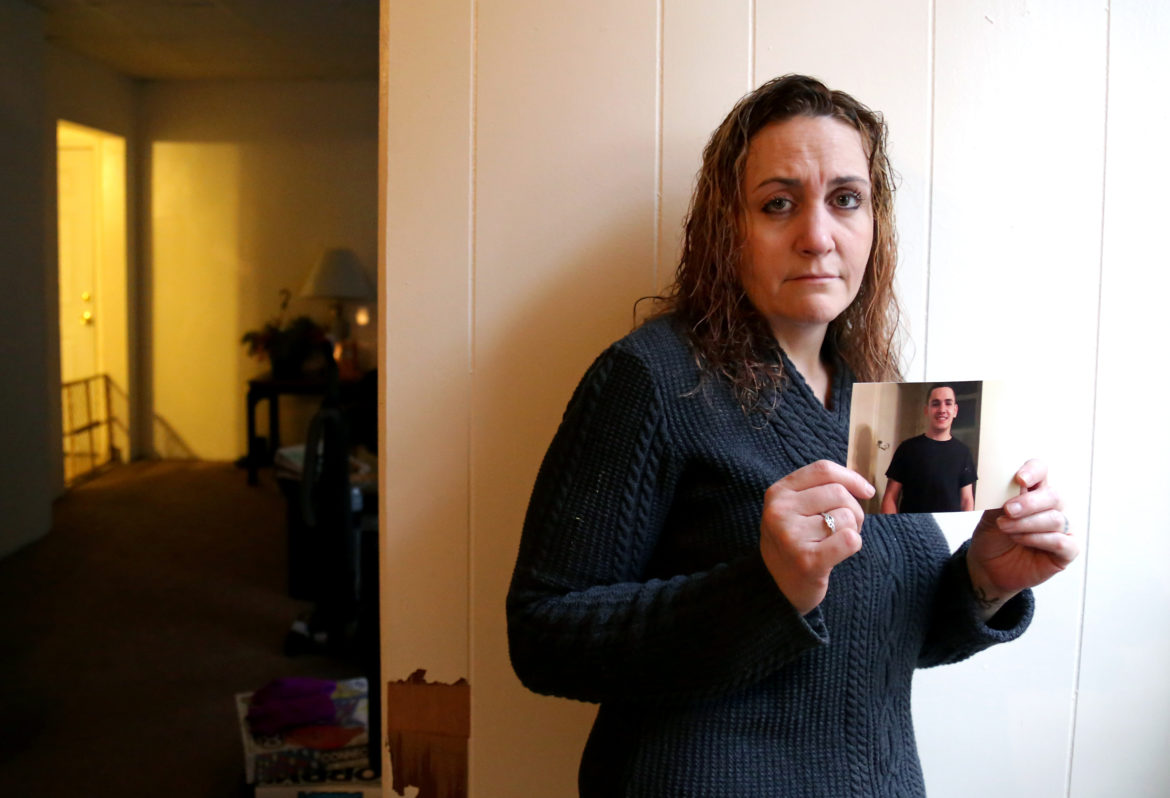 Kelly Davern-Fields' 19-year-old son, Cassidy, was found shot to death in a vacant Homewood lot on Oct. 22, 2016. No arrests have been made in the case. (Photo by Guy Wathen/PublicSource)

Update: On Jan. 23, 2017 Floyd Beard of Homewood turned himself into the Zone 5 police station for his alleged role in the murder of John Cassidy Davern. Police issued a warrant on Saturday, Jan. 21. Beard has been charged with criminal homicide, robbery and carrying a firearm without a license. Cassidy’s family believes two other individuals were involved in the murder.

Cassidy will not be joining his family to celebrate his brother’s birthday this year.

His loved ones gather in the dining room, but they are venting, more than celebrating. Cassidy was a boisterous, gullible, geeky but tough-acting teenager. He was just 19. His family struggles to get used to Thanksgiving, Christmas and now Justin’s birthday without him, and they are puzzled why the police still haven’t solved his murder.

“They talk to you like you’re like pestering,” says Justin, now 26, explaining how little they hear from Pittsburgh police.

“Like you’re bothering them,” adds Cassidy’s fiancée, Casey Morton, 21. She’s eight months pregnant with their son, who will have the first of many birthdays without his dad.

The big question remains unanswered. Will the family see any justice? Or will another month pass with little progress in what they see as an open-and-shut case?

On Oct. 22, John Cassidy Davern was found lying in a vacant lot in Homewood. Shot twice in the chest, twice in the stomach, grazed by other bullets. He’d been left there for 10 hours. John Cassidy Davern, 19, was found shot to death in a vacant Homewood lot. His family believes they know who he was with that night, but police have been unable to make any arrests. (Photo courtesy of the Davern family)

The city’s ShotSpotter system detected gunfire at about 11 p.m. Oct. 21. But police didn’t find Cassidy until the next day.

“You’re riding down with a big flashlight, you can’t see a body sitting in a vacant lot,” his mother, Kelly Davern-Fields, says. “That doesn’t make sense to me.”

To the family, so much of it all doesn’t make sense.

Justin always assumed police solved murders. But that’s not the case. The city police solved only 29 of 59 murders last year. Cassidy’s case, which Justin describes as no “crazy mystery," is one of the 30 unsolved cases.

He’s perplexed that police can’t solve his younger brother’s case. They have the names of likely suspects and evidence they think undeniably shows Cassidy was lured to that lot in Homewood.

The family doesn’t think the police have any doubts about who’s involved. They themselves have none, but police told them recently that county prosecutors don’t think the case is strong enough to make arrests. Justin Davern's 19-year-old brother, Cassidy, was found shot to death in October 2016. His case is one of 30 unsolved 2016 homicides. Justin had his brother's name tattooed on his hand after his murder. (Photo by Guy Wathen/PublicSource)

A police representative did not respond to repeated requests for comment. Police would not even speak generally about unsolved cases from 2016. A representative from the Allegheny County District Attorney’s Office said he could not comment.

District Attorney Stephen A. Zappala Jr. recently explained that police and prosecutors often know who committed a crime, but knowing doesn’t mean much if the evidence isn’t strong enough to win a conviction.

“If you arrest somebody, you’ve changed their lives,” Zappala said, speaking generally about the process without mentioning any case. “You don’t make those decisions haphazardly.”

What exactly happened to Cassidy is unclear.

Justin explains that his brother was lured to Homewood by a supposed friend who’d been bothering him all day about buying marijuana.

So around 11 p.m. on Oct. 21, Cassidy left the family home in south Pittsburgh with about an ounce of weed, and a portion to smoke himself. It was supposed to be a quick sale. There and back home.

Cassidy’s family believes he picked up the friend and two others who intended to rob him.

That much they’re sure of, but they don’t know how things escalated.

“All we can do is just sit here and just think of different ways it could have went down,” Casey says.

She knew something was wrong around midnight.

“We started blowing up everybody, like all his friends,” she says of the frantic search for information. Around dawn, she finally heard from the person Cassidy was supposed to be with, but the reply didn’t give answers. Casey Morton said she knew something was wrong the night of Oct. 21 when her fiancée, John Cassidy Davern, didn’t come home. She and his family found out the next day he had been shot to death in Homewood. Morton is due to have his son, John Cassidy Jr., at the end of February. (Photo by Guy Wathen/PublicSource)

That hasn’t been the family’s experience.

“I don’t know what they do though, these detectives,” Justin says. “All that information we got, we got ourselves.”

They found evidence that lays out the sequence of events, his mom says, and shows how her son was set up.

Cassidy’s wallet wasn’t recovered at the scene, Justin says. Instead, Casey’s uncle found it by accident in Cassidy’s car after it had been impounded for weeks.

Cassidy had grabbed his mom’s cell phone before driving to make the deal. Police didn’t find it. She tracked it herself to a ditch by an abandoned home in Homewood.

So they wonder what else investigators missed.

Police told the family they were waiting on phone records, which they just learned became available after about two months. A murder weapon would be helpful, Justin says police told him. John Cassidy Davern's family put together this photo album of the teenager after his murder. (Photo by Guy Wathen/PublicSource)

Now the investigation is in its third month, and updates from police are sparse and disappointing.

Meanwhile, Kelly says she feels unsafe. The family moved to a walkable neighborhood so they could be outside, but she doesn’t want her kids walking up the street until her son’s killer is in jail.

Will that ever happen?

Justin remains hopeful something will eventually push the case forward. He doesn’t even care about a conviction. He just wants arrests.

But the family sees little noticeable effort from police, while they themselves seem to be pushing for answers. But then they’re told it’s never enough.