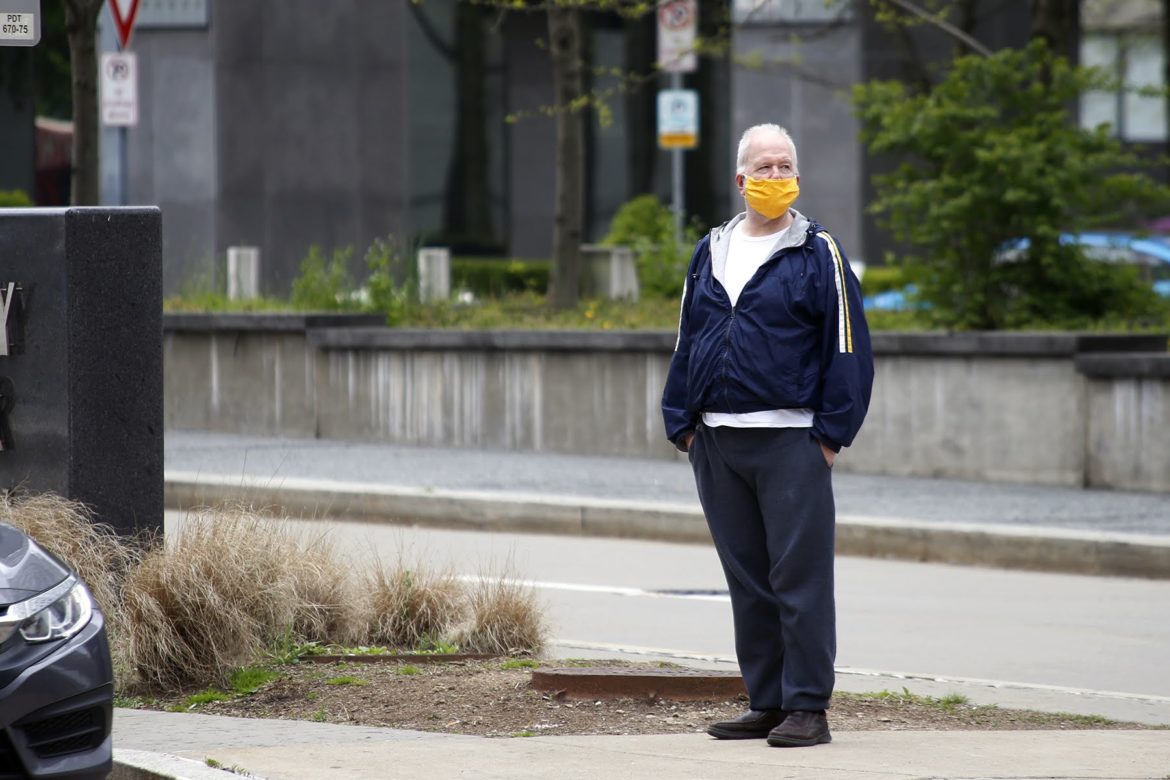 A person wearing a face mask stands near the intersection of Liberty Avenue and Stanwix Street in downtown Pittsburgh on April 29, 2020. (Photo by Ryan Loew/PublicSource)

Gov. Tom Wolf announced Friday that Allegheny County is among 13 counties that will move to the yellow phase of reopening on May 15.

“Residents should be mindful that yellow still means caution,” Wolf said at a press conference. “If a new case count begins to climb in one area, restrictions will need to be imposed to prevent local medical facilities from being overwhelmed.”

Allegheny is the most densely populated county to get the yellow light so far, though its coronavirus toll has been far less severe than that of the Philadelphia metropolitan area, which remains in the red phase.

Allegheny County Executive Rich Fitzgerald said in an interview with PublicSource Friday he’s pleased that the county will begin reopening but that the community is still at the beginning of the road to recovery.

“If you’re in a nine-inning game, we’re maybe in the second inning, and we have a long way to go,” Fitzgerald said.

In the yellow phase, the stay-at-home order that went into effect April 1 is lifted but strong mitigation measures are still in place. People are to continue to telework when possible; businesses with in-person operations must follow safety measures; and schools will remain closed along with theaters, bars, hair salons and gyms. Restaurants are still barred from offering dine-in service.

“I think there’s going to be a lot of challenges for a lot of businesses,” Fitzgerald said. “It’s going to be really important as people leave their house more frequently … to make sure that they keep that distancing, that they’re wearing their masks, to try to stagger work hours so not everyone is showing up at the same time.”

A decision hasn’t been made about the viability of public swimming pools, but Fitzgerald said operating them would be “very challenging.”

Even with the stay-at-home order lifted, Fitzgerald and Secretary of Health Dr. Rachel Levine have encouraged people to opt for remote socializing when possible.

“Even if you’re in the same space, if you go to the park or go outside, people can talk to each other but maintain physical distance. Wear your mask, 6 to 10 feet away.”

The announcement came as the state department of health announced 1,323 new COVID-19 cases and 200 new deaths.

One of the state’s criteria for counties to move to yellow was getting an average of daily new cases below 50 per 100,000 people for a 14-day period. Allegheny County has had an average of about 22 in recent weeks, well below the state limit.

Wolf and Levine have stressed that the metric is not the only criterion, and they are also looking at testing capacity, contact tracing, and population density, among others.

Wolf noted that the red-yellow-green system is not a “one-way route” and that the state will reimpose restrictions if “danger arises” in certain areas.

“We want to not only stay in the yellow but move toward the green,” Fitzgerald said. “There’s many businesses who will not be opened up in the yellow phase, and I feel for those folks.”

The state requires counties in the yellow phase to test 2% of their population over a 30-day period. For Allegheny County, that equals about 833 tests per day. County health director Dr. Debra Bogen said last week that the county has the capacity to test 2,000 people per day, though the actual number of tests conducted has been much lower. Fitzgerald said the county will test at least 833 people per day, likely more, once it moves to the yellow phase.

Once the new phase of reopening takes effect on May 15, 37 counties in total will be in the yellow phase, including much of the western half of the state. The other counties that will reopen on May 15 are Armstrong, Bedford, Blair, Butler, Cambria, Fayette, Fulton, Greene, Indiana, Somerset, Washington and Westmoreland. More than 2.5 million people live in the affected counties, in all.

Friday’s announcement was partially revealed early by a number of state senators. State Sen. Wayne Fontana, Democrat-Allegheny, told PublicSource Friday morning that he was almost certain the county would move to yellow. State Sen. Camera Bartolotta, a Republican, revealed in a Facebook post Thursday night that Washington and Greene counties would also be moving to yellow. Republican state Sen. Kim Ward wrote on Facebook that Westmoreland County would be changing status, too.

For counties in the red phase, Wolf extended the stay-at-home order until at least June 4.

Beaver County is the only county in the region to remain in the red zone; it is home to one of the most severe nursing home outbreaks in the state, with more than 60 deaths and 300 confirmed cases. U.S. Rep. Conor Lamb is calling for an investigation into how the facility, Brighton Rehab and Wellness Center, has handled the outbreak.

Officials at the Allegheny County-owned Kane Community Living Centers said Friday, May 8, that visitation will not resume until the county moves into the green zone, as outlined in the governor’s reopening plan. But even then, the screening protocols — temperature checks and health questions, among them — are expected to remain in place.

As of Thursday, May 7, 191 residents at the county’s four nursing homes have tested positive for COVID-19. Thirteen residents, all of whom resided at the Glen Hazel facility, have died.

Among staff, 45 have tested positive, of which 42 work at Glen Hazel. Kane Community Living Centers Director Dennis Biondo said 27 sickened staff members have since recovered and returned to work.

“It’s just amazing that they still come to work,” he said.

Charlie Wolfson is a freelance reporter in Pittsburgh and a senior journalism student at Northeastern University. He can be reached at wolfson.ch@gmail.com.